While its more opulent brethren, the S-Class, might be the flagship of the marque, the introduction of more compact sedans allowed the fourth-generation Mercedes-Benz C-Class W205 to make a leap closer to being a baby S-Class.

With the sedans in the A-Class range filling in the gap for more compact demands, the fourth iteration of the C-Class was free to take a leaf out of the S-Class playbook and raise the luxury stakes. Not that it needed it – the C-Class badge already held the mantle of being the distinguished gentleman’s choice among its German peers.

Although larger in every aspect, the W205 was the first model to use Mercedes’ all-new Modular Rear Architecture (MRA) platform that was significantly lighter, thanks to the extensive use of aluminum, resulting in an average reduction in weight of around 100kg to balance out the dimensional gains.

The W205 was launched here in September 2014 and was available in three variants – the C 200 Avantgarde, C 250 Exclusive, and C 250 AMG Line. At the time, they were all CBU units from South Africa. 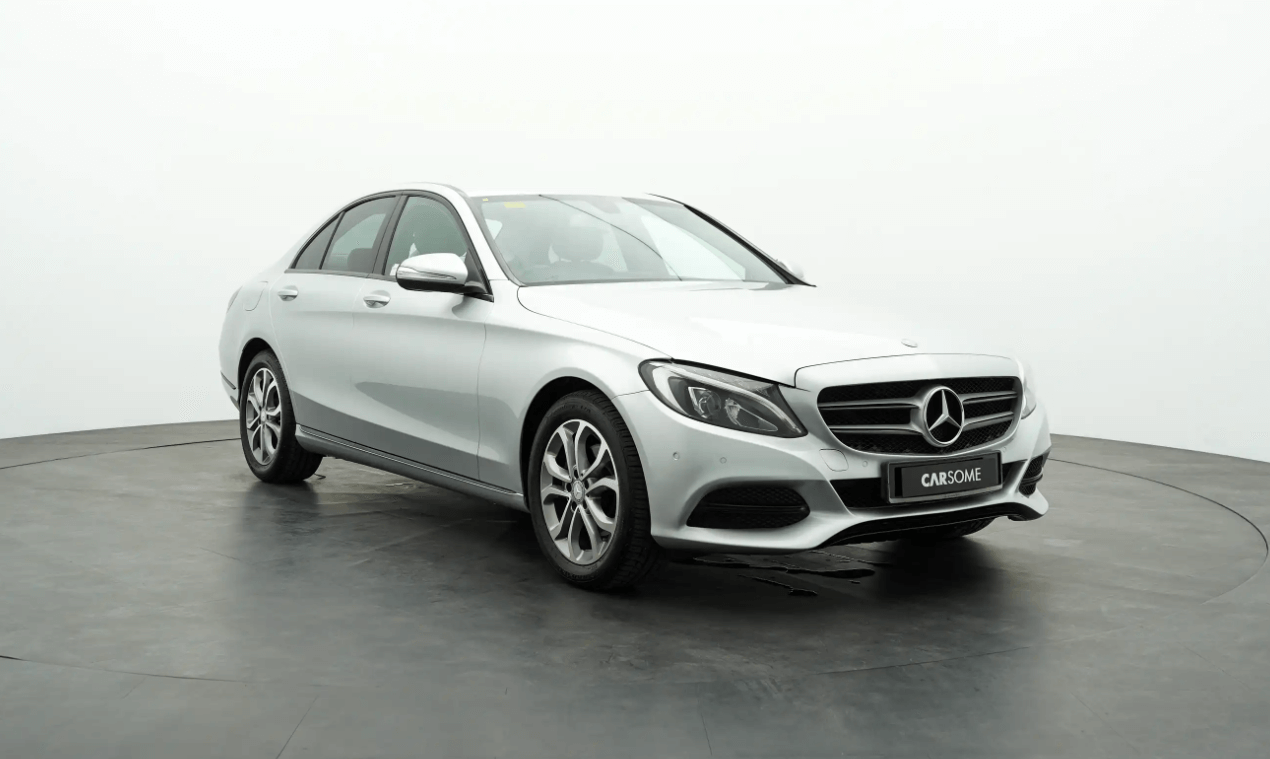 To tell them apart, the C 200 had a centrally mounted emblem on the grille while the C 250 benefitted from the iconic standing hood ornament with Airpanels; active louvers that open or close for aero efficiency.

Both variants had Agility Select (alters the steering weight, throttle response, and transmission maps) but the C 200 rode on an Agility Control suspension that’s lowered by 15 mm while the C 250 was a tad bit higher with its comfort setup suspension.

In April 2015, locally-assembled variants were introduced. Specs remained identical for the C 200 Avantgarde and C 250 Exclusive.

Almost a year later in February 2016, the C 200 Exclusive Line made its way here. Slotting between the C 200 Avantgarde and C 250 AMG Line meant cosmetically, it mimicked the C 250 with more elegant bumpers, the traditional grille, and that bonnet-mounted emblem. 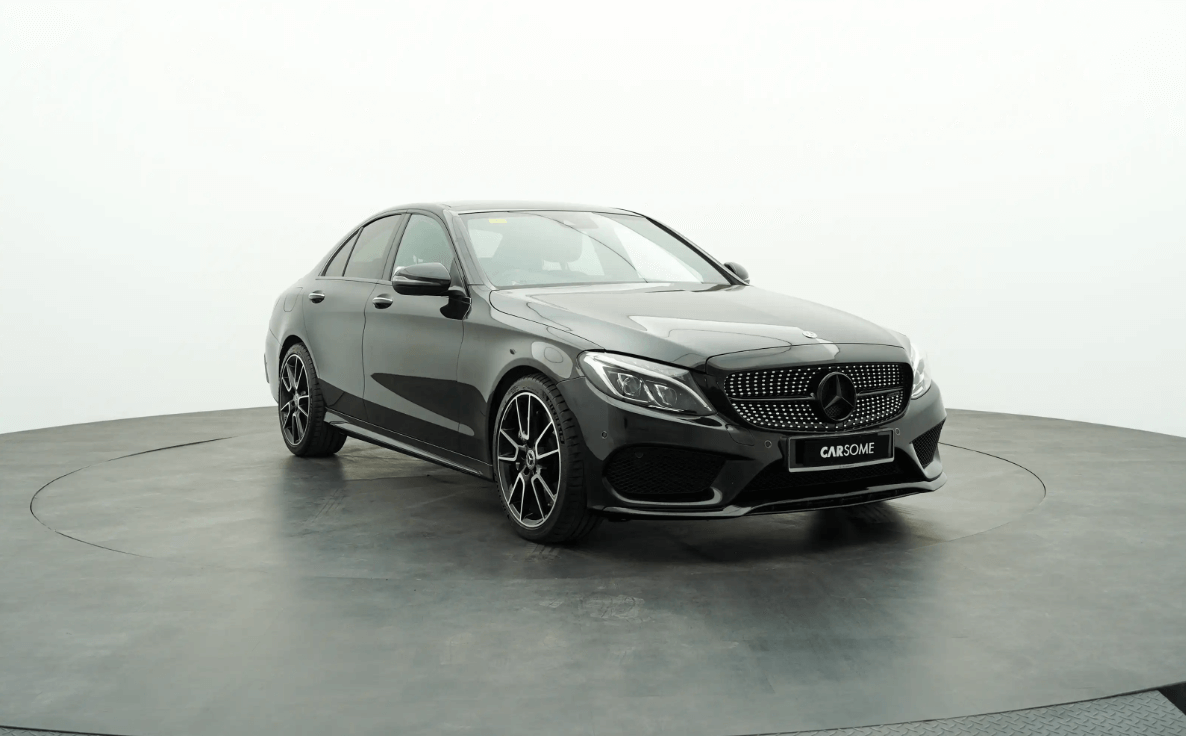 A month later, Mercedes-Benz Malaysia updated the C-Class range with two new variants that sat at both ends of the C-Class spectrum. The C 180 Avantgarde Line was now the most affordable C-Class. And if you had a taste for the finer things in life, the C 300 AMG Line was all you needed to bag an actual AMG model. Here are details of what’s offered in the C 180 and C 300 variants.

As the entry-level variant, the kit count rightly reflected that. It was mostly similar to the C 200 Avantgarde: you only got a single-zone air-conditioning system, no memory function for the powered seats, and no reverse camera but you did get Active Parking Assist.

Being the Mercedes-Benz C-Class range-topper, it was decked out in 19-inch AMG wheels, a sports exhaust system activated by Sport+ mode, triple-zone climate control, and a panoramic sunroof. The Sports suspension lowered it by 15mm and it did light the way forward with the LED Intelligent Light System headlights with Adaptive Highbeam Assist.

The most significant pre-facelift upgrade though was the launch of the all-new 9G-Tronic automatic transmission in April 2017.

While much lighter than the outgoing 7G-Tronic, the new transmission did negligibly increase fuel consumption but negated that with quicker sprinting and a higher top speed. 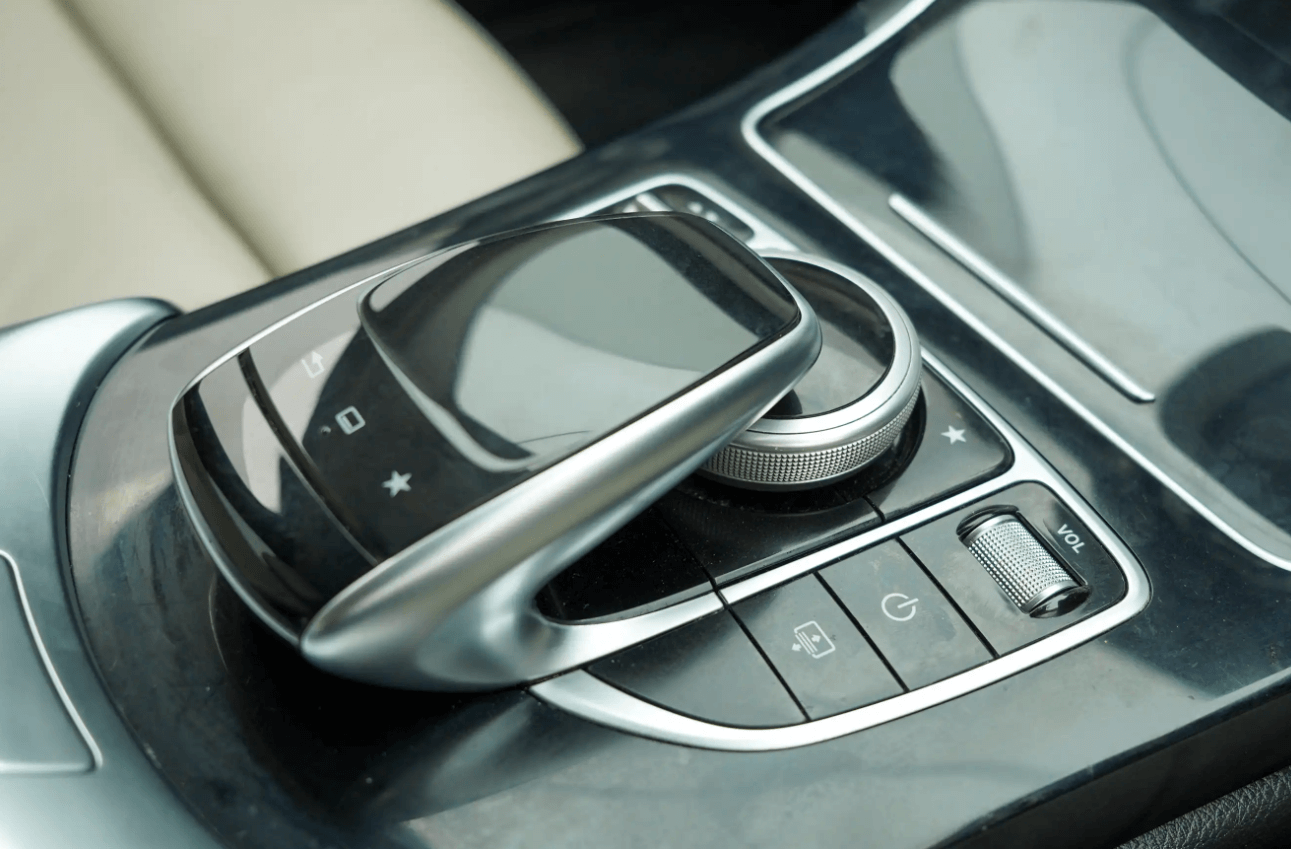 The swansong for the W205 came in November 2018 with the facelift. This time around, it was all locally assembled from launch. Only two variants were available in the form of the C 200 Avantgarde and the C 300 AMG Line.

Apart from some minor cosmetic revisions to the exterior, the biggest change was the Multibeam LED with 84 diodes and Ultra Range high-beam headlights for the C 300. At the aft, the LED taillights received new C-shaped guides for the light signature.

It wasn’t all cosmetic though as the range was now powered by new engines from the M264 family. The C 200 now had a little electrification to give an extra boost in performance. It got a smaller M264 E15 DEH LA 1.5-litre twin-scroll turbo inline-four engine that had 184 PS and 280 Nm of torque. To complement that, the EQ Boost 48V electrical system comprised a belt-driven starter/alternator that could dish out an additional 13 PS and 160 Nm of boost when required.

Both carried the 9G-Tronic transmission. 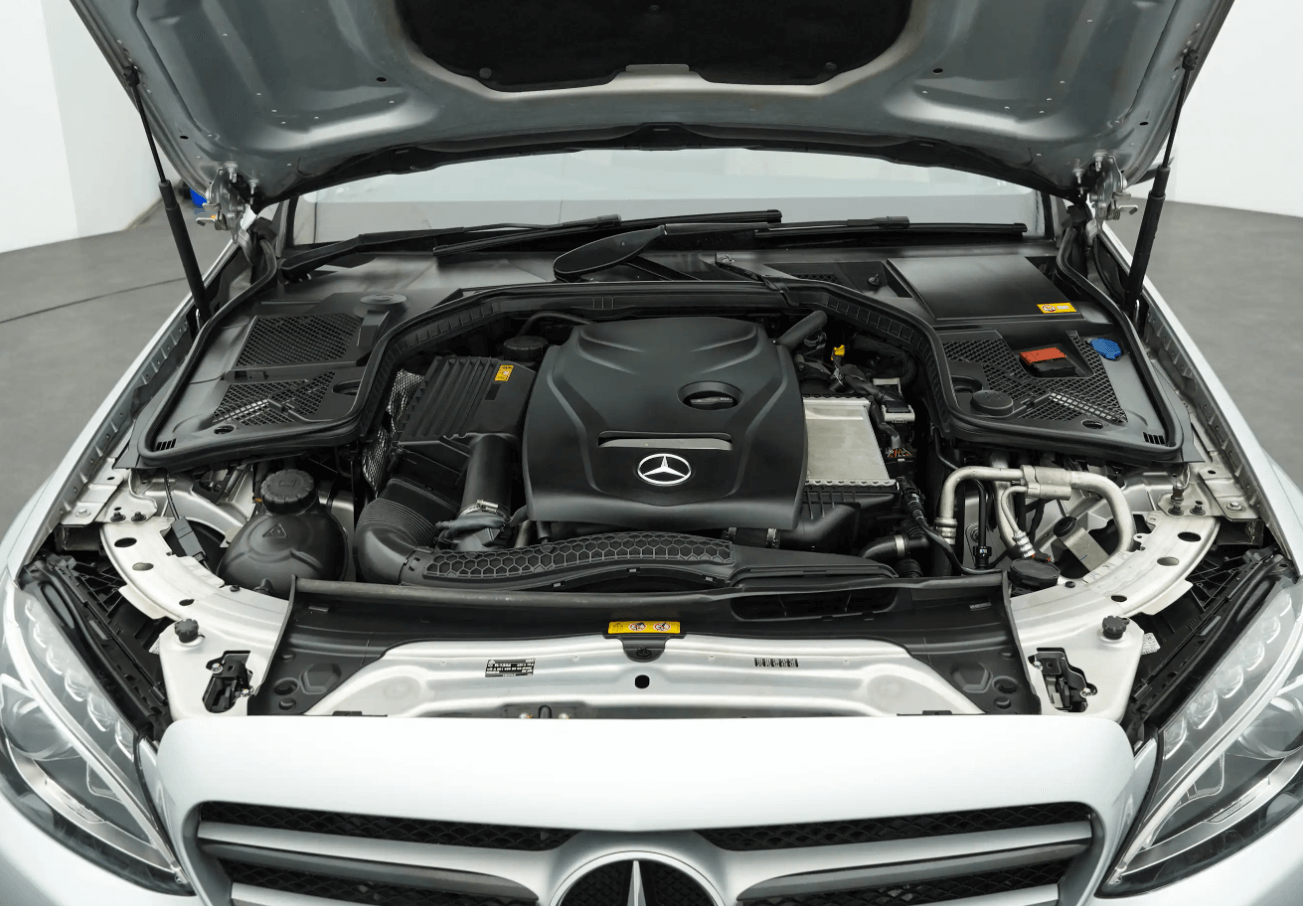 Inside, there was a new steering wheel, a larger 12.3-inch display, and a digital instrument cluster.

This facelift also finally brought keyless entry to the C 200 as well as Agility Control suspension.

As for the C 300, it rode on the more comfortable Airmatic suspension and packed active lane-keep assist that represented the first form of ADAS in the W205.

That wasn’t all she wrote though. In July 2020, the complex and pricey EQ Boost powertrain in the C 200 was retired in favor of a more traditional pure internal combustion setup. The transition happened with the introduction of the C 200 AMG Line that reverted to the same engine from the C 300 with detuned performance producing 204 PS of power and 300 Nm of torque.

The AMG Line moniker meant it got the AMG alloys, a stiffer version of the Agility Control set-up from the C 200 Avantgarde, and active cruise control.

Unlike its public enemy number one from Munich (that’s BMW in case you’re wondering), the offerings from Stuttgart tend to hold their value a little better in the used car market; much to the detriment of potential buyers. Nonetheless, they say you always get what you pay for.

From a little browsing online, there’s a fair mix of officially imported and reconditioned Mercedes-Benz C-Class units in the market although it leans more towards the latter.

Fortunately, the abundance of variants that were available throughout its run here means that pricing doesn’t stray much between the varying badges.

As for the C-Class facelift variants, you’ll find that pricing starts at a much higher RM200,000 and stretches all the way to RM280,000 for final year units.

Ultimately, it all depends on the features you’re looking for and the amount of kick when you floor the throttle. 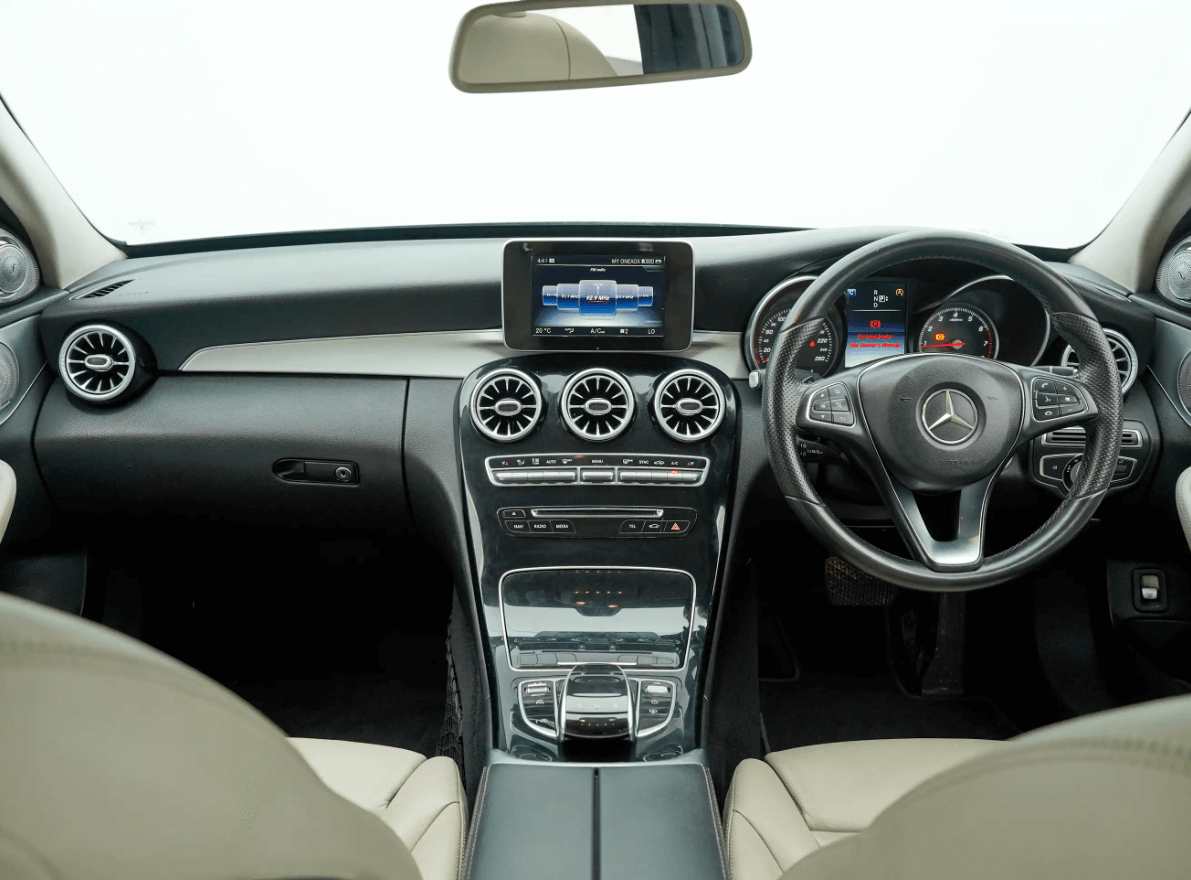 Which One to Get

For the most part, the W205 C-Class is pretty problem-free. That’s not to say it isn’t without some common handicaps but then again, there’s no perfect car. Still, almost all variants won’t cause you a headache, but we’ll have to draw the line at one particular one.

Whatever the price, it’s best to avoid the short-lived facelifted C 200 that came with the 1.5-liter engine and the EQ Boost hybrid assist. There have been cases of the hybrid system being problematic which is why they reverted back to a traditional internal combustion setup not long after.

As is the norm with most premium continental machines, it’s best to suss out the potential weak points prior to signing on the dotted line. Here, we spoke to Danny Tan. He runs an independent Mercedes-Benz specialist workshop Benze Elite Auto in Puchong.

He says that one of the most common problems with the W205 C-Class is a cooling coil leak in the air-conditioning system. The symptoms start with cool air only on one side of the vehicle before it stops altogether. You’ll need to replace the cooling coil, condenser, and expansion valve to remedy it. OEM parts will be in the region of RM3,000 while original ones will be about double that figure.

On the side of cooling but for the engine, the coolant system can also spring a leak via the thermostat. That’s going to set you back around RM1,000.

More common failures include the alternator and fuel pump which will set you back about RM2,000.

Undercarriage noises can be attributed to worn bushings and control arm joints. Your alternatives are to replace the bushing for around RM400 or replace the entire arm with an OEM piece for about RM500. If you’re all about the original parts, you’ll be looking at RM1,100 or so for each arm as they don’t sell the bushings on their own.

A well-maintained W205 C-Class might have a few years under its belt but will continue to serve you for many more to come. If you come across a unit without a full service history, that’s an immediate red flag.

With CARSOME Certified cars, you’ll never have to worry about it as every unit undergoes a full 175-point inspection for complete peace of mind.