The 4th Generation Honda City (GM6) was launched in Malaysia in 2014 and a total of four variants were available at the time (S, S+, E & V). It then went through a facelift in 2017, which dropped the S+ variant. The most notable feature for both the pre-facelift and post-facelift City are the six airbags offered in the top spec, V variant.

At the time, the City’s direct competitors were the Toyota Vios, Mazda 2, Nissan Almera and Volkswagen Polo/Vento but none of them came with six airbags and Honda Malaysia was generous to provide them as you can’t put a price on safety. 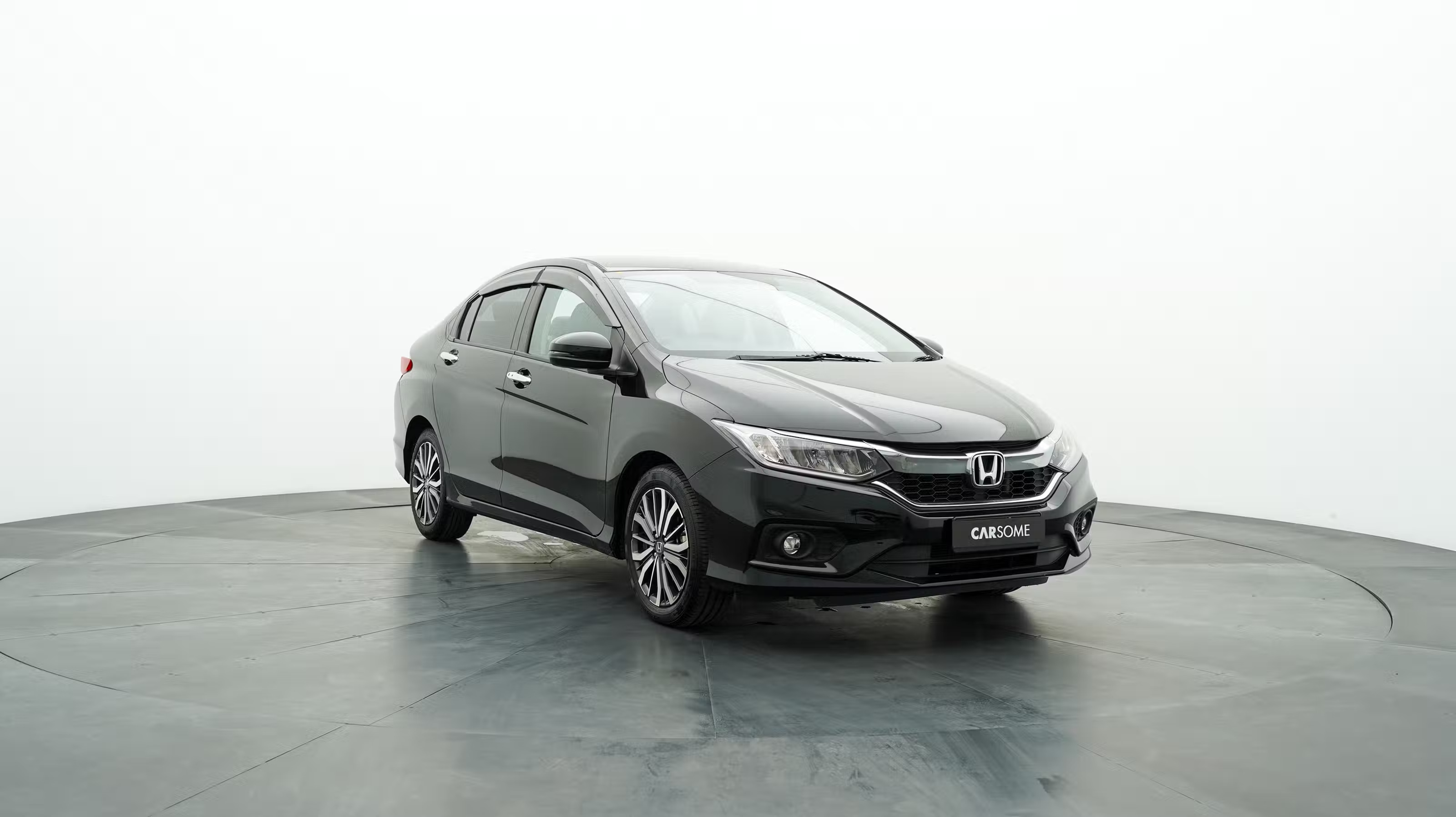 The pre-facelift Honda City prices were as follows:

The post-facelift Honda City prices were as follows:

The post-facelift Honda City has a lot more features that came as standard compared to the pre-facelift model. Standard features included for the convenience of the driver were keyless entry (which allows you to lock/unlock your car by pressing the button on the door handle), push-button start (starting the car with a push of a button instead of the outdated “insert and twist” method), reverse sensors, auto-retractable folding side mirrors with indicators, multi-info display, which provides information like your average petrol consumption, range of kilometers left, outside temperature, mileage, and a clock. It also includes Bluetooth connectivity, steering wheel audio controls, and Hands-Free controls as standard.

The engine remains unchanged, powered by a 1.5-liter i-VTEC engine (120 HP, 145 Nm) paired to a CVT gearbox, which is known to maximize petrol efficiency. Styling-wise, the post-facelift Honda City came with a redesigned exterior, redesigned headlights with LED Daytime Running Lights (DRL) and redesigned rims. For the V variant, it gets LED headlights, LED fog lights and a lip spoiler with an integrated LED brake light to make the car appear sportier. 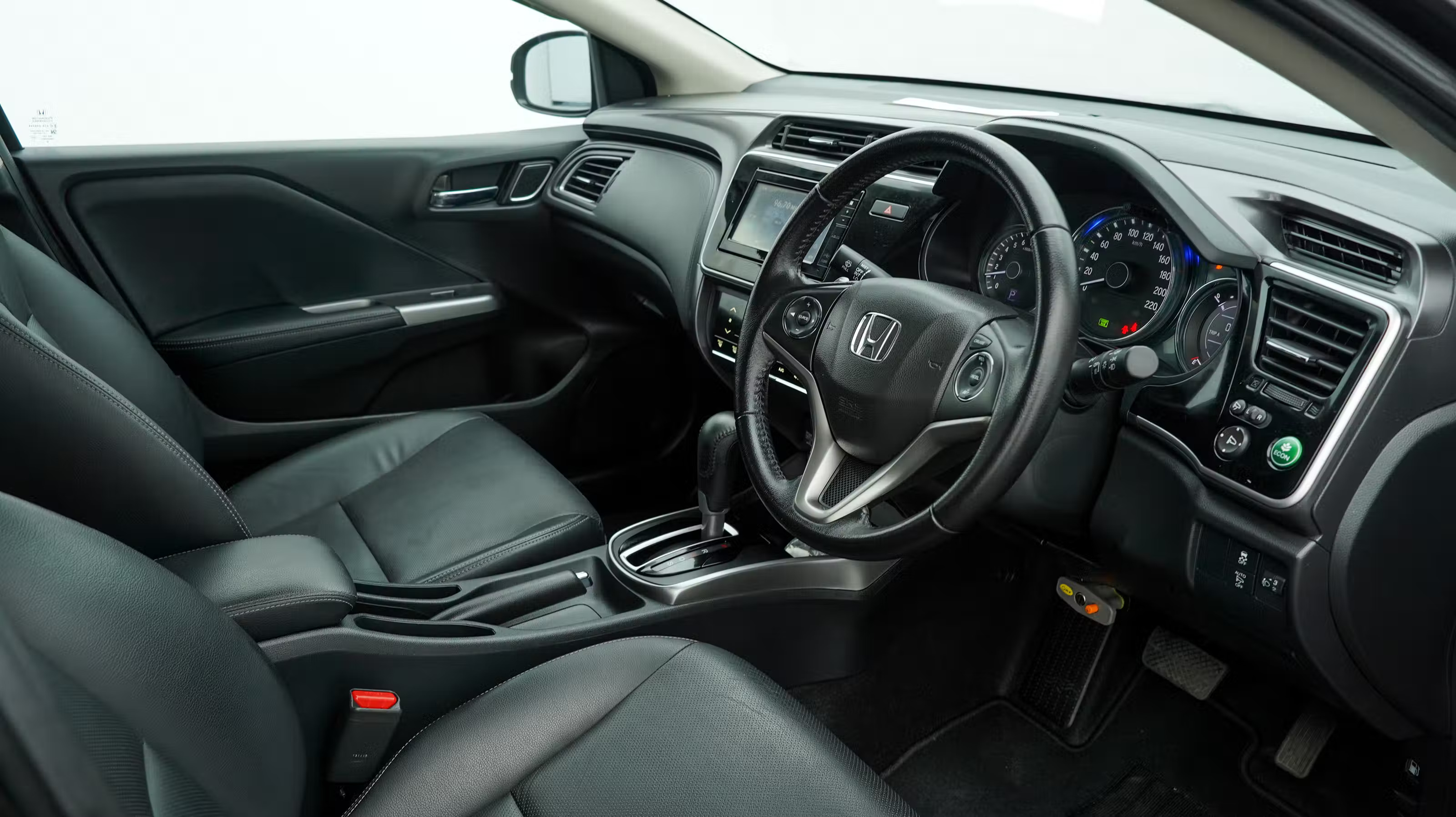 Interior wise, you get folding rear seats to extend the boot space, radio/CD media unit for the S variant, whereas the E & V gets a 6.8-inch touchscreen media unit, HDMI port (to connect your phone), two rear car charger sockets, cruise control (which assist the driver in controlling the speed of the car without the driver’s input by setting a speed limit), paddle shifters to change the speed of the car (located behind the steering wheel) and four speakers for the S & E variants as compared to the V, which gets 8 speakers. The E & V variant also gets a reverse camera and rear air-con, while ECON mode is available on all variants, which improves petrol consumption. Finally, the V variant is the only one that gets leather seats.

Aside from the airbags which minimize injury during a collision, all post-facelift City came with a standard set of safety features such as Anti-lock Braking System (ABS), Electronic Brake Force Distribution (EBD), and Brake Assist (BA), which prevents the tires from locking up and skidding when sudden braking. This will allow the driver to steer the car to safety.

Moreover, it comes with Vehicle Stability Assist (VSA), which helps to stabilize the car during a potential collision when avoiding an accident or preventing skidding on slippery surfaces.

Furthermore, it also comes with Hill-start Assist (HSA), which prevents a car that’s stopped on an uphill or downhill from rolling backward or forward when the driver’s foot is off the brakes and finally it also comes with Emergency Stop Signal (ESS), which means the hazard warning lights flashes during a sudden brake.

Below are examples of some of the Honda City units available on Carsome: 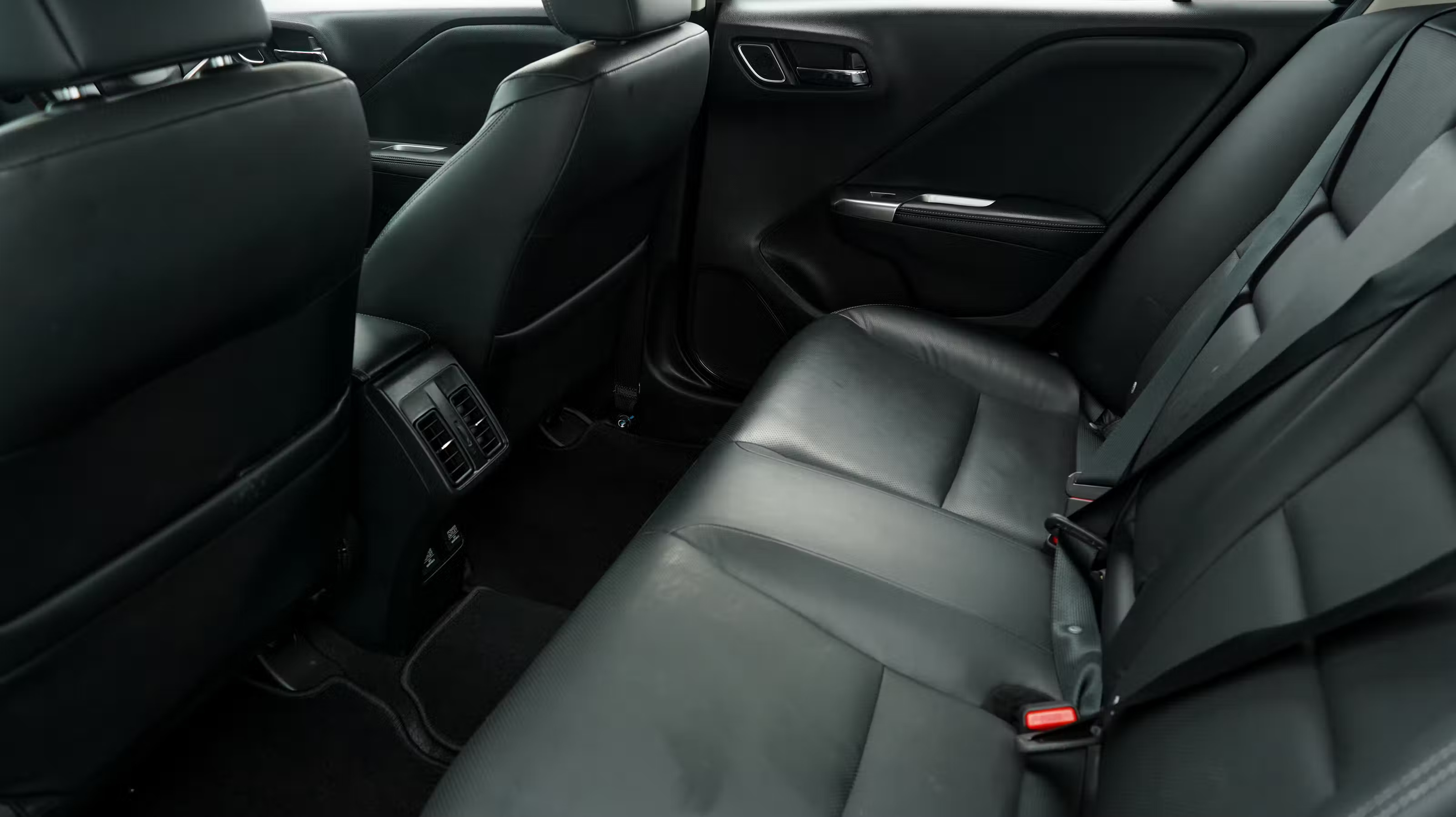 Pros & Cons of a Honda City

However, this isn’t the case as this unit has slightly more than 60k kilometres for a 6-year-old car. This means that the car only drove slightly more than 10,000 KM per year since 2017, which is considered below average. As reported by Malaysian Institute of Road Safety Research, the average mileage a driver covers in Malaysia is slightly more than 28,000 kilometers per year.

On the other hand, if that is out of your price range then the pre-facelift 2014 Honda City is also a good purchase. A fair price to pay is around RM52,000 and based on the table above, that can get you a 2014 Honda City V variant, which is priced at RM51,800 with a mileage of 64,757 KM. With the similar loan calculations, you’re looking to pay an estimate of RM567 per month. 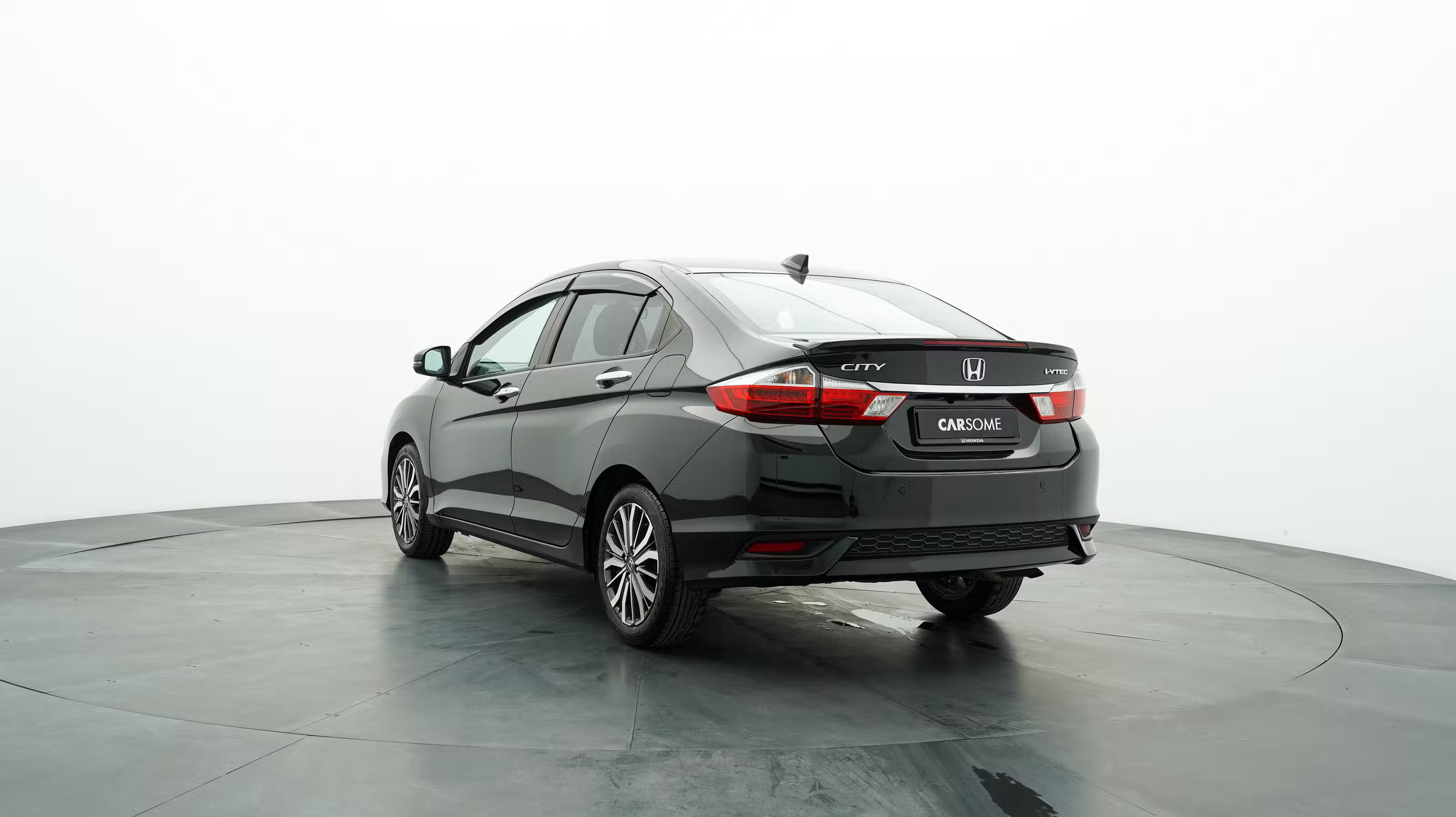 Which Honda City Variant to Buy?

It is highly advisable to fork out just a little more to get the V variant of the Honda City as that gets you the six airbags, whether if it is the pre-facelift or post-facelift. The “little more” is almost negligible when considering the monthly payments as you can’t put a price on safety.

The Honda City has been Honda Malaysia’s best-selling passenger car for a reason, and you do not get such standing without reliability. The most common problems in the pre-facelift models were the rattling noises that came from the dashboard, which some users have made complaints to Honda Malaysia and they fixed it by inserting soundproofing foam into the dashboard. However, the post-facelift models improved on this issue.

Mechanically, there are no common problems here. A regular service and maintenance will keep the car problem-free. There is a reason why Honda Malaysia provides an unlimited mileage warranty for 5 years at the time as they are confident in the reliability & durability of the car. Nonetheless, there was a recall by Honda Malaysia for fuel pump replacement for 2019 models but only as a precautionary measure.

It should be noted that there are pre-facelift owners who have changed their car’s shock absorbers (which is essentially the car’s legs that absorb the bumps and potholes on the road) at the 120,000-kilometer mark during their 5th-year free of charge except for labor fees. Nevertheless, everyone’s mileage may vary.

It Is a Great All-Rounded Vehicle to Own

Honda has been Malaysia’s No.1 seller of non-national passenger car brands for eight consecutive years since 2014, with the Honda City being the main contributor to such position and for good reasons.

The Honda City is an excellent all-rounder car you can put through its paces. It’s a perfect car for all ages and with Honda City being part of our Carsome Certified inventory, you can drive away with peace of mind.