You can buy the greatest, fastest, largest, most stylish or priciest car to have ever rolled a tire on this planet. Nonetheless, the simple fact is that they’re all limited by the last bit in that statement, the tires.

Those four pieces of rubber are the only components of a car that are in touch with the road. The friction they generate from the four contact patches roughly the size of our palm allow the car to accelerate, brake and turn.

The car tires themselves aren’t just rubber doughnuts that grip the road. They’re a sophisticated construction of cables, rubber and select polymers, all molded into what we call a tire. Carmakers and tire manufacturers work closely to engineer and produce a tire that fits the precise needs of the vehicle whilst balancing grip, handling, ride quality, road noise and degradation. 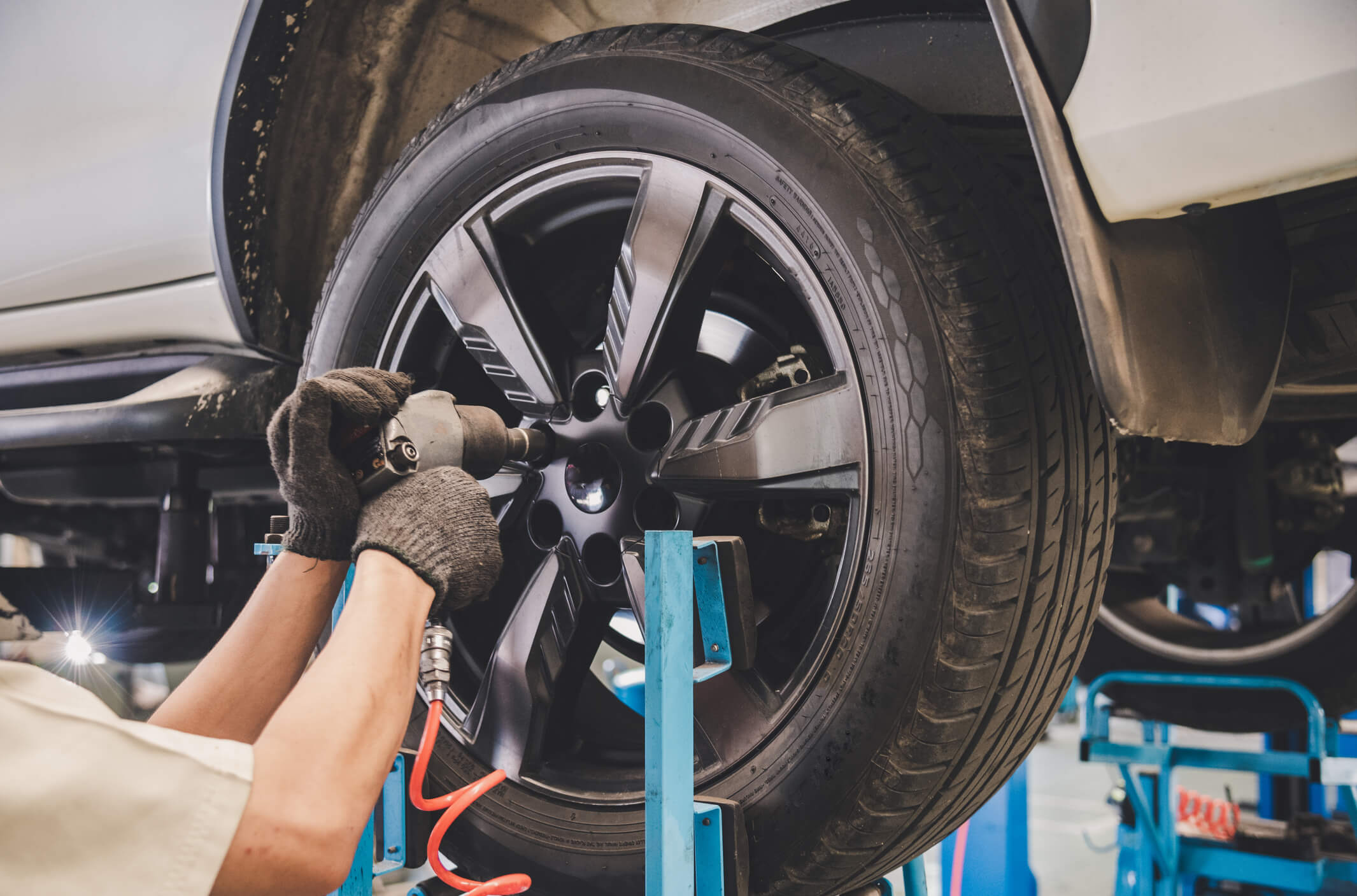 So yes, the tires are arguably the most important aspect of a car.

In that respect, more tires should amount to more grip which in turn is better, right? After all, there’s apparently no replacement for displacement, therefore bigger should always be better… or so we assume.

This begs a poke at the eternal question of, “Is there such a scenario as too much of a good thing?” Unfortunately, upsizing your car tires is one modification that benefits from “moderation.”

Keeping with the theme of moderation, going for a slightly wider tire will reap some benefits but too wide and you might find the cons beginning to outweigh the pros.

We’ll take a look at how to go about discovering the sweet spot to upsize as well as the downsides of going too wide in a car that isn’t going to be giving supercars a run for their money.

Read More: Tires: Fastest & Easiest Way to Tell a Quality Used Car from a Lousy One

Why Do Owners Upsize Their Tires?

Ultimately, people opt to upsize their tires for three reasons. Well, perhaps two and a half is more accurate. We’ll get to that in a bit.

The first reason is pretty shallow as it’s purely for aesthetic reasons. That’s right, it’s all about looks. Most non-performance cars always appear to be a little under-tired, giving the impression that they skipped leg day.

Therefore, most owners that step up to a wider tire do so in a bid to fill up the wheel arches a little more and have the sidewall of the tire line up closer with the edges of the fenders for that fuller look in the four corners.

Moving onto reasoning that’s a little more substantial, the second purpose of upsizing the tire is for performance gains. Yes, a wider contact patch will translate into performance gains in the handling department but the limits rest with moderation.

Another option in the quest for tractional gains is to not upsize the tire but instead switch to a more performance-oriented tire instead. Retaining the identical size will ensure the instrument cluster readings and ABS calibrations still adhere to factory specifications and will work as intended.

3. When the Stock Tires Come In Uncommon Sizes

Lastly, certain new vehicles tend to come with uncommon tire sizing from the factory. The reasons vary but when the time comes to replace the rubbers, it might be a little difficult to source the unconventional sizing. Even if the tire shop manages to acquire a set, the price might be on the steep side given its rarity.

In that scenario, many owners would opt to upsize into something a little more common that’ll be easier to source down the road and maybe not take such a hit on the wallet whilst at it.

Read More: Changing a Flat Tire Is Easier than You Think

The best way to understand upsizing in a safe manner is to first understand how tire sizing works. This means knowing what the various markings on the sidewall of a tire means.

Once you’ve understood these markings, you’ll be one step closer towards calculating the right tire size for your car.

You’ll notice that tire sizes for road vehicles come in a combo such as this, 215/45R17. Here’s what the symbols on your car tire mean.

The first number indicates the width of the tire in millimeters. Here, that’s a width of 215mm.

Moving onto the second number, that accounts for the height of the sidewall in percentage of the width. In this example, the sidewall of the tire will be 45 percent of 215mm.

The last number usually follows the letter ‘R’ and represents the diameter of the rim in inches. That’s a 17-inch rim in this scenario. The ‘R’ indicates a radial construction for the tire, the norm for all modern car tires.

After these numbers, you will notice a combination of numbers and a letter such as 91V. The 91 here is the load index that is the tire’s maximum safe weight carrying capacity. A quick search online will reveal the table that lists the exact weight each number represents.

That would be the letter ‘V’ in this example. The speed index is, as the name suggests, the maximum sustained speed for the tire when the vehicle is fully loaded. Again, a quick search online will bring up the table and the actual maximum speed that each letter indicates.

Pros and Cons of Upsizing the Tire

This is the most important piece of information to consider if you’re going to upsize your tires. It’s called the “3 percent rule.”

Essentially, the rule states that the overall diameter of the new tire on the wheel should be within three percent of stock tire and wheel’s diameter.

Bear in mind that the tire width and sidewall height are inversely proportional. If you increase one, the other number has to decrease to retain balance.

For example, if you do opt to go with a wider tire, the new tire’s aspect ratio for the sidewall should be lower to maintain the overall diameter within the aforementioned 3 percent.

There are plenty of online tire width calculators that’ll handle all the numbers for you. Tiresize.com has one of the easiest calculators. Just input the standard and proposed new tire size to check if it’s within the three percent rule.

Let’s take a look at this example of our calculation on Tiresize.com to better understand upsizing within the safe parameters. 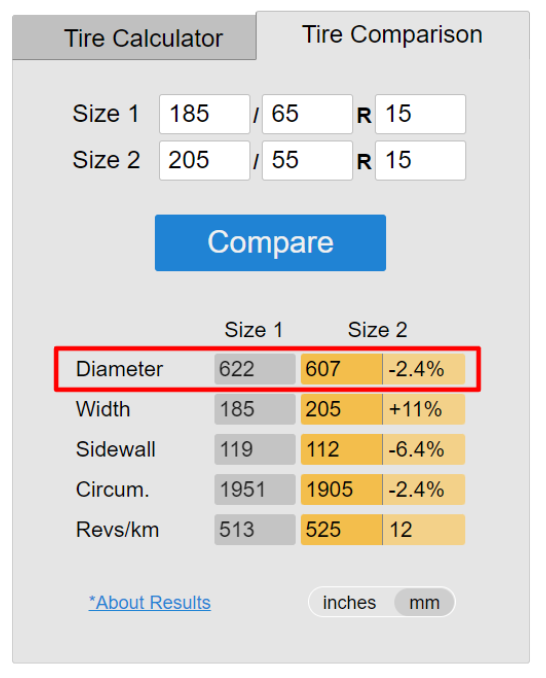 Based on this example, if your car’s standard tire size is 185/65R15, swapping to a wider 205mm tire will require the sidewall height to be lower to maintain the overall diameter. In this scenario, an aspect ratio of 55 for the sidewall in a 205/55R15 tire will yield an overall diameter of minus 2.4 percent which is still within the recommended three percent.

As you can see, upsizing your tire isn’t as simple as just rolling up to the neighborhood tire shop and dropping some money on the widest rubbers they carry. It could be to the detriment of your car’s handling and safety if done incorrectly.

In the long run, we would recommend retaining the factory tire size but going with a better tire.

However, if you must upsize to a wider tire, stay within the three-percent rule and you will be perfectly fine. Anything beyond that is dangerous and not worth the trouble or money.