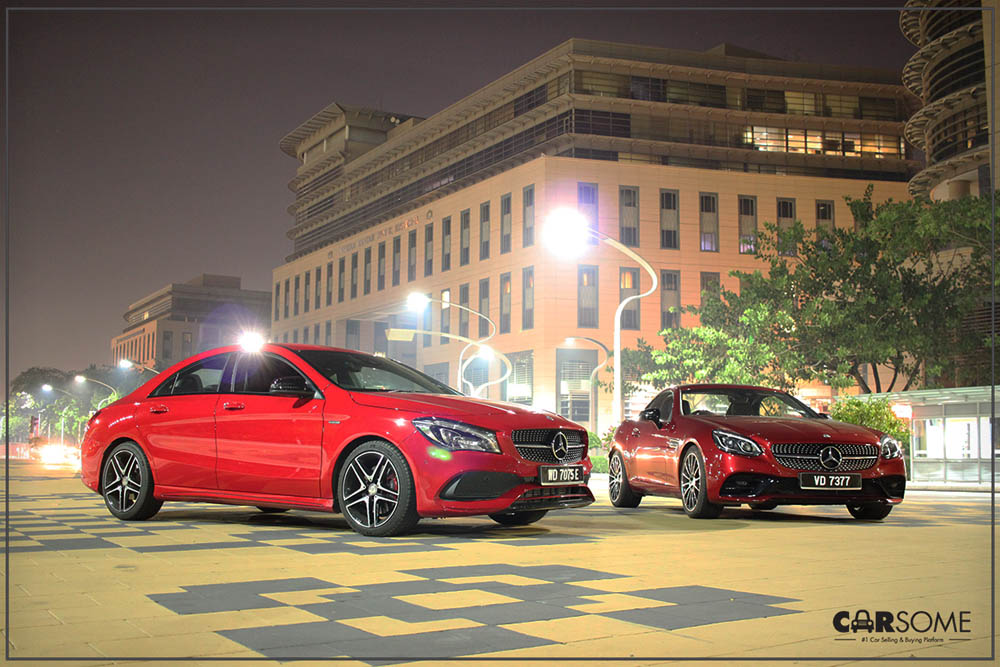 Mercedes-Benz’ sales performance for 2016 has been its highest ever with 11,779 vehicles sold, up nine per cent from 2015 and a record year for car launches – 17 models to add onto a 2016 portfolio of 50 vehicles for the Malaysian market. With 638 units of the CLA, we couldn’t help but calculate that 12 units of the CLA are sold per week last year. To begin 2017, let us open the year with the brand’s sporty models as we highlight and test the facelifted CLA 250 Sport 4Matic Coupé and the SLC 300 AMG Convertible. 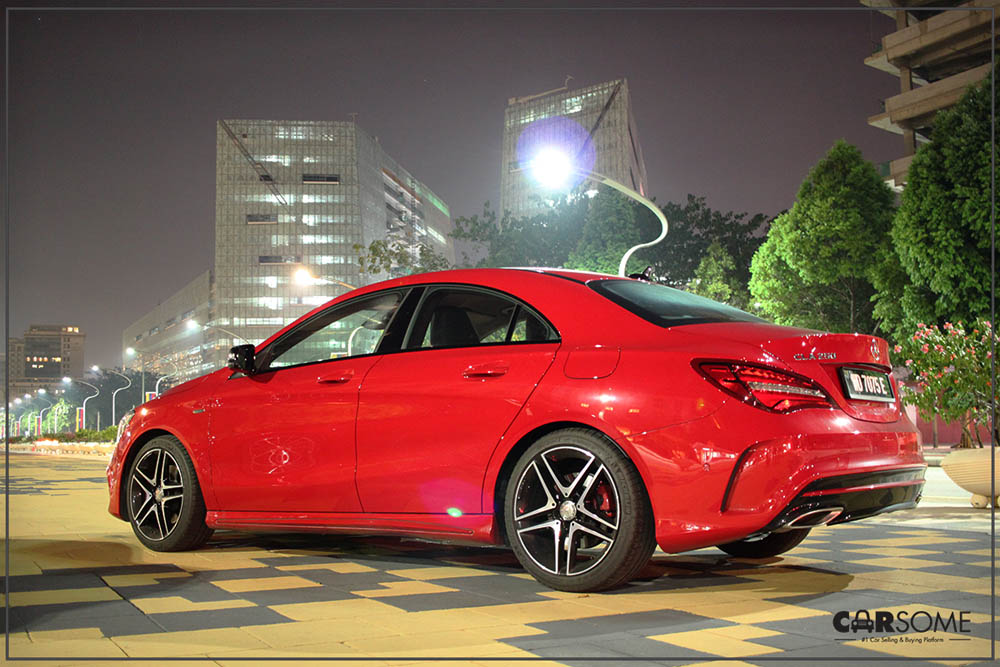 Together these two sporty offerings are updates of current vehicles that are leaders in their vehicle’s class. Both feature new bumpers and a diamond radiator grille as standard on top of numerous enhancements to the interior. For the CLA, its updates although minor accentuate the Coupé a step further. At the front, the new signature swooping lower intake is joined by LED High Performance headlamps that illuminates with a colour temperature that is closer to daylight than regular xenon headlamps. As the eyes swoop to the rear end, the newly designed LED tail lamps go together with tailpipe trim panels that stay flush into the bumper. 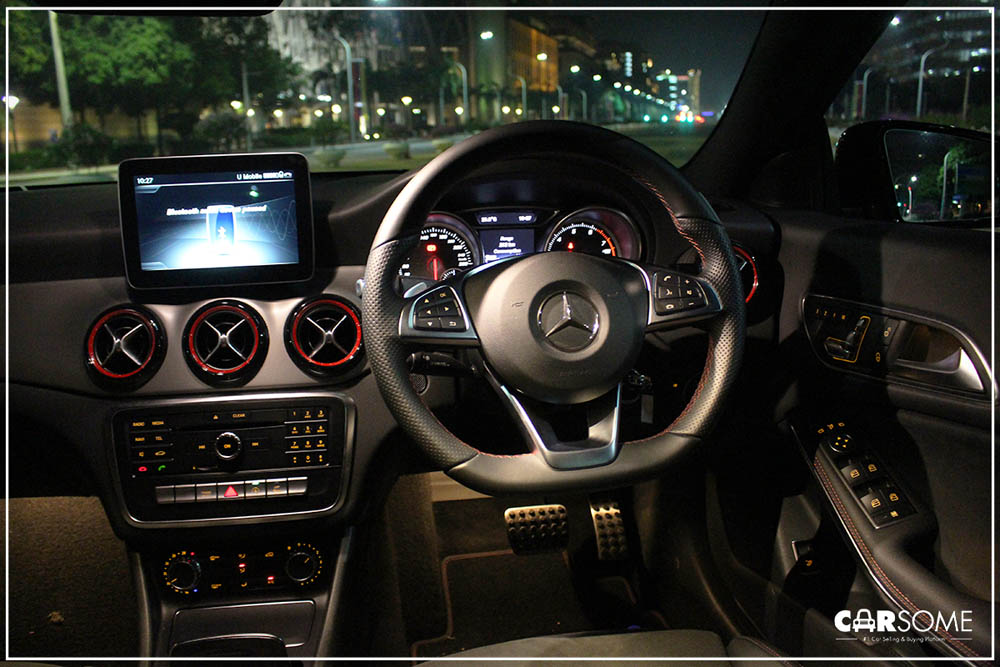 The interior opens into new seat covers, trim parts and chrome-plated controls. The details surrounding the switches in the doors and the stowage compartment in the centre console has been meticulously looked at. The freestanding central display is an 8-inch unit with a new glass cover and with the new steering wheel design, has red needles on top of new styled dials. The brand’s signature Audio 20 system remains and is used to control a host of infotainment options – audio, driving modes and phone. 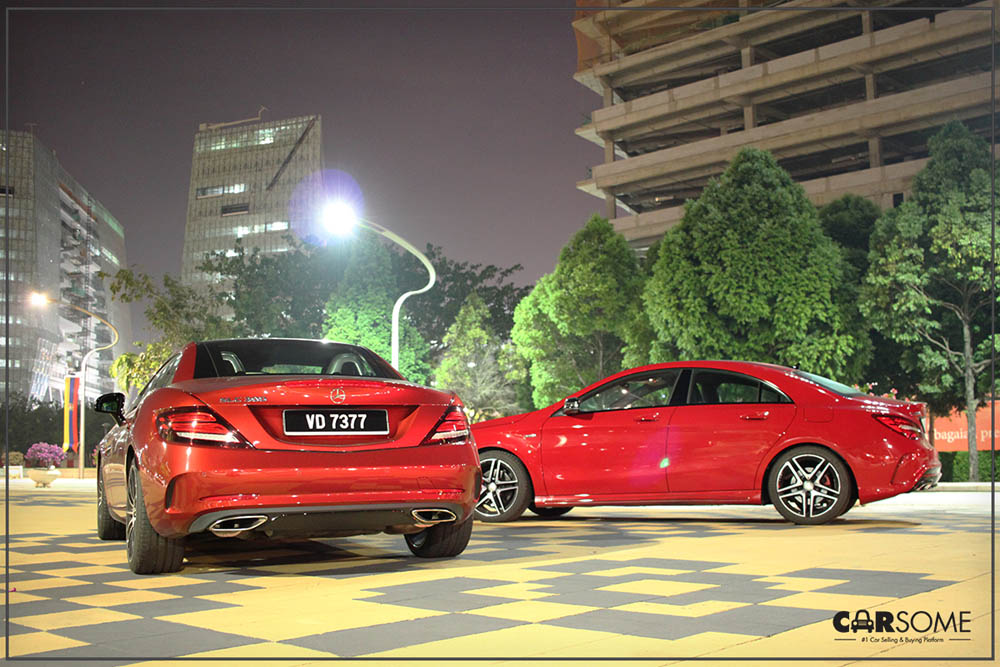 Like the CLA, the SLC is also a definite crowd puller. Updated with the brand’s new nomenclature which sees the previous SLK renamed to SLC – as the relationship the roadster’s shared technology with the C-Class. Historically, the original SLK which was launched in 1996 became popular with its retractable hardtop (Vario-roof as it is called) and has been instrumental in paving the way for other convertible hardtop cars along the way. 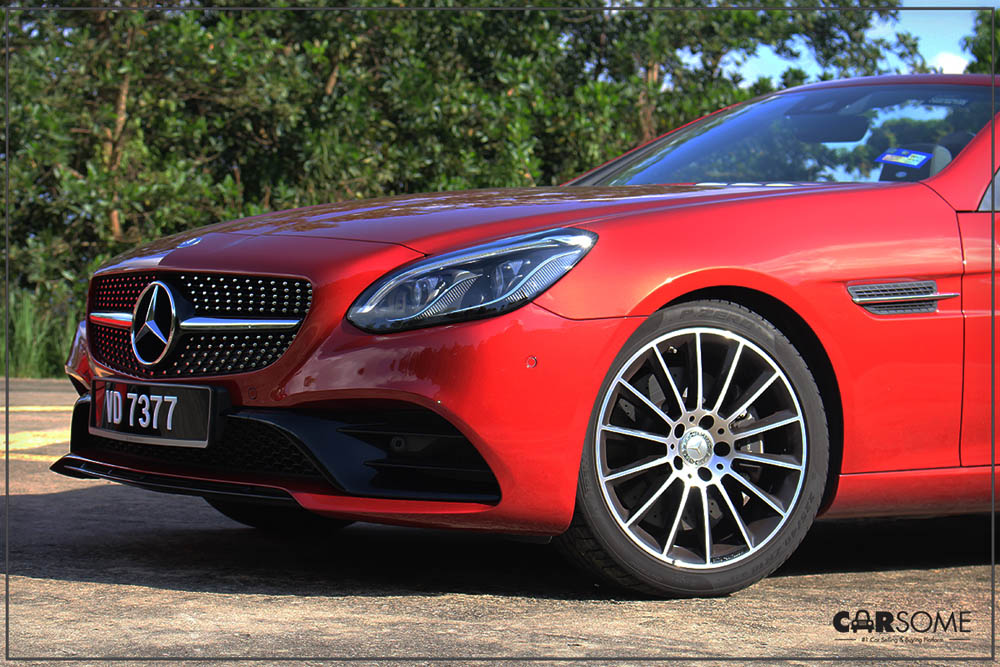 What sets apart the new SLC from the previous SLK is certainly the new front and rear end that has been updated to showcase the brand’s current signature look. From the steeply raked diamond radiator grille to the striking air intakes and distinctive headlamps, the front-end design elongates the look of the arrow-shaped bonnet and accentuates the SLC. At angles, it is reminiscent of its larger sibling the SL and the menacing AMG GT. 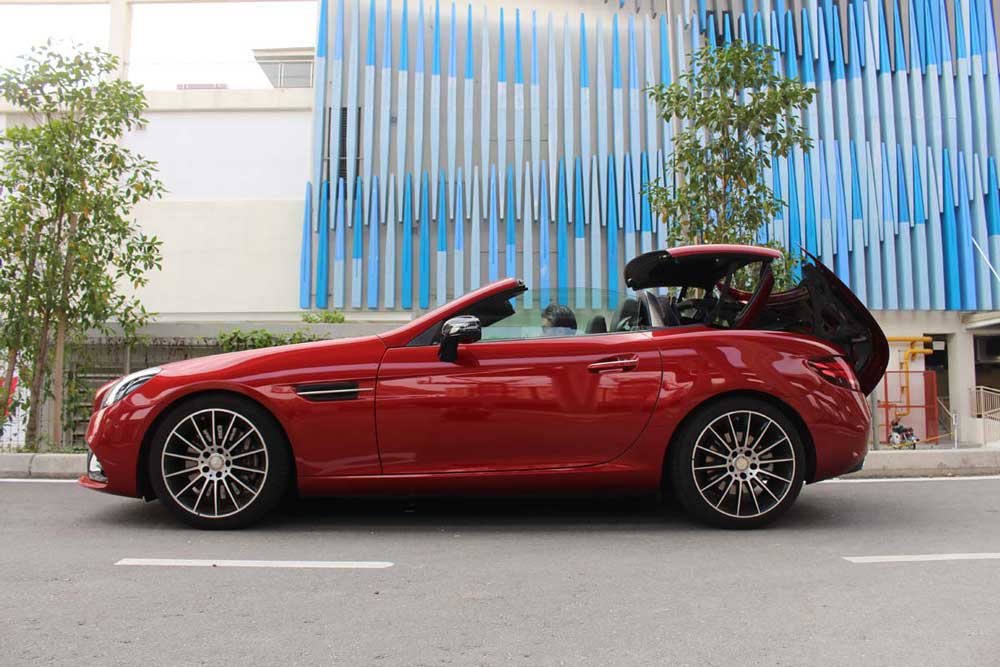 It takes approximately 18 seconds for the roof to go down or up.

As the eyes move towards the side profile, the roadster silhouette comes into shape, bringing the ventilation grills that draw the rising beltline and sweeping roof merge with the rear to showcase the muscular wings, tail lamps with LED and a new bumper with black diffuser. 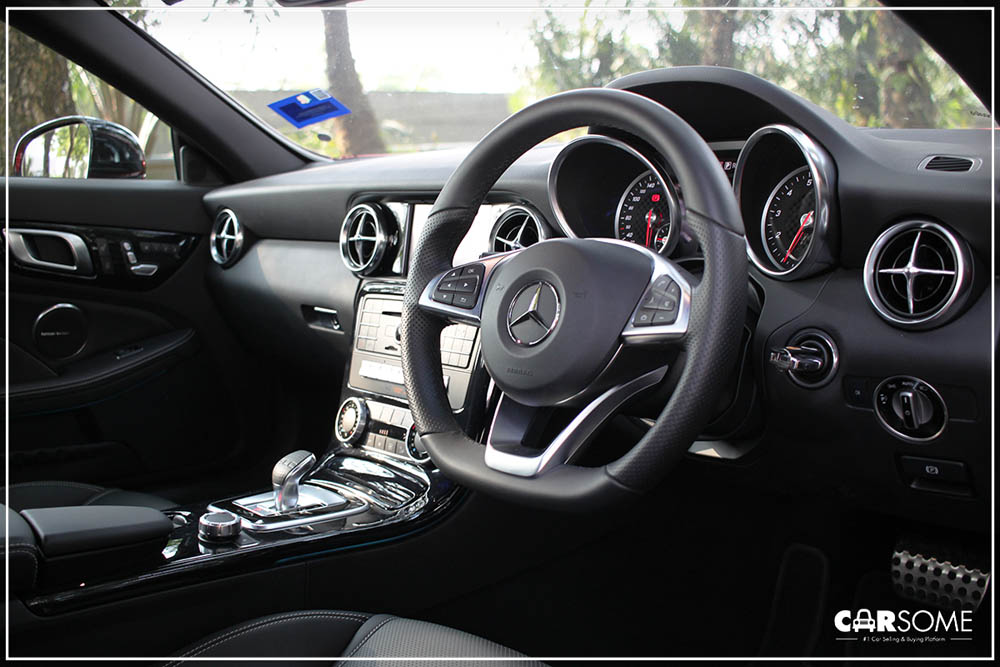 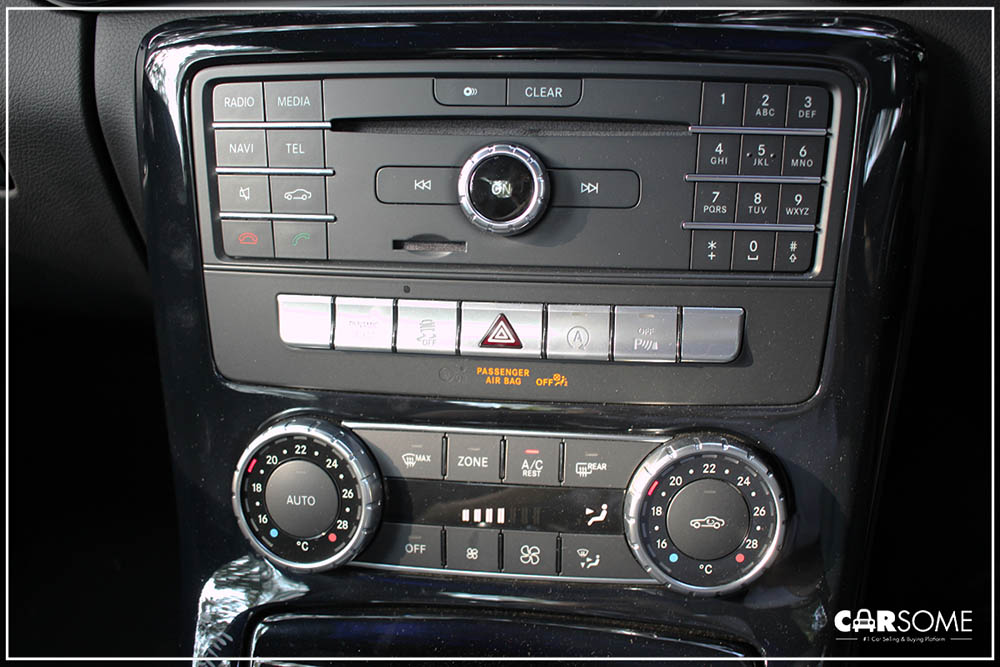 In the cabin, those familiar with the pre-updated interior will notice the subtle yet significant changes. Firstly, the new-generation sports steering wheel with a flat bottom design and paddle shifters is joined by a new gear lever, a small brushed aluminium piece embossed with the SLC name. Like the CLA, the SLC comes equipped with the Audio 20 accompanied by a 7-inch display but with navigation pre-installed. Surprisingly for a car this size, there are many storage compartments within the cabin that allows quite a fair bit of items to be tucked away when needed. 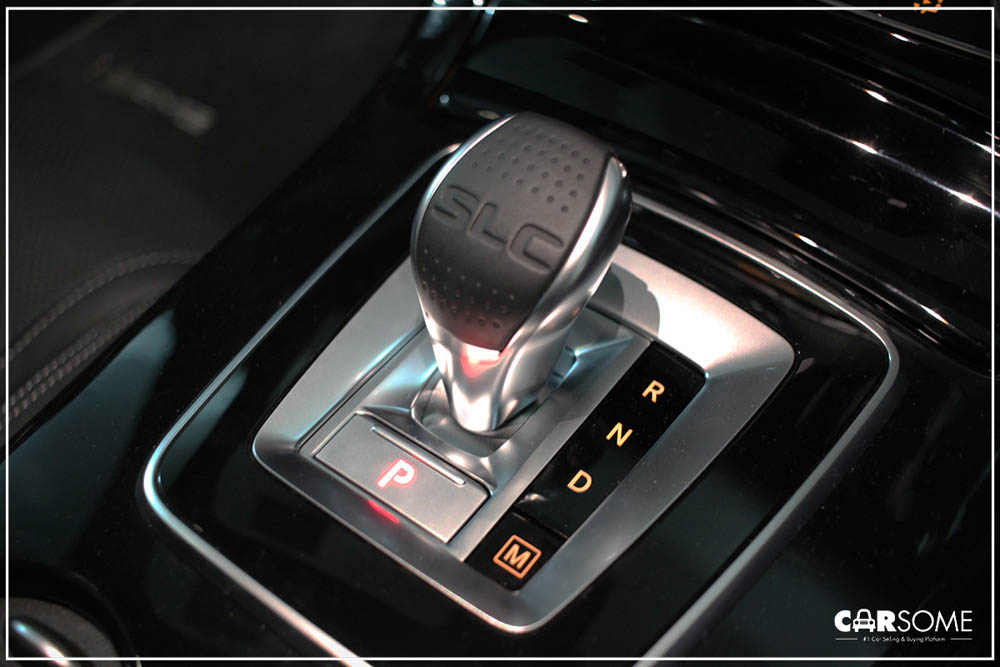 And talking about space, the highlighting factor of boot space is a whopping 335-litres of luggage allowance. While that doesn’t seem like much, it does trump the current Ford Focus hatchback which only comes in at 316-litres. The only snag about all this though, is the roof protector which houses the convertible hardtop. When down, the roof protector can’t be tucked away – which poses to be a hassle when removing larger items like a golf bag. 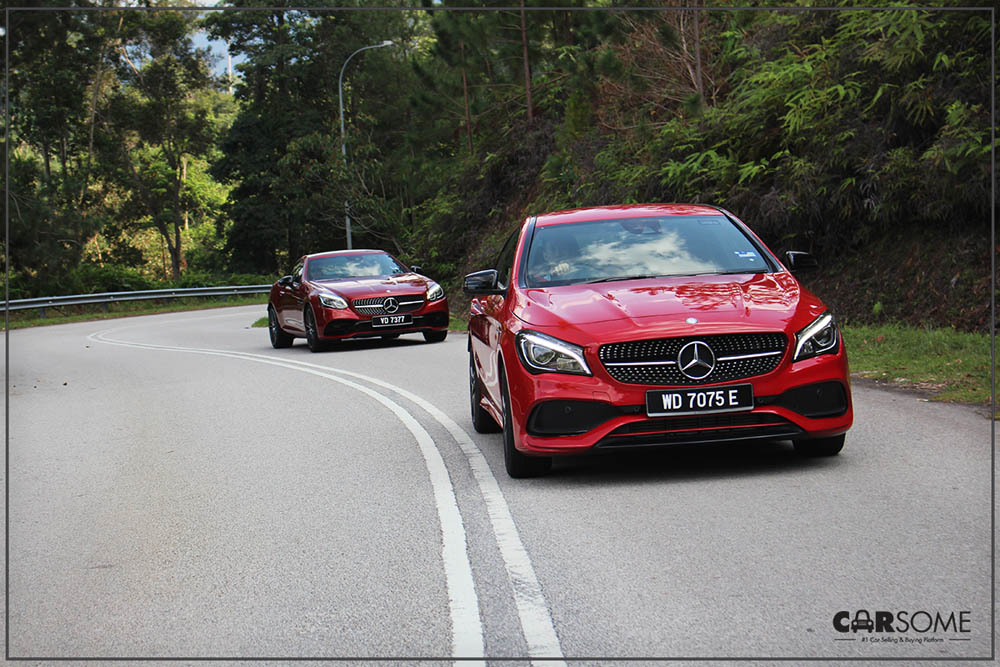 For what its worth, the 4Matic system on this 250 Sport certainly provides awe inspiring confidence behind the wheel. Off the line, the acceleration is relentless when put in Sports mode (thanks to the 7-speed dual clutch gearbox), but can be economical when in Eco mode – placing revs when cruising at 100km/h around 1,800rpm. At tight narrow bends, it handles like an FF through the tight narrow bends and when necessary, the brakes clamp on hard with good modulation and a progressive feel. Both the brakes and chassis is very assuring even under sudden braking manoeuvres. 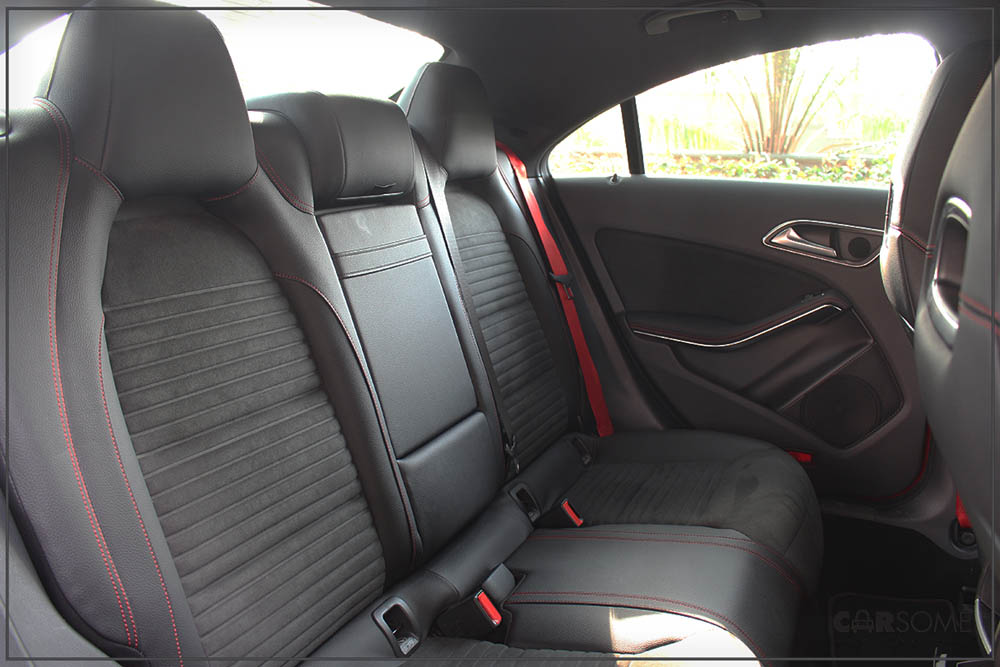 Lifestyle wise, the CLA could be a challenge for drivers used to the standard central positioned gear lever, which here is replaced by the brand’s standard stalk unit. And also while there is respectable legroom for a vehicle this compact, the low-rear roofline which is a by-product of the coupé design could pose as an issue to taller occupants. 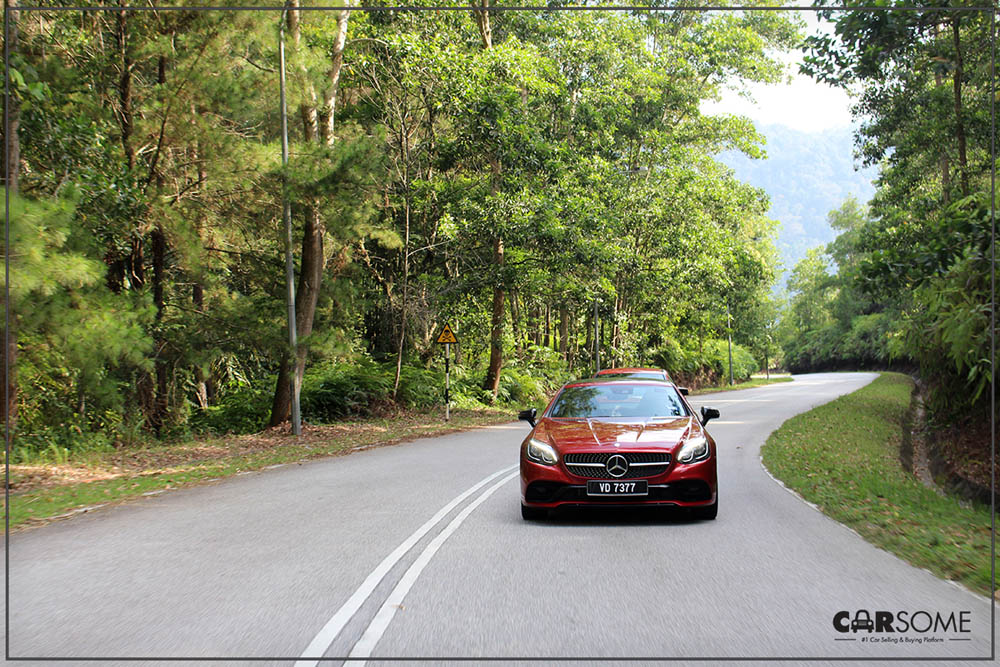 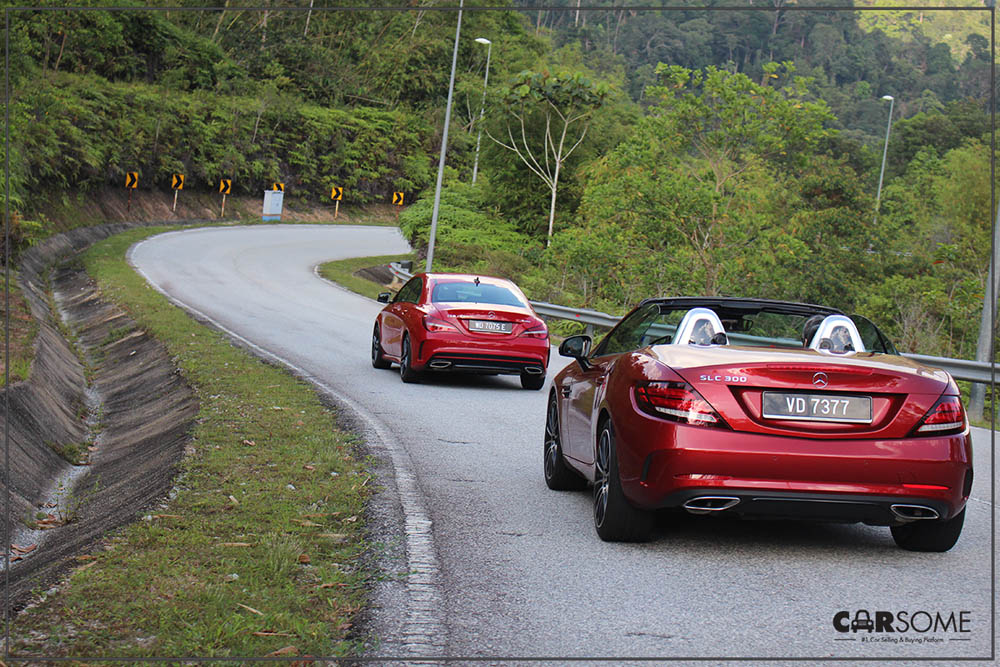 The driving experience of the SLC stays true to its roots. We say this to the fact that not only are there multiple modes available from the Dynamic Select which modifies the engine, transmission, steering, suspension and sound through the sports exhaust (which in turn enables the driver to feel the sensory feedback the SLC provides) but also one that allows for a range of lifestyles. Almost everything here is taken a step further than the CLA, but with stickier tyres, quicker engine management with gear changes from that truly special 9-speed G-Tronic transmission. Enter into Sports Plus mode and gear changes are actuated in mere miliseconds when you want it to. 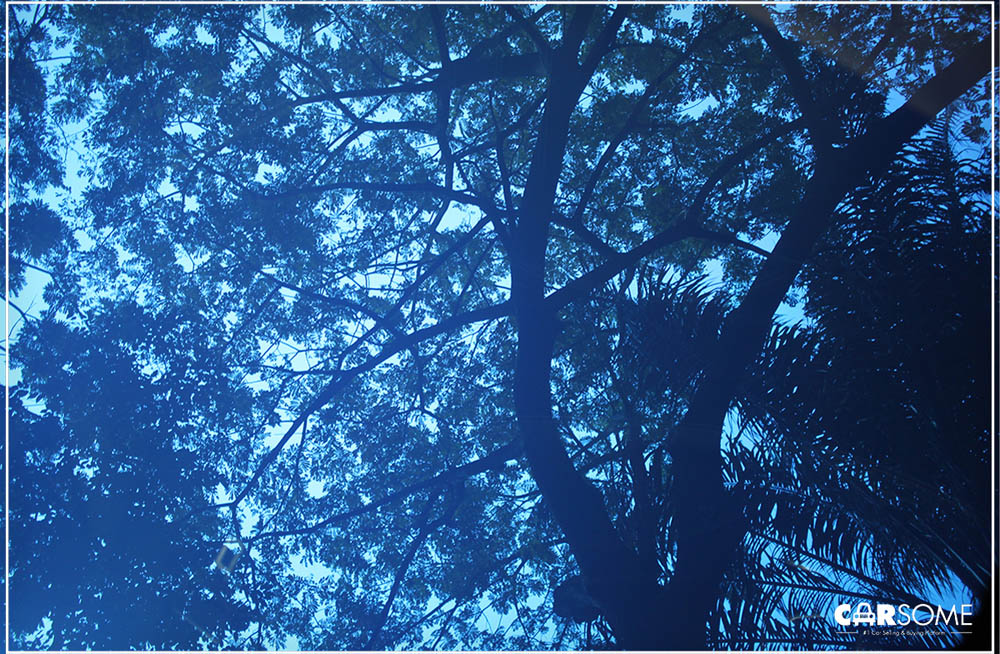 When needed, the panoramic Magic Sky Control glass roof of the SLC can tint and clear the glass at the touch of a button.

Top down or up, you could be driving it by the countryside, in the city, on the track, and on truly technical roads, you can have a good amount of fun up the twistys of Bukit Tinggi, or by the coastal roads of Batu Ferringhi. 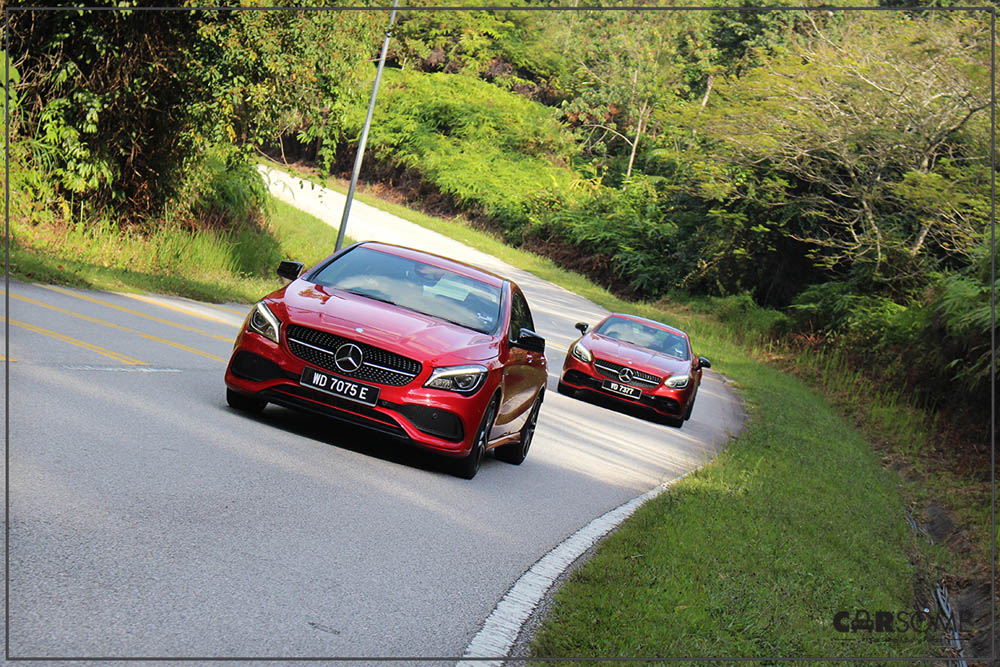 You can’t go wrong with either one of these handsome coupé and cabriolet pair. In fact both are in their facelifted stage where the following generation will supersede these in time to come. And as Mercedes vehicles are commonly known for, their ability to age and mature with the times. Are these vehicles for you though? All you need to do is to answer whether it fits your lifestyle, and even so, if these cars are able to put a smile on your face everytime you get into one. It certainly did for us, and we hope it will be for you too. Best of all, as of publication, Mercedes-Benz is having attractive financing offers from 1.88 per cent for all their models in conjunction with the coming Chinese New Year.

What do you think about these two? Does it tickle your fancy? Share with us your thoughts in the comments!

Sell your car to Carsome today!