Mercedes-Benz and Aerodynamics: A Route to Efficiency 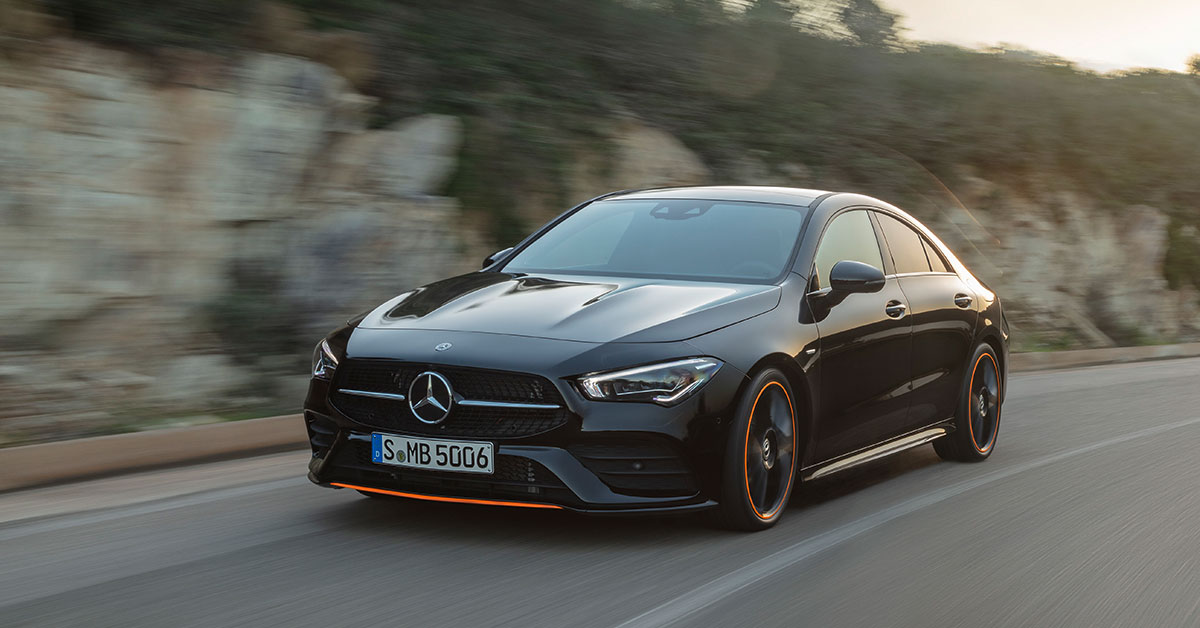 When it comes to fuel efficiency, automakers have been striving hard to put consumption numbers at their lowest possible state. From engines to stop-start systems, weight and transmissions, automakers are innovating the best they can to improve those figures. 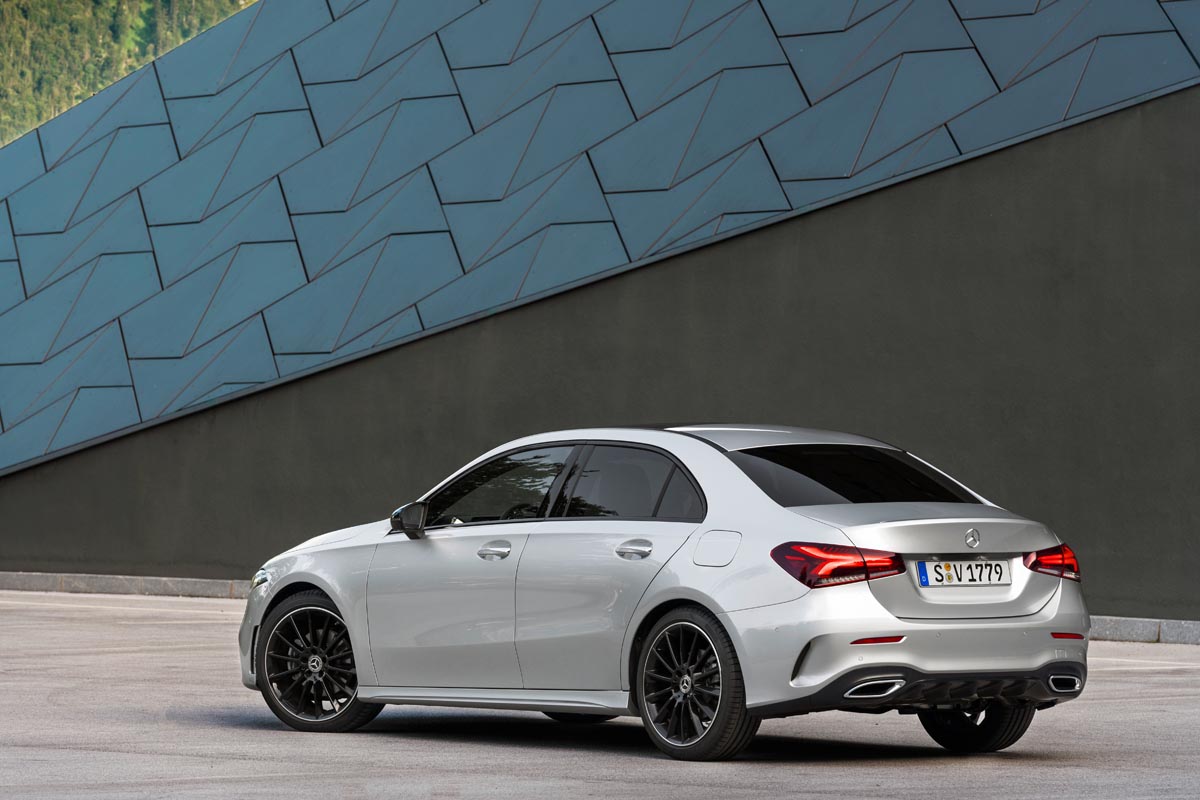 One of the more important factors in this area is the science that involves aerodynamics. Because of this, automakers are ever conscious in building sleeker vehicles. Cars which have been sculpted to have a lower drag coefficient (Cd), or in layman’s terms, one that has a lower drag force when it moves through the air. Simple science tells us that when there is more resistance opposing a vehicle in motion, it takes more energy to go against those forces. More energy equals higher consumption. This is where Mercedes-Benz comes in. 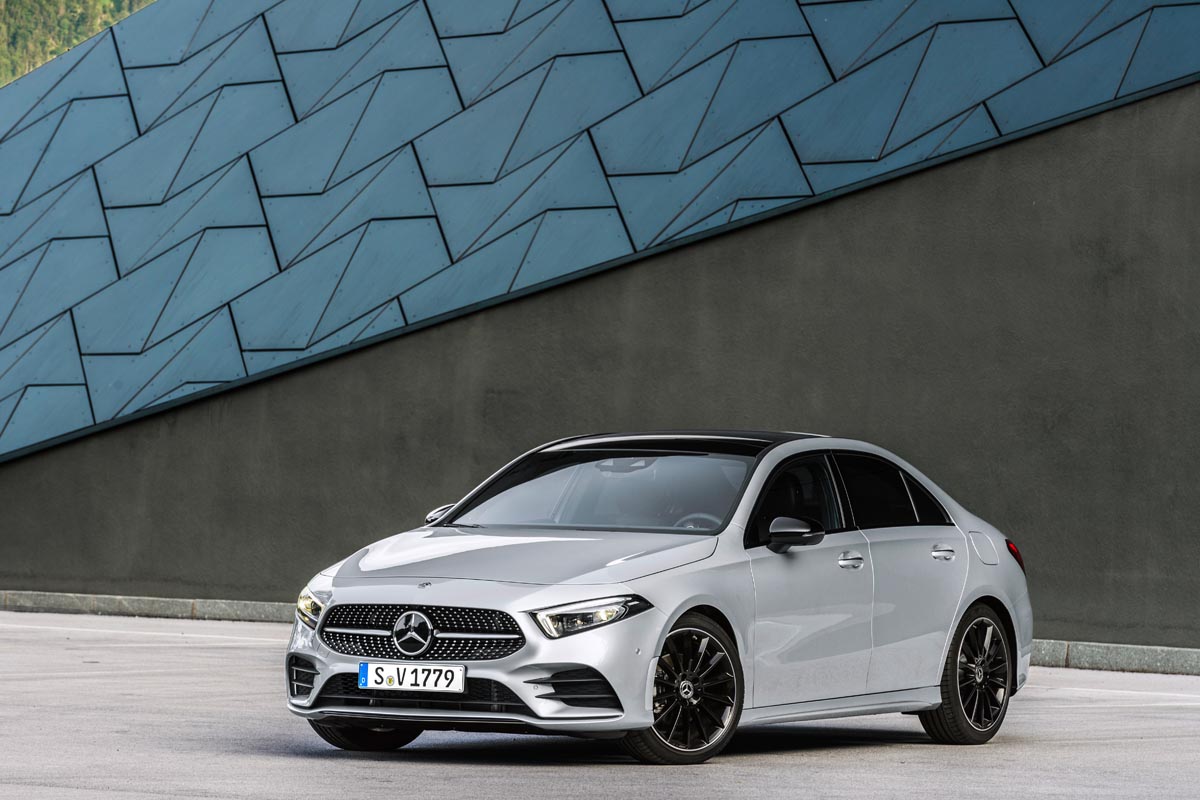 You could mistake the front of the A-Class sedan with the CLA Coupé.

Zooming in on the everyday production car, Mercedes-Benz currently holds the first and second spot in the aerodynamics crown – represented by the A-Class sedan with a Cd value of 0.22 and the new CLA Coupé which achieves a 0.23 Cd and defends the previous record set by its predecessor. 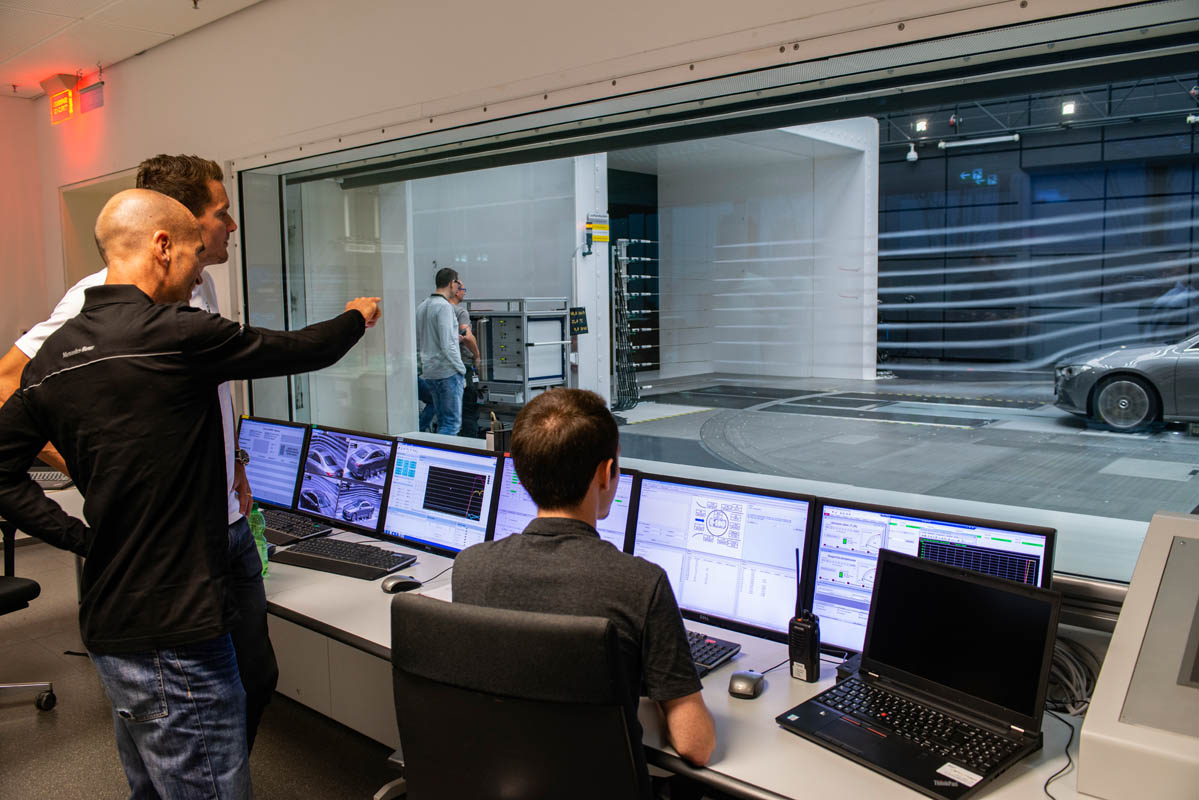 In an aim to perfect aerodynamics of their vehicles, Dr Teddy Woll, Head of Aerodynamics at Mercedes-Benz has made it one of his main missions to search for mobility that is most efficient. It is no wonder then, why Dr Woll recently met up with Ironman Jan Frodeno, a triathlete who is known to be a perfectionist when it comes to looking for the tiniest technical advantage. In the complex triathlon world, the cycling leg is by far the most dependent on optimum technique – in particular on the aerodynamics of a cyclist and their bicycle.

In a recent interview conducted by Daimler Communications, Dr Teddy Woll and Jan Frodeno spoke about how aerodynamics is viewed from both an athlete's point of view, and in Mercedes-Benz vehicles.

What is the significance of aerodynamics as far as you are concerned? 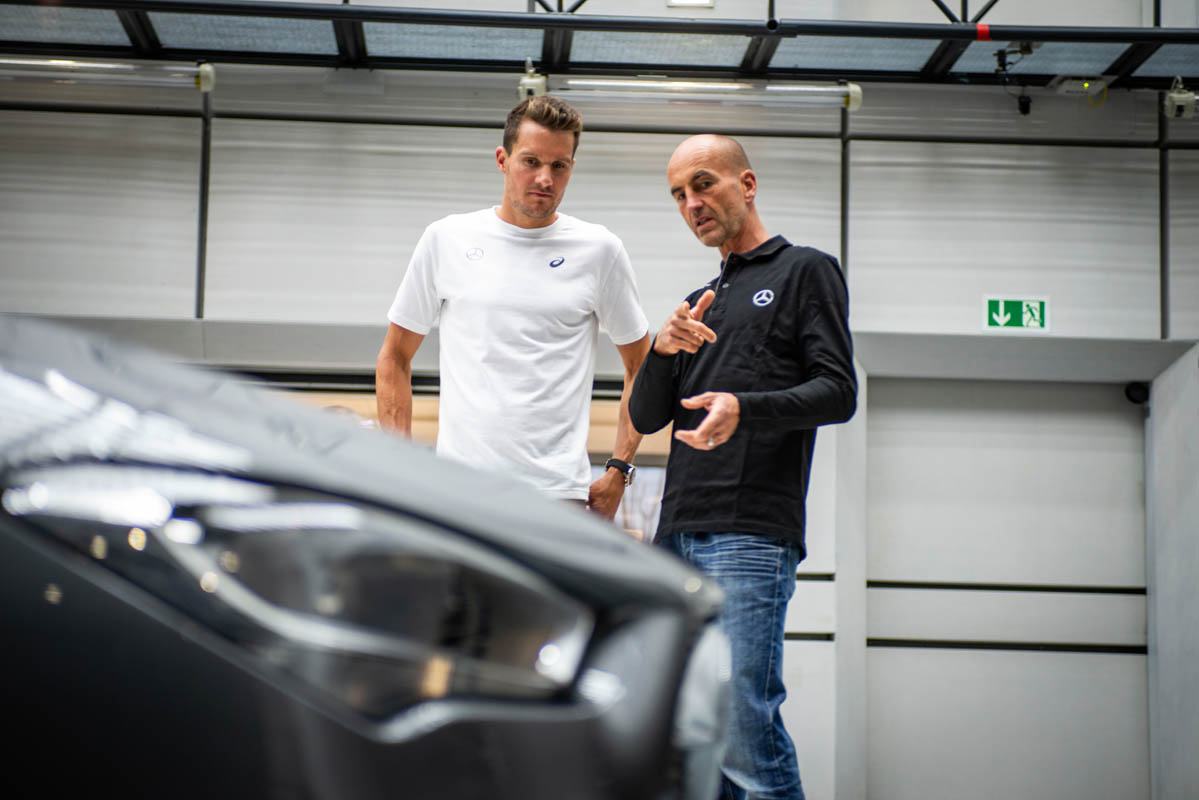 JF: Aerodynamics plays a really fundamental role in the central part of a long-distance triathlon, the 180 km cycle ride. In particular, at the World Championships in Hawaii we have to fight against strong gusts of wind as well as the wind resistance. This makes the issue especially complex. And you need to know that it's not just the aerodynamics of the wheel that makes the difference, it's the decisive interplay between the bike and its rider. Because the body causes around 80 percent of the contact surface for the wind. It's definitely worth a few hours in the wind tunnel to find the ideal seat position. 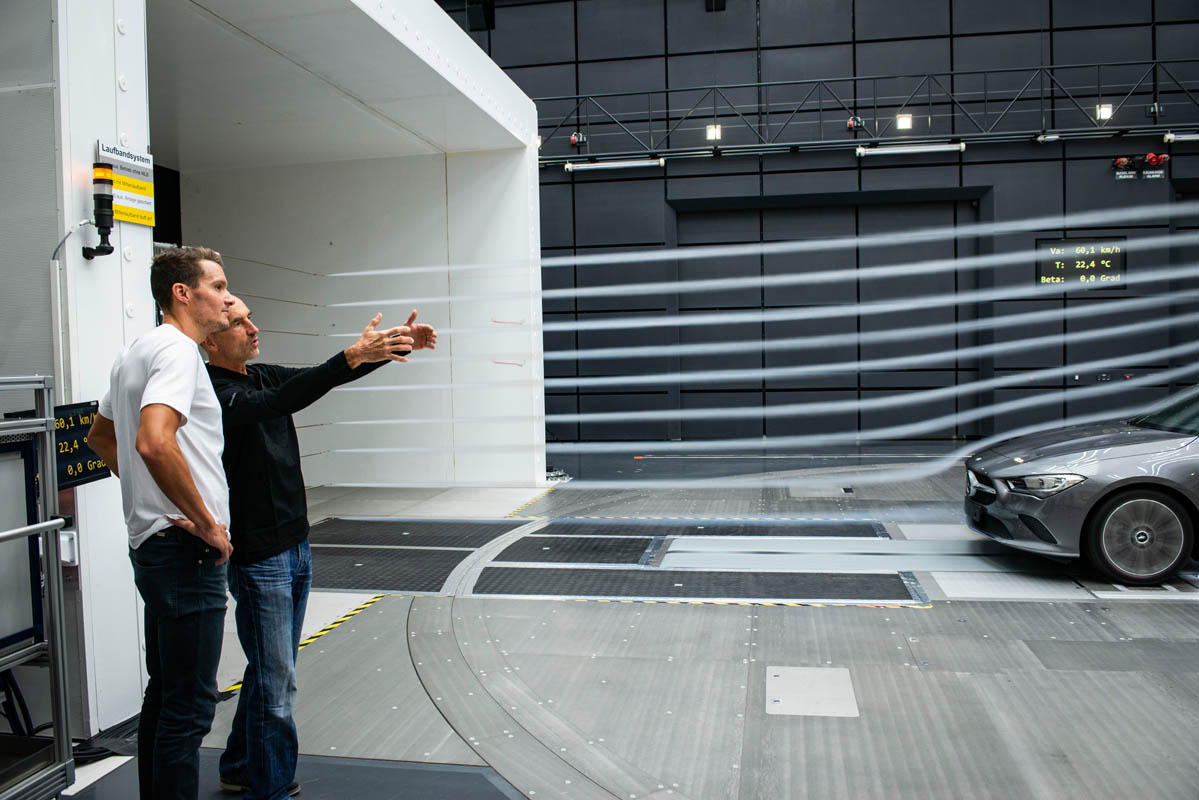 DTW: Aerodynamics are an intelligent way of cutting fleet consumption and also help to close the gap between certified and actual consumption. As the wind resistance grows with the square of the speed, a cd value reduction brings advantages above all at a higher speed. An aerodynamic design is also so important because the vehicles' frontal area is tending to increase: people are getting taller, the battery in electric vehicles needs space and lots of customers prefer an SUV. We are all the prouder that in the new compact cars we have managed for the first time to cut the cd figure yet again and also made the frontal area smaller, in spite of wider wheels and more space in the vehicle.

When it comes to the aerodynamics of the bicycle or car, what kind of ballpark figures are we talking about? 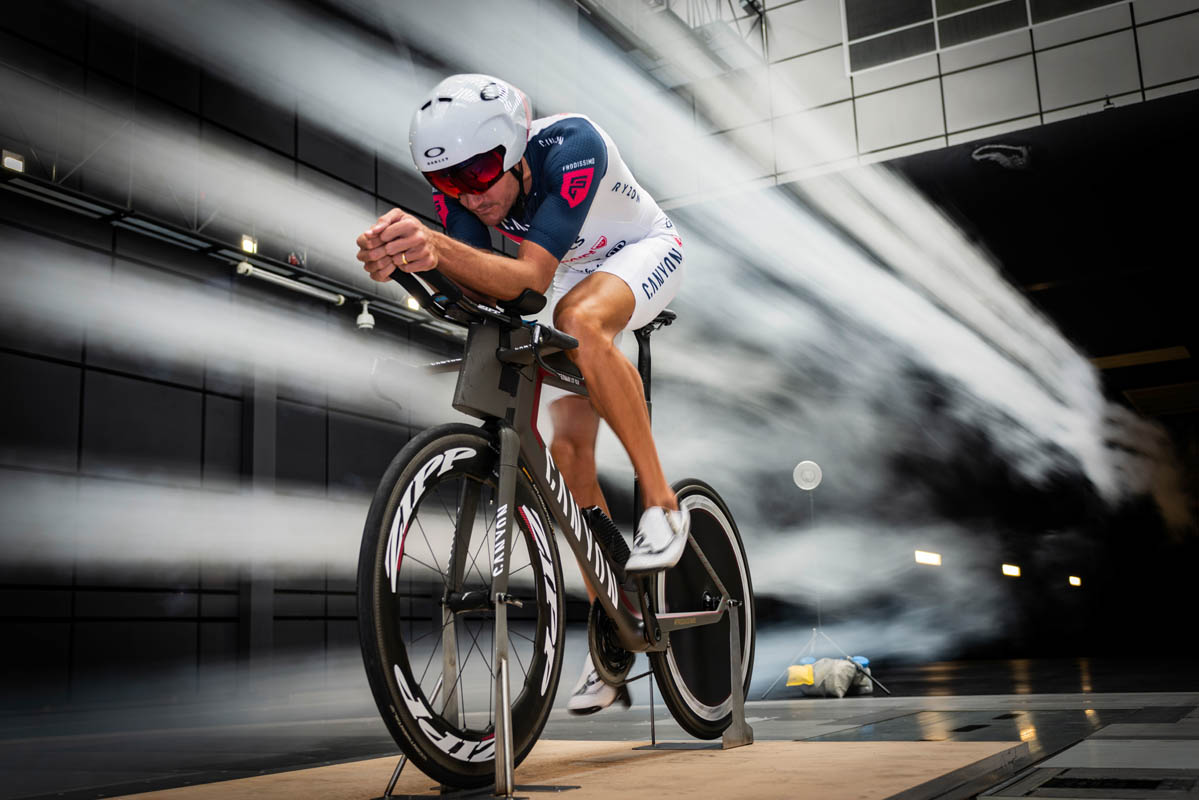 JF: Anyone out for a leisurely ride on a touring bike has a Cd value of around 0.7 m². A mountain biker has about 0.6 m², a racing biker 0.5 m². With me – in combination with a helmet, the pre-determined seat position and an aerodynamically optimised bike – a Cd figure of 0.21 m² was measured. So anyone riding a Dutch bike has to overcome three times the resistance, and at as much as nine times the resistance at twice the speed! 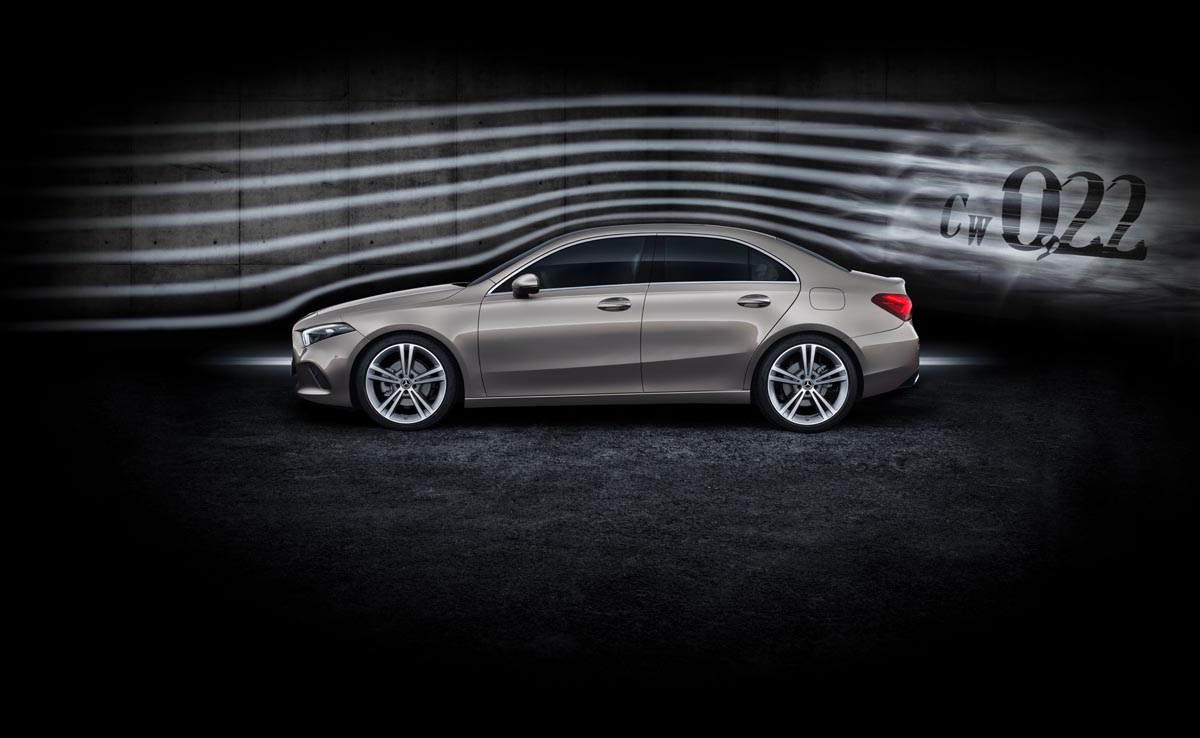 DTW: Our best is currently the A-Class Saloon. With a cd value of 0.22 it achieves the current world record amongst series vehicles and has a frontal area of around 2.19 m². This adds up to a drag coefficient of 0.49 m². Two people in an A-Class are therefore much more aerodynamic then two racing bike riders – despite triple the frontal area.

Is it possible to put the benefit of better aerodynamics in figures? 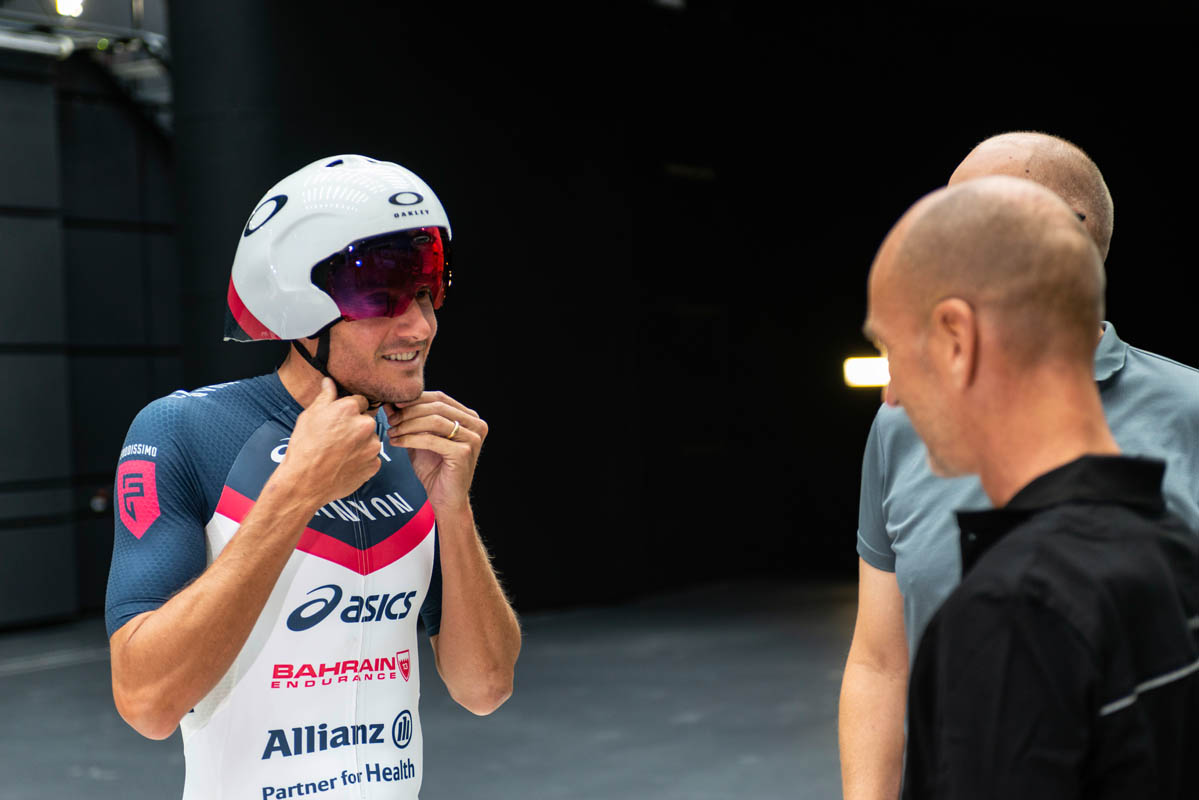 JF: As the external circumstances are permanently changing, it is so difficult to quantify it in absolute terms. But one thing is clear: the less energy I need the faster I can cycle – or I can save energy for the marathon to come. So we cyclists measure aerodynamics in watts – the power we have to generate in order to overcome the wind resistance – or how many watts we can save at a target speed of, say, 45 km/h. 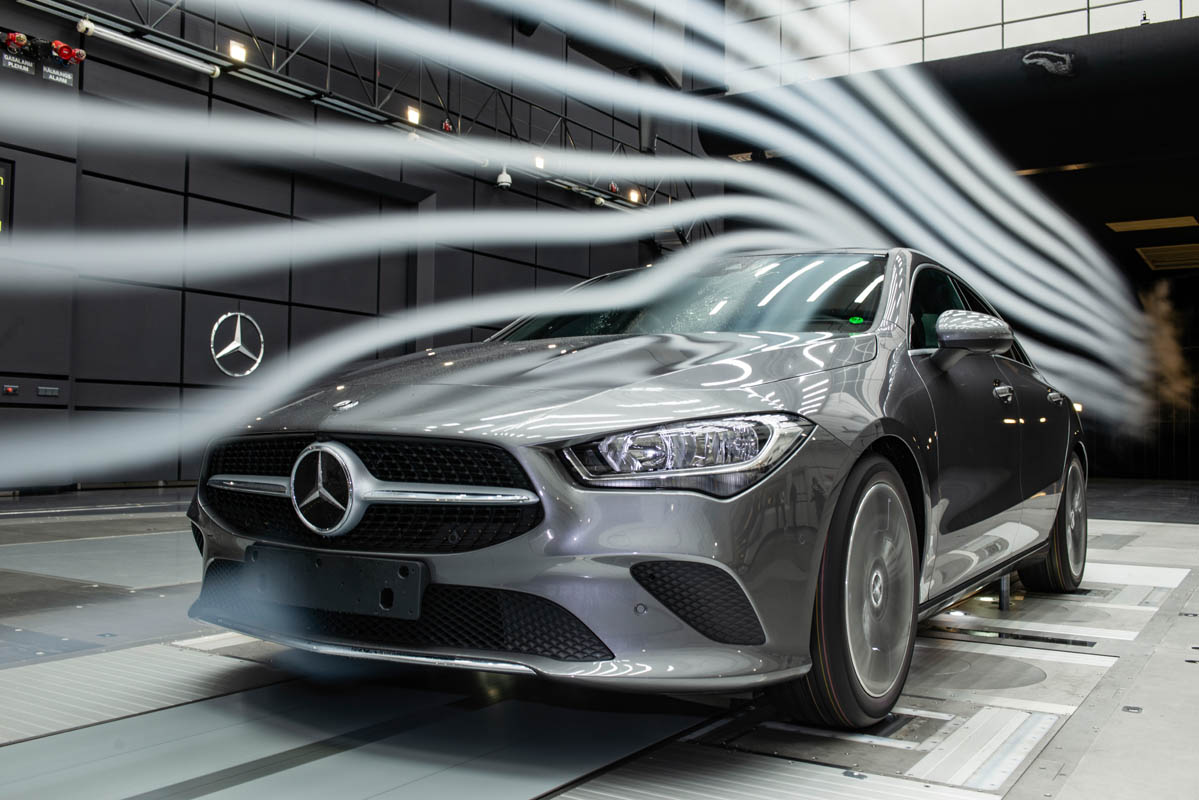 DTW: If it is possible to cut the cd figure by one hundredth, so for example 0.24 to 0.23, the fuel consumption in the customer average falls by one tenth of a litre, at a motorway speed of 140 km/h by approx. 0.2 litres per 100 kilometres or 5 grams of CO2 per kilometre. Today there is no measure that cuts this much consumption at such low costs. To achieve the same saving with lightweight-construction measures in real traffic we would have to reduce the weight of our cars by at least 50 kilograms, and at a motorway speed of 140 by as much as 200 kg.

What improvement have you achieved in the course of your career? 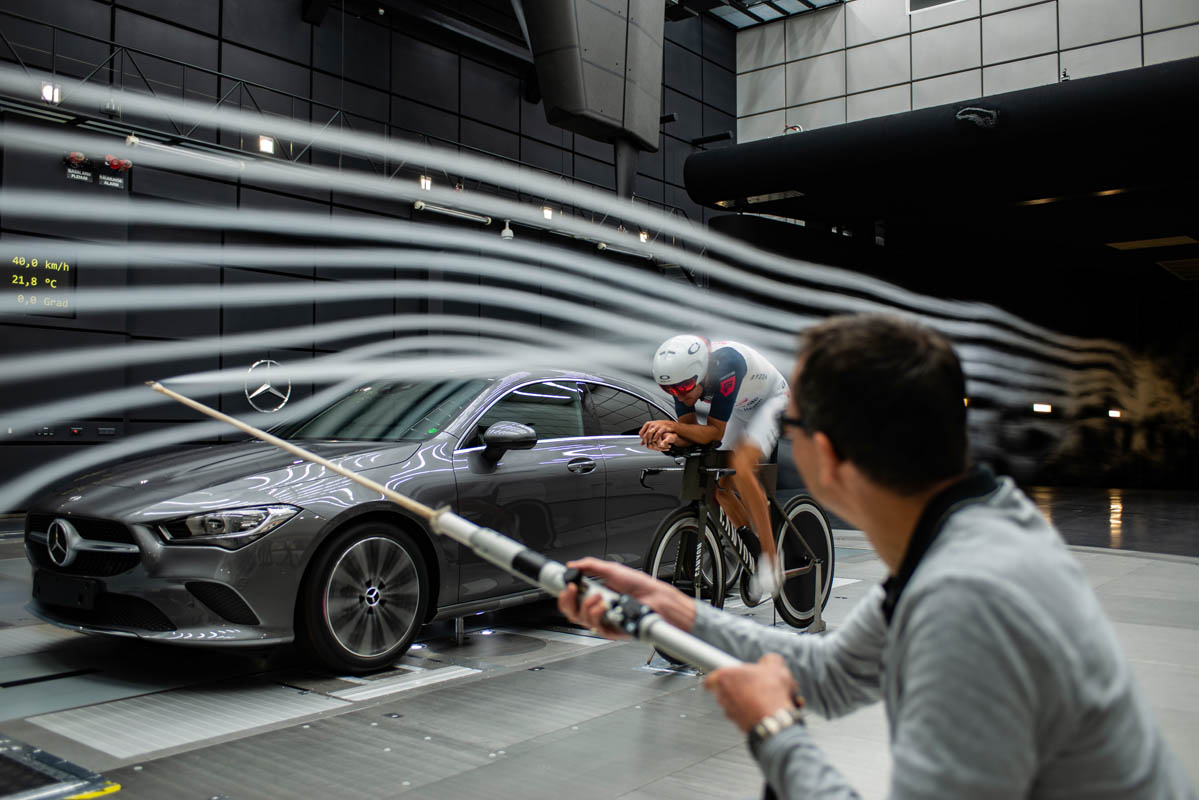 JF: In the last few years we have concentrated on working on the bike itself with my bike partner Canyon and we have improved the handlebars and the cockpit. We also tinkered with my seat position and developed a new helmet too. This all resulted in successes. But you also always have to keep an eye on the biomechanics. Because you also have to put power on the pedal too and above all in an Ironman you have to be able to stay in the seat position for 4 hours. It doesn't help one bit if you save 10 W of air resistance in the wind tunnel but the position is then so "uncomfortable" that your performance decreases by 20 W or you can't run properly afterwards. Finding this balance and the perfect point between aerodynamics and biomechanics is our biggest challenge. 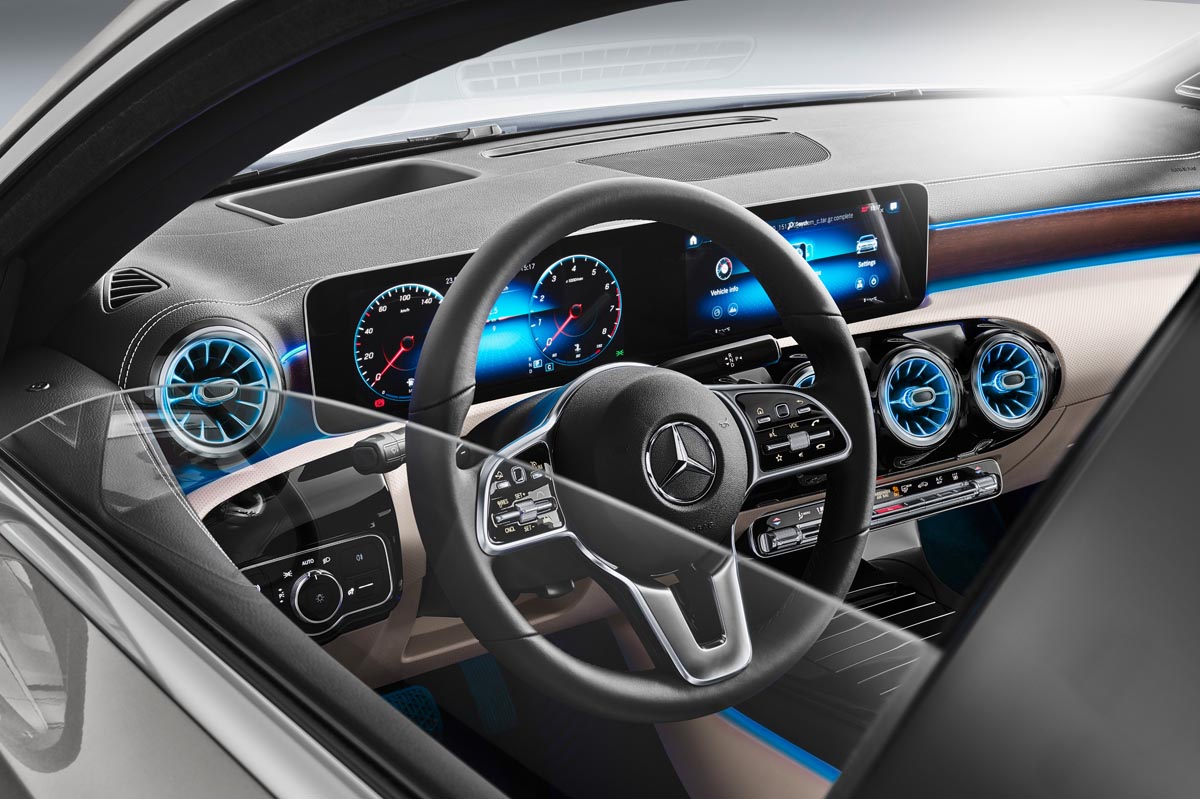 A look at the interior of the A-Class sedan.

DTW: We also have a conflict of interests with different demands when it comes to a vehicle – that's why not every model is always more aerodynamic than its predecessor. But generally speaking we have made huge progress in the last few years. One spectacular example is the leap the SUVs have made, from the first M-Class with cd 0.40 to the new GLE, which achieves a new best cd figure in the segment, 0.29. In this period the saloons have clocked up an improvement of some 20 percent. In recent years we have made great progress thanks to the digitisation of the development process, as calculations are very much faster and much more refined. Digital vehicle models nowadays have over 100 million cells, and can produce results overnight with a precision of over 99 percent. Not that long ago, this same simulation would have taken 6 months and would have been very imprecise. Then there is the fact that today we collaborate very well with our colleagues from Design and we have developed a huge mutual understanding. And it certainly makes us proud that we are setting the trend for the entire car industry in this field.

And where are the improvements taking place? 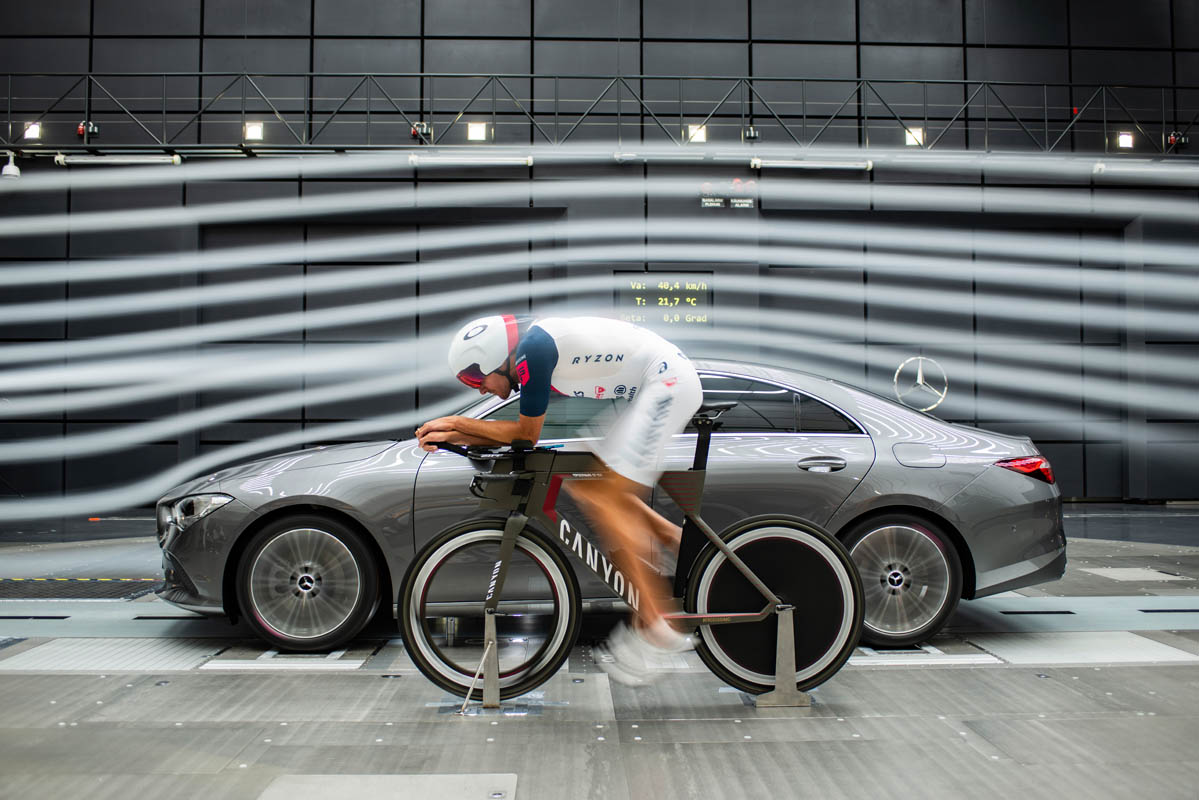 JF: Take a look at my current racing bike. My partners at Canyon really took care of every last detail. For instance, my Speedmax CF SLX has a tailor-made cockpit: in order to keep the frontal area as small as possible Canyon milled a special attachment that sits in the centre of the stem. And Continental made me a special tyre with the low rolling resistance of the GrandPrix TT and the reduce wind resistance of the GrandPrix 4000 S2: through the profile in the tread the wind dissipates faster, which saves one to two W compared with the smooth tread of the TT. 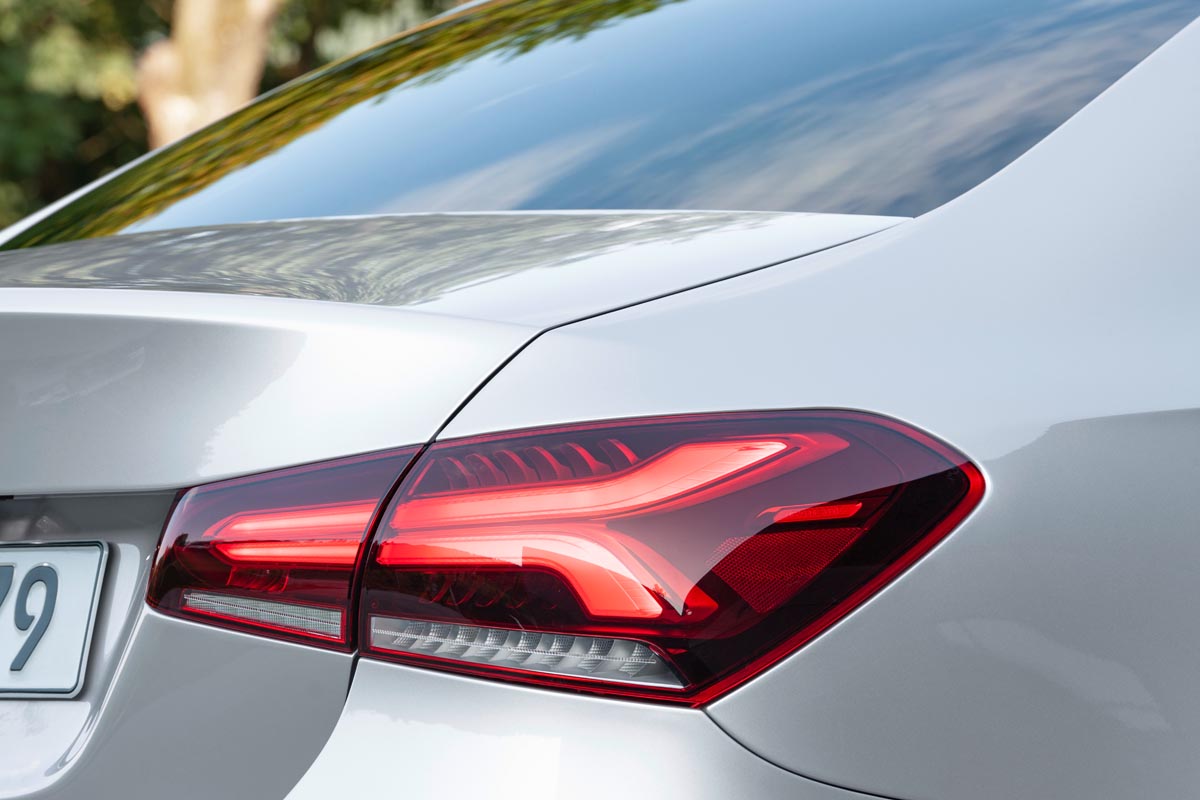 DTW: This encompasses three areas – the air flow through the engine compartment, the air flow around and within the front wheels, and the underbody. These measures include, for example, the latest generation of active radiator shutters, a complex interplay between 3D wheel spoilers, slotted wheel arch liners and aero wheels, fully trimmed underbodies and also the active level control system on some vehicles. But we take a close look at every nook and cranny of the vehicle, from the front apron with all its edges and apertures to the small spoiler lips in the lenses of the tail lights, to perfect the breakaway of the air flow at the rear.

Will the development then continue or has the end of the road been reached?

JF: Development is always ongoing as long as weirdos like me are so obsessed with every detail. If you want to win you have to be better than the rest. And this means that if you stand still you fall behind. We constantly have to learn, measure, buy, develop – and start all over again. 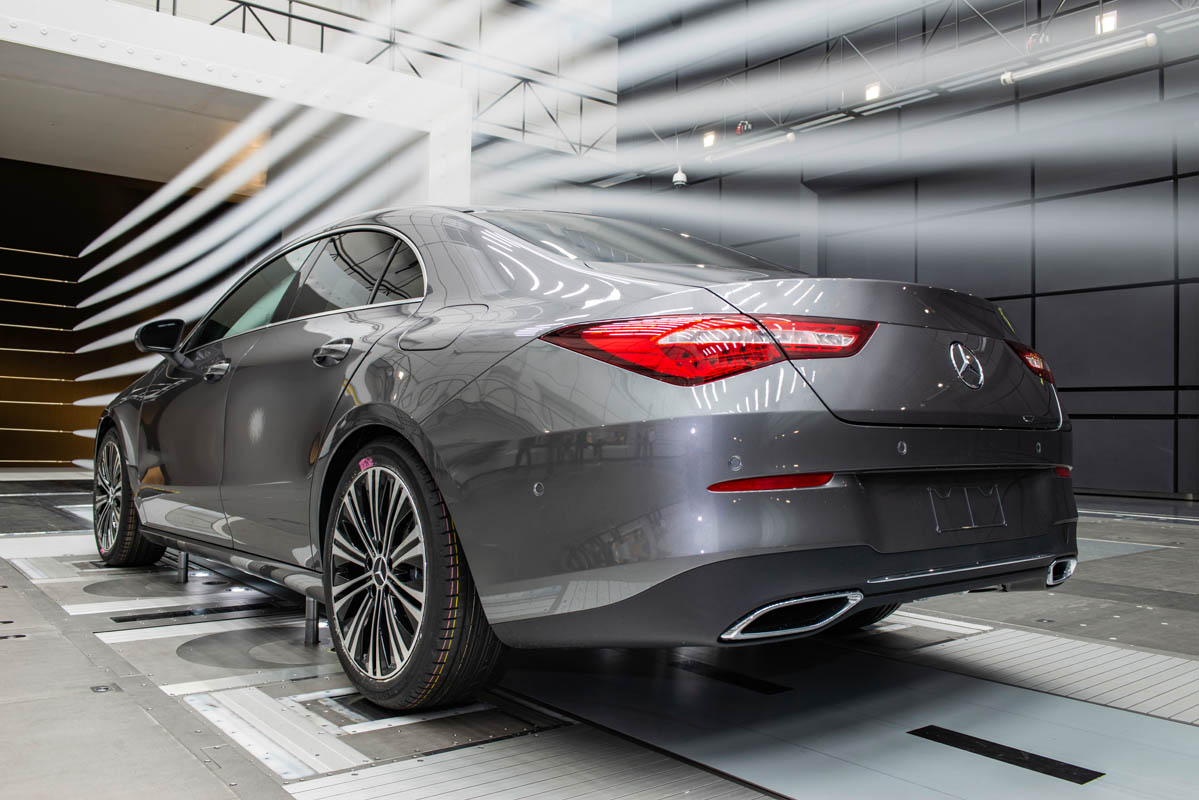 DTW: And that is precisely our attitude too. Our company motto "The best or nothing" amounts to the same thing. Of course we are gradually approaching an asymptotic limit if we do not dramatically change the appearance of our cars, e.g. by making them much longer and sleeker, and equipping them with slim rear ends and narrow wheels. Fortunately, however, we can always still find details where improvements are possible — both in the wind tunnel and, increasingly often, on the computer. After all, aerodynamics is the most efficient way to even more efficiency.

Click here to learn about the improvements made to the A-Class sedan.

And here for more about the all-new CLA Coupé.

Sell your car through Carsome when you're ready to buy that shiny new ride!