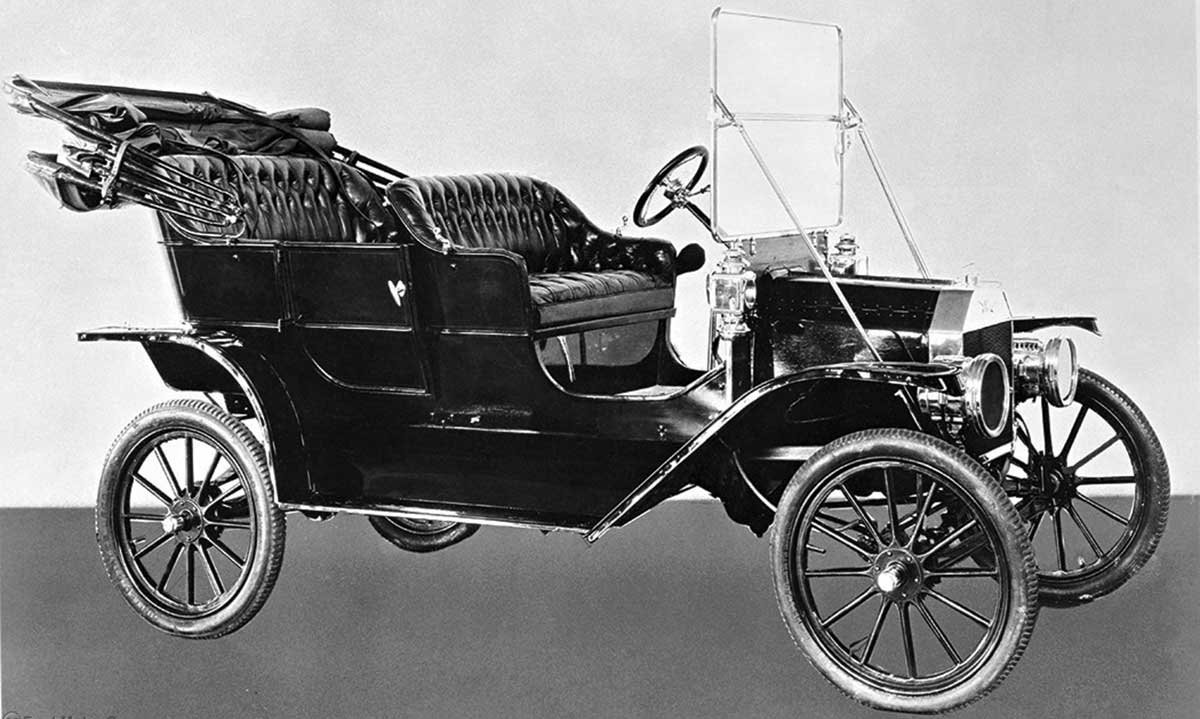 The automobile today has been long regarded as the measure of human progress. It is in this progress that distances now are counted in minutes instead of kilometres. But how did we get here? From the early 1800s of Francois Isaac de Rivas’ vehicle to the petrol and diesel engines of Nikolaus Otto and Rudolf Diesel, the automobile has seen iterations from Karl Benz’ production vehicle to Ransom E. Olds’ modern assembly line. Yet without the accessibility and mass production of Henry Ford’s Model T, we wouldn’t have the automotive industry with over a billion different vehicles on roads.

Who started the Ford Model T? 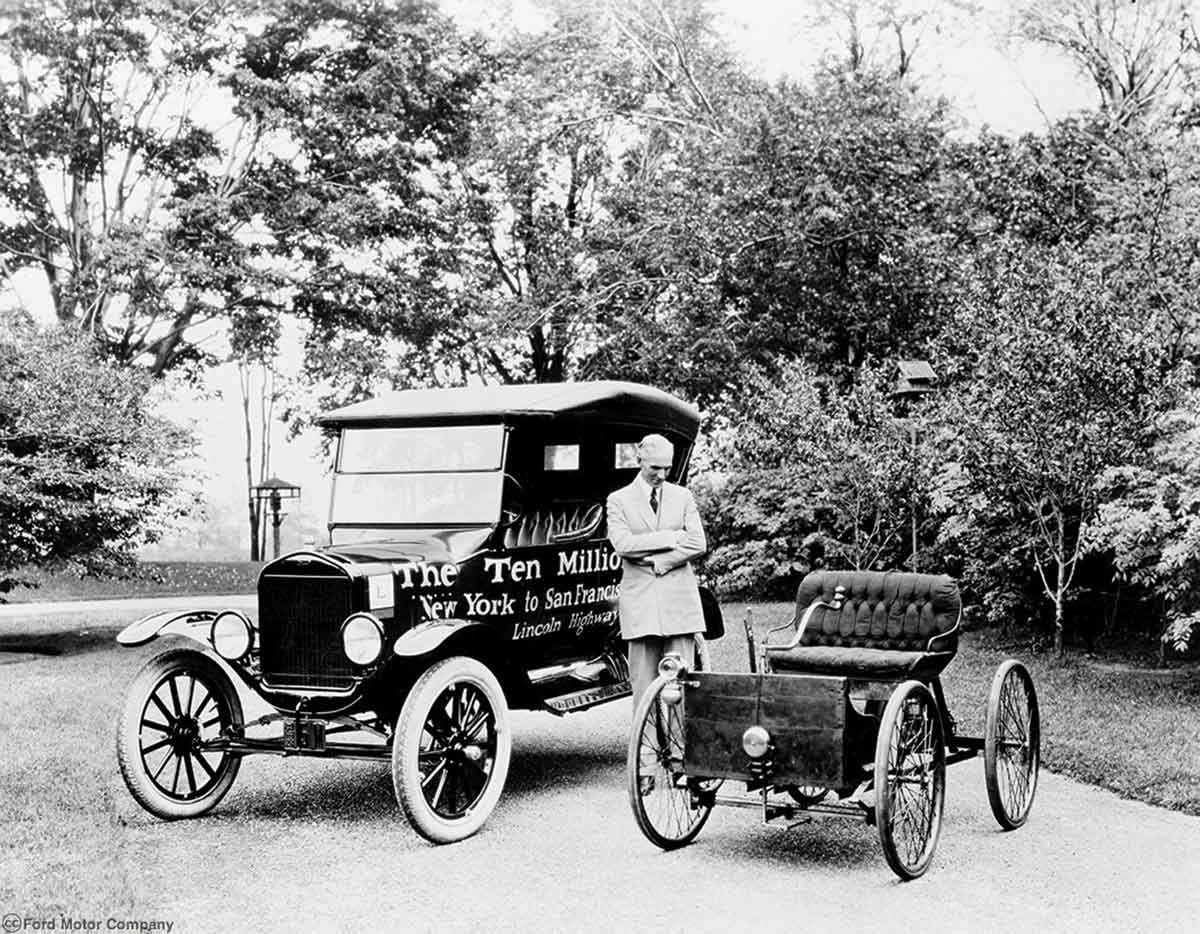 Henry Ford with the first car he built, and the 10 millionth Model T. Credit: Ford

Henry Ford (1863 – 1947) was an intuitive engineer from Detroit who acquired a deep understanding of manufacturing techniques. Before the Model T, cars were a rarity on the road and was reserved as a luxury item for the affluent. In 1908, the Ford Model T cost $825 or $18,000 in today’s dollars, which began as one of the early cars in mankind’s history.

Made for the ordinary people 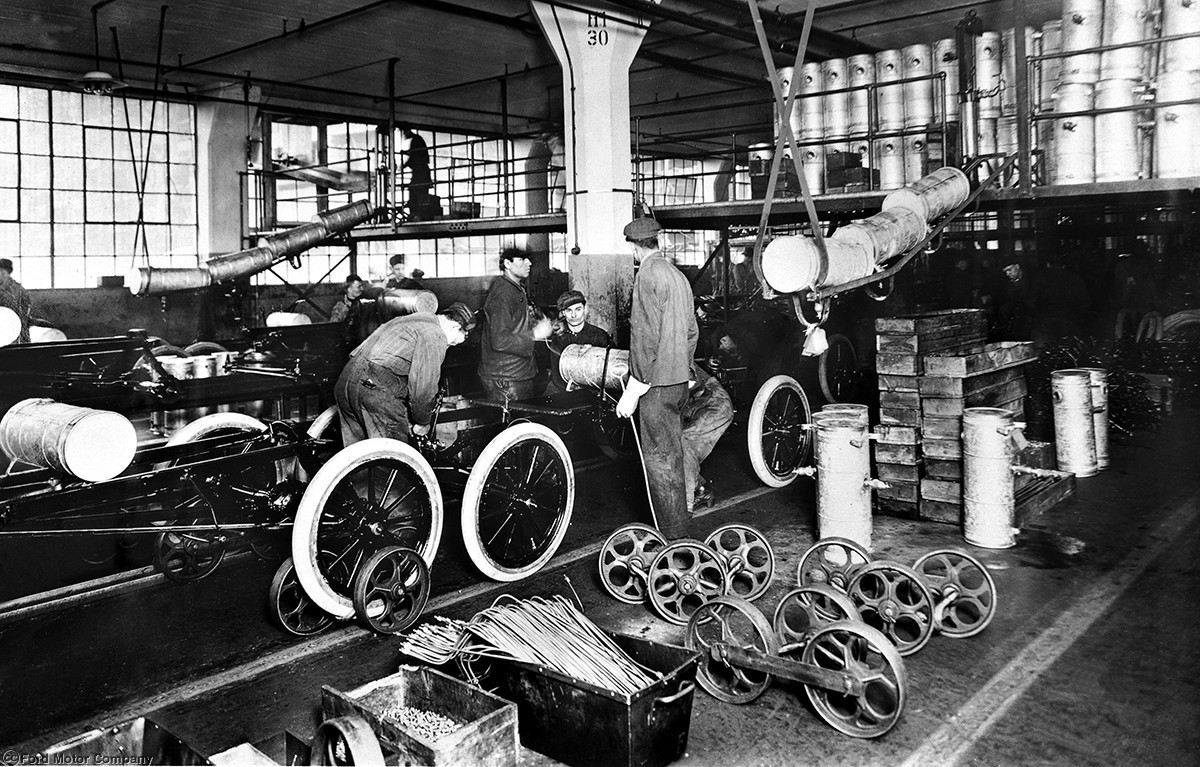 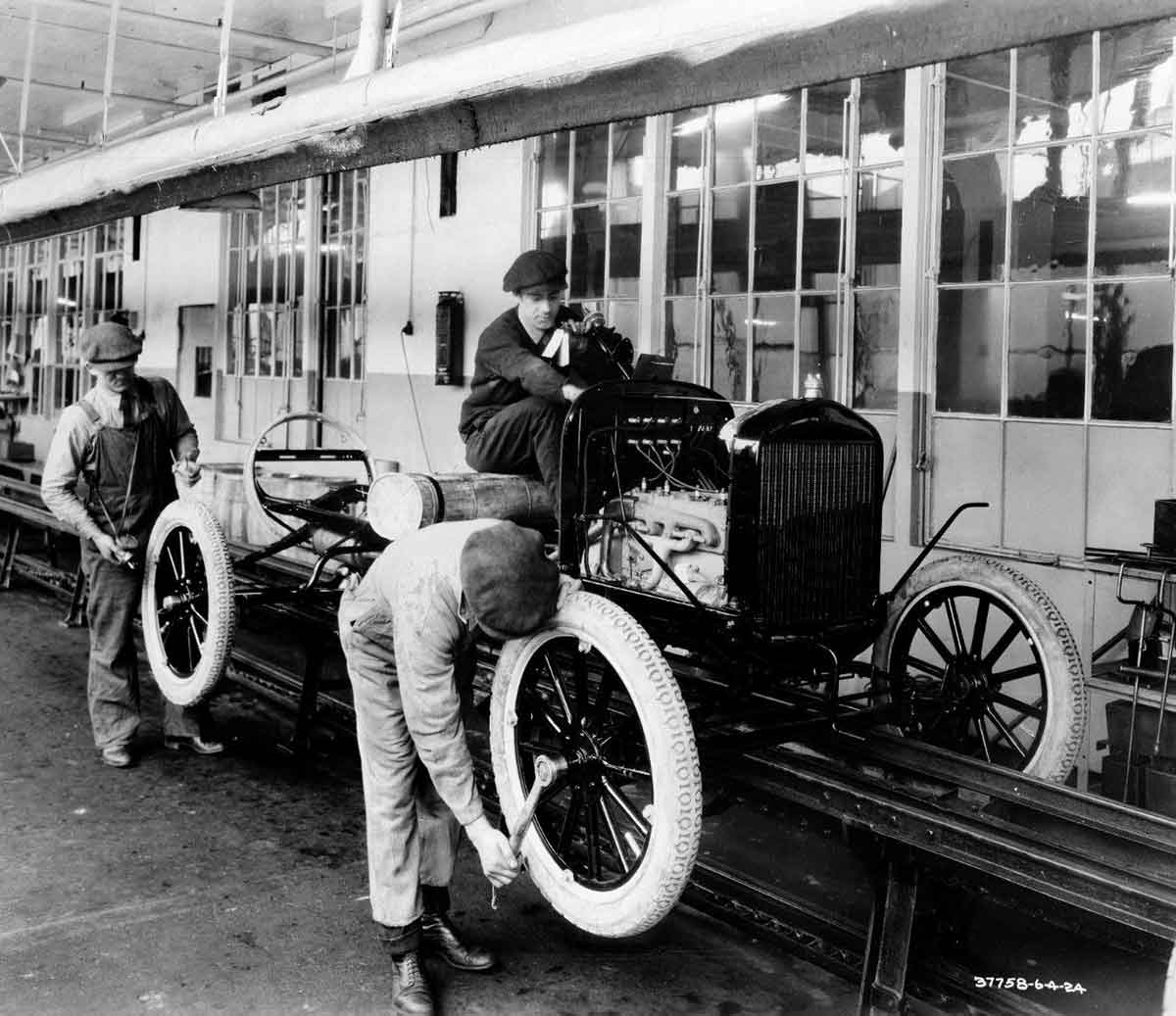 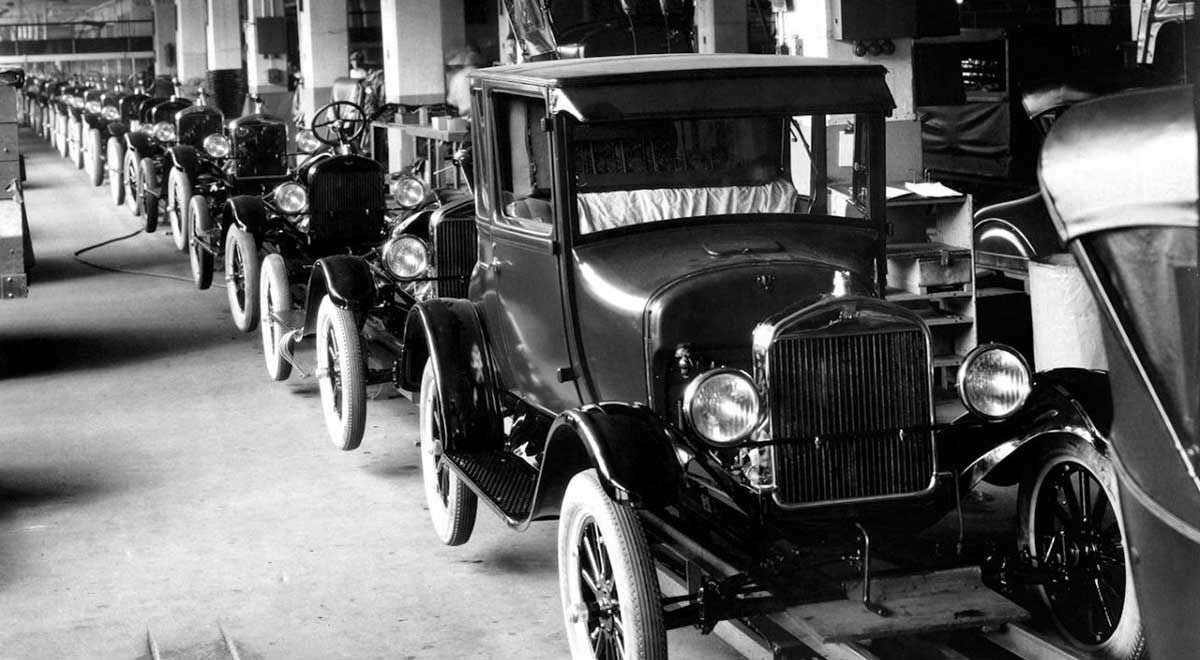 The car had 22 hp, four-cylinder engine and was pioneered by French race-car makers. Weighed just 544 kilograms, it could go as fast as 64 km per hour running simply on gasoline. There when oil prices dipped in early 20th century, Ford kept prices low by building just one model. 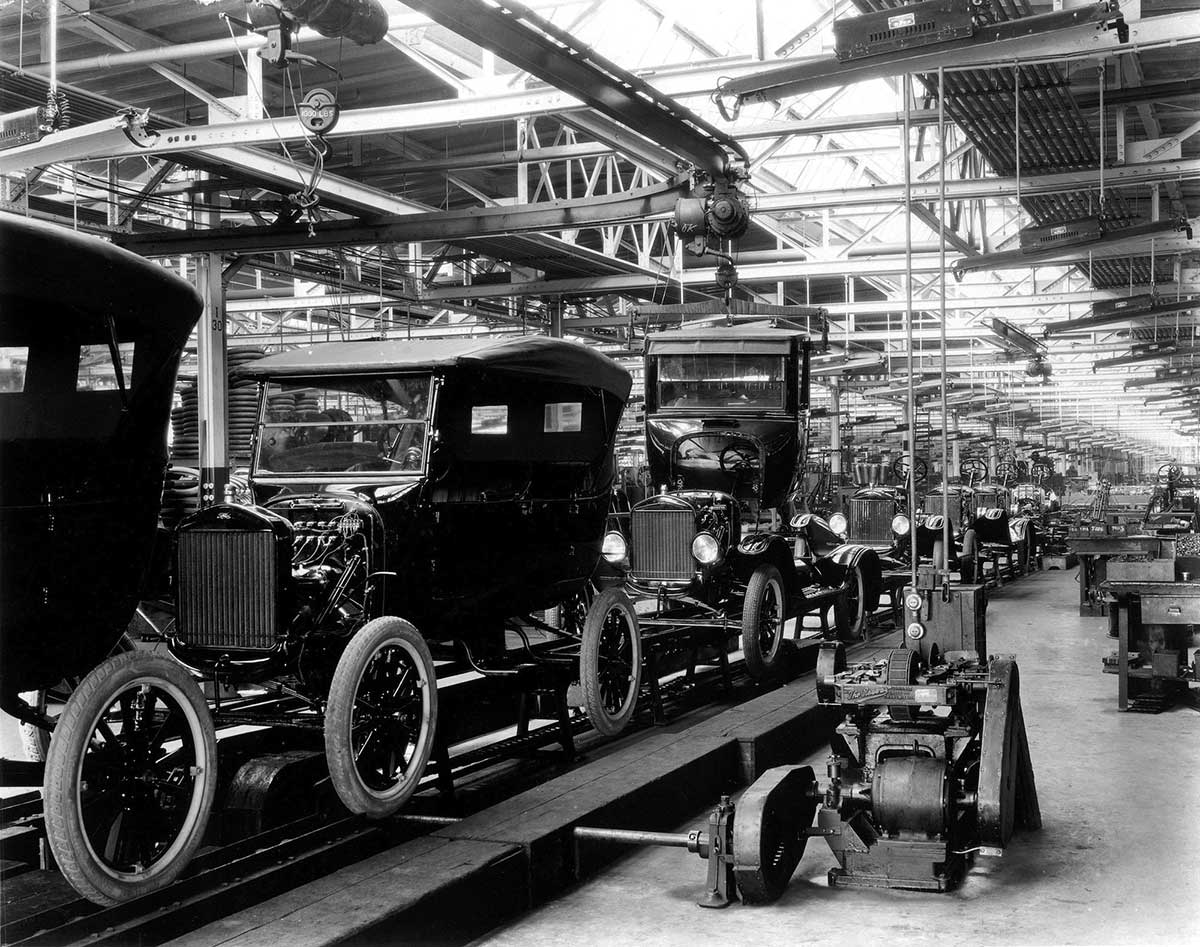 Ford developed a system of interchangeable parts that reduced waste, and made it easy for unskilled workers to assemble the Ford models that started a chain for the Ford Model T. Henry Ford introduced the moving-chassis assembly line in 1913, cutting the 12 hour time to build a full vehicle to a mere 2 hours and 30 minutes. It started a revolution, where workers built motors and transmissions on rope-and-pulley powered conveyor belts that carries the chassis, body parts, little bits and pieces that hasten the entire manufacturing process.

What the Americans wanted

By the 1920s, many Americans weren’t just interested in a durable, well-made car. They wanted something different; something that they could be proud of. Americans wanted optimal speed, luxury and most of all, a simple car that could transport them to their intended destination. This changed the use of horse and carriage to motorised transportation.

The flexible, well-sprung Model T was most at home when driven in the unmade rural roads and most city roads of the time.

The Model T is the first vehicle that provided the base for motorised transport application at its infancy. Considering that over 15 million Model T’s were made, driving the Model T with its three pedals, solitary hand brake and throttle lever in the modern day would be truly complex. Imagine that the center pedal would engage the reverse gear, with the right pedal; the brake. 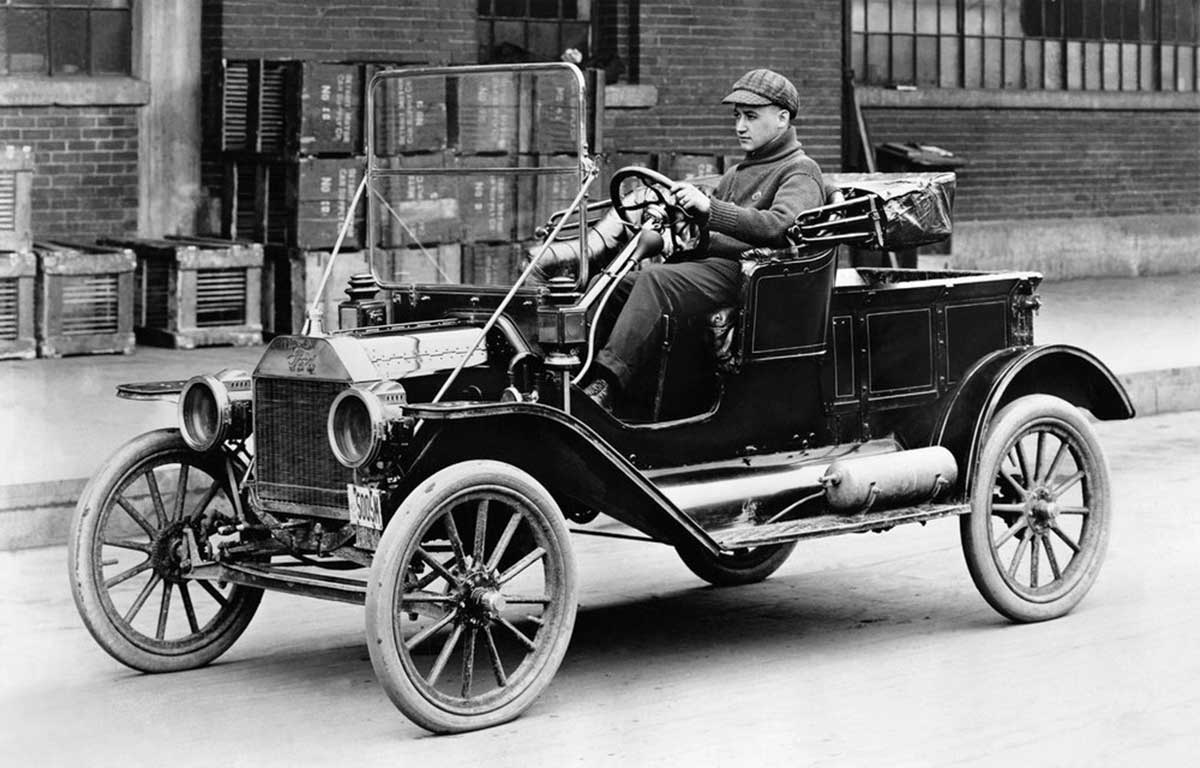 On application, stepping on the pedal all the way to the left, move the throttle lever to “give it the gas” and gently move the floor lever forward. Once it’s moving, move the right lever up, let off the left pedal to give it more gas to shift into high. 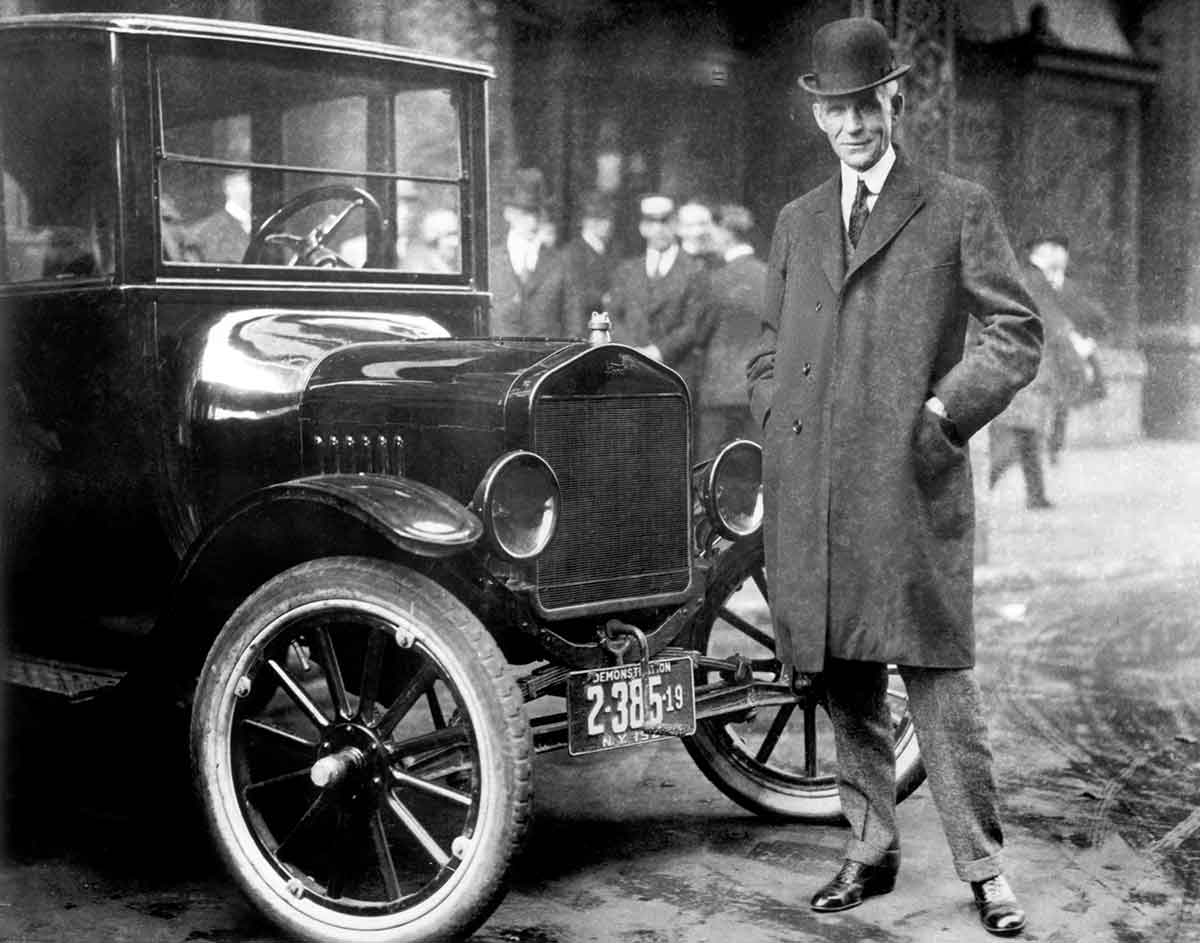 Henry Ford, the man who defined and transformed the middle class of America. Credit: Ford

The assembly lines that Ford put in place included things such as timing employees with stopwatches, shaping up their overall punctuality and accuracy at work. Then in 1913, Ford had to employ over 40,000 new hires just to reclaim 13,000 workers back on the job. In order to reduce his employee’s turnover rate, Ford decided to pay his employees more just so they wouldn’t quit. It was a plan that did not seem to make any sense at that very moment, but it certainly helped in keeping productivity up and beyond the expectations of Henry Ford. 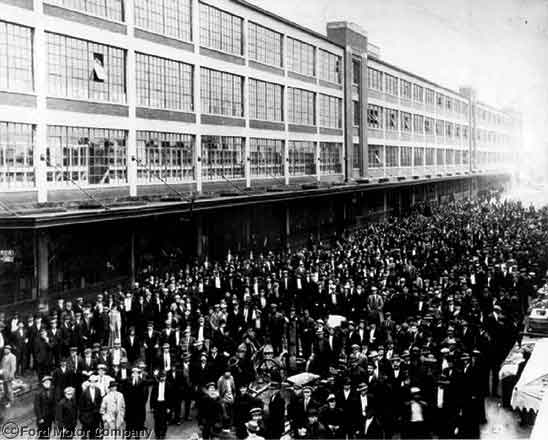 The Model T had a great significance as a symbol and advertisement for Ford’s production-line techniques and became a phenomenon worldwide. Thus, the eighteenth-century Scottish philosopher Adam Ferguson wrote, ‘Mechanical arts succeed best under a total suppression of sentiment and reason’. Ford and his methods impressed both Adolf Hitler and Joseph Stalin which may have given inspiration for the birth of Volkswagen in later years.

Volkswagen has been around for decades and took pride too in building cars for the people. Click here to read about the 40th anniversary of the Golf GTI.

Do you have a car to sell? Evaluate your car by filling out the form below and get started!