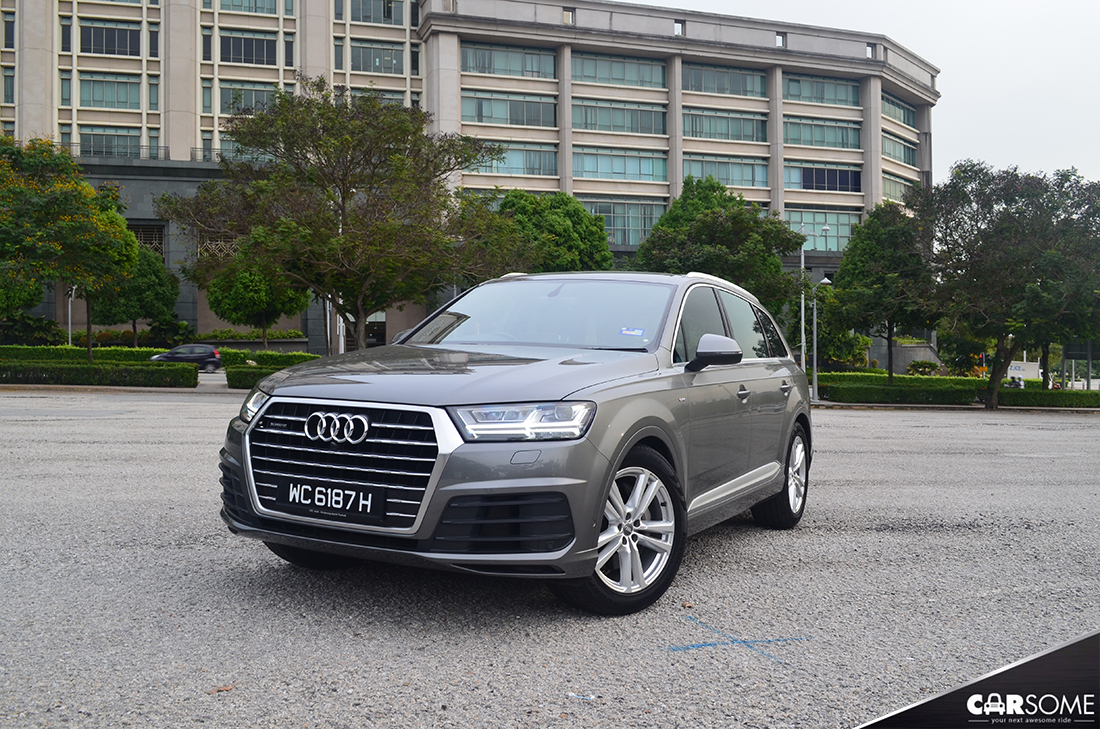 If you didn’t already know, Audi’s four interlocking rings logo represents the original four members of the Auto Union – Audi, DKW, Horch and Wanderer. The Audi brand as it is known today, was one rebirthed after its current parent company Volkswagen acquired the name in 1965 and further merged it with NSU Motorenwerke AG in 1969, officially bringing the Audi brand into the modern era.

Since then, the company has progressed over the years with involvement in motorsports like rallying, touring and the 24 Hours of Le Mans – the latter most being its greatest achievement with 13 manufacturer wins to date since 2000. Of course these recognition wins are, in part and parcel of the brand’s renowned quattro all-wheel drive system that shined in two dozen WRC victories thanks to Audi’s Quattro cars in various world rally events from 1981 to 1985. 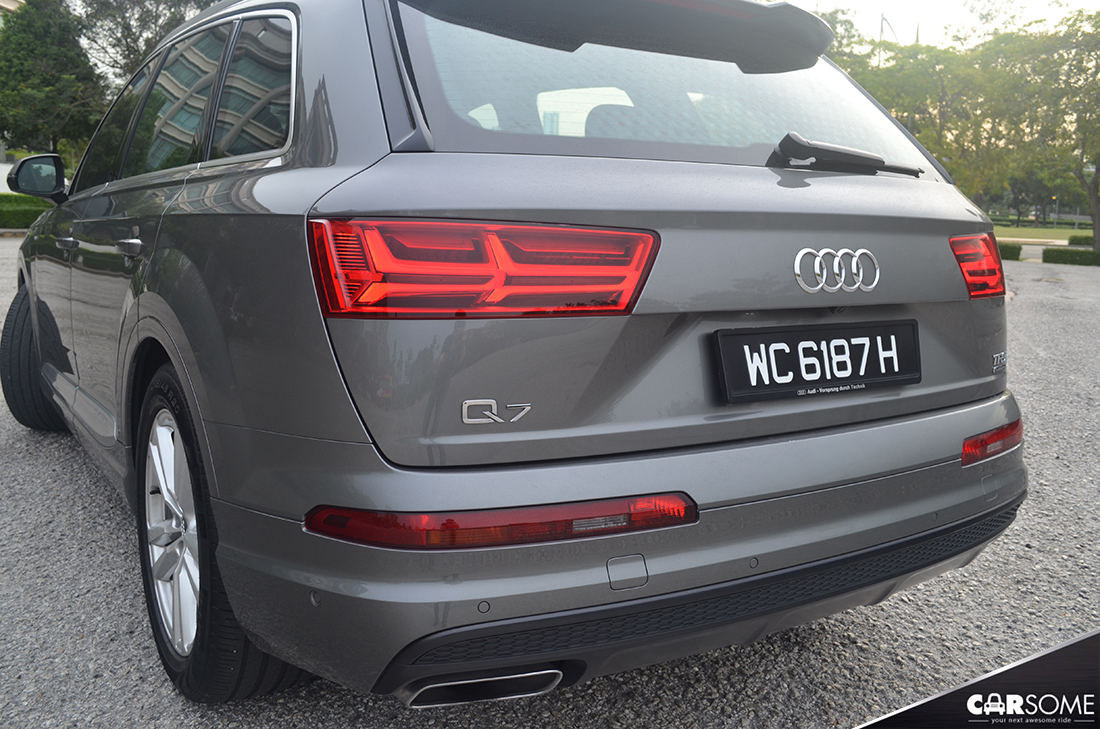 Today Audi has progressed technologically on its range of vehicles including the brand’s latest introduction of its flagship second generation Q7 locally. With seven seats and a whole range of gizmo’s inside, here’s a review of the great quattro Audi. 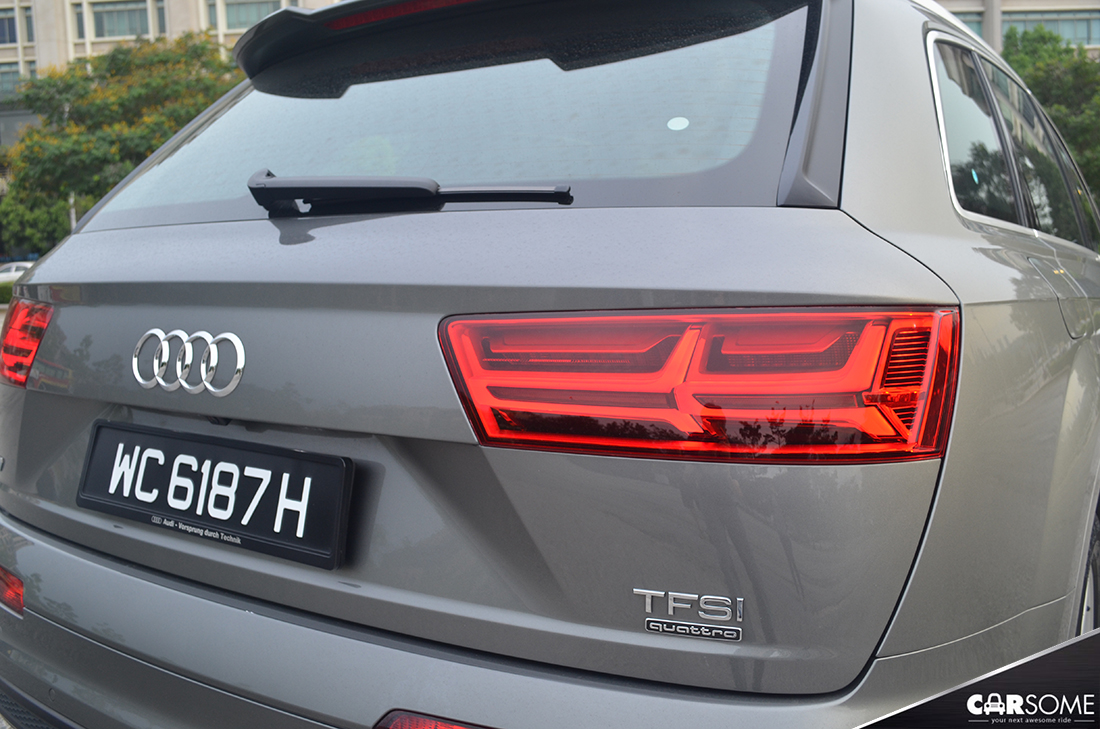 In dimensions, Audi’s latest Q7 is a tad shorter and slimmer than its predecessor at 5.05 metres in length and 1.97 metres in width, but height has remained the same. Compared to the smoother lines and rounded edges on the previous, the current is evidently bolder with sharper lines that show off its athletic appeal. On the front, the singleframe grille with horizontal crossbar is wider and lower than before. With the LED headlights and daytime running lights paired as eyes on the Q7, the units with the turn signals form a double light guide arrow that is the brand’s latest light signature for Audi’s family identity. 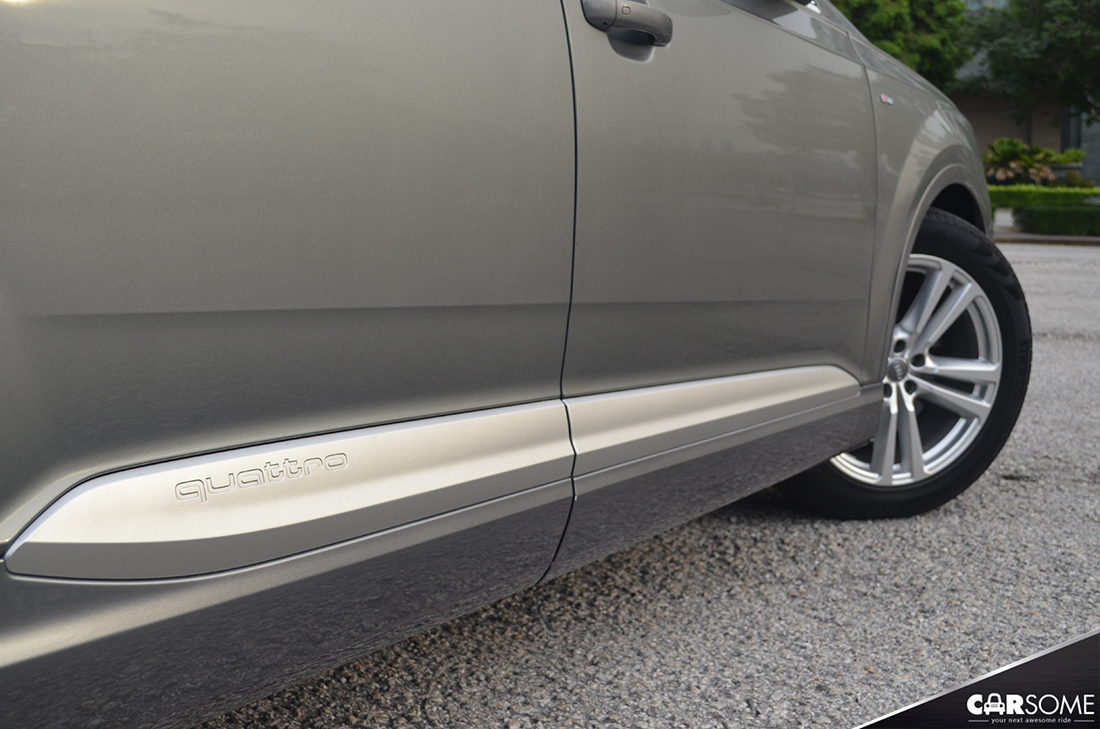 At the rear, the instantly recognisable steeply raked D-pillars across the Q range is seen, accompanied by the tail lamps with the double arrow shape. Within the tail light units, a visual showcase of its three-dimensional appearance becomes a techno feast for the eyes. At dusk, the trapezoidal shaped lights when switched on, takes on a character of their own – with the signal lamps dynamically illuminating themselves inside-out. 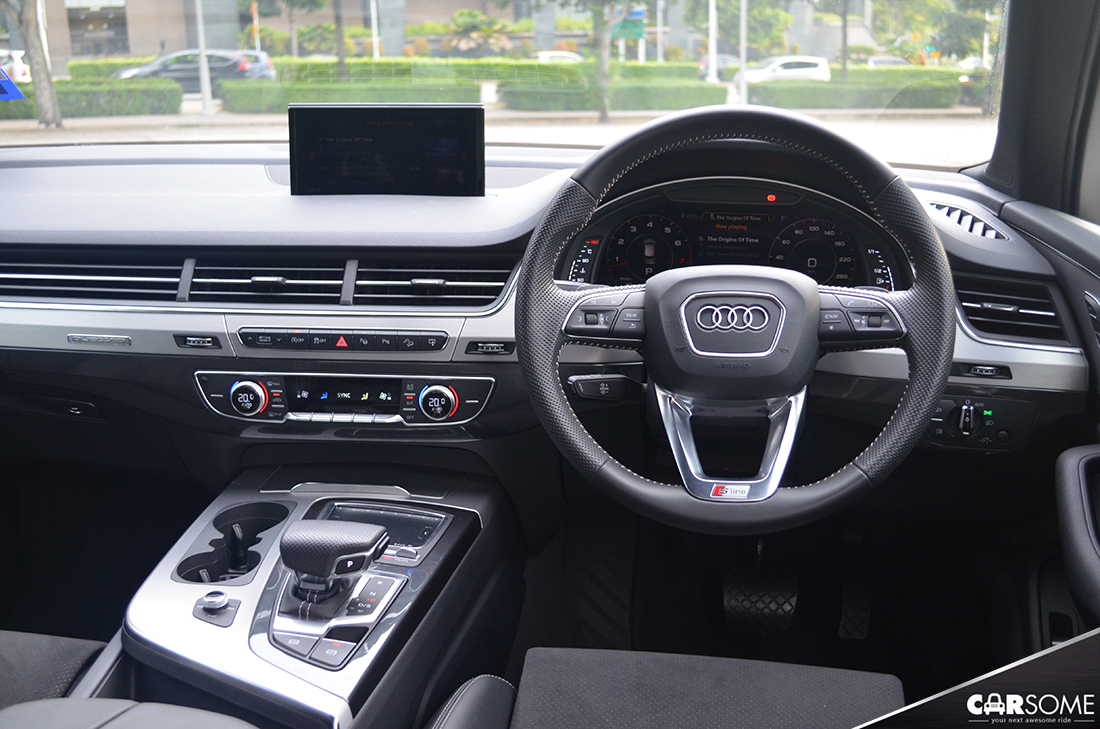 On the inside, Audi Q7 welcomes the occupants into Audi’s latest design language across panels and lines, with the use of premium materials that sets it in a class of its own. Sophisticated elegance is a word we’ll use to describe the interior, heavily injected with technological features from the 21st century. 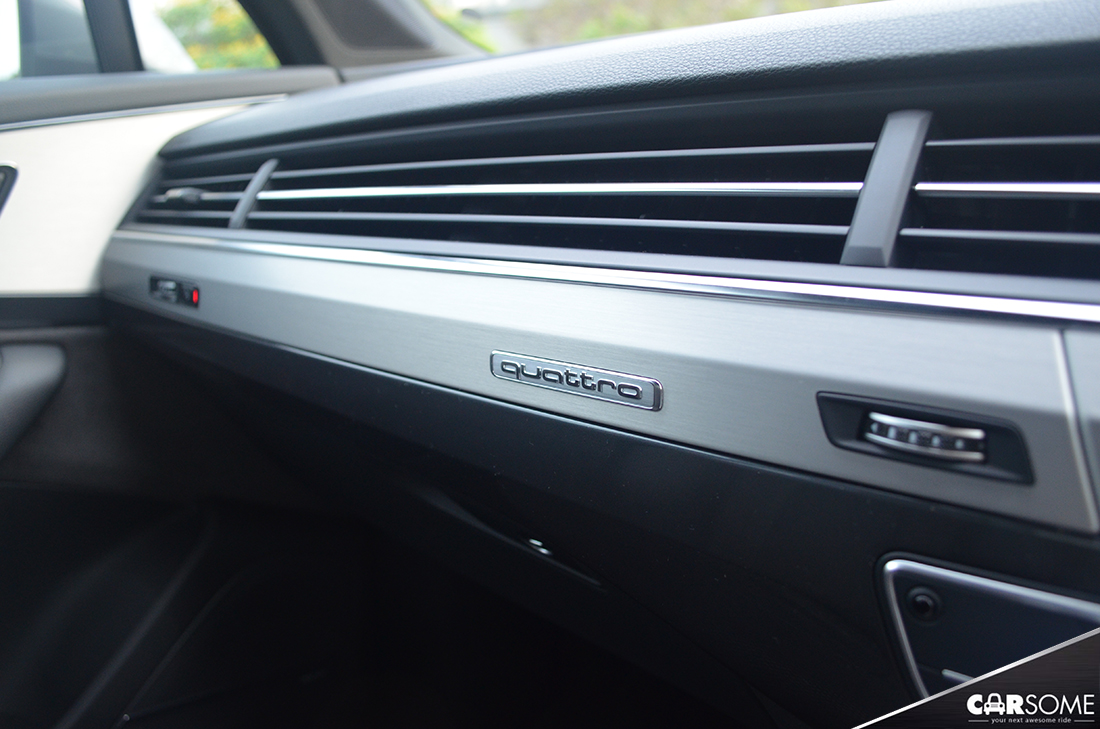 On the dashboard, the complete horizontal line for the air-con vents is formed to be a singular unit, separated only by the respective sections. The centre vent is a functioning unit that can be activated by a button on the dash. The use of aluminium and leather is apparent here, with its application clearly used to highlight the various operational areas such as the shifter, knob and buttons. 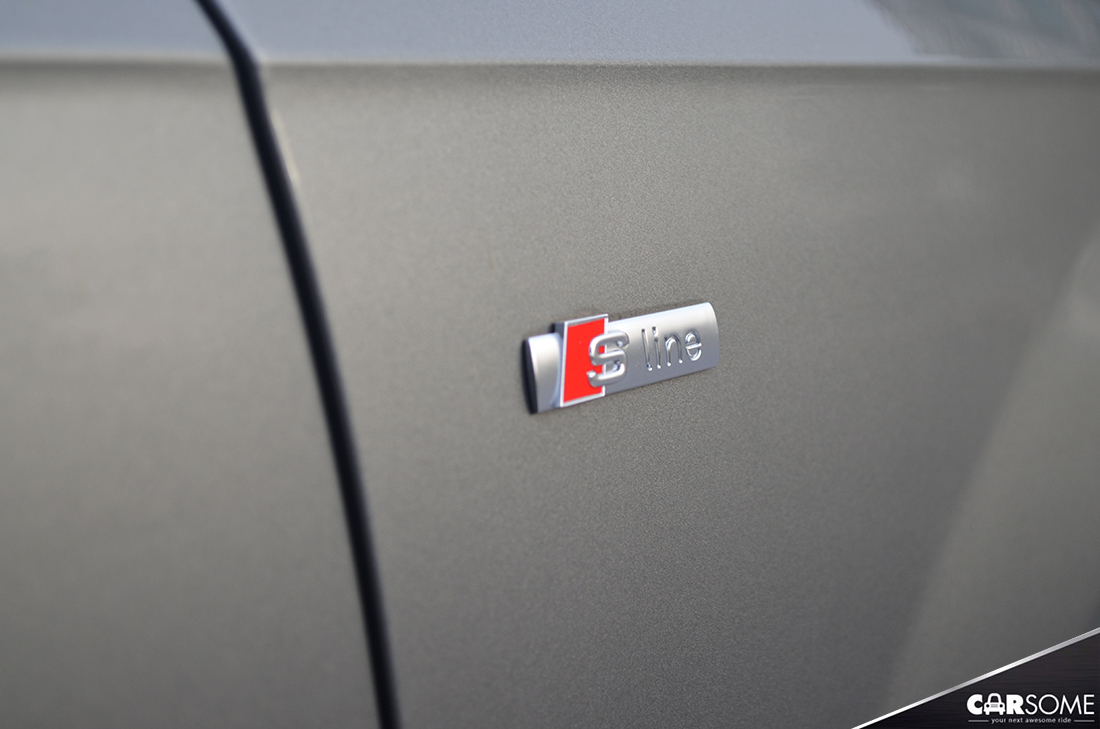 The S-line package that was included in the reviewed unit featured the S-line front and rear bumpers, five-spoke design rims on the exterior, and the seat upholstery in perforated Alcantara with the S embossing on the backrests with the S-line steering wheel within the cabin as the most evident upgrades on a longer list of items. 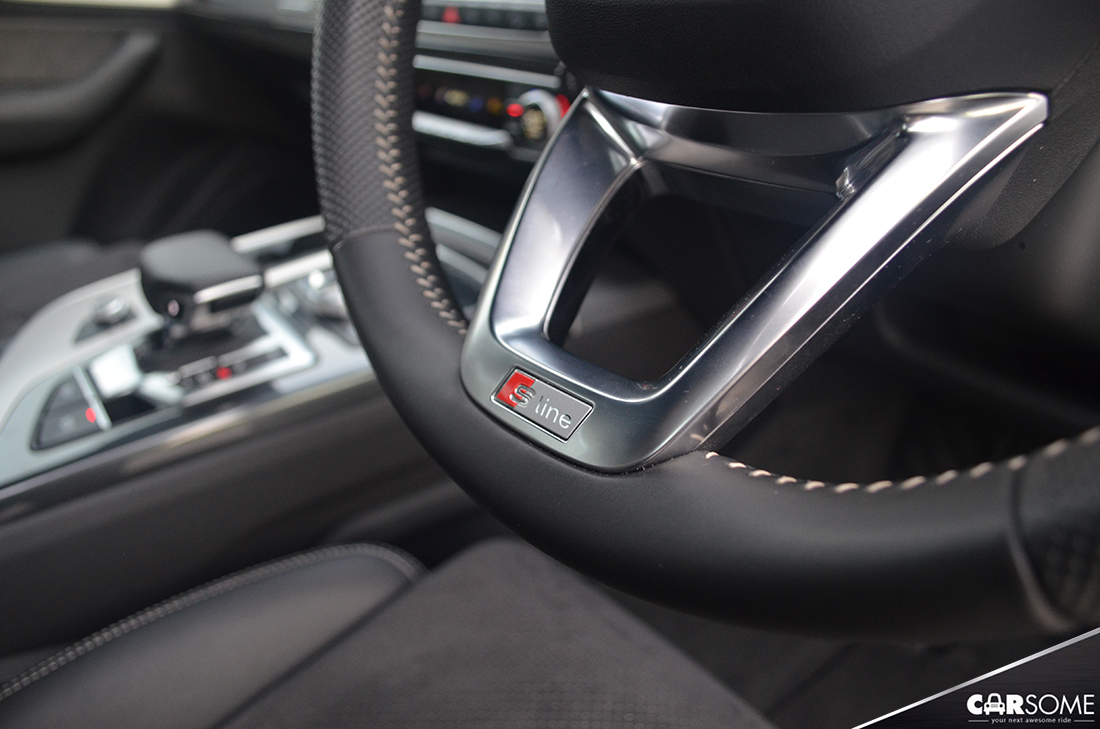 The three-spoke leather steering wheel in the S-line package.

But the closest attention to detail that stood out most for us is the capacitive aluminium switches within the centre console that reacts to the electrical impulses within the fingertips (similar to that of modern touch-screen phones.) The interior ambient lighting that runs through the door panels, centre console and dashboard aluminium trim is most noticeable at night. Customisable from the vehicle’s settings, an option of white, red, blue, green or orange can be chosen, or cycle through the preset drive-select modes. 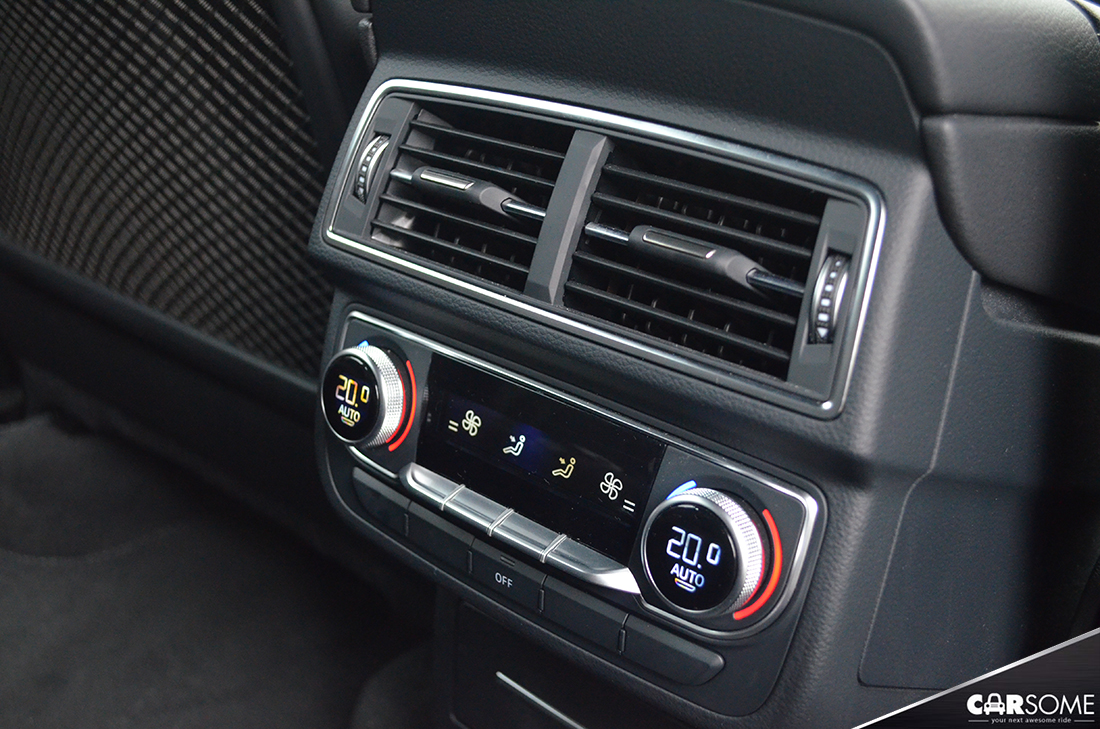 Standard features like hold assist, cruise control, speed limiter, rear parking system with camera and the 360-view of the vehicle is joined with Audi’s pre-sense basic and city safety systems. Pre-sense basic is a preventive measure that tightens the front seat belts, and closes the sunroof and windows while pre-sense city observes the road and warns or applies the automatic emergency brakes should it be necessary.

Park assist is also available, and as standard with the latest systems, can automatically steer the Q7 into and out of parallel or perpendicular-parking spots on either side. 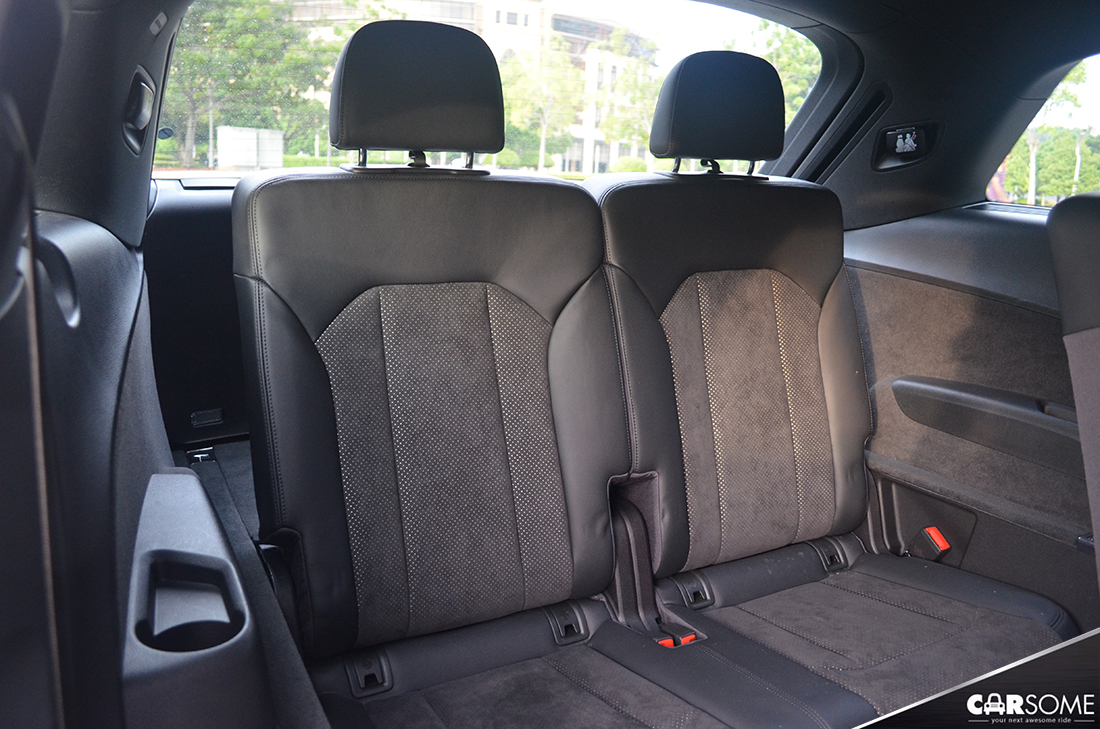 The two centre seats on the third row are electrically operated, and can be collapsed fully for a wider boot area.

The Virtual Cockpit and MMI 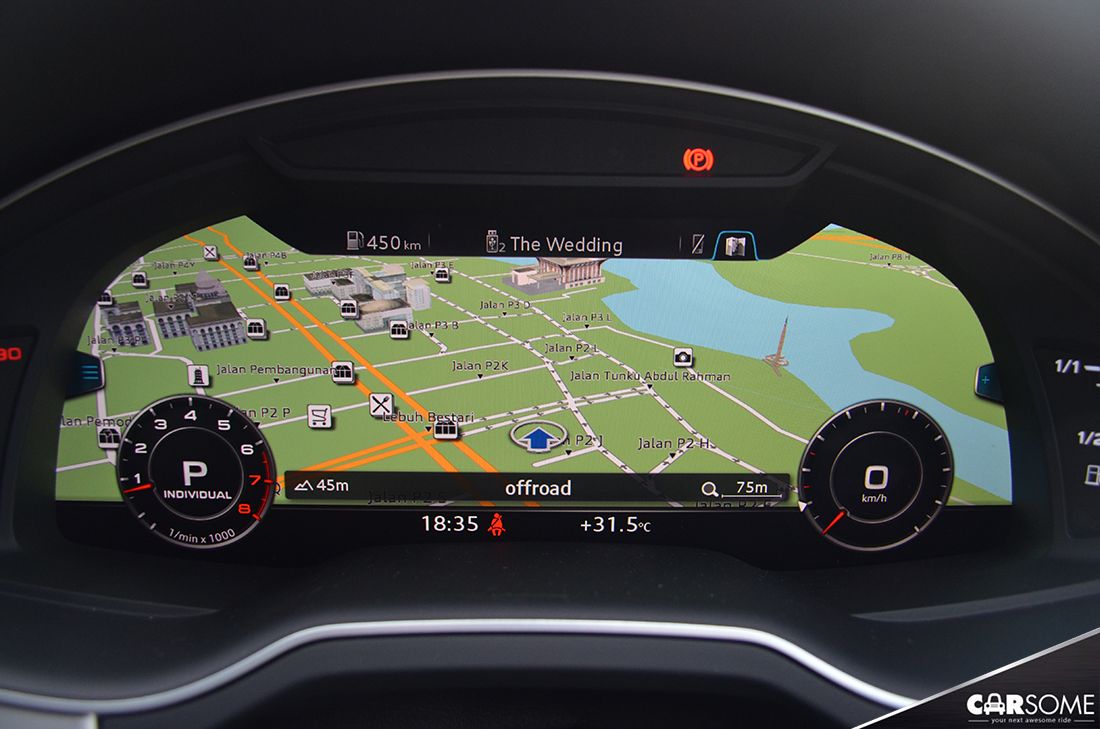 Seen here is the virtual cockpit in its infotainment view, where it opens up to utilize the complete display. At places of interest, the map displays 3D building images.

Audi’s headlining virtual cockpit is easily the singular most important feature for the brand since its introduction seen in the latest Mk3 TT. Replacing the traditional analog needles for tacho and speedometer combo, the 12.3-inch display has a resolution of 1440 by 540 pixels that is capable of recalculating the needle of the counter 60 times a second (similar to the refresh rate on display monitors). The driver is able to switch between a classic or infotainment view that provides a wider centre view for navigation, phone, music or a traditional view of larger instruments in full size. 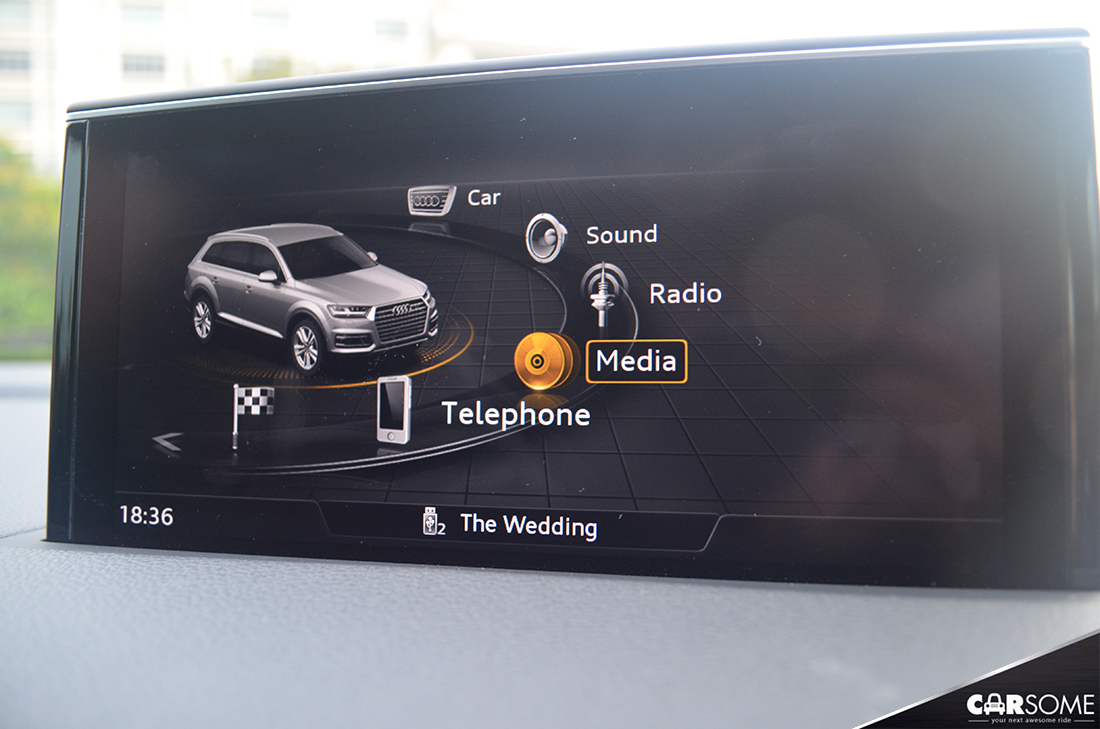 Accompanying the virtual cockpit display for the driver is the 8.3-inch MMI monitor located on the dashboard. Input for the menus are through a glass trackpad, rotary control and two switches for the basic shortcuts to four menus. For a clean look, the MMI monitor can be retracted at any time. 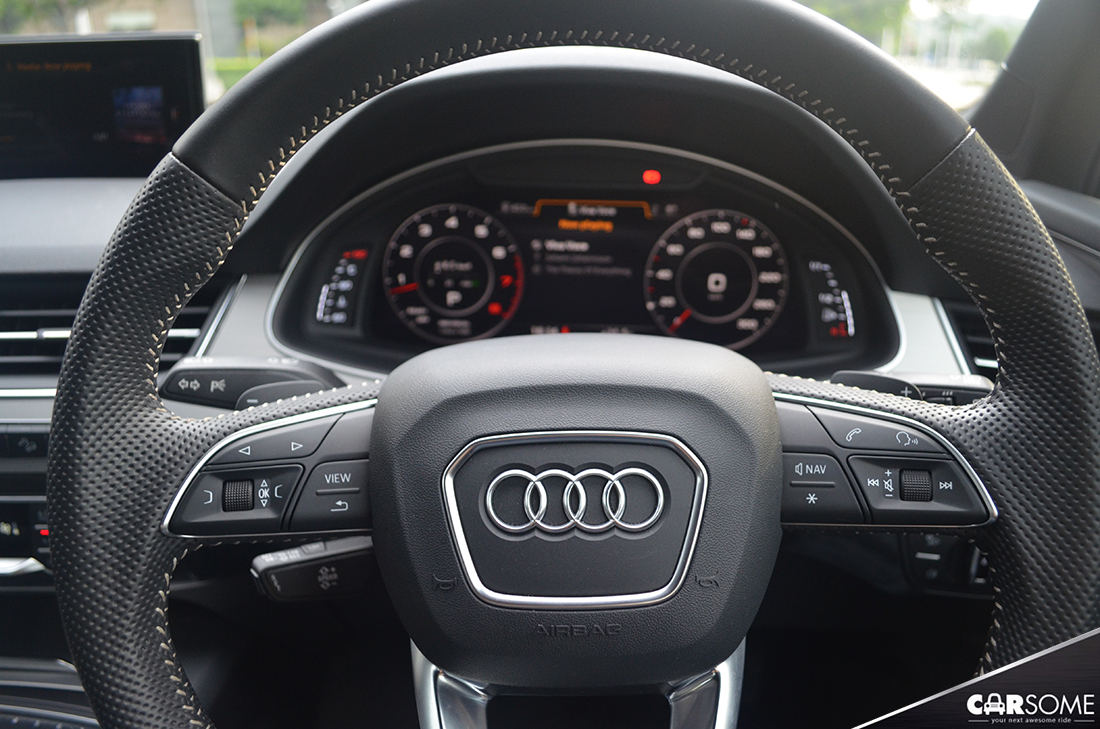 The steering wheel has a range of buttons that can be used to control menus on the virtual cockpit.

Driving the Q7 was a treat for the senses. On paper the 3.0-litre 333 hp engine delivers 440 Nm of torque, and while we’re usually not big on numbers, the pulling power alone thrilled us. The standstill to 100 km/h on paper takes just 6.3-seconds, a feat of possibilities that stumped us considering the unladen weight of the vehicle already stands at slightly over two tons. 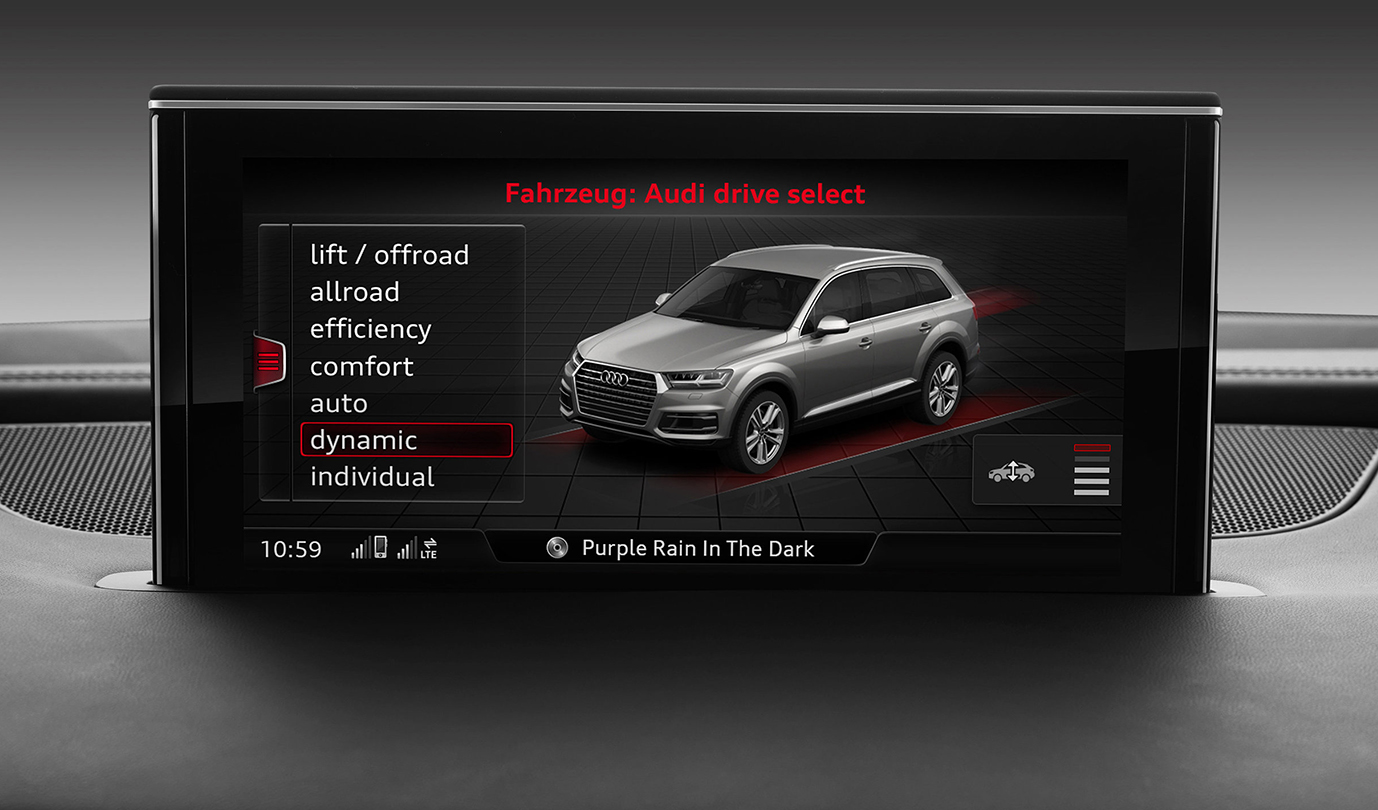 Drive select modes that are available on the Q7. Notice the ride height modes on the bottom right that displays the vehicle’s height.

Noticeable at first is Audi Q7’s weight and size, but after the vehicle quickly grows on the driver, becomes a convenient luxury all-road cruiser. In standard fashion for vehicle’s with dynamic drive select modes, this all-wheeler has options for efficiency, comfort, auto, dynamic, allroad and individual, where the latter most allows the driver to set a basic vehicle response including engine and suspension settings (important to note here, that the individual mode on the Q7 differs on the S range of Audi vehicles that allows a more detailed tuning option.) Throttle response together with ride height and mapping changes with the different modes, as do steering when required. 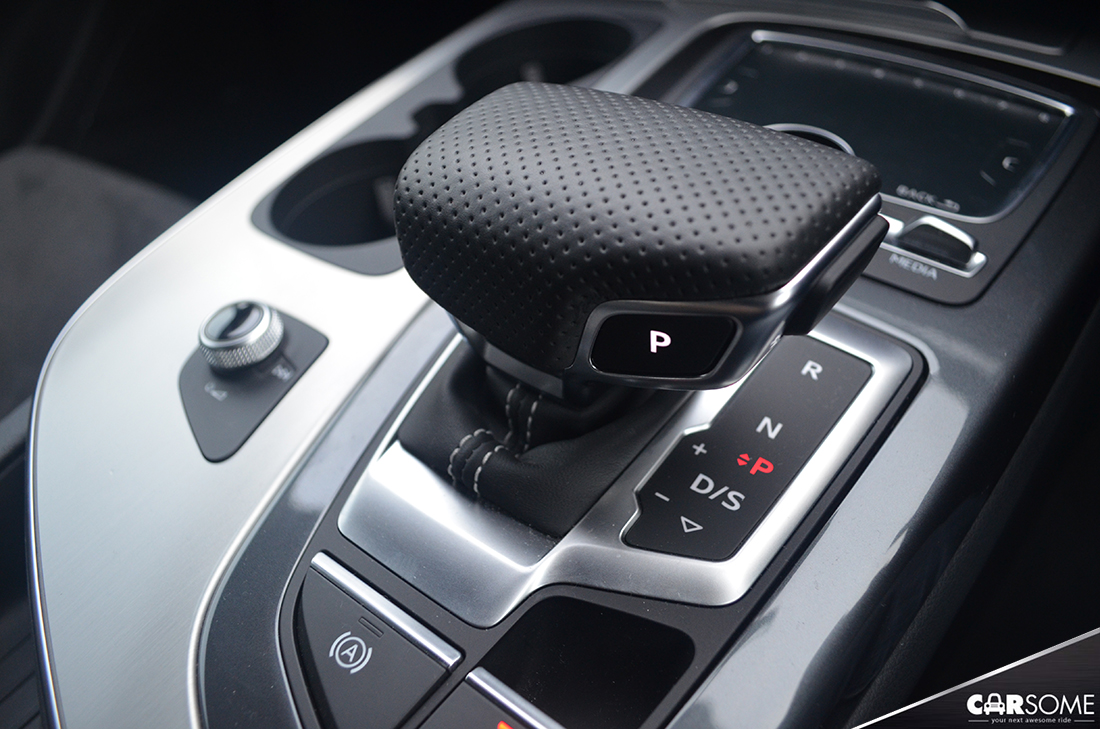 The electronic shifter on the Q7, seen here with the perforated leather of the S-line package.

Dynamically the Audi Q7 performs magnificently like a four-by-four drizzled with honey and cream, smoothly gliding through gear changes, and effortlessly moving through the air as if through a vacuum. The drive is still characteristically Audi, as it provides that refinement in all situations, with the engine management, electronics, sensors and actuators working in harmony yet is able to provide significant feedback to the driver. 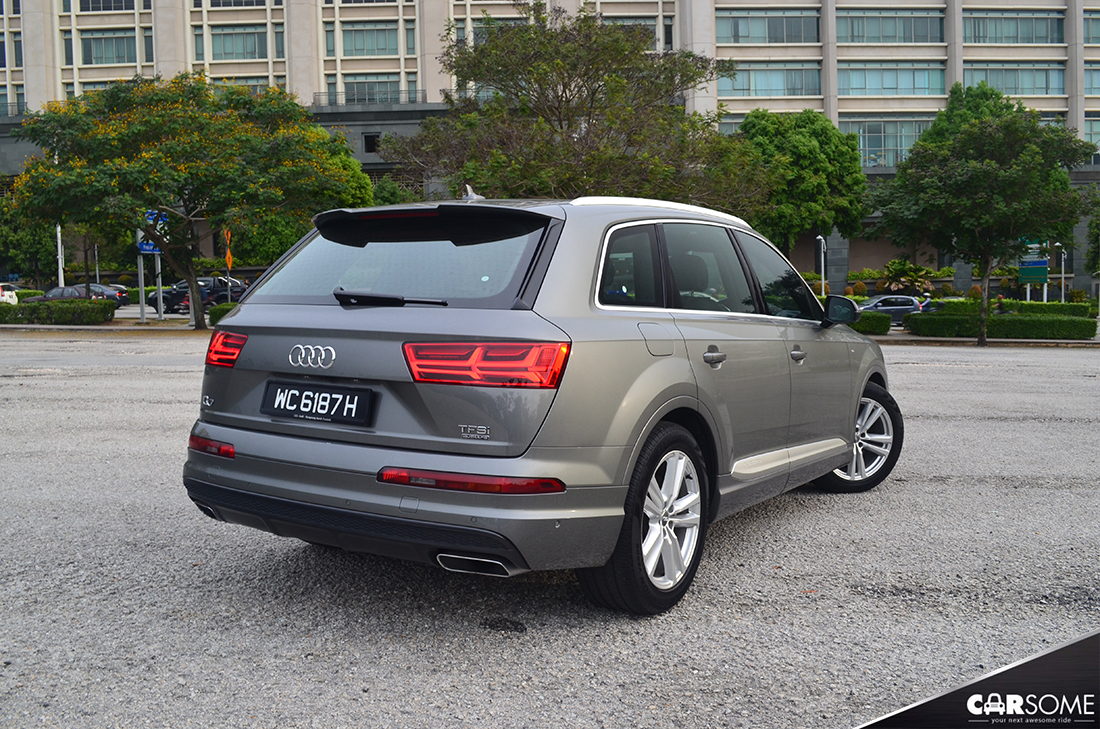 We’d like to go continuously detailing on this review, but we’d really have to end. Audi Q7 in a few words is a feast for the senses. As the company continues to take their vehicles on a path of technological refinement that many are heading to, we can’t stress enough that while its necessary to innovate, carmakers should always focus on the one thing that matters most. A car that’s made for drivers everywhere.