These days, Jiun Ee, or JT as he’s better known within the industry, is also spending his time as Carsome Academy Director. Carsome Academy is a human capital development center and technical institute, where graduates can attain accredited technical certifications that are recognized both internally and externally from Carsome.

From Carsome’s early days to becoming Malaysia’s first unicorn, let’s explore Jiun Ee’s journey from taking a seed of an idea to establishing Carsome and its Academy.

The Beginning of a Great Idea

Prior to starting Carsome, Jiun Ee worked in media and advertising. In fact, that was where he got to know Eric. From there, the ambitious duo started to talk about business ideas.

“Eric is five years older than me, but at the time he was way more successful. I was driving a Myvi, while he was already driving a Mercedes. I wanted to be like him. So that’s where our partnership started.

“Since we were in advertising, we were engaged with many different industries. Back then, we thought about everything from tourism to technology,” said Jiun Ee.

The seed of the idea that would become Carsome was planted when Jiun Ee’s sister faced problems buying a new car.

“We had to go to multiple dealerships, talk to different people and further negotiate with them all to find the best price for a car. That was the biggest pain point for us, and we realized that this was a space that we could start in and disrupt the market.

“I think of Eric as one of my mentors as my story with Carsome began with him. The great thing about our partnership is that we have the same vision from the beginning. We obviously have had our highs and lows, but that is what being business partners is all about,” he said.

As can be expected from any startup, Carsome’s beginnings were not easy. At first, Carsome attempted to solve the problem of price comparison by becoming a middleman. “We wanted to help the customer and the salespeople at the same time. Our approach was to not only help customers get the best price, but also to help salespeople drive traffic to their doors,” said Jiun Ee.

But that plan was scuppered when a major car brand told their dealers not to work with Carsome. “We were considered a brokerage by the brand, and their internal rules discouraged brokering. That was a big hit for us as most of the traffic coming into our website at the time were for that brand’s sports utility vehicle (SUV). We had to rethink our whole business model,” he said.

Eric and Jiun Ee soon learned that they could pivot easily to the used car market. “One of our observations was that people trading in a used car for a new car also faced the same issues – which was how to get the best price for the used car. And this market had even less rules than the new car market. One inspector might rank a car as Grade A, while another could rank the exact same car as Grade B. Essentially, there are no rules.

“It also surprised me that inspections took only 30 minutes. We could earn more in this half hour compared to the months of waiting lists for new cars. So we decided to move our resources to the ‘sell’ part. 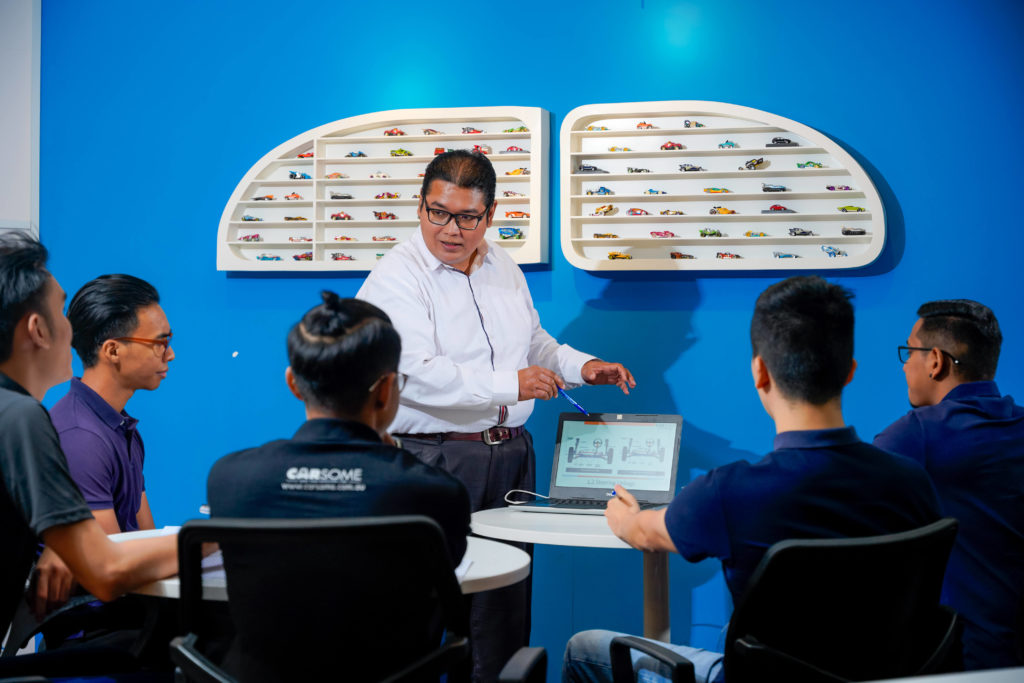 “When we expanded to Indonesia and Thailand, we took one and a half years to study the market. We also noticed that the ‘selling’ side is as critical in these markets. With a few tweaks, we duplicated the model regionally and that’s where we are now. Using that idea, we built a full-fledged ecosystem for the used car market,” he explained.

“We also found that as the team grew, we needed to open up more positions, like supervisors and operation specialists. That’s how we started to learn that we needed to hire the right people to do the right jobs,” he said.

Though its business is primarily online, Carsome was not spared from the lockdown. Jiun Ee explained, “We wanted to scale but we could not move because of the lockdown.”

Hence, Eric and Jiun Ee reviewed the business and found that there was still a gap in terms of people. “We were always concentrating on scaling the business, and we forgot about our basics, which is people,” he explained.

“When we saw the business, we realized that we needed to train our people, especially the inspectors. Because when you look at it, there’s actually no accreditation for motor vehicle inspectors. There’s no certified program in the market for this as well. Seeing how important the inspectors are for our business, that’s where the idea of Carsome Academy came about.

“No other institution or company has this kind of SKM-level program. So we took this opportunity to build Carsome Academy – the course structure, the accreditation, even the center in Kelana Jaya from scratch. It was a challenge setting it up in the middle of a pandemic but we came through.

“2020 has been a blessing in disguise for us as we could take our time to set up the Academy properly. Although it has been a slow process at times, we are the first and so far the only company to offer such a program,” he said.

More than Just an Academy

Carsome Academy is more than just a stepping stone to becoming a skilled technician. It also has a social impact element as well.

“Young Malaysians with only a PT3 qualification can join us for one year of training. The first three months are classroom theory, and the next nine months will be on-the-job training. They will be sent to our retail centers to learn with their mentors. After that year, they can earn an SKM Level 3 certification in motor vehicle inspection.

“What’s special is that we can place graduates immediately in Carsome, and they can draw a respectable salary. What’s more, if they work with us for two years, once the third year starts we will reimburse the tuition fees back to them. In effect, it is like a free education, where all you need is commitment,” said Jiun Ee.

Jiun Ee also explains that the Academy also helps the Carsome brand indirectly. “With Carsome Academy, we can build the gold standard in automotive practice. We are able to shout it out loud to the Southeast Asian market that our standard is the exact standard of service you get. By being the first mover in this field, it actually benefits the Carsome brand immensely,” he explained.

But more than anything, Carsome Academy has been Jiun Ee’s passion project. “My dream is actually to open a football academy, because I’m crazy about football,” laughed Jiun Ee. “Carsome Academy is the next best thing. Right now, we probably can have 100 students per year. I’m not satisfied with that. I want to do more – at least 500 students. Human development is the way forward, and I’m proud to be championing that.”