Deprecated: Function Elementor\Widgets_Manager::register_widget_type is deprecated since version 3.5.0! Use register instead. in /www/newsmalaysia_263/public/wp-includes/functions.php on line 5383
 Head to Head: Proton Saga Premium vs Perodua Bezza Advance 1.3 - Carsome Malaysia Skip to content 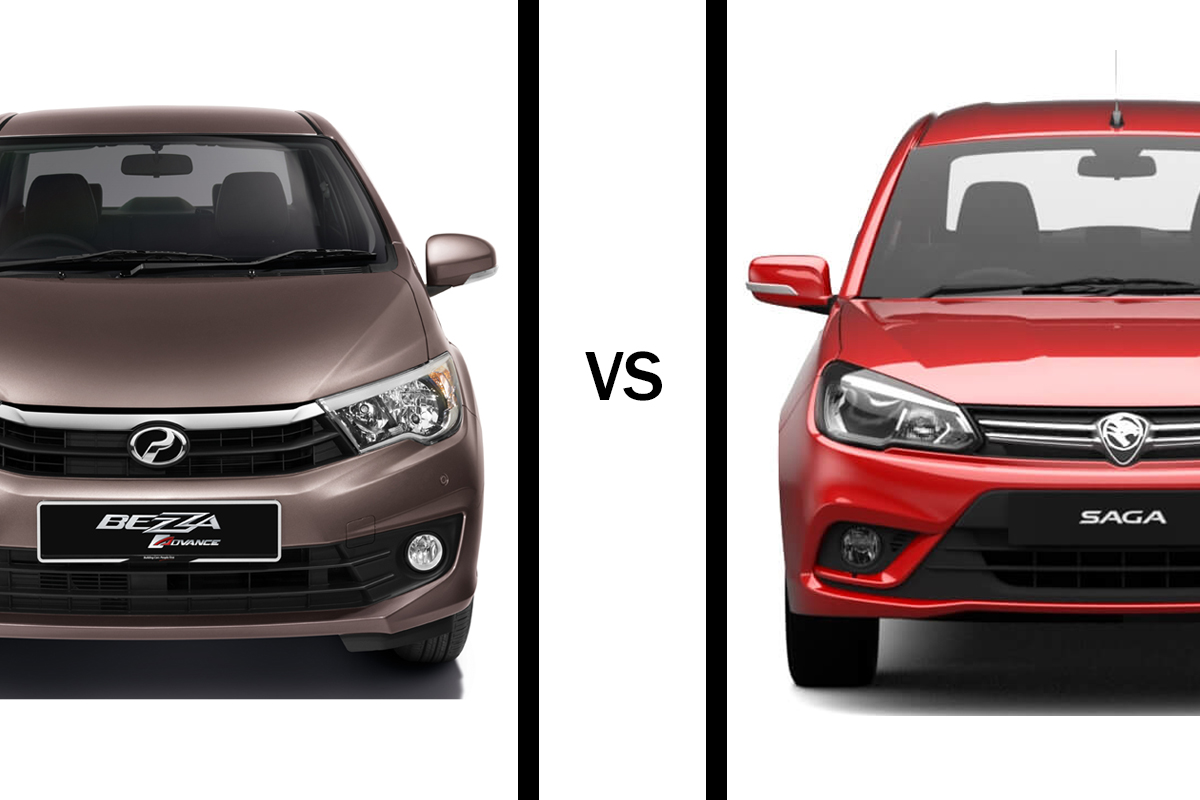 The much anticipated Proton Saga was finally released to the grand and warm reception of all whom were in attendance last week. But of course to many, this is seen as the competition of the Perodua Bezza that was launched a few months earlier. With both cars aiming to cater, impress and please pretty much the same audience, we wondered, how would a new car-buying consumer pick between the two?

So here we are again, without any controversial cross segment comparisons, putting it out there for you to decide; beginning with…

Is there a price difference? Yes, there is a price difference around RM 5,000. The Proton Saga Premium, which is the highest spec for the model is priced at RM 45,800 while the Bezza Advance just tips the scale over the RM 50,000 thousand mark at RM 50,800. Just on price alone, the winner is clear.

Here the size differences between the two can be seen in height and length which have been worked to proper dimensions.

Between the two, the Proton Saga is essentially 181 mm longer, 69 mm wider and 19 mm shorter than the Perodua Bezza. The wheelbase is also 10 mm longer than the Bezza. In theory, the centre of gravity is essentially better in this respect. In terms of comfort? We like them both and interior design is subjective to the individual. While it might not be a point for some, there is also an inch difference for both vehicle’s rim size, with 15-inch 185/55 on the Proton Saga Premium and 14-inches 175/65 on the Perodua Advance.

In terms of output, they’re identical. With a standard 1.3-litre engine, both are capable of an output of 94 horsepower. However, in terms of torque, the Bezza literally goes one up from the Saga by offering 1 extra Nm of torque more than the Saga’s 120 Nm. On numbers its the same. The similarities on paper though, ends there. Until we do a test drive comparison, we’ll be able to tell which feels more refined, quieter and better overall. We’re somehow convinced though that the new Saga will have a better handling and a quieter cabin. 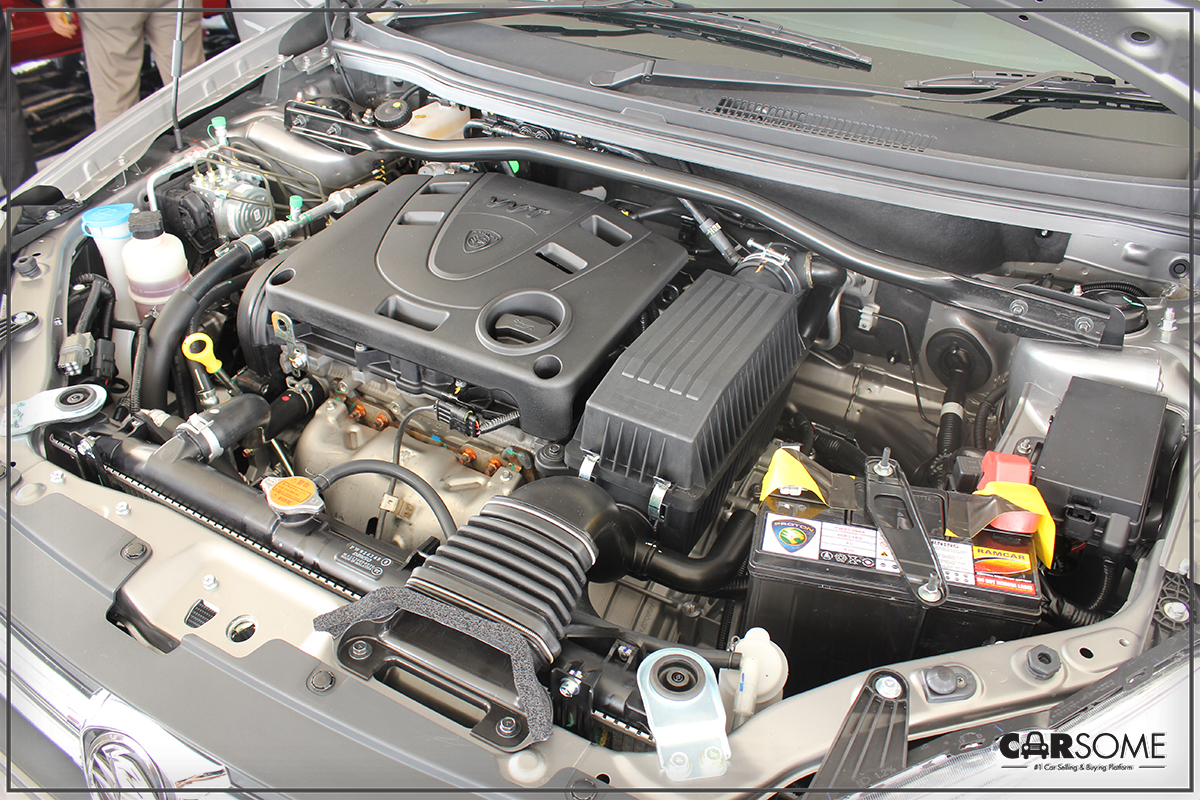 At 101 horsepower per tonne, it’s noticeably higher than the Saga’s 87 horsepower per tonne, which could be contributed by the 175 kg weight deficit it has over the Saga’s 1,075 kilogram kerb weight. As such, in specifications alone, the Bezza would prevail between the two in terms of performance as it has to deal with less weight with the same amount of output. 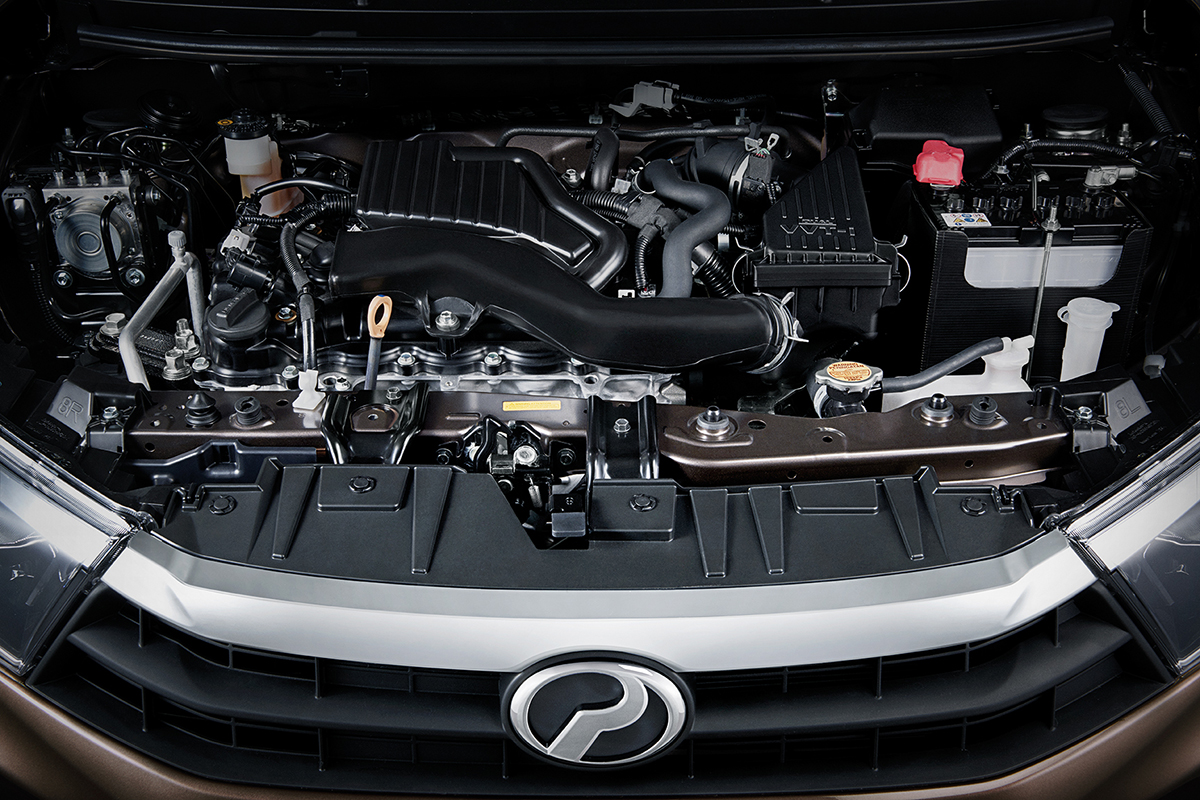 In terms of transmission choices, this is where many would be subjective on the differences a CVT vs a conventional automatic has. But which is better? Technologically wise, the benefits of a CVT transmission on the Saga trumps the traditional four-speed automatic on the Bezza.

The Bezza, as Perodua’s first EEV sedan is claimed to be capable of 22 km/litre which we assumed is a result of the Eco Idle System, essentially an Automatic Stop-Start system while the Saga, with Proton’s Eco Drive Assist is capable of 18.5 km/litre (converted from the claimed 5.4 litres/100km).

The necessity of keeping up with the times have definitely reflected on these two cars as they’re both packed with driving aids that would give cars of a more superior segment a decent run for its money. A great two thumbs up for Proton and Perodua.

Both come with Dual Front Air Bags, ABS with EBD, Electronic Stability Controls, Brake Assist, Traction Control, Hill-Start Assist and ISOFIX for the little ones in the back seat. As for the grown-ups up front, the Saga only offers seat belt reminders for the driver while the Bezza’s system is inclusive of the front passenger as well. 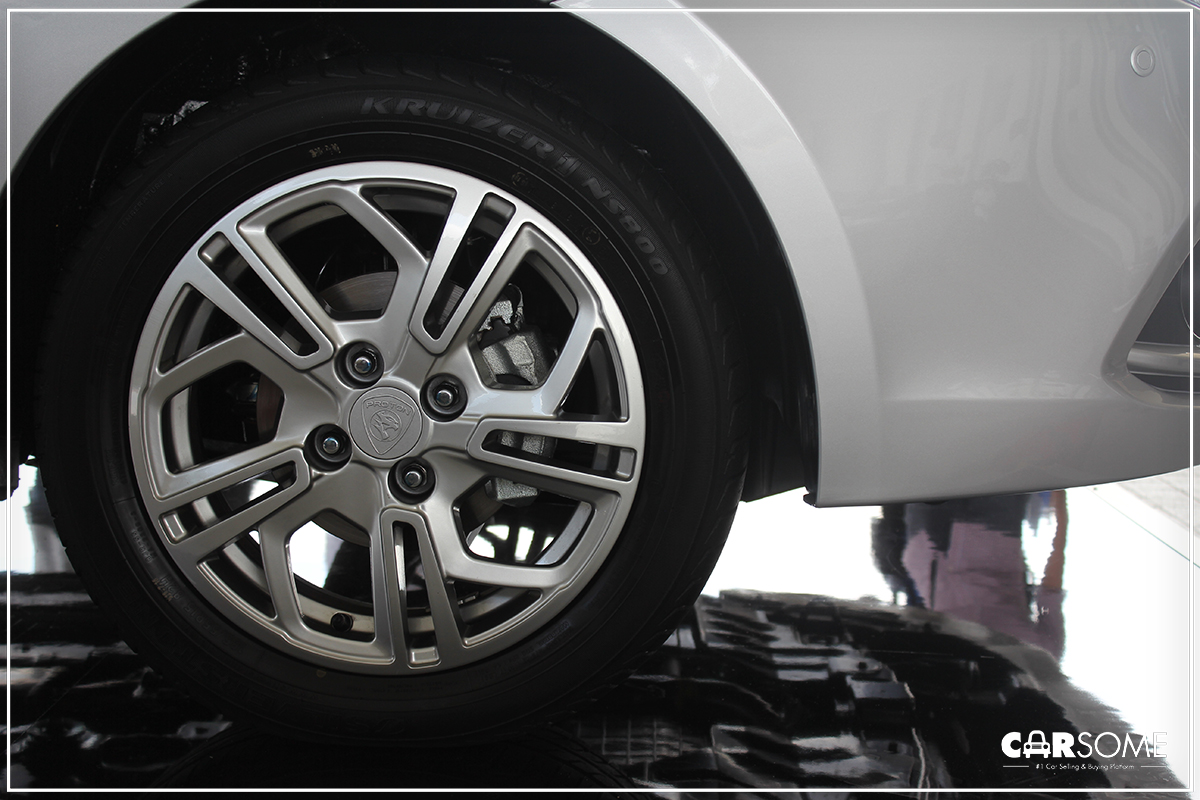 The Saga Premium is provided with 15-inch rims as opposed to the Bezza Advance’s 14-inch. 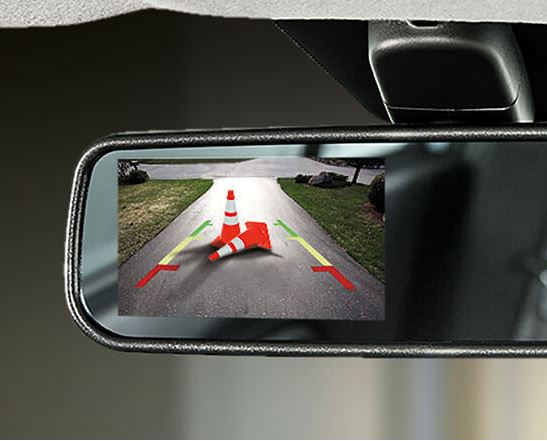 While the Bezza’s reverse camera is projected on the headunit, the Saga’s offers a different twist to the process by appearing in the rear-view mirror. How cool is that? Credit: proton-edar.com.my

What we liked, that indicates Proton and Perodua are both moving with the times, is that not only are they equipped with rear sensors, they’re also fitted with the same at the front. The rigidity of both the Saga and Bezza’s shell have also been enhanced although in safety ratings, the Bezza has earned a 5-star ASEAN NCAP Safety Rating, 1 more than the 4 afforded to the Saga.

What is also good to note is that Proton’s initiative to increase the rigidity of the latest Saga compared to the model it replaces is very welcomed. This certainly increases occupancy safety when it comes to more severe accidents. We certainly notice the differences in weight, which will evidently translate into safety as well. 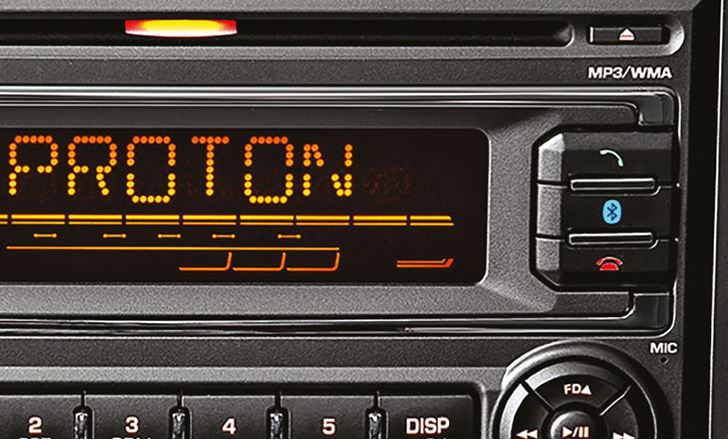 Both the headunits in the Bezza and the Saga is linked to 4-speakers, offers Bluetooth connectivity, USB and AUX inputs. As a plus, Bluetooth is even present in the base model Saga, something that Proton could’ve remove but kept standard. 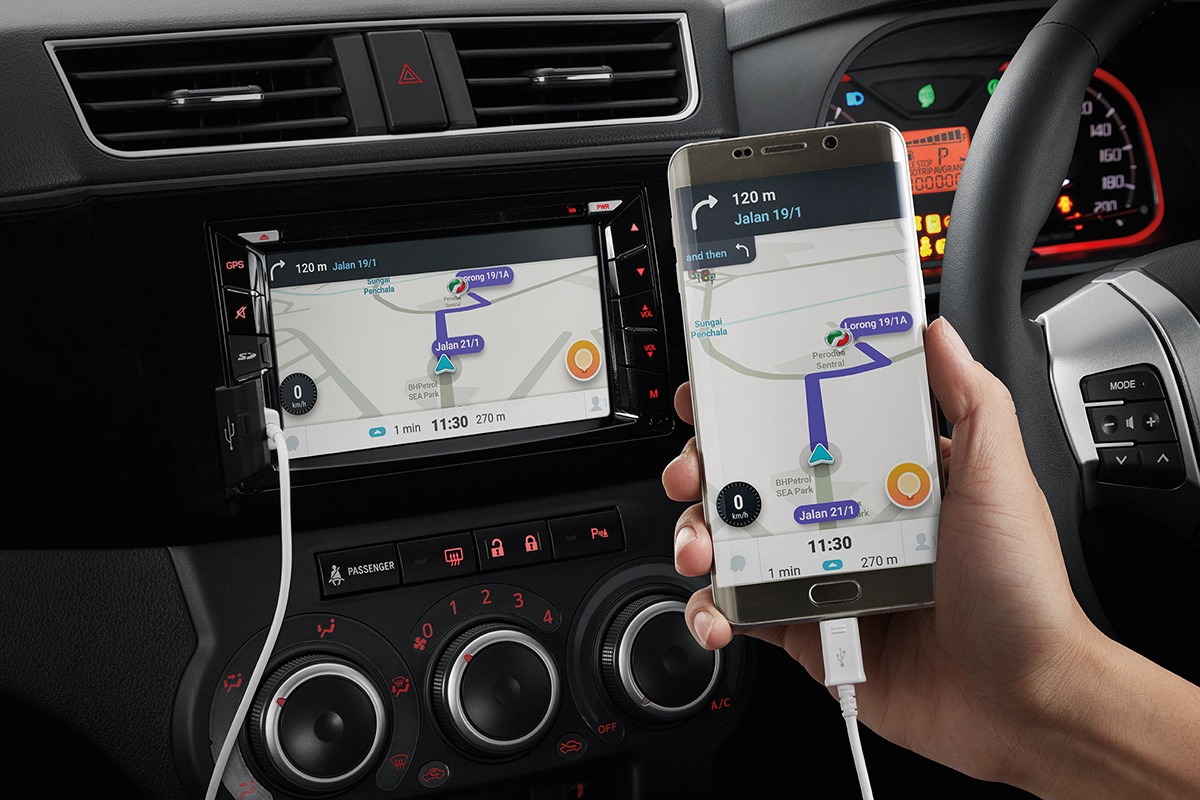 Both the headunits in the Saga Premium and Bezza Advance are also equipped with reverse cameras but the Bezza’s advances from the Saga with the Smart Link and navigation system. The Smart Entry and Push Start System isn’t available in the Saga which is fair due to the difference in prices.

The price difference also includes leather seats. And while Malaysia would be too humid for these type of seats, we’re more happy with the fact that both vehicles are just as spacious. 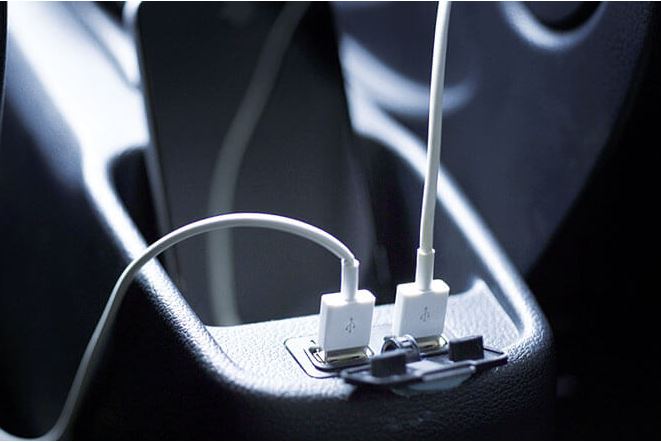 Both steering wheels comes with audio controls. Here the Saga stands out with 6-bottle and cupholders combo compared to the Bezza’s four. The Saga also takes it a step further with 3 USB ports, while the Bezza only sports two units. Here the two USB ports catered to the rear passengers is a plus. We as millennials, like where all this is heading.

What do you think? Share your thoughts in the comments and tell us which do you prefer?

Now that you’ve read this, check out our cross segment comparison to see the differences between the Persona and the Bezza!

Petty crimes are on the rise. Learn to stay safe on the road while you’re on your own here!

Whether it’s for the Saga or the Bezza or any other new car for that matter, fill in the request form below to get the best offers.