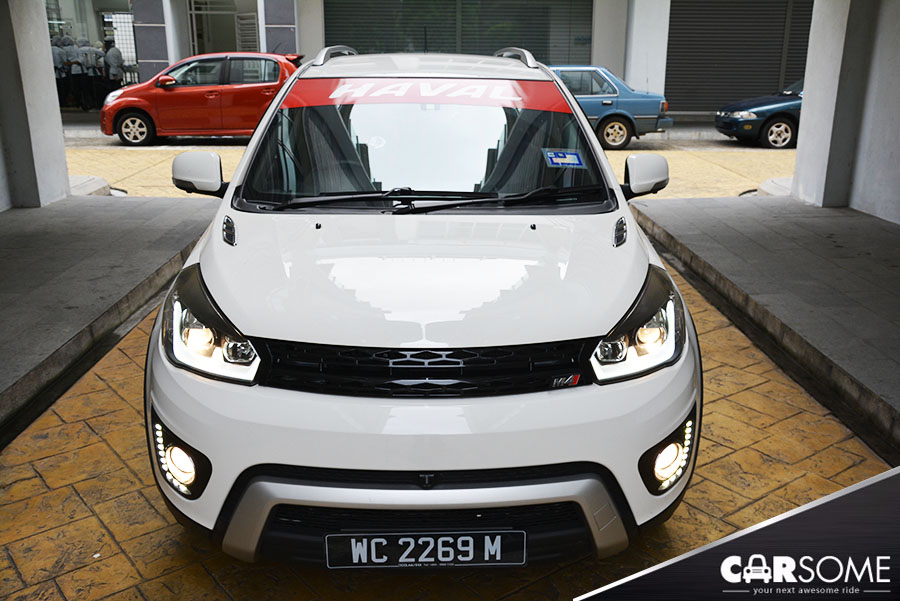 You’d never be blamed by approaching any item that bears a Made in China tag with a pinch of skepticism, unless of course, you’re talking about tee-shirts or toothbrushes. Up until a few years ago, most of us with our iPhone’s and Samsung’s would’ve never expected the Oppo’s and Xiaomi’s to be as impressive as they are.

And likewise with their cars. While vehicle’s bearing Chinese stamps aren’t new in the Malaysian automotive scene, they’ve not seemed to have been as well received as their smartphones. But seeing as how their production standards have improved from fake iPhones to iPhone competitors, we’ve been curious as to how their vehicle-manufacturing sector has fared.

The Haval M4 was a car we’ve been looking to get our hands on, and spend a weekend with for the longest time. When the time came, we were fortunate to get our hands on the range-topping M4 Elite that comes with a host of accessories. Here’s what we thought about the M4 given the brief period it spent under our watch. 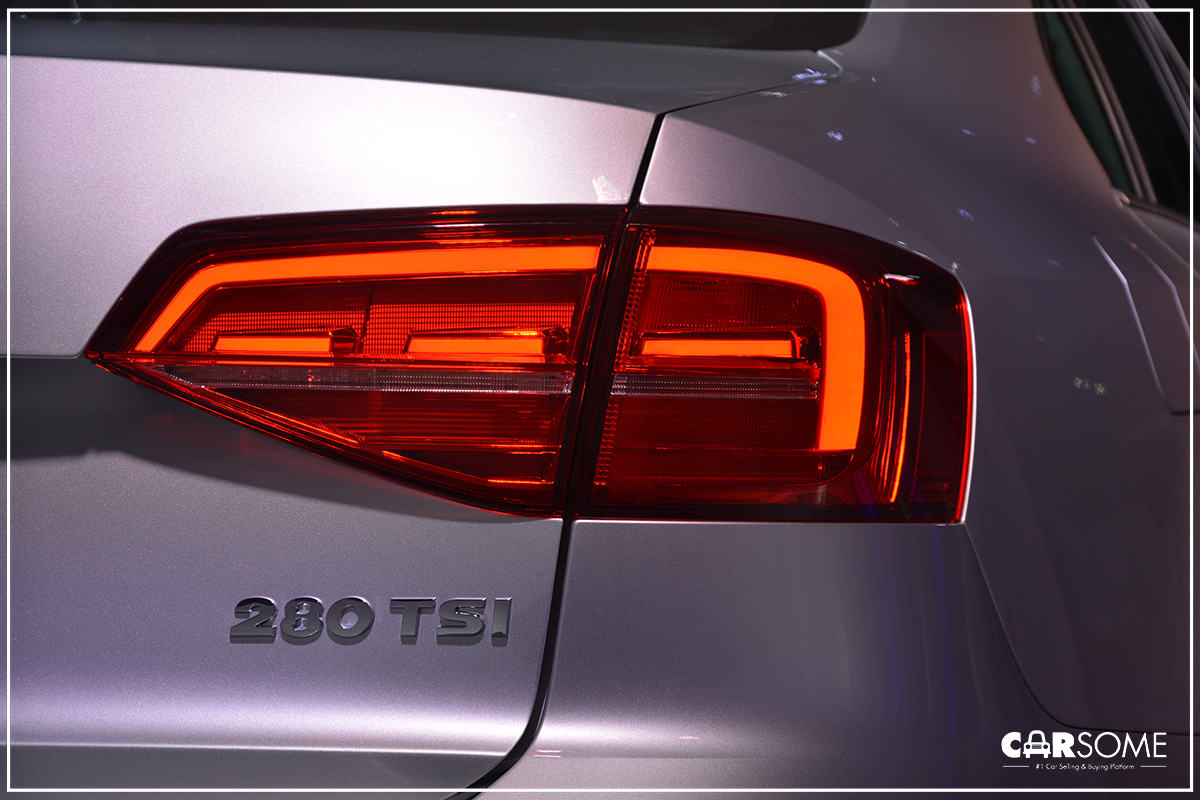 The M4’s 1.5-litre VVT four-cylinder engine output figures are at 103 hp with around 138 Nm of torque on the taps. Performance was delivered rather smoothly without leaving you wanting, bearing in mind that it’s only just a 1.5-litre engine after all. That being said, unfortunately, performance was not uncompromised. You see power is delivered with the synergy of both a potent engine and an efficient transmission. But unfortunately the M4 Elite fell short with the latter. 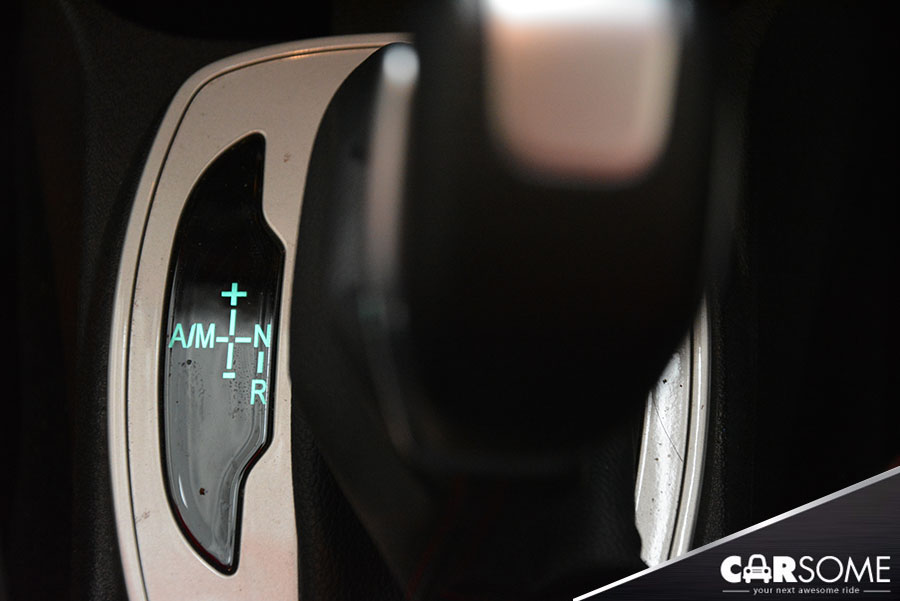 In an age where manufacturers strive within every inch of their expertise to engineer smoother, more efficient gearboxes, evidently with the CVT’s and DSG’s of today, the AMT unit in the M4 seemed to have stood somewhere between an old manual gearbox and a conventional automatic transmission. We felt it still needs a bit of work as it felt a little too slow to react.

Whether its overtaking or coming out of a junction with the M4, the components in the transmission felt like it was having a meeting to deliberate on whether to upshift or to downshift. Subsequently then executed by a learner driver who was still learning the ropes of a manual gearbox and the clutch – a vein-popper for those who are in a hurry.

That being said, it’s not an unbearable shortcoming. The M4 just needs a little getting used to. It requires finesse and encourages smoothness with the throttle, but once you get a hang of it, and with a little more feedback behind the car’s “tiptronic” mode, gear shifts become less erratic. 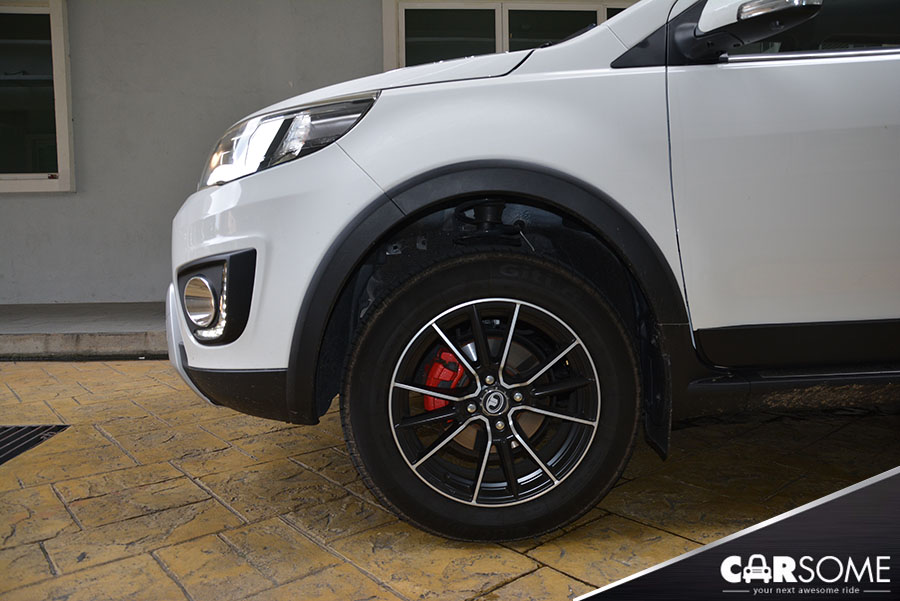 The brakes were pretty good to say the least; they were progressive and easy to modulate but yet offered sufficient bite and braking performance should you decide not to run the red light.

When maneuvering through less than favourable road surfaces, the M4 Elite ironed out all the bumps and humps well as you’d expect from a car with a RM 70-odd thousand price tag. In fact, we’ve reviewed a couple cars recently that were three times its price, but were less refined as the M4 Elite when it came to ride comfort. 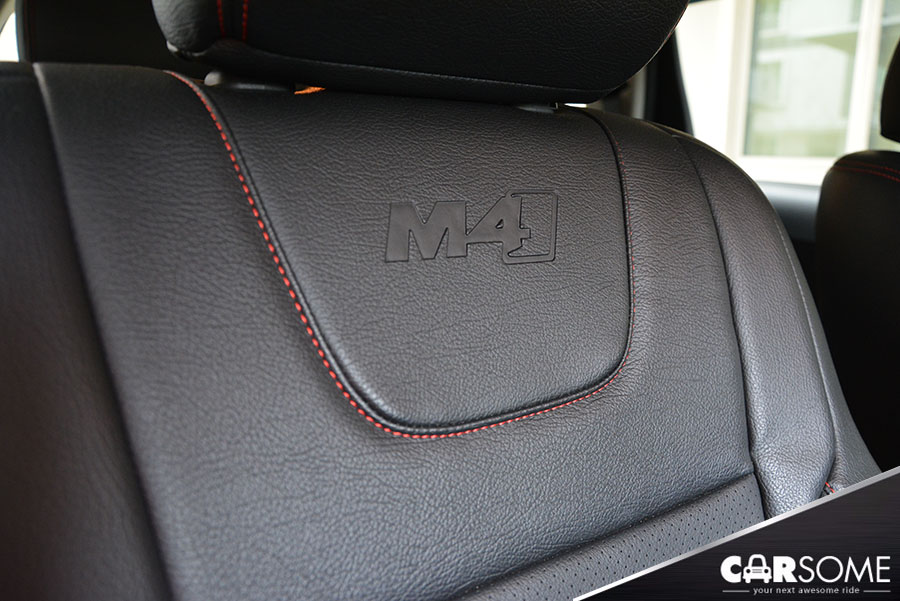 The interior was a real surprise package. It felt roomy due to its high roof line and had adequate insulation for minimal road and tire noise. However, leg room wise, we felt the M4 Elite could’ve done better. Theoretically a five-seater, but in reality the M4 Elite would’ve probably fared better with only 4 passengers. 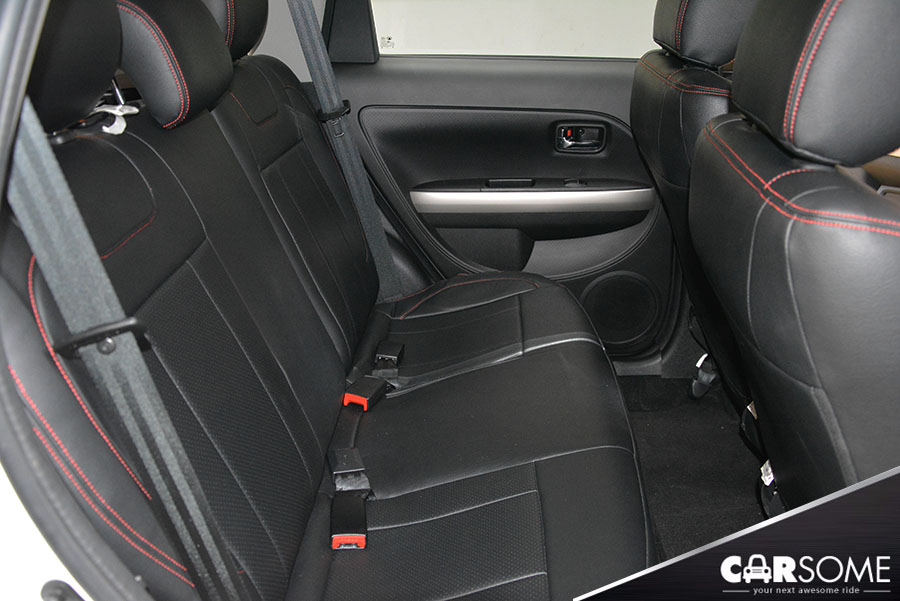 What we’d also like to point out is the fact that the rear seats felt a little too upright, with no adjustments available to lean further back. It may be comfortable enough for a short drive, but we’re not sure if the same could be said for an 18-hour long “balik kampung” trip. 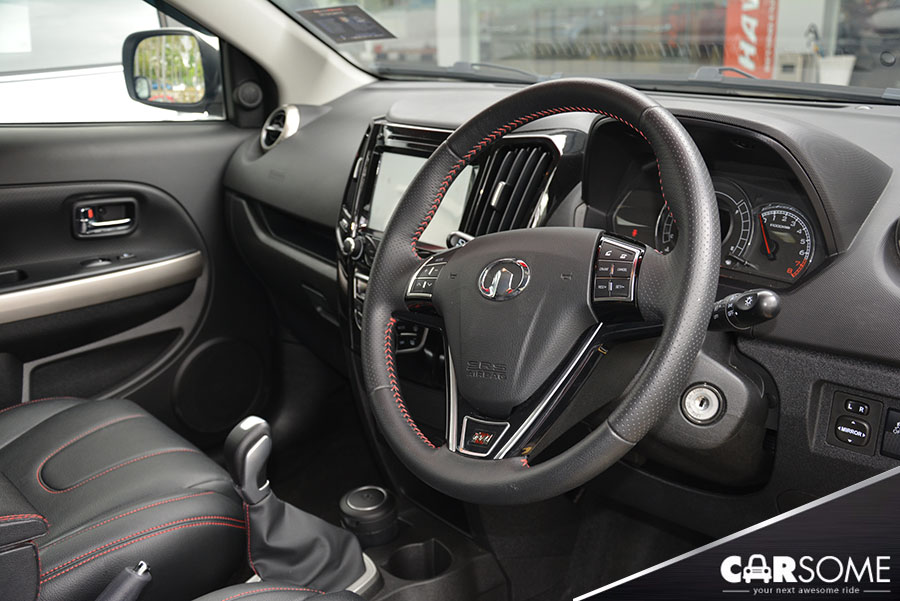 The interior could have been completed with common car features such as backseat pockets, door panel storage spaces and cupholders for a car such as this, but seemed to be omitted by the manufacturer. Present with the Elite variant model, were leather seats and a leather-wrapped arm rest, which was probably the softest, most comfortable arm rest out there, but was lacking structure, akin to leaning your arm on an intoxicated person. 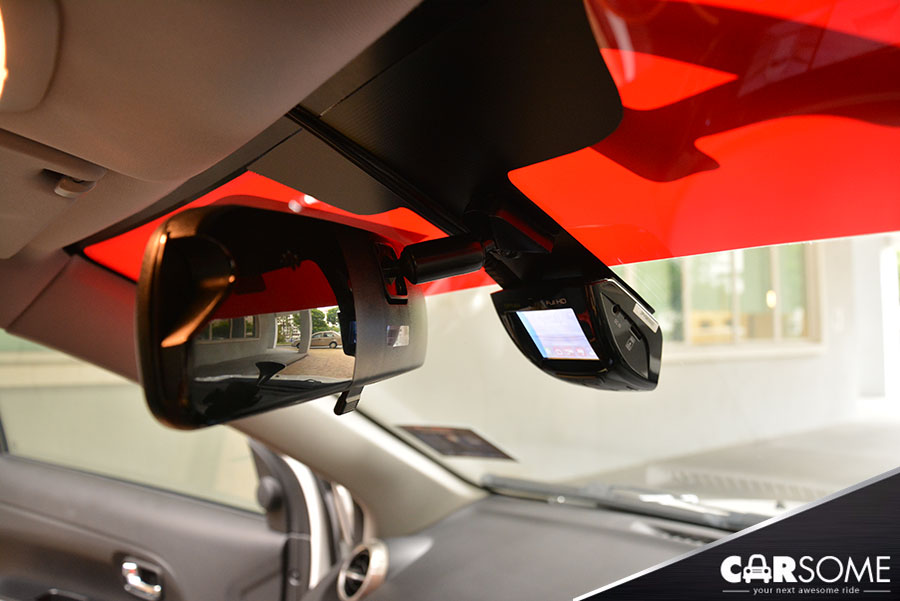 As for the driver, while the high seated position provided a clear view ahead, it could be a setback for taller individuals as there weren’t any height adjustment features. The Smart Tag which was cleverly integrated into the rear-view mirror and the Digital Video Recorder (DVR) as Haval calls it, were additional features in the M4 only found in this Elite variant.

Another feature only available in this variant was the Around View Mirror which were made up of four cameras – one placed in each corner of the car, to project a 360-degree view of the car from the top and also intelligently projects either the left or the right side of the car onto the touch screen display according to your indicators.

While some may argue that certain quarters of the M4’s exterior could’ve been done with more curves and bulges, there’s no denying that this car projects a stronger presence than others within its price range. 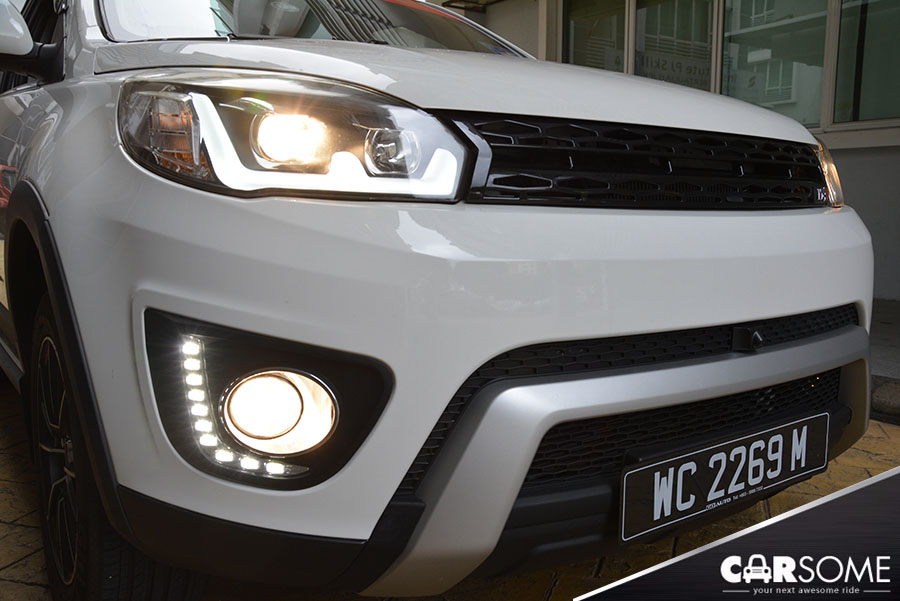 And there’s certainly no overlooking the M4’s front end; with the Elite variant that we reviewed, came with a Honeycomb front grill that stood out along with the Poly-Eclipse Projector headlamps and the Daytime Running Lights that provided a blend of luminous that more than adequately lit the path ahead. 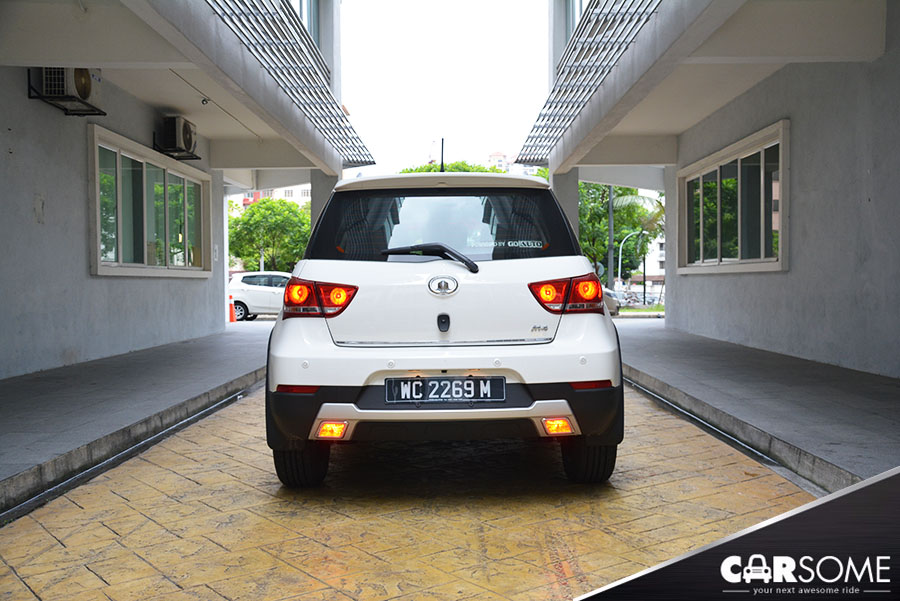 The same can’t be said about the rear though as its lackluster design just somehow made the front end look disproportionate with the back. Although, the refinement from the inside was clearly extended to the exterior with the way the door closes, the sound that it makes; is comparable to a car more than twice its value. Oh, and there were rear fog lamps too! 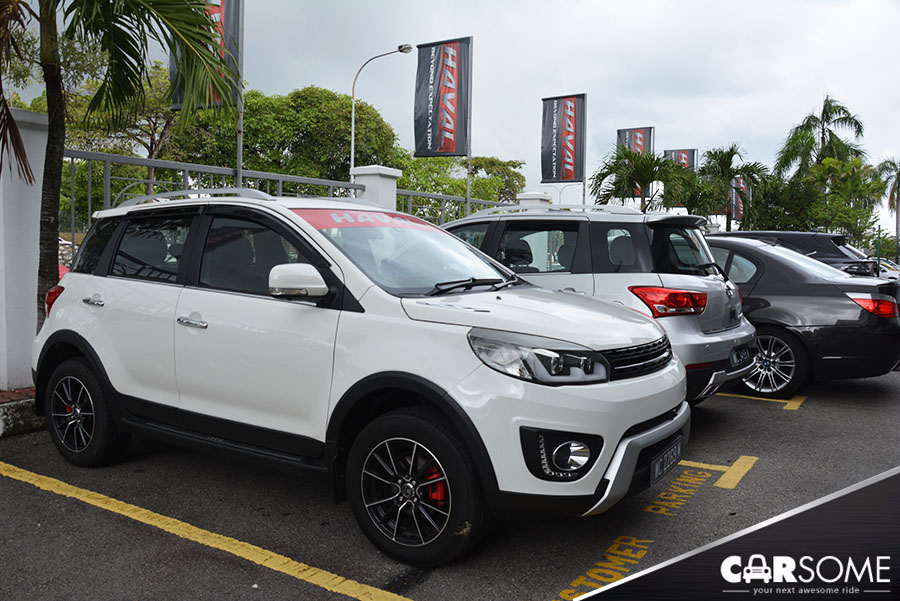 Despite shortcomings and setbacks, it’s still fair to say that Haval is headed in the right direction with the M4 and they’ve surely made our anticipation for the recently launched H2 even stronger.

What we felt though, was that more attention could have been paid to the basic aspects of the car, like having a less erratic transmission or allocating a bigger boot, than with add-ons like the DVR, the AVR, built-in SmartTag and hood vents that most car owners in this price bracket would’ve happily done without. 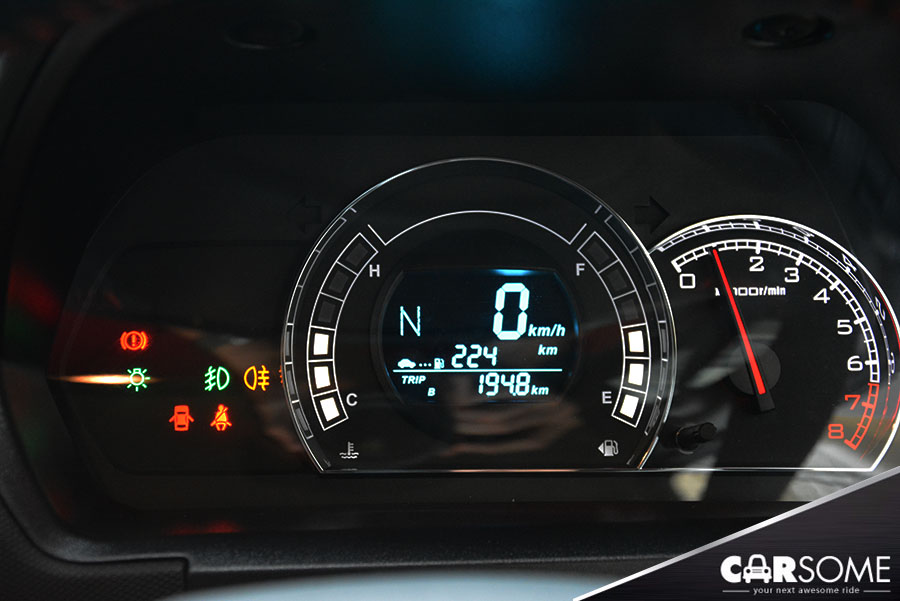 This is because overall, the M4 Elite was a rather pleasant little package considering the price it is sold at; it turned heads, everything was adequate and worked well but it only takes one less than efficient component to disorient the attractiveness of the whole ensemble.

We’re thoroughly looking forward to the impact Haval would have on our local automotive industry; if this is what they’re making now, imagine what they could produce in the next 5-10 years.

Find out what makes Alex Yoong tick both on and off the track!

For the best offers on the Haval M4 Elite, fill in the request form below!