First Impressions: On Board The All-New Kia Carnival 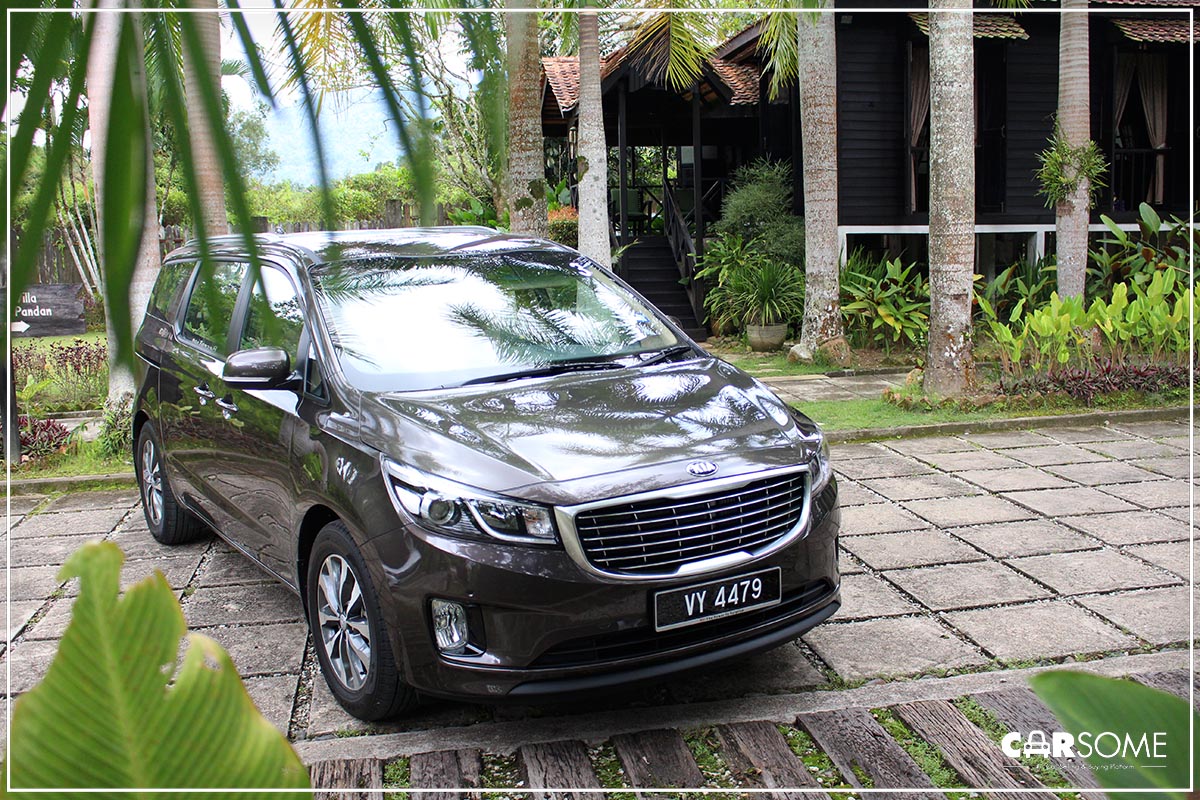 Naza Kia Malaysia today held a media drive following the recent launch of the new Kia Grand Carnival and we were one of the few to sample the new 7-seater mothership of an MPV. Bookings by the way, have been exceeding expectations. Flagged off by Nazman Yusoff, Head of Naza Kia Malaysia, the drive saw us journey through a series of highways, small towns and twisty “kampung roads” en route to a resort in Janda Baik. 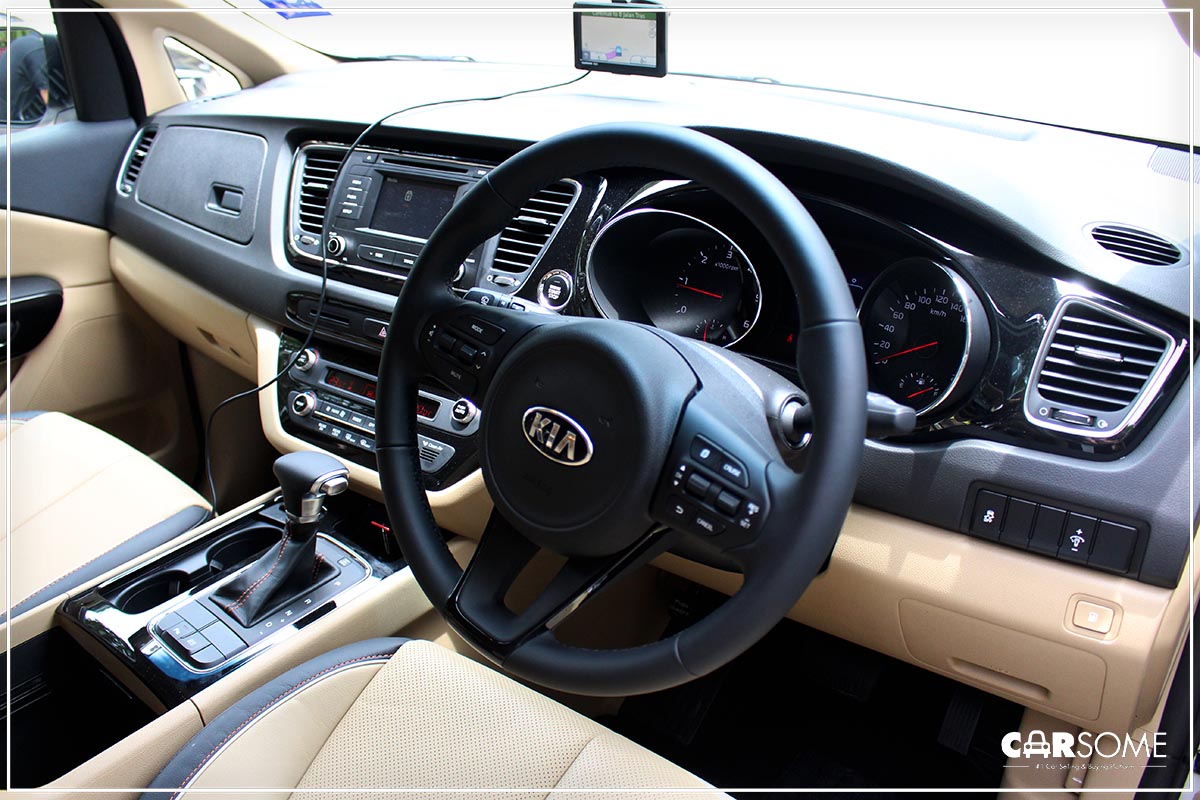 And almost instantly upon getting behind the wheel, you’d notice the abundance of performance lurking beneath the hood; home to the potent 2.2-liter turbo diesel engine with 193 horsepower and 440Nm of torque on the taps from as low as 1,750 rpm. 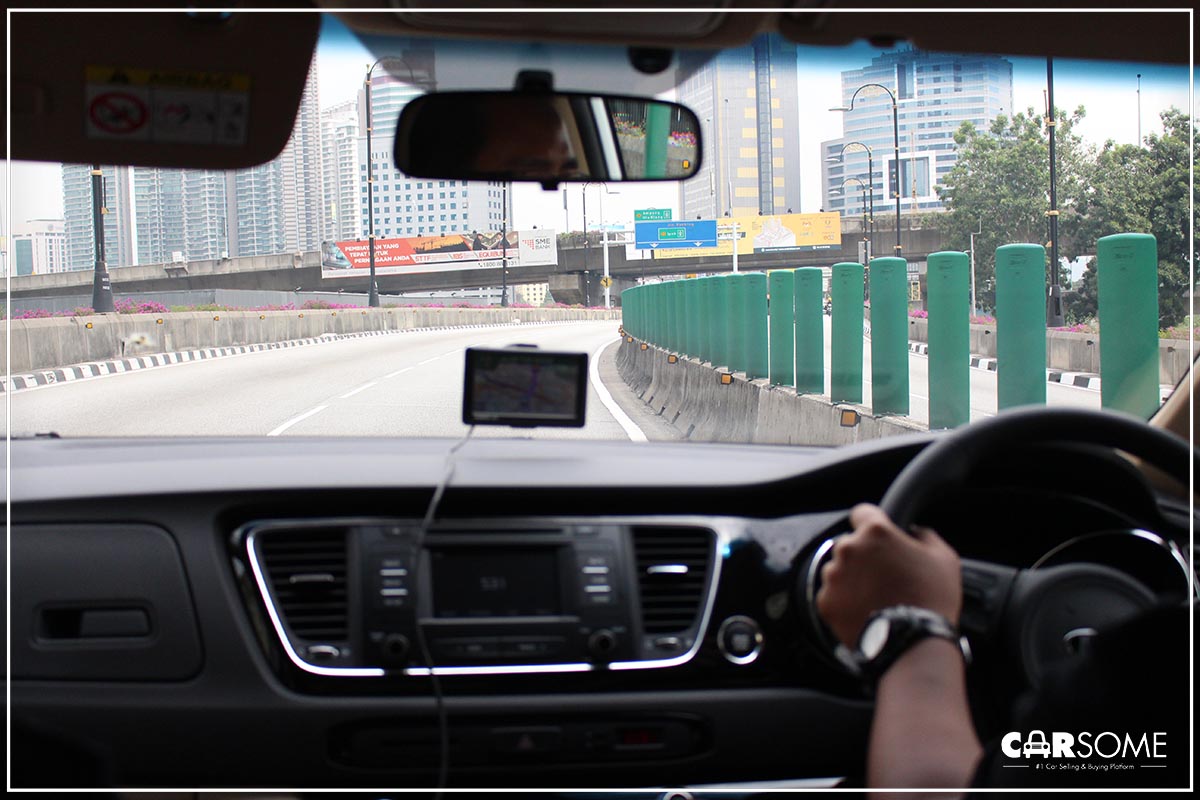 And the eagerness was apparent from the journey out of the city centre leading up to Gombak. The wealth of torque simply allowed the sizeable MPV to breeze out of junctions and away from standstill traffic with as little as a nudge on the throttle. 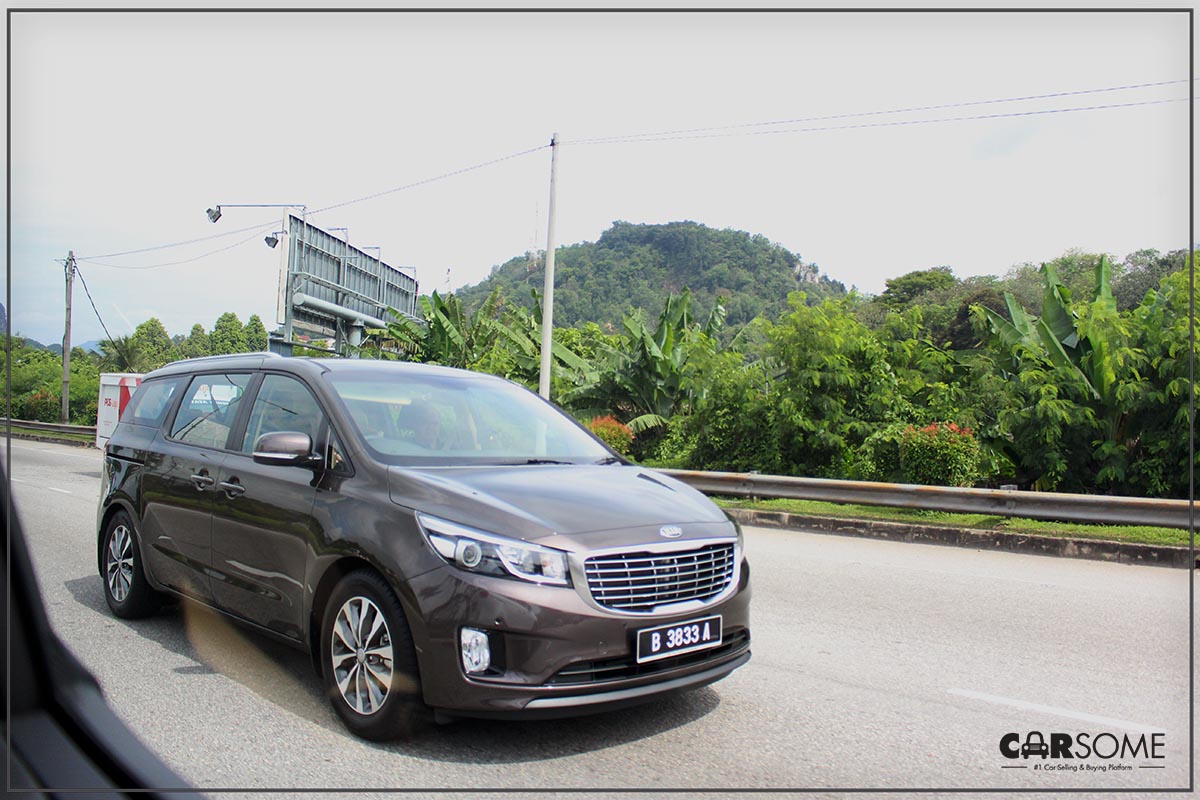 Even on the open roads, using the overtaking lane to overcome traffic ahead didn’t prove much of a challenge for such a hefty machine. The Kia wasn’t fazed either when we ventured out beyond recommended speed limits, momentarily. 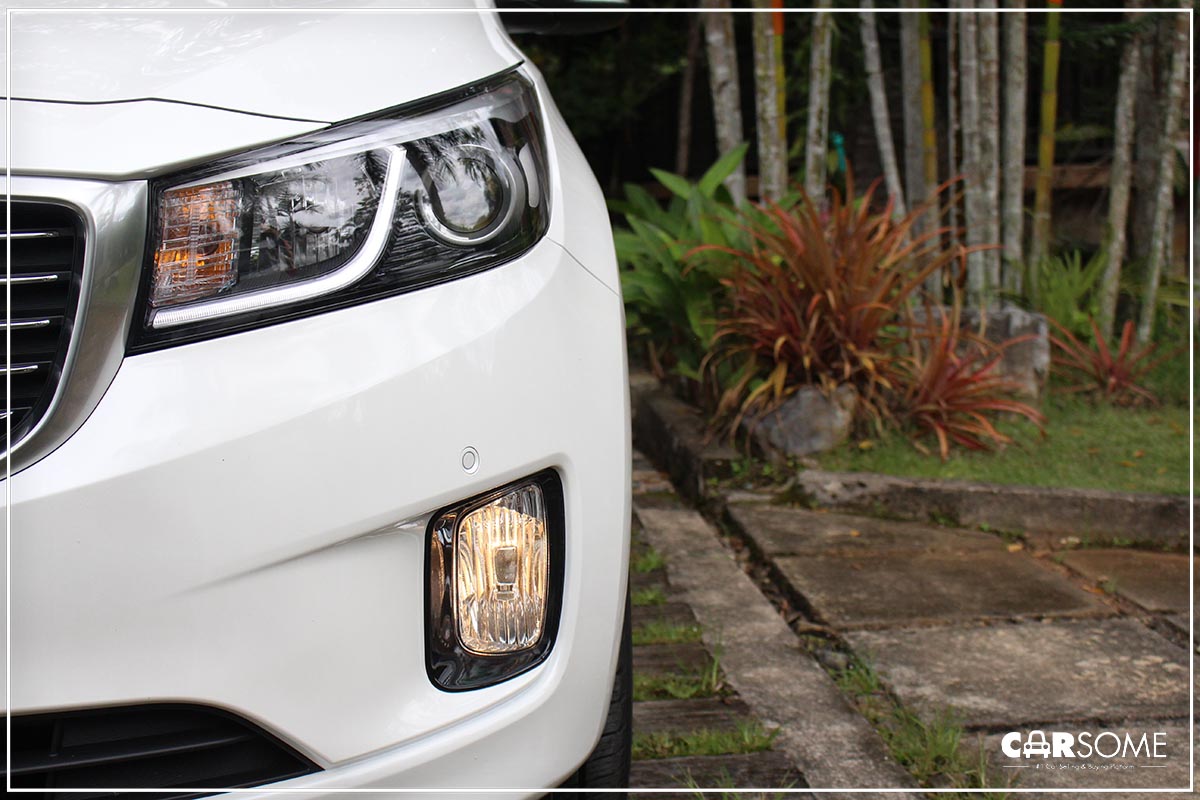 That said, we can’t say where the limits are for the mighty diesel engine – you’re not supposed to be driving an MPV that fast anyways, or with any vehicle for that matter. With weight on its side, stability was apparent at cruising speeds. 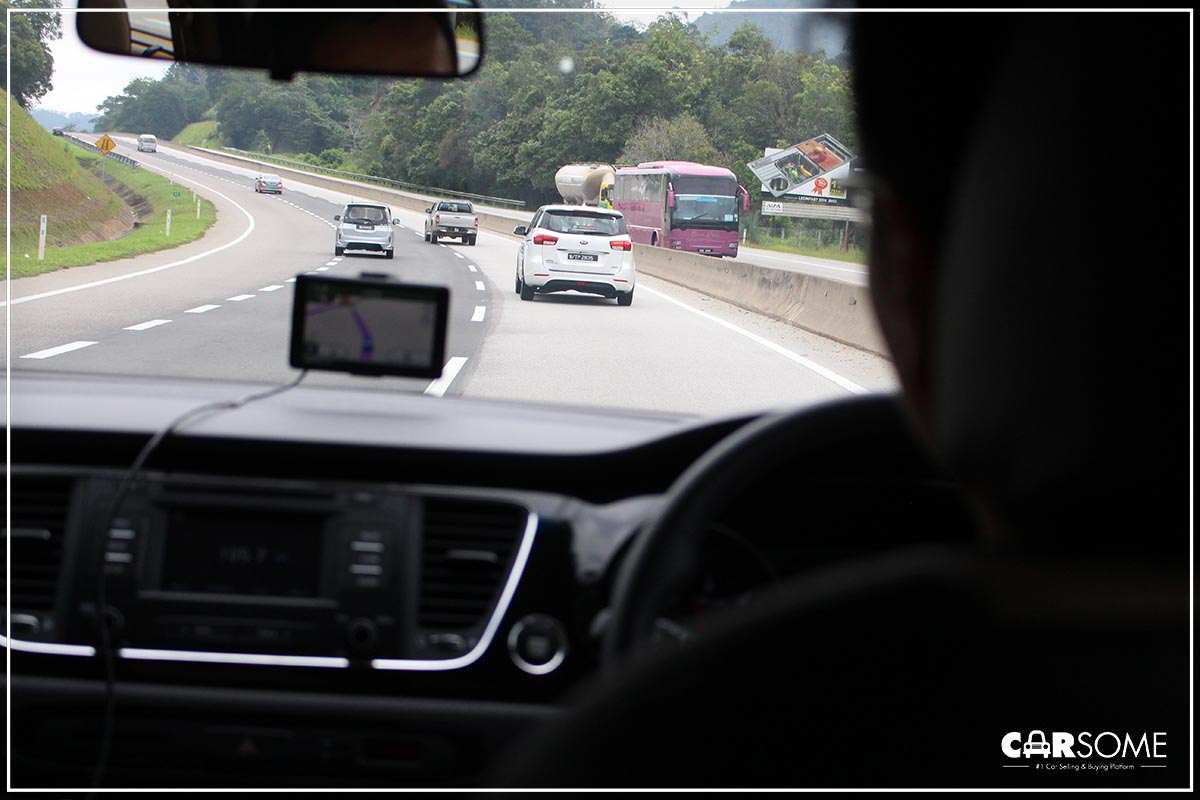 While we wouldn’t claim the Grand Carnival to be a Fiesta ST of MPV’s, it holds its own composure, throughout the long sweeping bends of the Karak Highway. The brakes held up well, but as always with a vehicle this size, it’s wise to anticipate braking earlier. 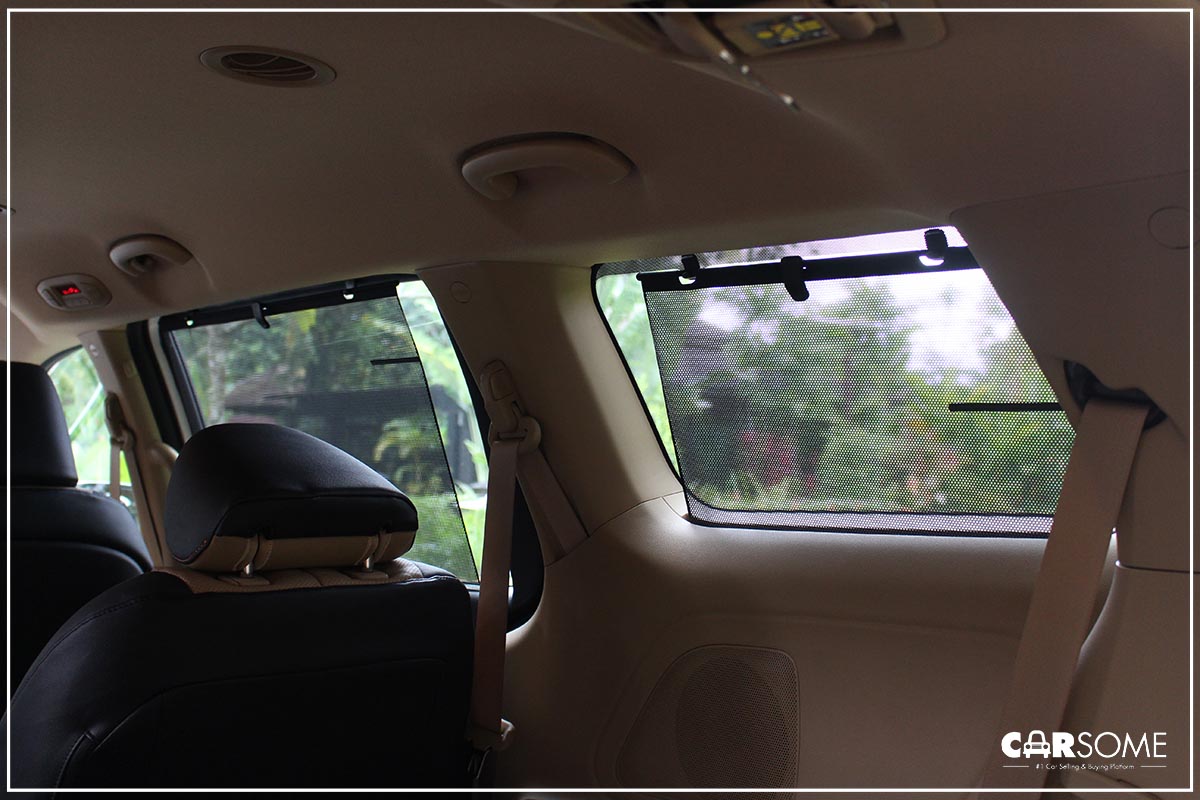 Possibly the strong suit of the Grand Carnival, NVH levels were noticeably low even at higher speeds and for the same reason, allowed all 6-speakers to prove their worth without interference. 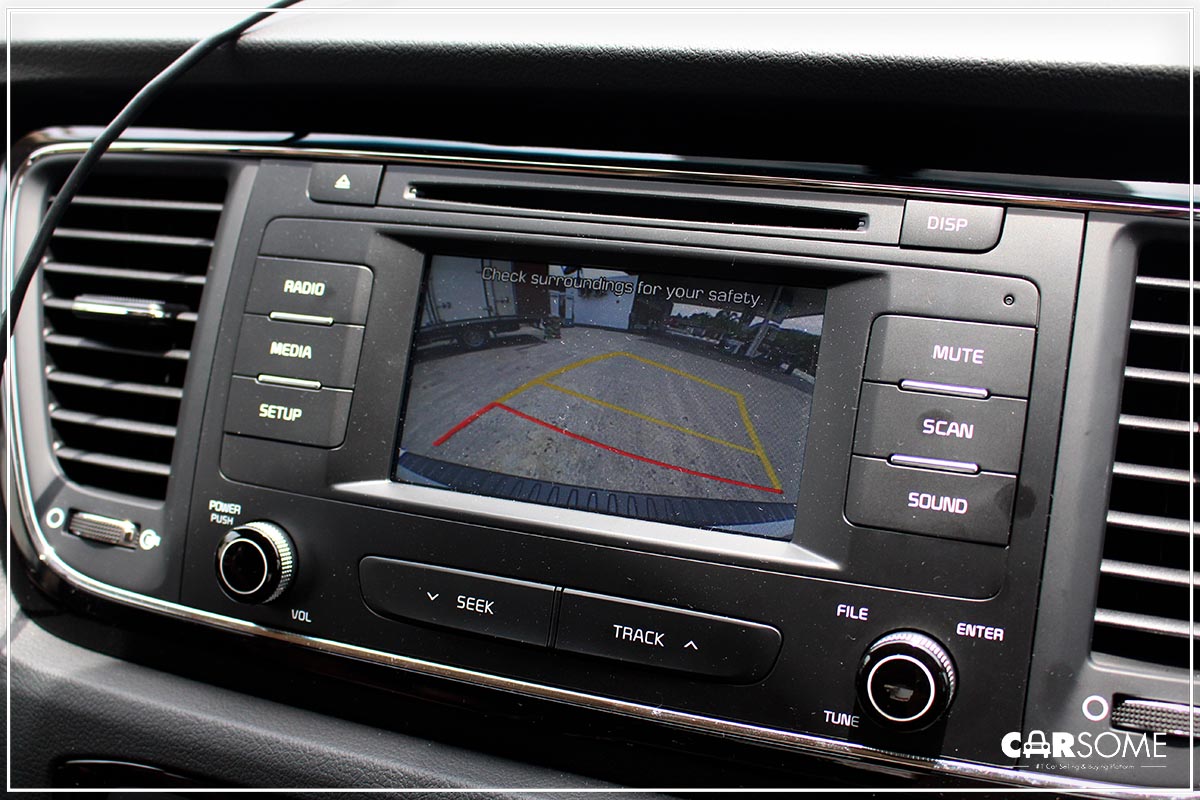 We should point that the Reverse Camera display wasn’t really proportionate to the size of the centre console but it’s clarity more than made up for it. Acknowledging this, we were enlightened by Kia over the fact that it was simply just standard CBU equipment; although an improvement to it is not ruled out. 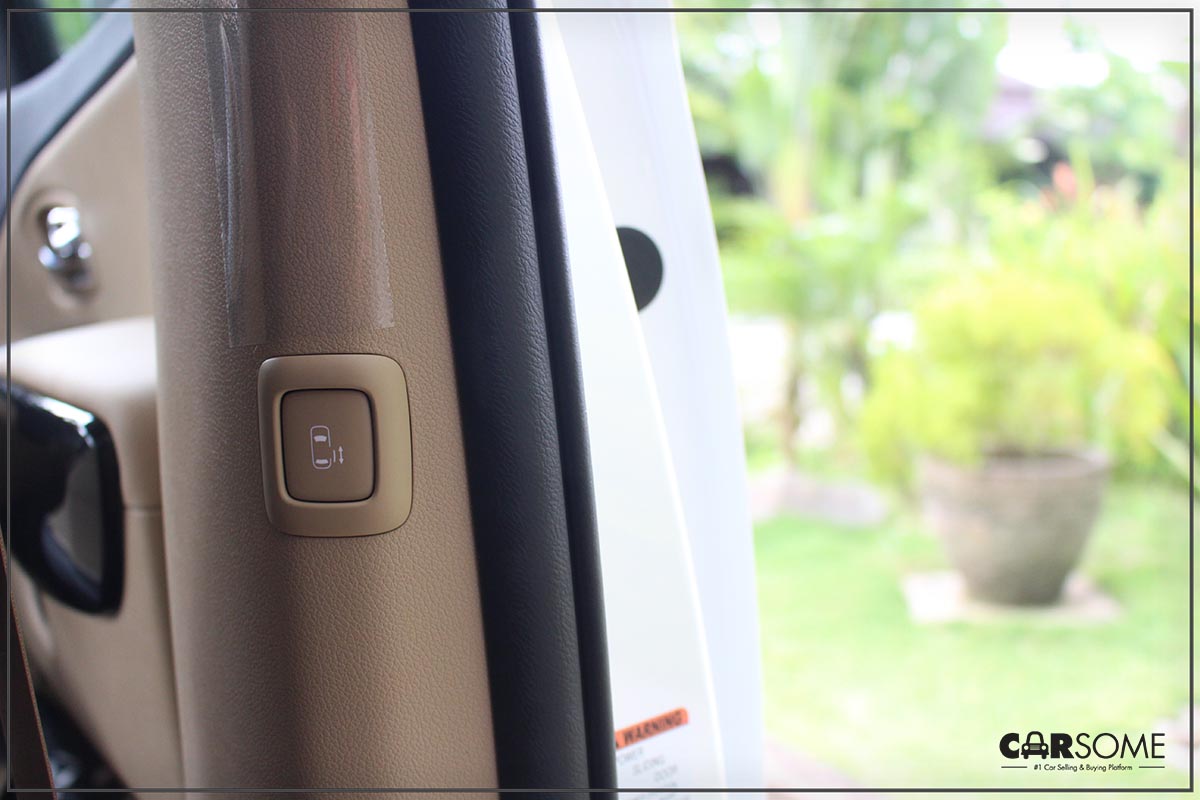 Automatic sliding doors are available on both sides of the Carnival, which could be closed by way of pulling the door handles (as usual) or simply pushing a button, placed on either side of the B-pillars. 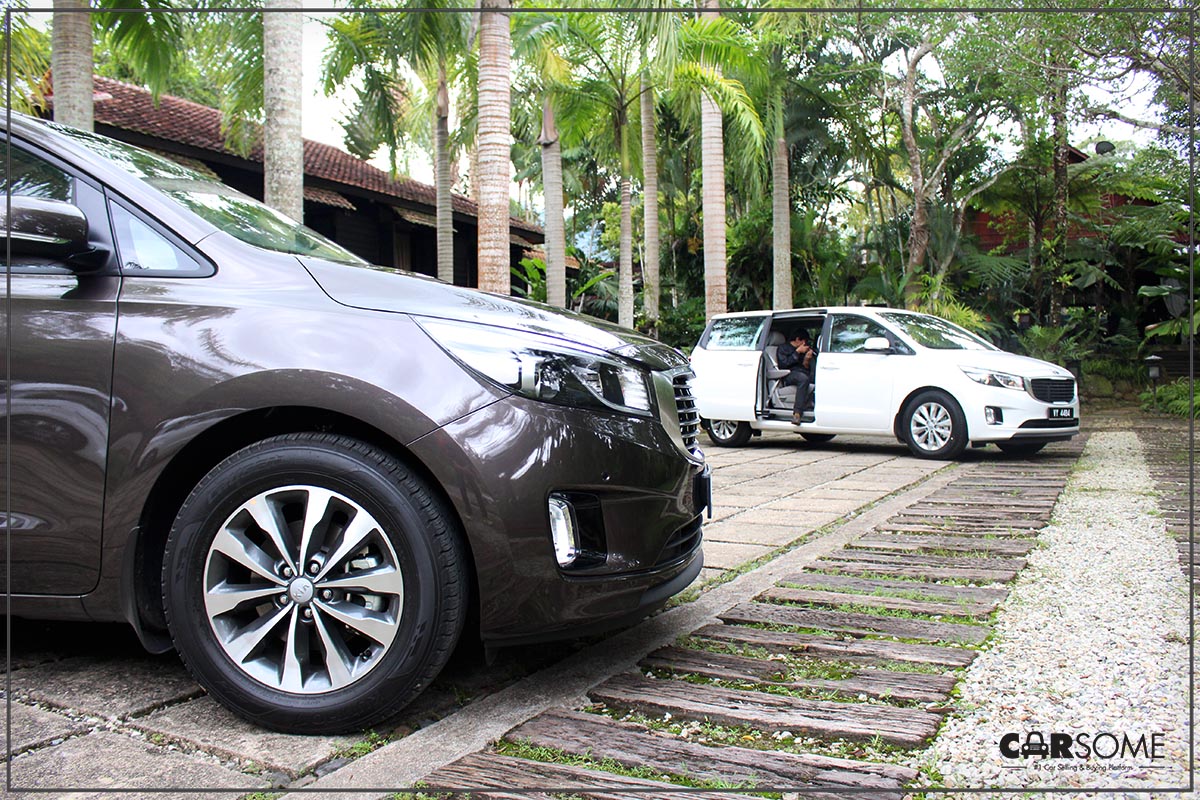 The driver too can enjoy such a luxury, with an array of buttons and switches positioned overhead to automatically open the doors and boot; which can be closed automatically from the back as well. 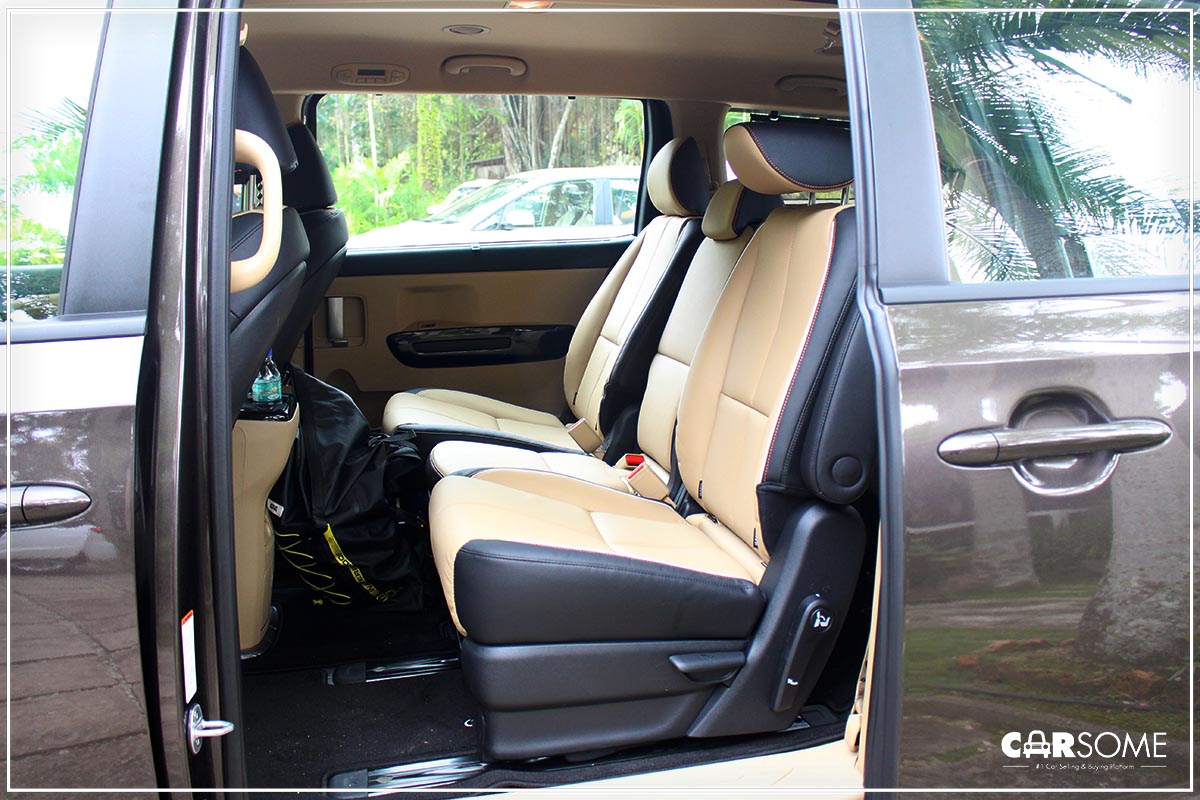 Space was aplenty no matter where you were in the Carnival. Even with second row passengers sitting in a reclined position, there was plenty more room for a lanky 5’11 passenger to forget he or she is seated at the third row. 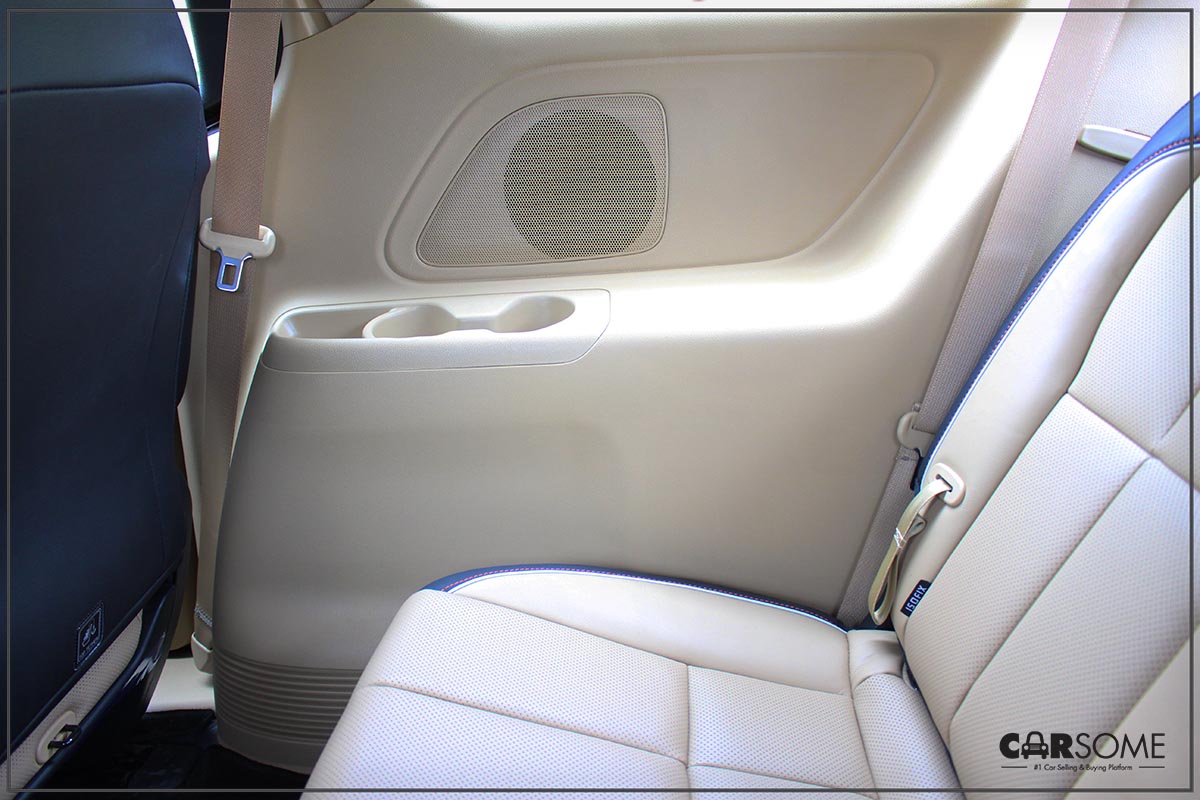 The lack of third-row air-con controls found in the Carnival was compensated with a foot vent; which seemingly makes it impossible for you to run out of chills anywhere in the Kia. The luxury of air-con controls though is afforded to second row passengers. 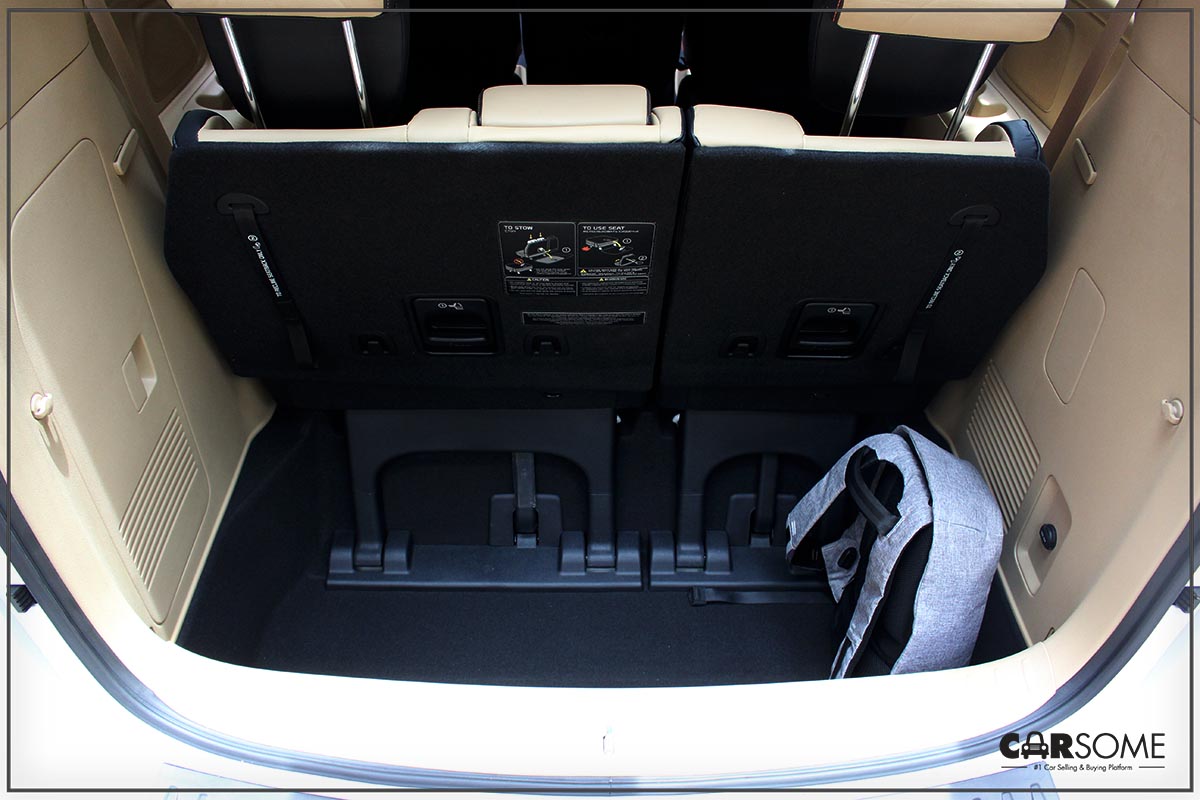 What you’d also not run out of, is the seemingly boundless space the cargo area can accommodate. Freeing up space where the spare tyre would normally be in other cars, made it obvious that more storage was available. 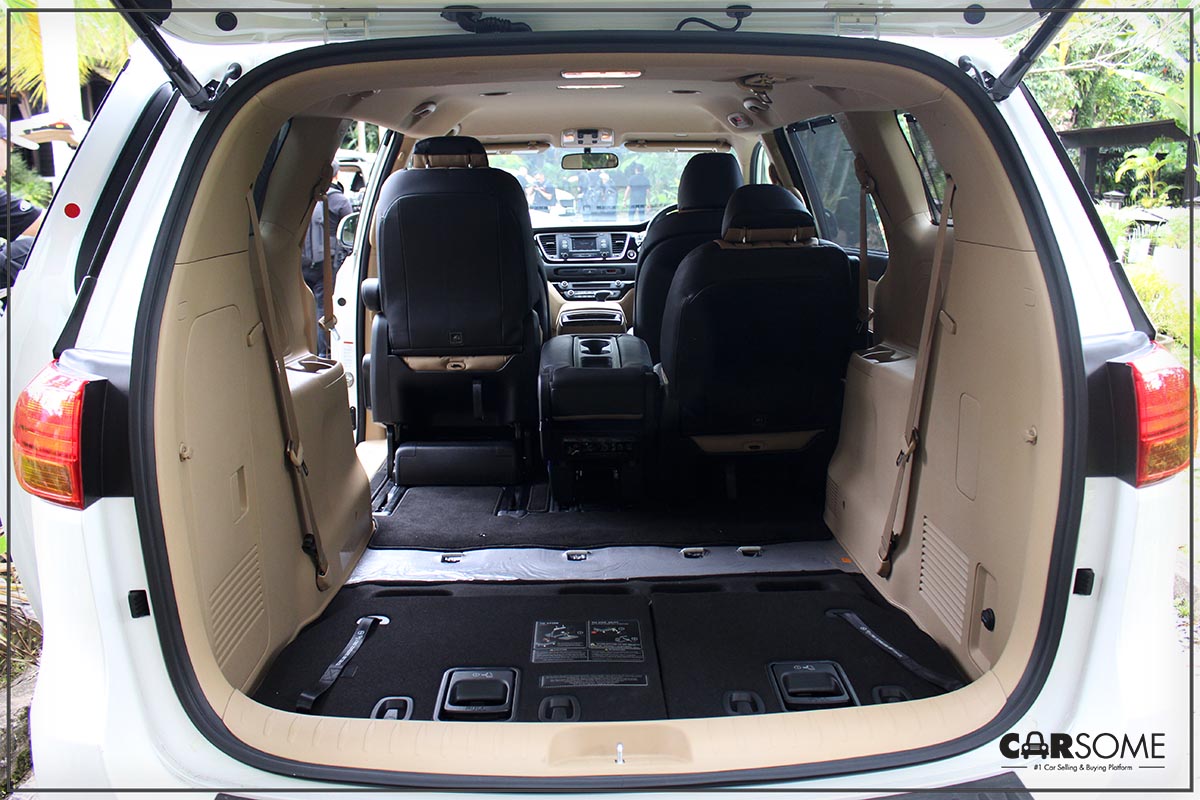 The seats in the Grand Carnival were flexible too; with lever and pull straps, which can be folded, stacked and “dunked” into the floor to create a wide-open space which we suspect can rival commercial vans – it’s all pretty clever stuff. 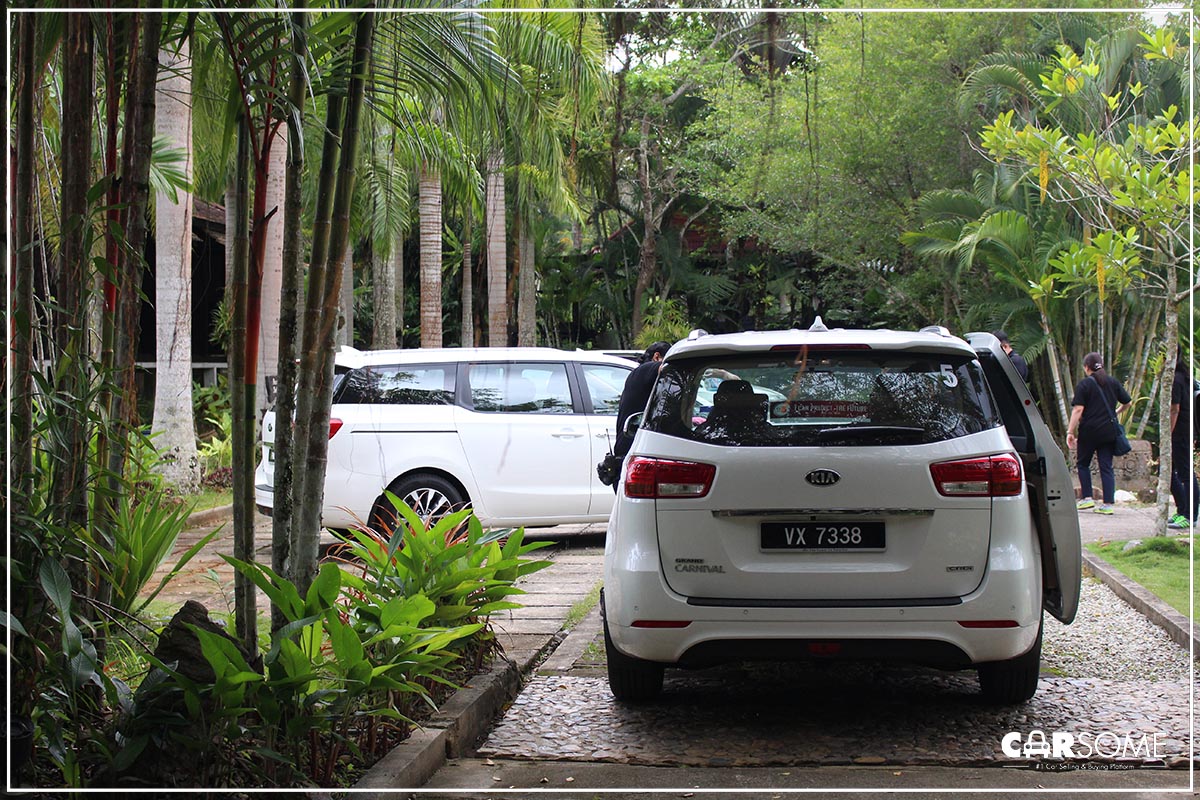 Given the brief time we had with the Carnival, it was impossible to thoroughly assess the vehicle in and out, but on our first impressions, it was a real funfair. For a more scrutiny over the little details, stay tuned for our review article in due time!

Find out more on the specifications of the all-new Kia Carnival here!

Looking to get rid of your 20-year old vehicle as soon as possible? Find out how!