Wise or Foolish? Should You Buy a Used BMW 3 Series (F30) For the Price of a New Honda Civic?

In less than a year, a PHEV or Plug-in Hybrid Electric Vehicle BMW 330e was released, which was the first in a BMW 3 series.

In this article, we will be focusing on the F30 BMW 3 series LCI as it adds a lot more features and improvements over the pre-facelift model.

The most notable features at the time are as follow:

The exterior of the F30 BMW 3 series LCI came with redesigned headlights, redesigned rear lights, reshaped exterior, and different rims. The interior was also slightly changed to improve storage space in the center console (the middle compartment where the handbrake is). Moreover, it came with electric seats (memory function for the driver only), cruise control with braking function (the car automatically maintains a specified distance with the car in front and slows down the car when needed) and brake energy regeneration (when you brake, heat is produced, also known as kinetic energy, which charges the car’s battery) as standard.

Entertainment and communication wise you get an AUX-IN connection, Bluetooth connectivity, USB ports, on-board computer with Check Control, BMW ConnectedDrive and a 6.5-inch media unit with 6 speakers while only the BMW 330e Sport Line and the M Sport trim gets an 8.8-inch media unit with nine speakers.

The on-board computer with Check Control basically monitors vehicle functions and alerts you to any malfunctions in the systems monitored such as when your tire air pressure is low. Furthermore, the BMW ConnectedDrive provides a few functions such as Intelligent Emergency Call (it automatically contacts the BMW call center during an accident to activate the chain of rescue as quickly as possible), Concierge services (you can connect with BMW Call Center, who will become your “personal assistant” to find the nearest destination of your choice instead of using your smartphone) and Remote services (which allows you to connect to your vehicle using your smartphone and control the functions of your car).

The biggest change in the F30 BMW 3 series LCI was the new 2.0-liter turbocharged engine (Codenamed B48) found in the BMW 320i, BMW 330i and BMW 330e while the BMW 318i gets the new 1.5-liter turbocharged engine (Codenamed B38). All models are paired to a ZF eight-speed transmission and power is delivered through the rear wheels only (this means that the rear wheels move the entire car).

Here’s a summary of the power output for all models:

Below are examples of some of the BMW 3 series (F30) available on Carsome:

From our website, the price for a used F30 BMW 3 series LCI ranges from RM103,000 to RM159,000 depending on the year, the model, the trim, the condition, and the mileage of the car. The term “fair price to pay” is purely a subjective opinion but we have chosen three models based on our expertise that are considered “fair”.

For what is considered the best of both worlds (M Sport without the Adaptive M Suspension as the replacement costs are higher), you can get a 2017 BMW 330e M Sport for RM135,400 with a mileage of 61,815 kilometers. With a 10 percent down payment, the estimated monthly installment is RM1,484 per month.

Nevertheless, if you are looking for the highest level of comfort available then we recommend the 2016 BMW 320i Sport Line for RM119,900 with a mileage of 81,043 KM. With a 10 percent down payment, the estimated monthly installment is RM1,314 per month.

Which BMW 3 Series Model to Buy?

We recommend the BMW 330e Sport Line or BMW 330e M Sport as it gets the upgraded 8.8-inch media unit with nine speakers, the equivalent performance of the BMW 330i on paper and better petrol consumption as it is a Plug-in Hybrid Electric Vehicle. 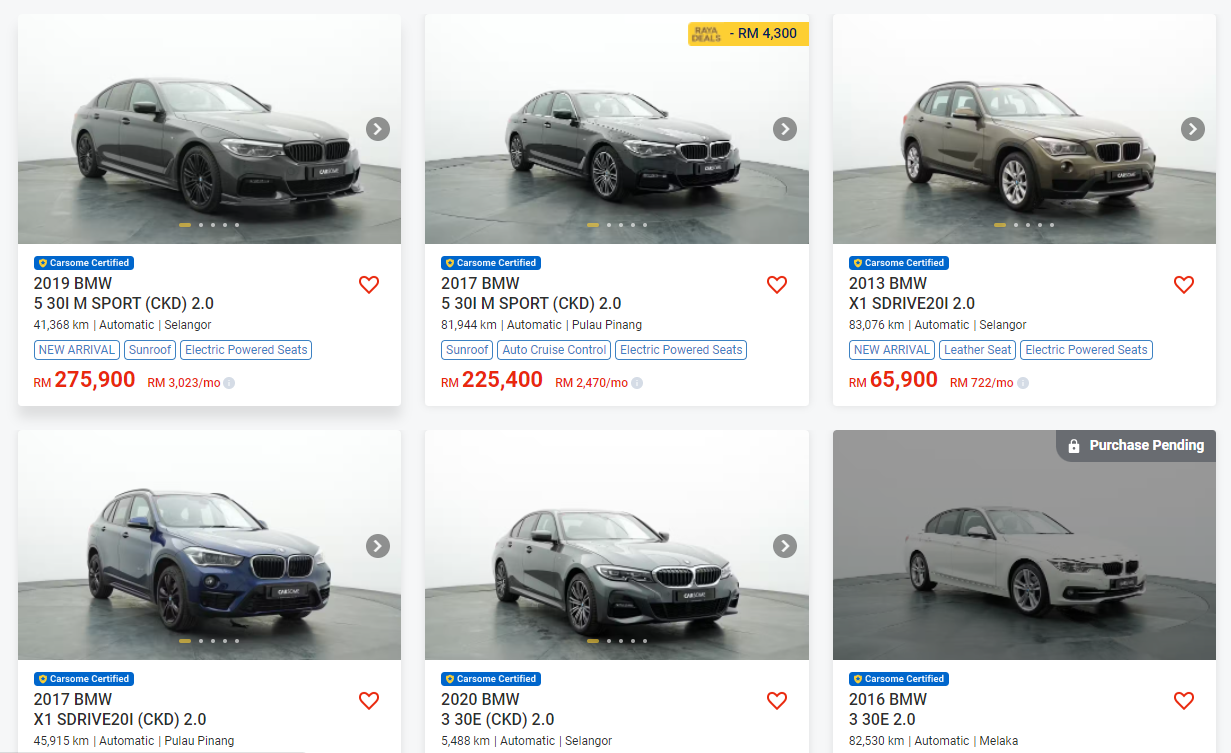 Do note that the BMW 330i is quite rare and therefore the prices average higher than a BMW 330e (around RM160,000). This significant price difference does not come close to the replacement costs of the battery pack on the BMW 330e.

The BMW 3 series has always been preferred by many car enthusiasts because it has always been in BMW’s DNA to produce “The Ultimate Driving Machine” for “Sheer Driving Pleasure”. The F30 BMW 3 series was and still is relevant even after 10 years since it was launched. With the price depreciation, you can’t go wrong with the 6th generation BMW 3 series as it is a well-balanced car aimed at buyers who seek sporty driving without sacrificing comfort.

So, if you are browsing for a quality pre-owned BMW, you can check out Carsome Certified BMWs inventory here.