What We Liked About The Mercedes-Benz C 350e 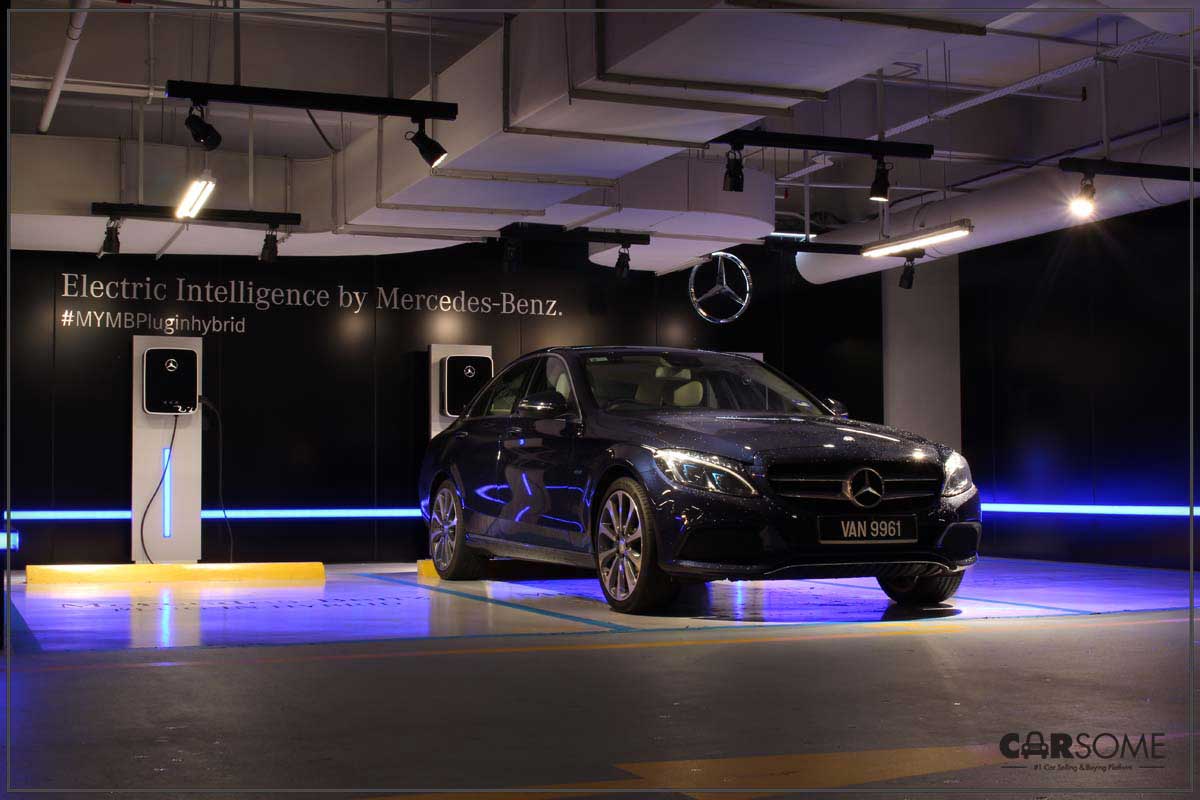 The PHEV market locally is steadily growing. Yet, there are only three main brands in Malaysia that seem to be invested heavily into the platform of the future of electric vehicles. However to get there, the transition between petrol and electric is one that requires more than just the hybridisation of these vehicles. For Mercedes-Benz, the brand is focusing on luxury, and the C 350e does just that. 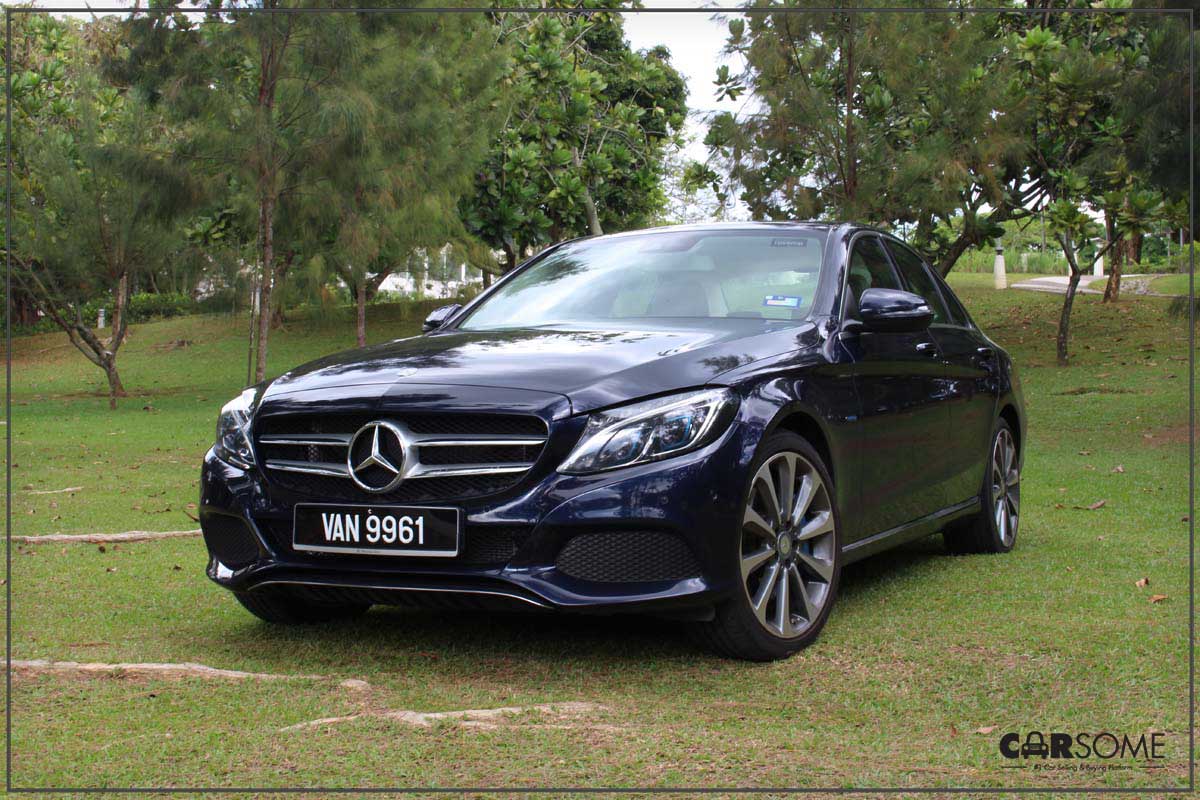 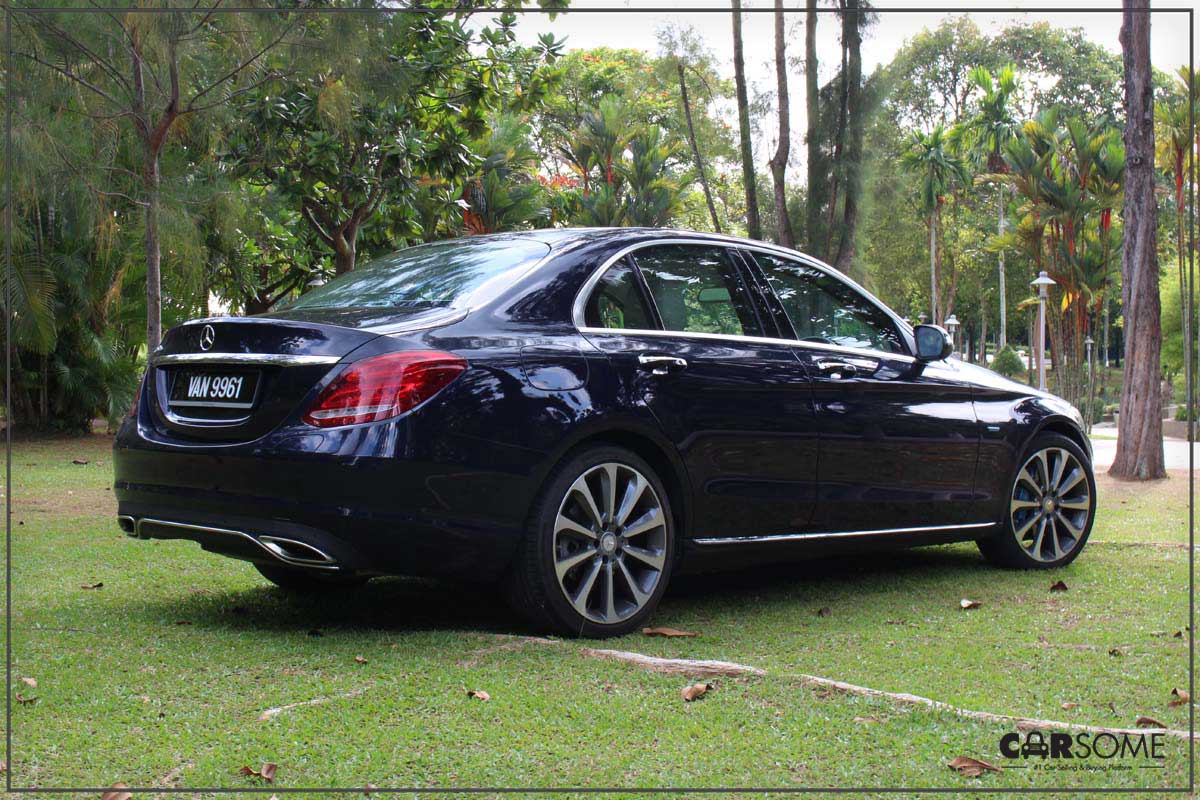 The W205 C-Class design is certainly the most striking showcase of the brand’s current design language (together with the W222 S-Class and W213 E-Class). Here in its smallest sedan form, the design is best represented as a minimalist form that brings together “precise lines and sculptural surfaces that create progressive light and shade effects.” While the C-Class has been around locally for about four years now, the new C showcases automotive passion by way of a contemporary design idiom. As Gorden Wagener, VP of Design at Daimler says, “it demonstrates sensual purity and interprets modern luxury on a new level.” 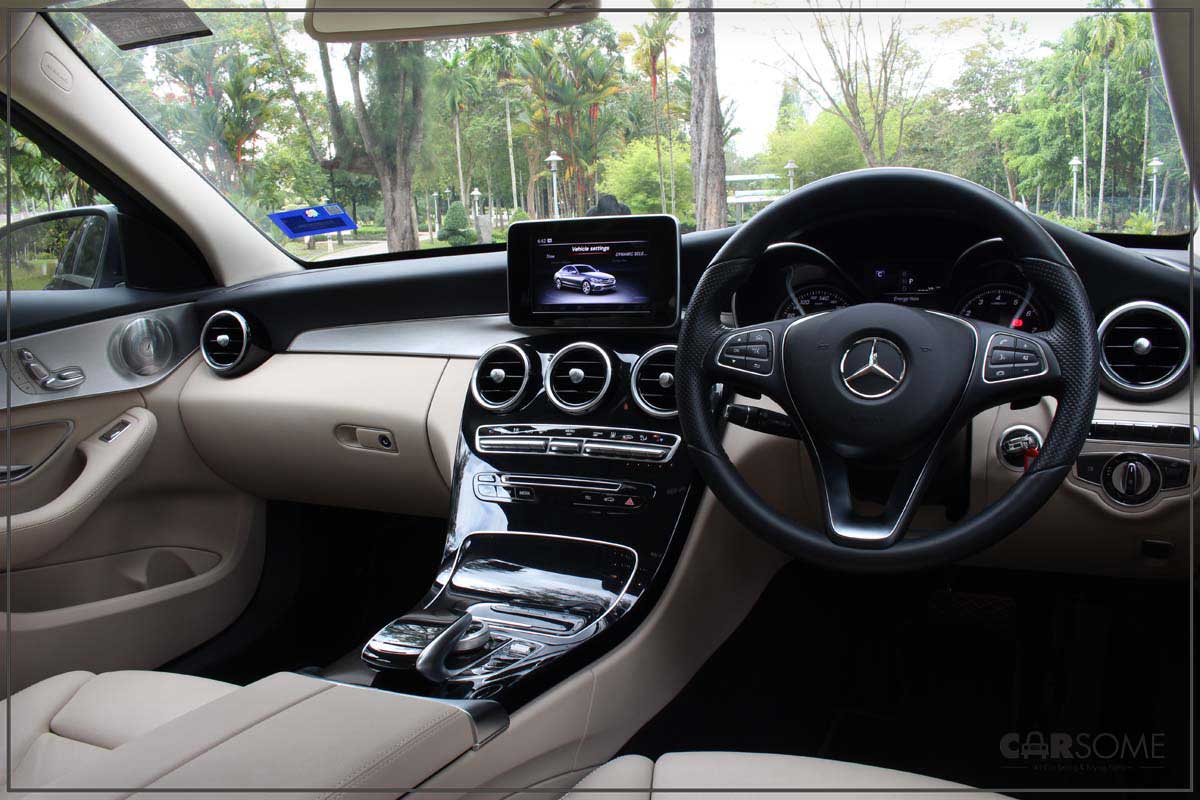 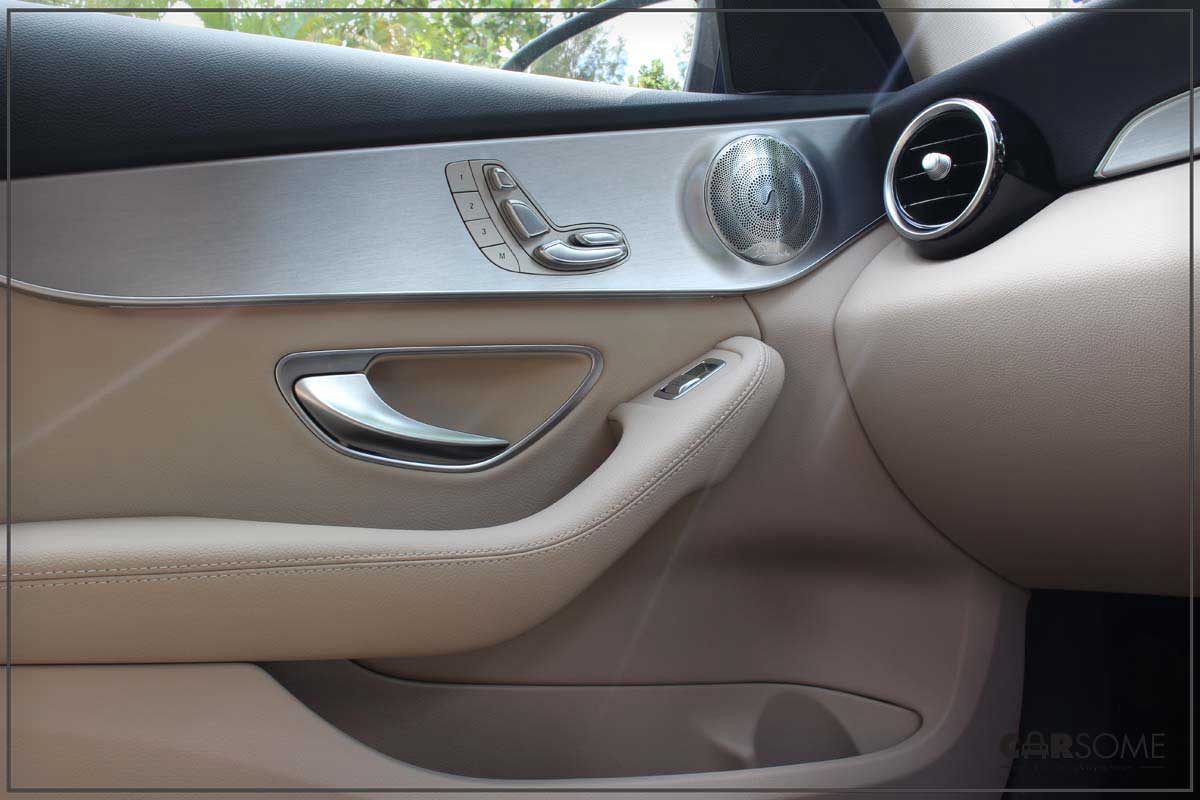 When it comes to the cabin, the C-Class and current updated line-up of vehicles truly sets the bar ahead of other marques in its class. The new centre console features flowing lines that sweep elegantly from the centre air vents to the centre armrest. Here the trim on the C 350e that was tested best expresses the new form and lines. From the piano black centre console and silver finishes on the air vents, aluminium finishes by the door cards and matching circular Burmester speaker grilles, to the lighter silk beige tone of the seats and doors panels, the new design is an exclusive cabin to be in. 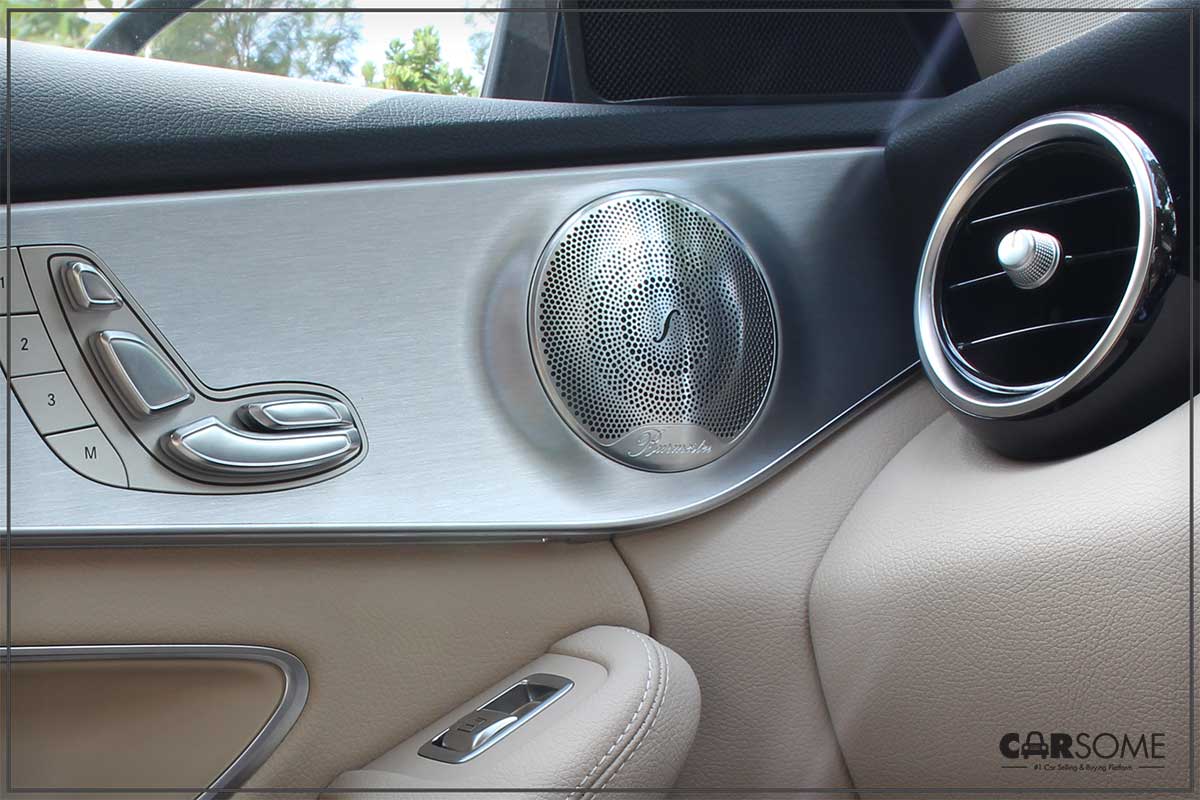 In terms of sound, we really liked the Burmester surround system with crisp highs, mids and enough bass to keep our ears tuned and happy. In fact, we like the audio here and rank it second behind the exquisite Bowers & Wilkins set up in Volvo’s range. 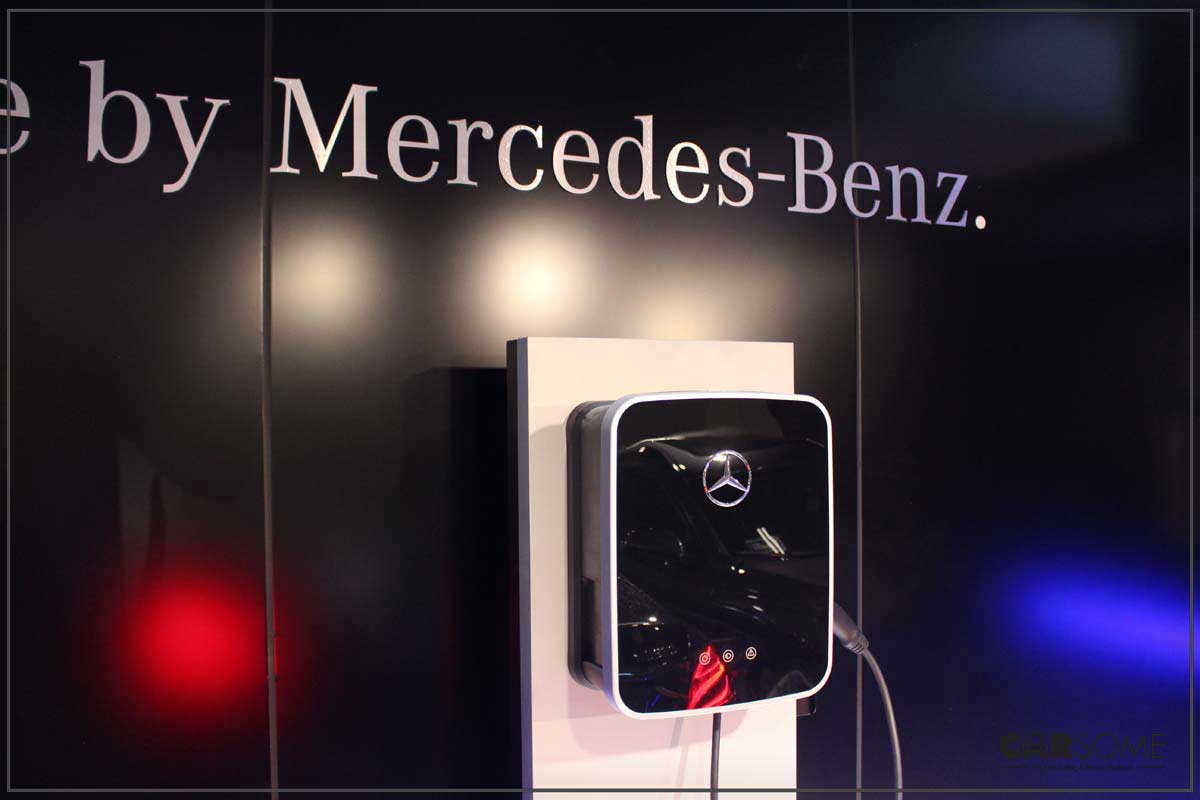 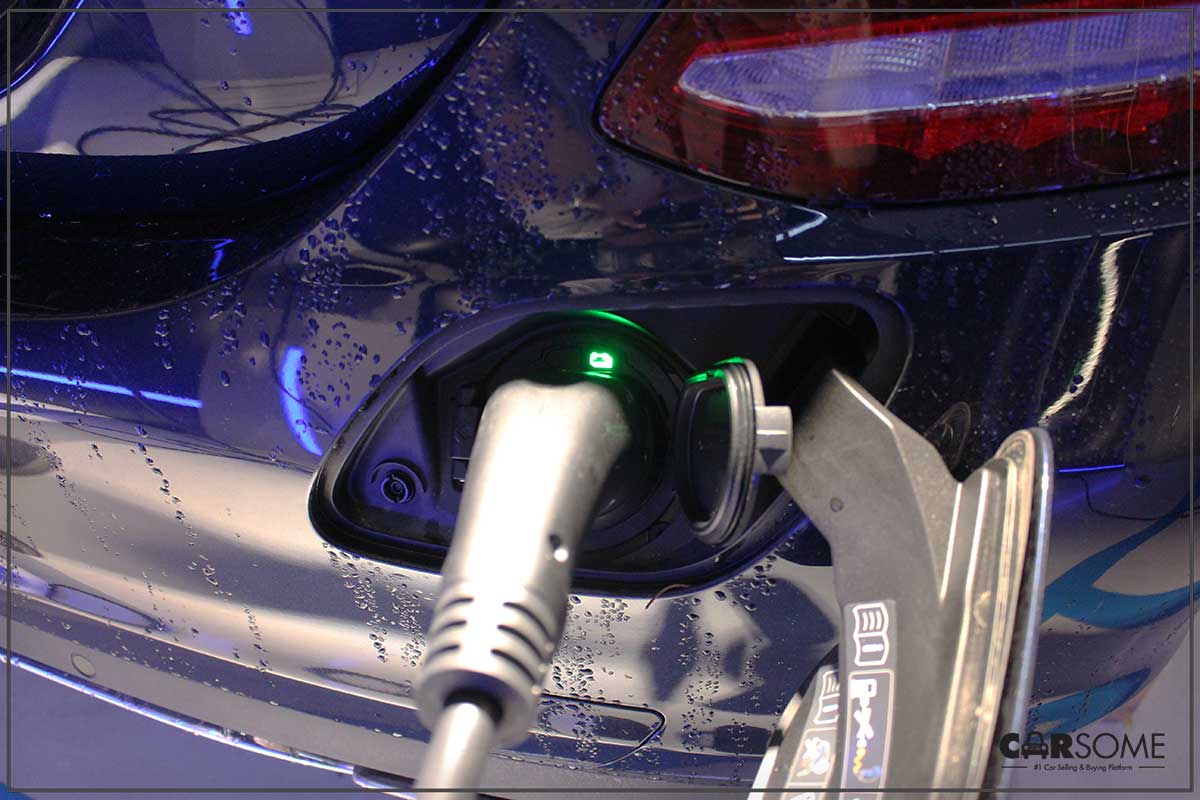 The C 350e is Mercedes-Benz Malaysia’s first plug-in hybrid model and one that is also proudly assembled in Pekan, Pahang. In terms of power, the C 350e houses Mercedes’ 2.0-litre petrol with an output of 211 hp and 350 Nm of torque while the electric motor is at 80 hp and 340 Nm, combined, the system has 279 hp and 600 Nm put through the 7G-tronic automatic transmission. 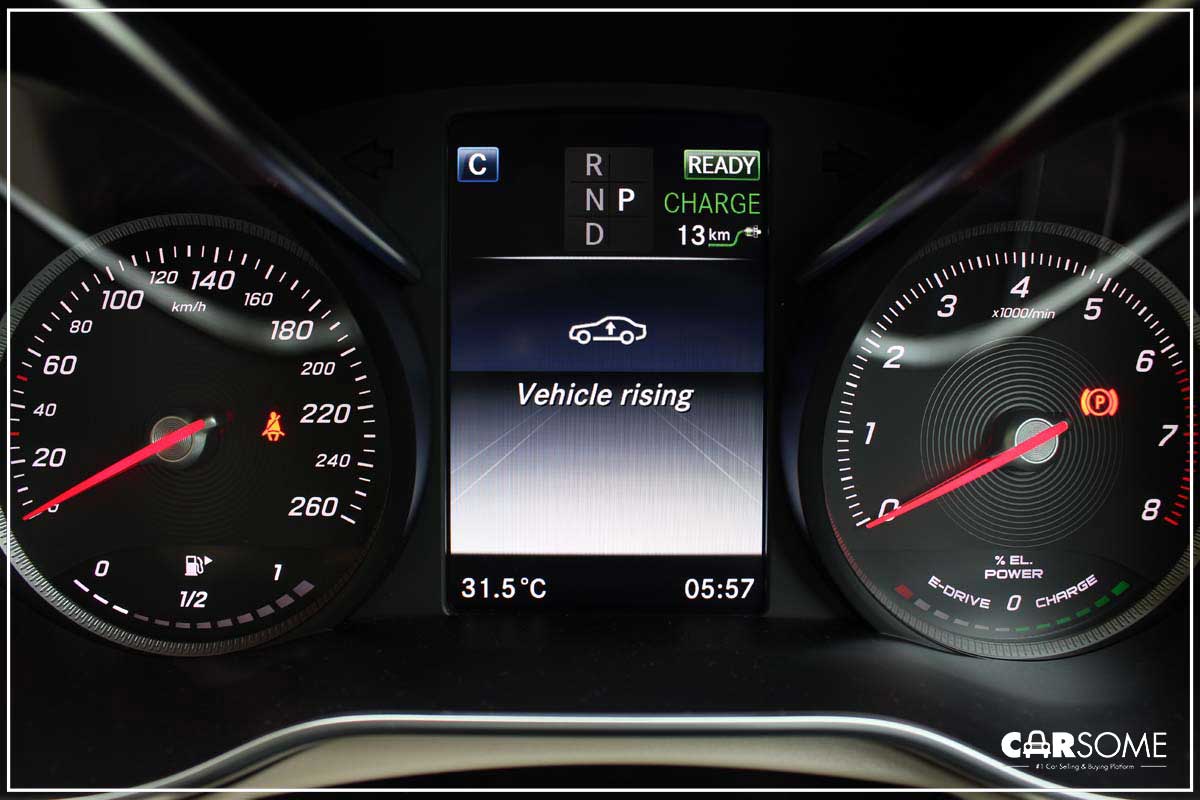 Power aside, the setup of the C 350e sits on the brand’s Airmatic air suspension system that makes driving on uneven surfaces much smoother. Yet, if pushed a little too quick over larger undulations, the suspension does feel a tad elastic towards the rear. 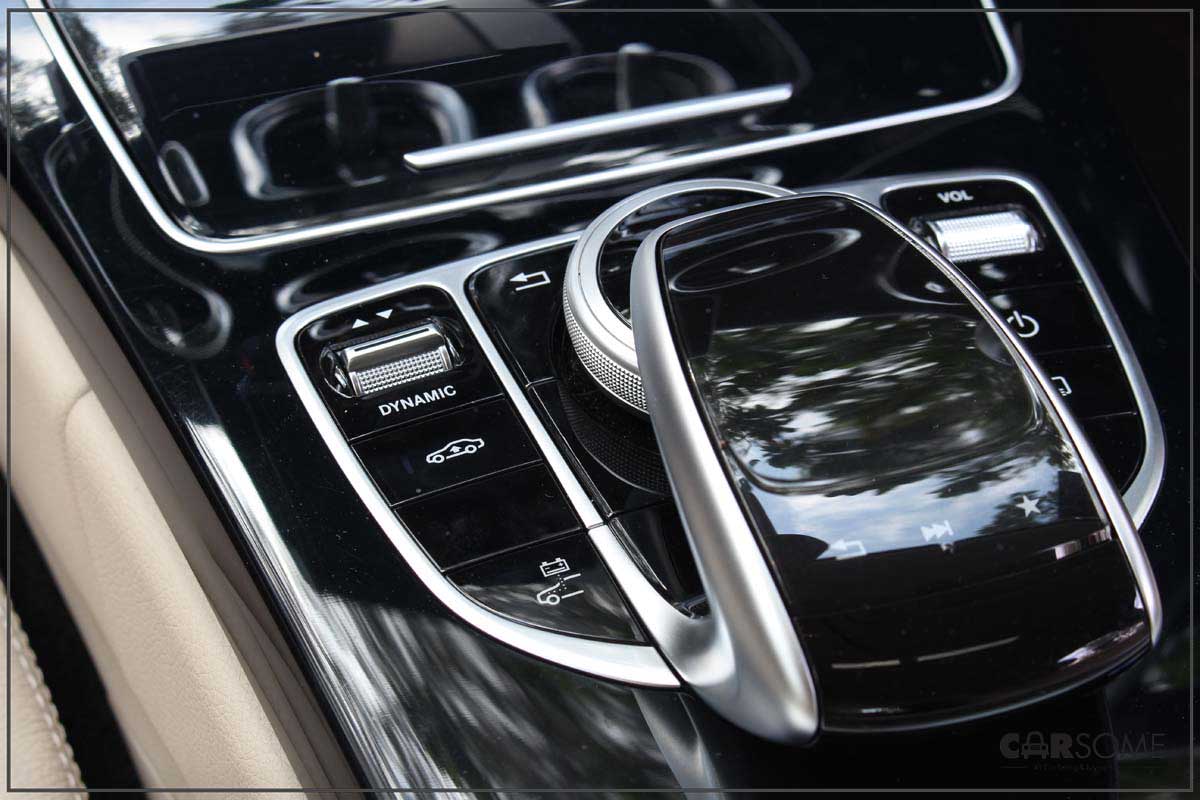 In terms of real world tests for us, a full charge of the batteries provided 24 km of drive. On top of the standard Eco, Comfort, Sport, Sport + and Individual, the electric modes available within the system is Hybrid, E-Mode, E-Save and Charge. 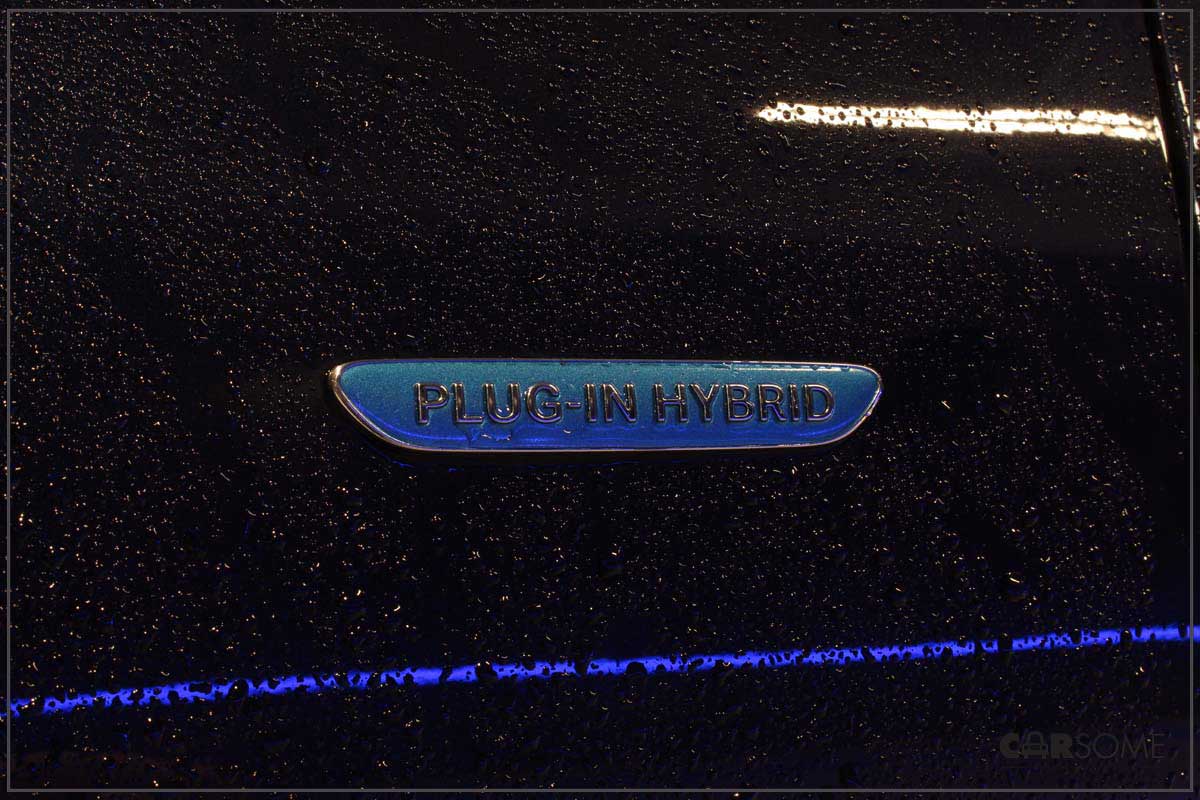 For the C 350e, the Charge mode is the standout point for their range of “EQ branded vehicles” as of April 2018, as its purpose is to use the combustion engine to charge the electric motor (making the former run perpetually during the charge cycle; disengaging electric drive) which will take about 60 km on motorway speeds to replenish fully. Should you consider popping by the brand’s charging stations at various Klang Valley malls, the charge using the Type 2 connectors should complete in under 2 hours.

What is good to note though, is that the electric modes are only accessible through Comfort and Eco dynamic settings.

Like all the other PHEVs we’ve driven and reviewed, the C 350e is just the same at the get go. Transitions from electric motor to combustion is seamless for on the road driving, but on a standstill where battery power is limited and the petrol engine has to be activated, the start is inherently the most noticeable here compared to the other PHEV marques. Floor the throttle on Hybrid mode and the C 350e will activate Boost mode, providing the full grunt of the system which proves to be really fast.

What Could Be Better

The infotainment system. While the software used in the current Comand-APS NTG 5 system is the latest and is similar to that first introduced in the 2014 S-Class, we believe it requires a faster processor to work between the menus. In our test vehicle, it required waiting (sometimes in excess of 5 seconds) to move between selected options. However as with the recent announcement of fully digitalising the instrument cluster and infotainment system with the next generation MBUX as seen in the all-new A-Class, we believe the ease of use and interaction of the Comand system will certainly be improved. 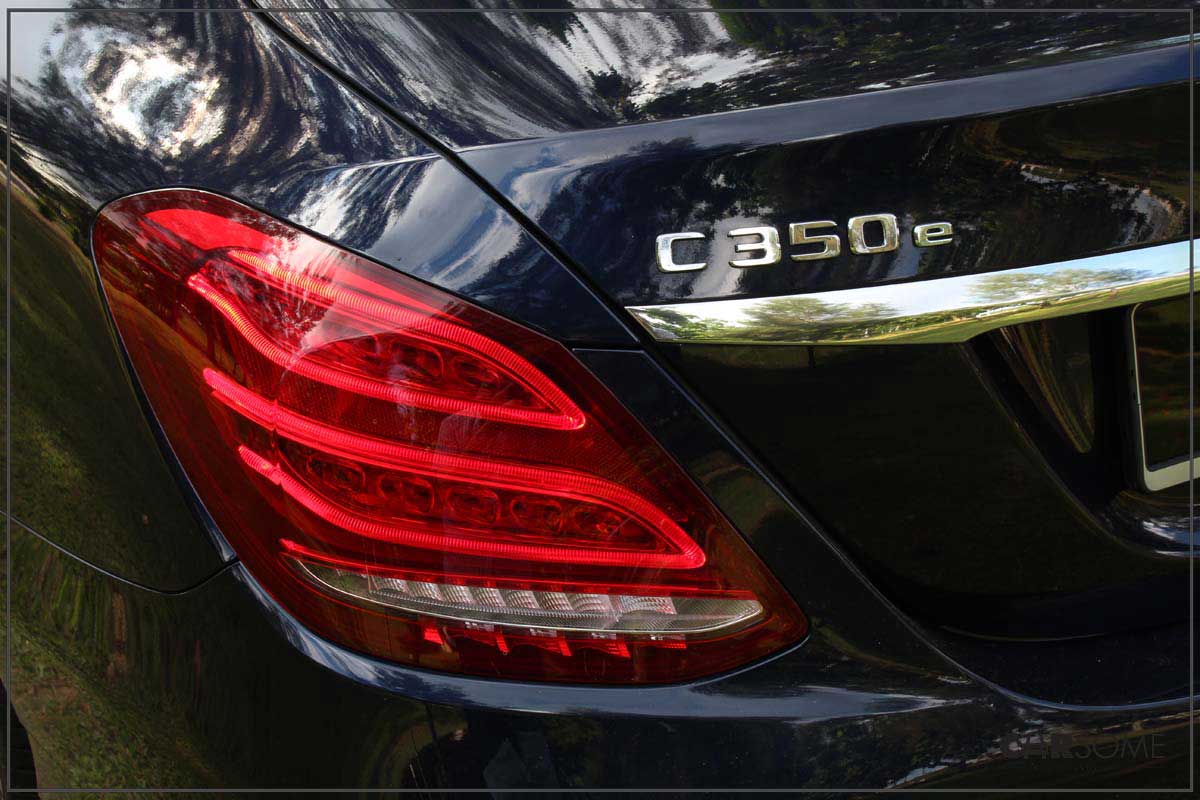 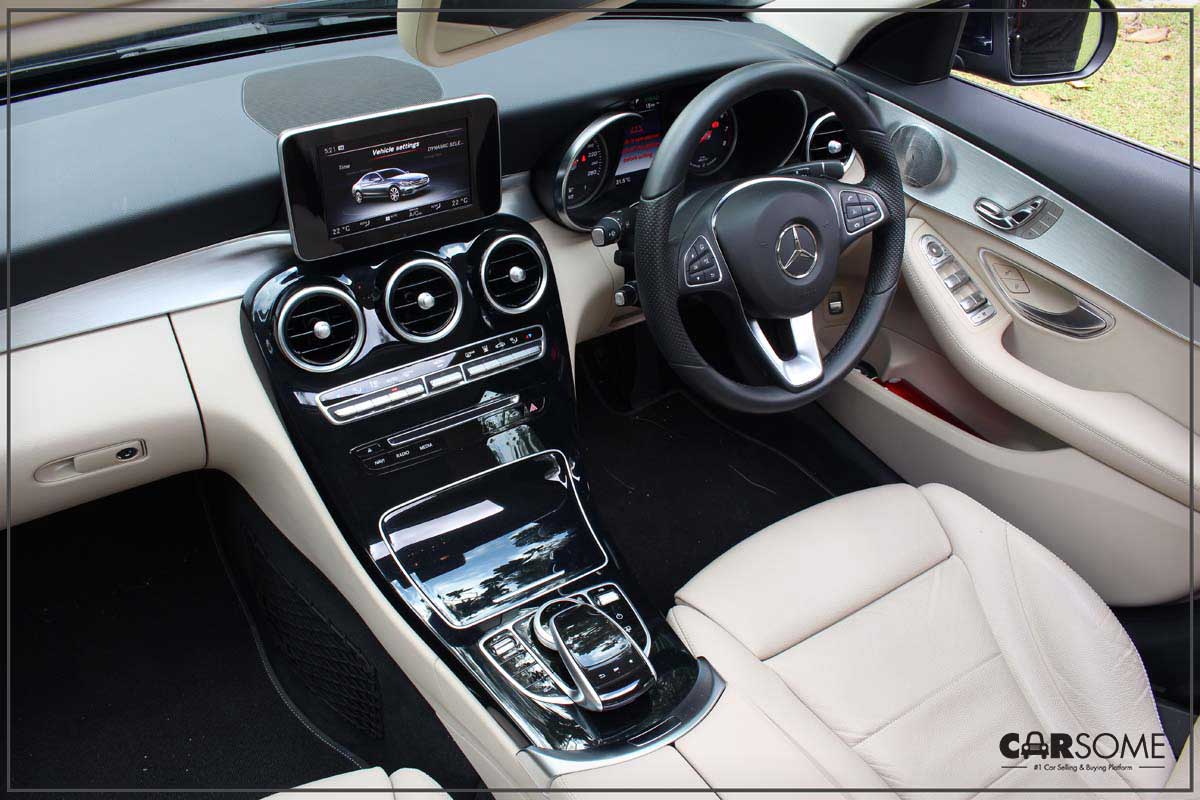 The cabin of the new C-Class is a great place to be in. In fact, when it comes to exclusivity, comfort and class, we feel that Mercedes has really hit the nail on the head in exterior and interior design with this one. However, does it warrant the RM 282,955 (without GST) and RM 41,000 ahead of BMW’s 330e M Sport? If the price is right, why not?

If you’re looking for power, Mercedes has the AMG’s that’s proudly Made in Malaysia. Click here to find out more about the C 43 and GLC 43

Perhaps something from BMW that could win you over the PHEV competition? Click here for a rundown of iPerformance vehicles.

Sell your car through Carsome and find out how easy it is to sell fast, fair and free!