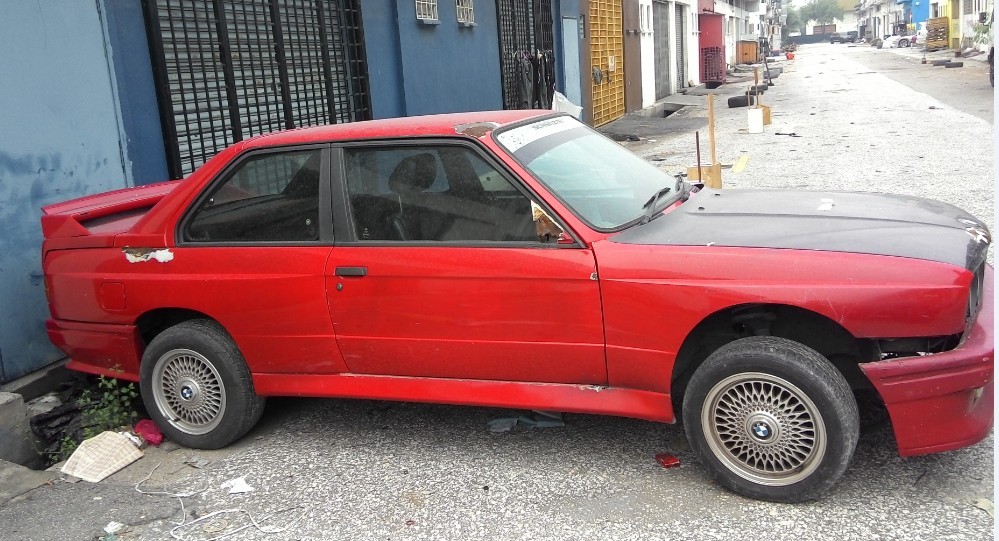 No E30 BMW 3-series coupe deserves to be in this state. Credit: serayamotors.com

Our neighbour down south may struggle with this concept but in Malaysia, it’s not uncommon to own a 20-year old car. Unlike Singapore whose vehicles are bound by the Certificate of Entitlement (COE), over here, a car does not cease to exist unless we deem it unworthy of being so, whether mechanically or financially.

What’s the fate then for a car that’s past its prime and road worthiness? What are the options for an owner looking to dispose a heap of well-aged metal?

Simply Give It Away 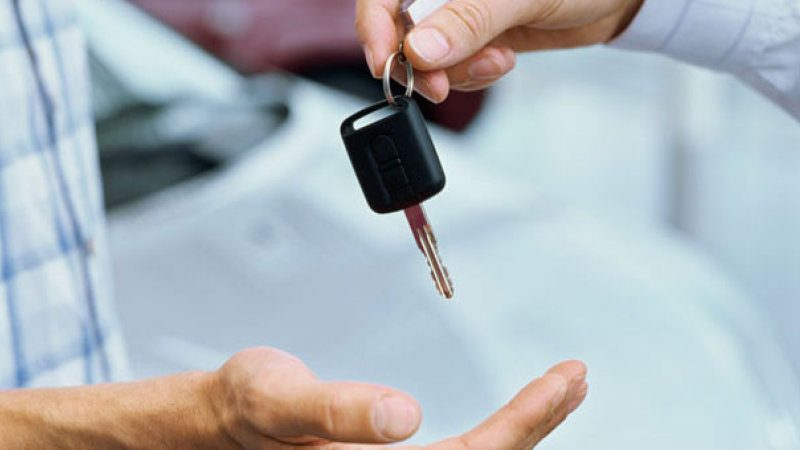 Sell off your 20-year old car you’d pocket a few thousand, give it to your 18-year old nephew and he’d cherish your generosity for life. Credit: Autoblog

Cars which have surpassed the 20-year milestone, is most likely seasoned beyond its prime. In its state of existence, it’s probably not worth more than RM 10,000 and options are usually limited to it being used as a spare vehicle or being sold for cheap. Better yet, for the finally privileged, you might choose to give it away.

Sell It Privately Online or To Used Car Dealers 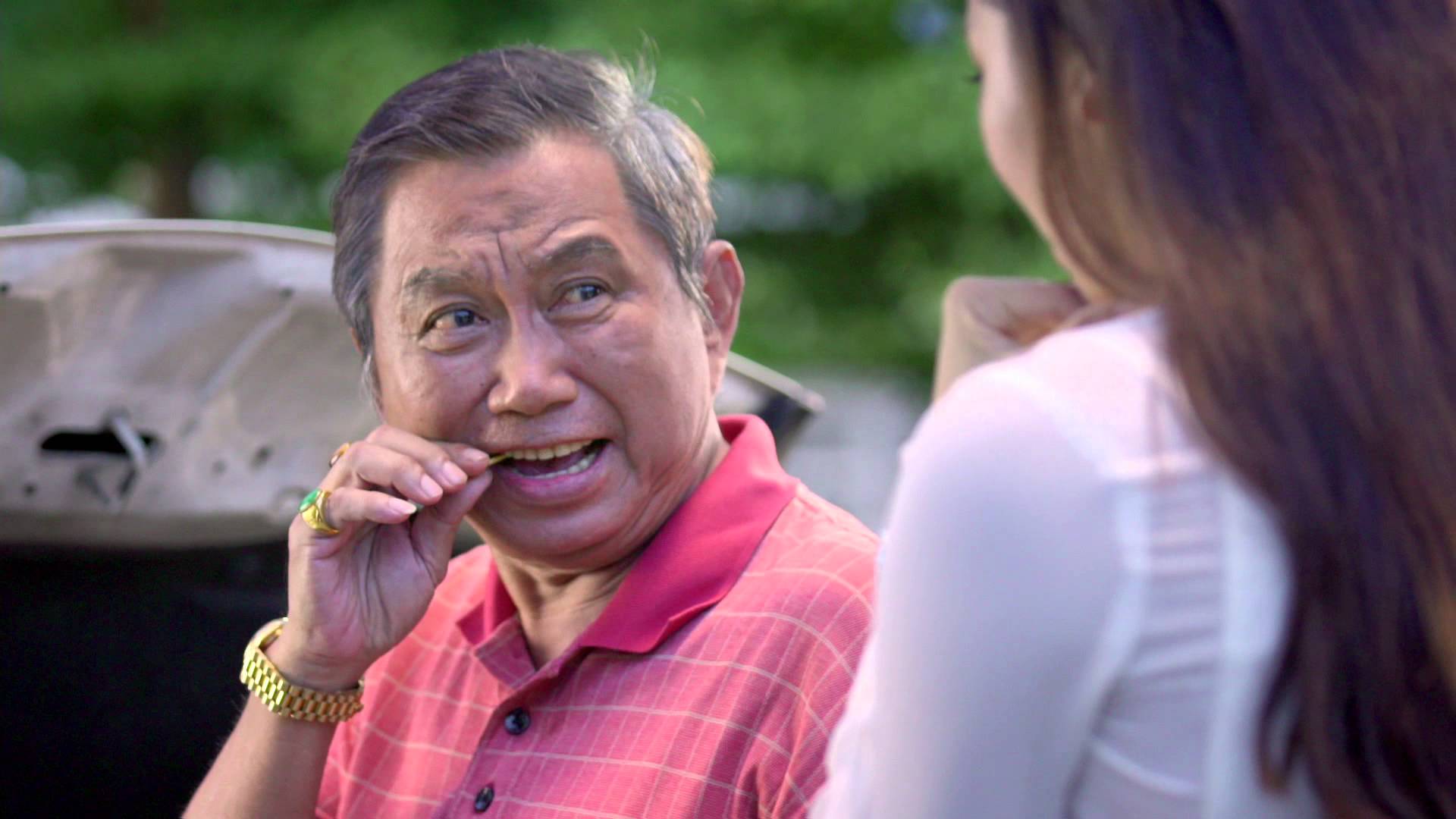 We don’t have to remind you of this hilarious advertisement. Credit: YouTube

Selling an old faithful through one of the many classifieds websites or used car dealers are the more common way to go. Diligent research and knowledge is required to set a realistic figure in which you’d like to receive for your car – avoid pricing your car away from prospective buyers. 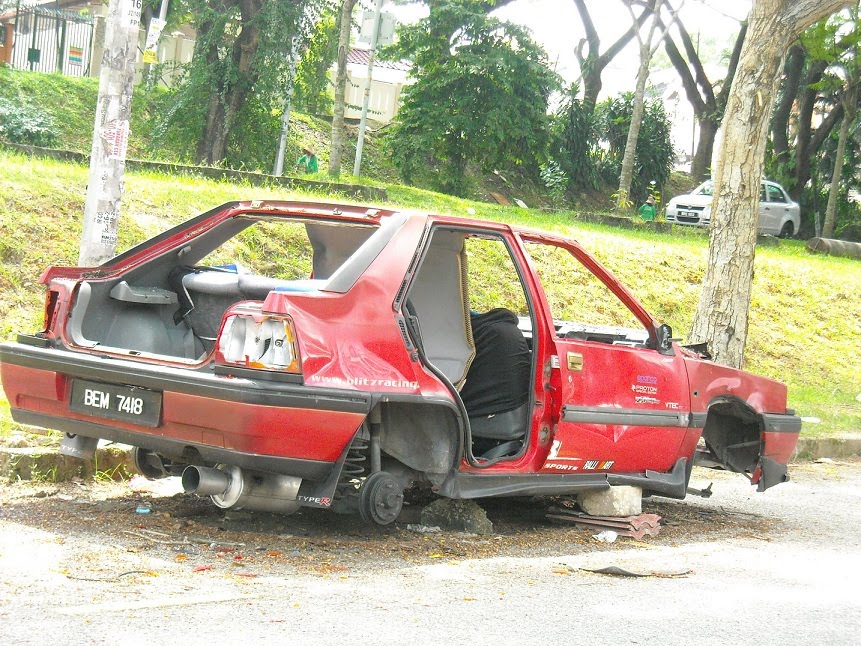 Abandoned cars are a common sight in our neighbourhoods. Why not part it out and salvage the valuable bits rather than benefitting looters? Credit: twilightzone518.blogspot.com

It may be a tedious and time consuming process but most times, parting out a car and selling its parts individually can yield higher gains than selling the car itself. Selling off a 1990’s Corolla may only see it fetch a little more than RM 5,000 but selling off its engine alone will see a return of more than RM 1,500. And that’s excluding the gearbox, doors, seats and trims etc.

There are many pages on Facebook and classified websites to advertise such parted out items, but be prepared to play the waiting game. What happens then to the bare frame of the vehicle when you’ve reliquished its parts? 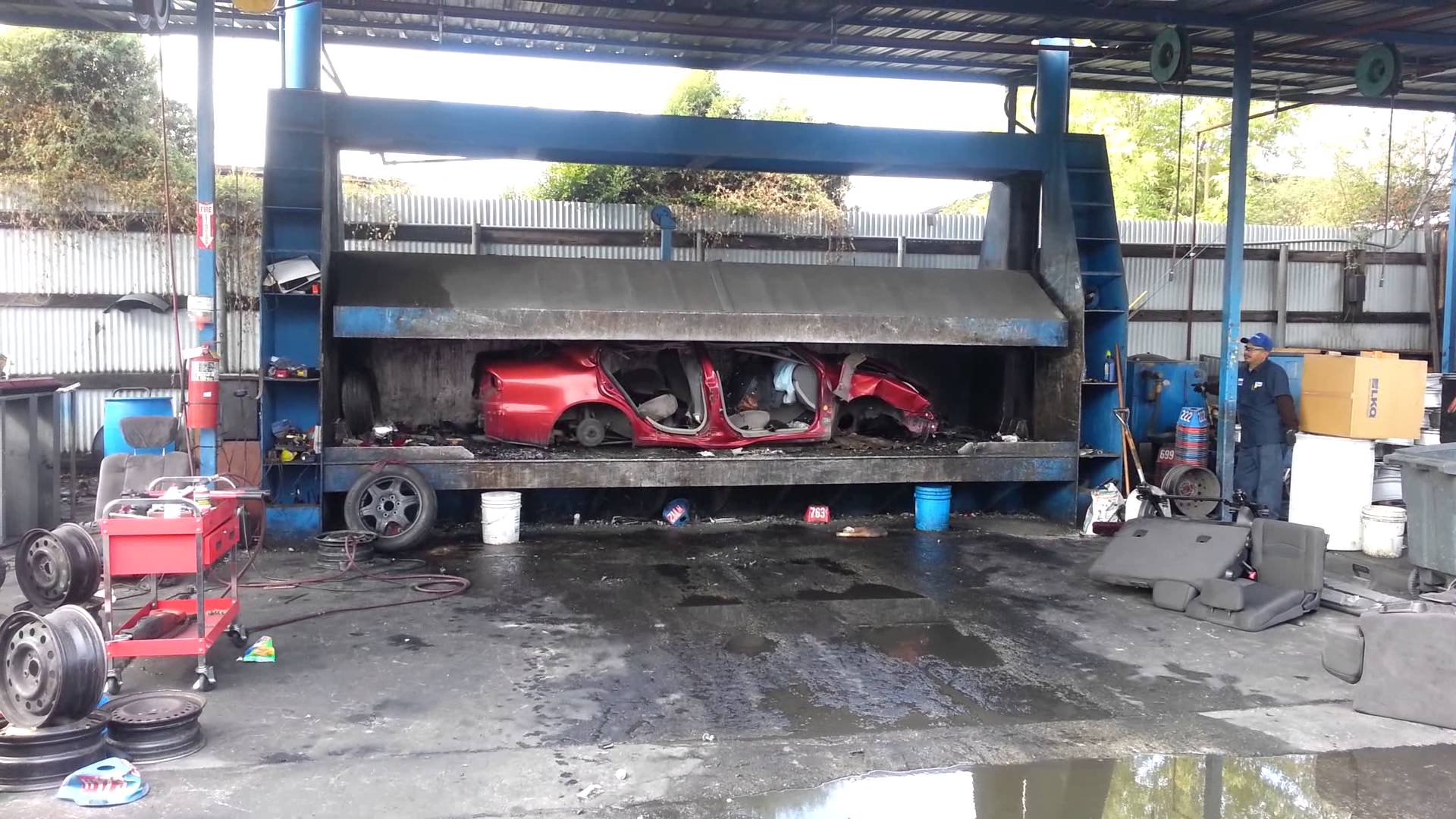 Seen as the final destination for the metal scraps once part of the construction of a car, there is no shortage of scrap yards that will happily remunerate you for what used to be your work horse.

One particular establishment, Thanam Industry Sdn Bhd quoted that you’d be paid per pound metal obtained from scrapping a car. They also highlighted that if a car is still deemed to be of some use, satisfactory prices would be offered.

From the to-be-scrapped vehicle, various components and items such as batteries, carburettors, or seats will usually be salvaged for refurbishment. The rest, such as the doors and body of the car, are typically sold for material.

Sell It via Carsome 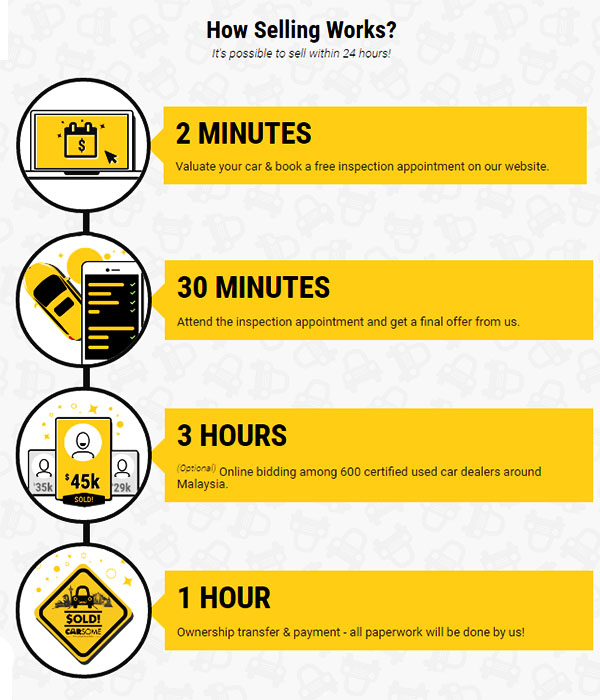 Selling a car may sound as easy as offloading a thoroughly worn out, old pair of shoes but the reality of it isn’t as simple. Dealing with countless of “prospective” buyers, long queues at Puspakom and even longer ones at JPJ are one of the many perils of off-loading your own vehicle.

We offer an alternative way of selling your car, the 21st century way if you will. Even if it was just an enquiry as to how much your vehicle is worth, simply log on to our website and key in the required vehicle information and discover the simplicity of selling a car if you decide to follow up on our offer for your car. 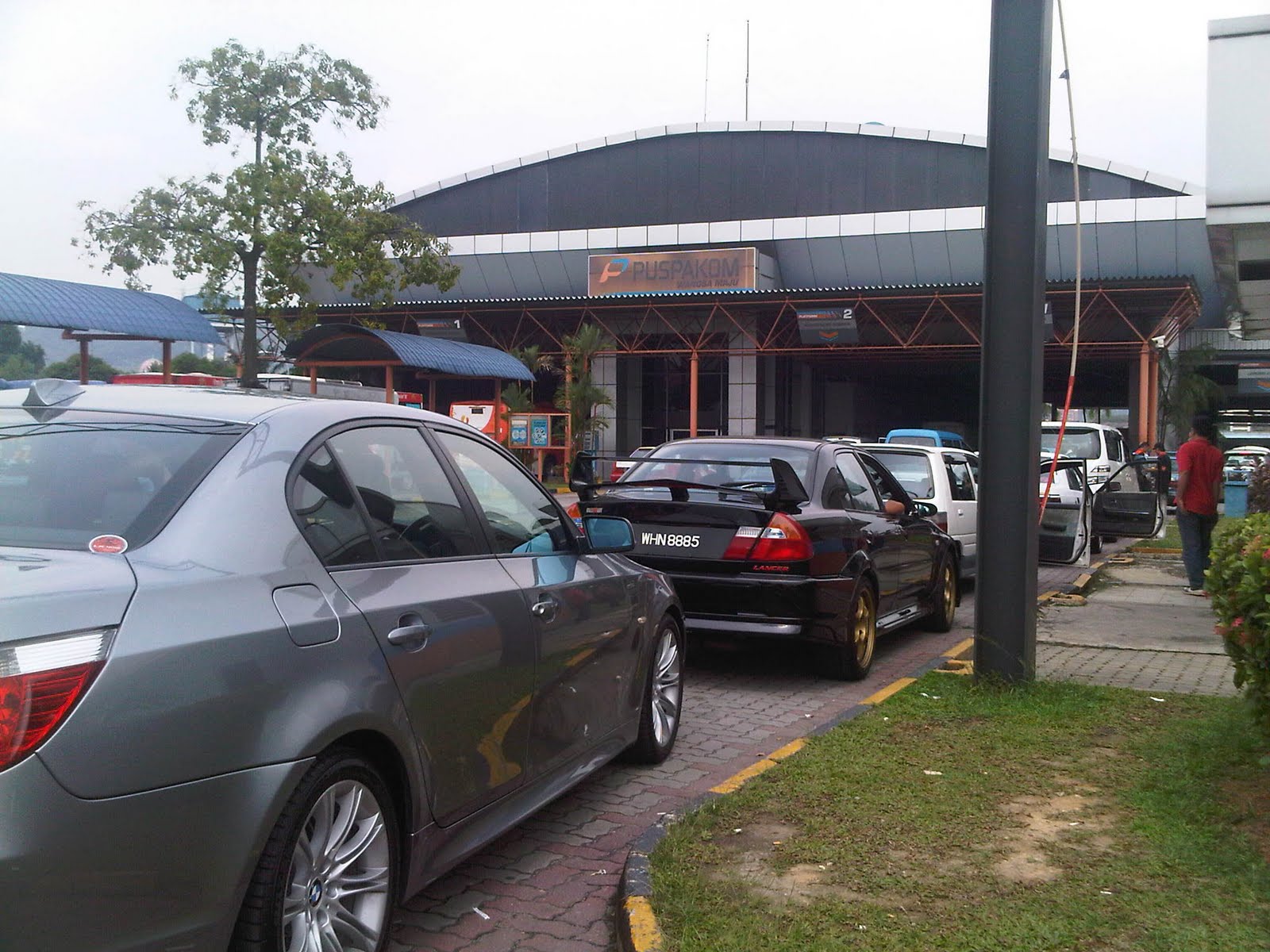 Part of being a one stop centre to get rid of your car, simply come over to our inspection centre for an appointment and upon coming to an agreement on the price and condition of the vehicle, we’ll take it from there on the transaction front.

We also ensure that you’d never have to endure the grievances that follow in the processes which come with the transferring a car to its new owner; in other words, no JPJ and Puspakom to endure.

The launch of the new G30 BMW 5-series 530i M Sport has sent shockwaves in and around the industry. Before all, check out this comprehensive infographic on the illustrious heritage of the 5-series badge.

Looking to sell your car? Fill in the form below for a quotation on your vehicle’s price! It’s fast, fair and free!