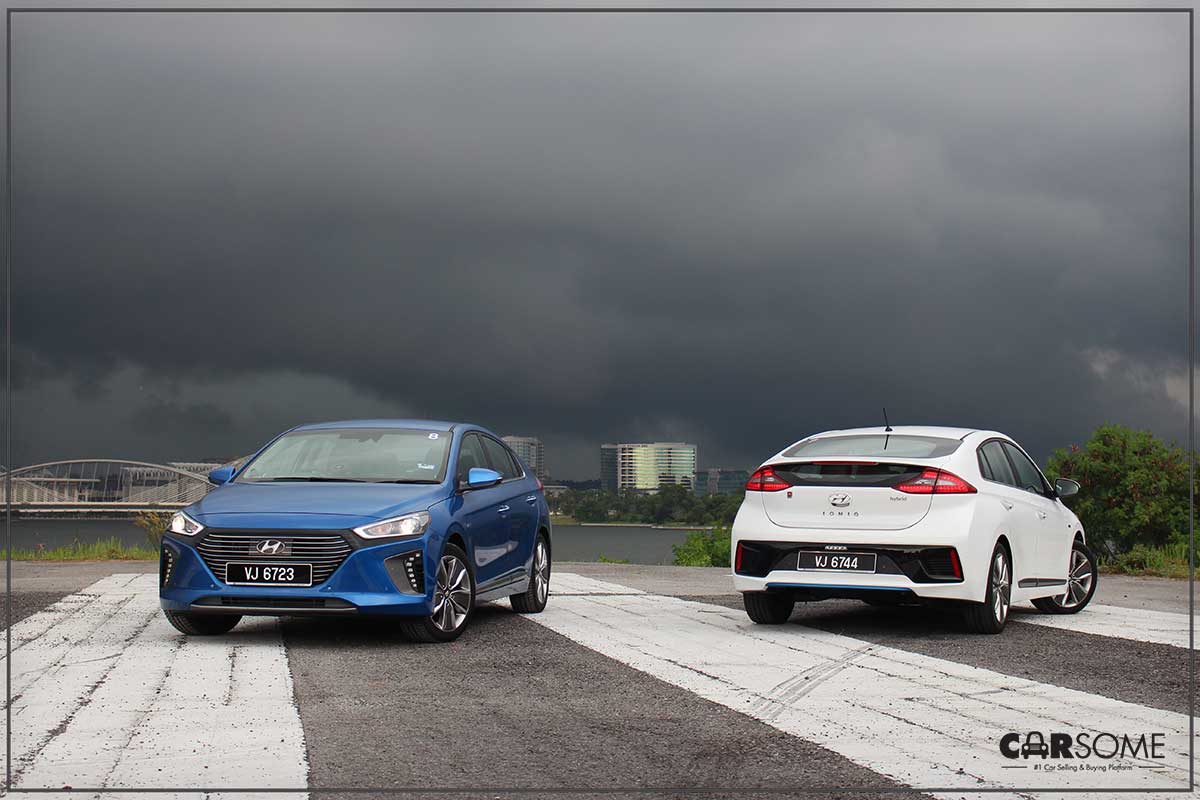 The first thing you must know about the Hyundai Ioniq is that in November 2016, it scored a full five stars on the Euro NCAP safety rating system. While that might not mean much to some, the Euro NCAP safety rating system is essentially more comprehensive in the passive and active safety categories, in comparison to others including those from the United States, Australian and ASEAN region. The reason for the full five stars also boils down to the standard equipment of robust crash avoidance technology which is one of the main highlights the Ioniq Hybrid offers. How then does the Ioniq fare in comfort and performance, and should you even consider the Ioniq Hybrid as your next vehicle? Read on to find out. 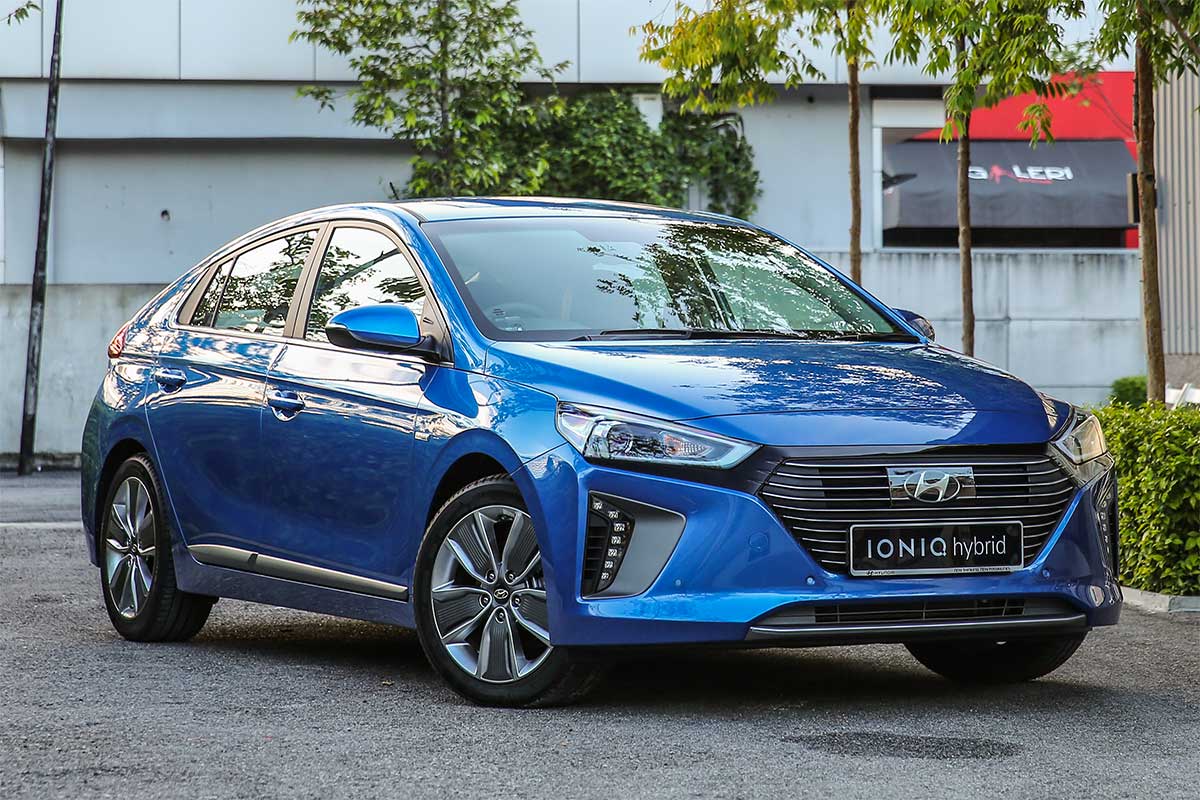 The Ioniq’s futuristic design was the main concentration for the brand’s designers when styling the vehicle. The fluid shape and clean lines emphasise the aerodynamic properties of the Ioniq, and with exterior panels that are designed to flex (which improve aerodynamics further), the Ioniq’s drag coefficient figure is an impressive 0.24 Cd. This places it on par with the current generation Toyota Prius. 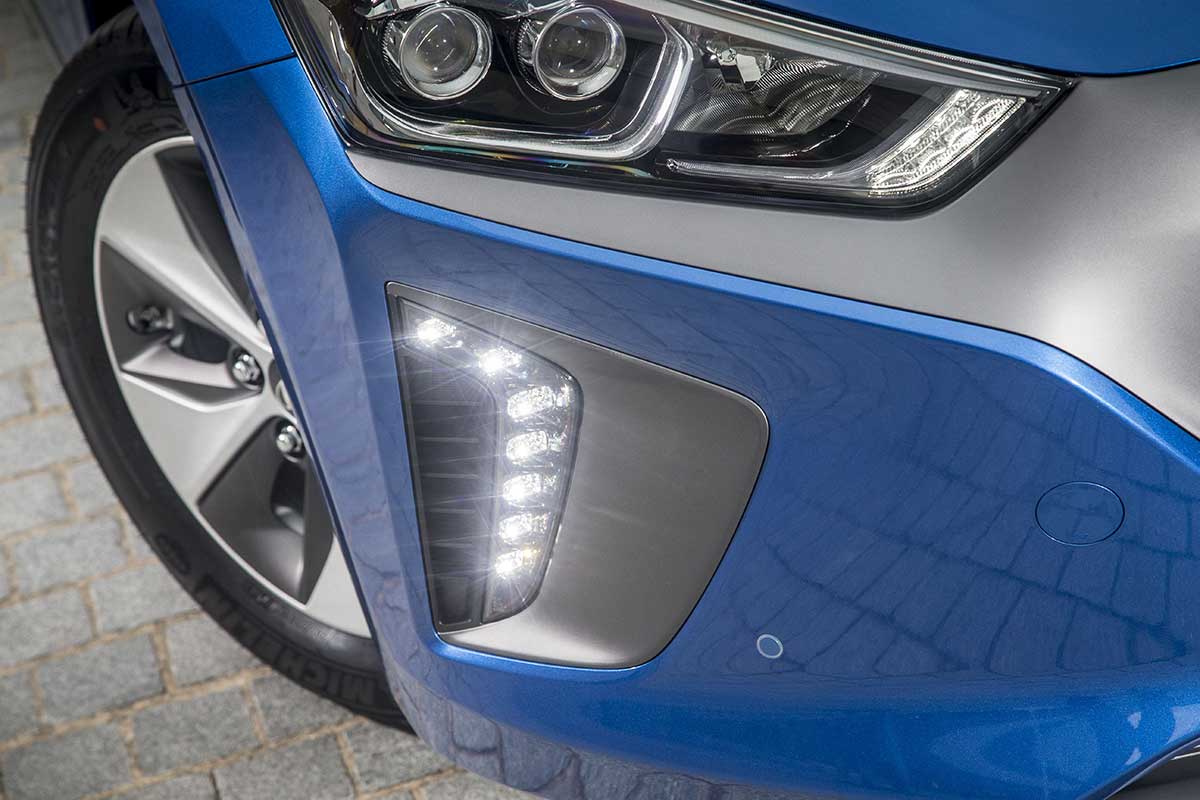 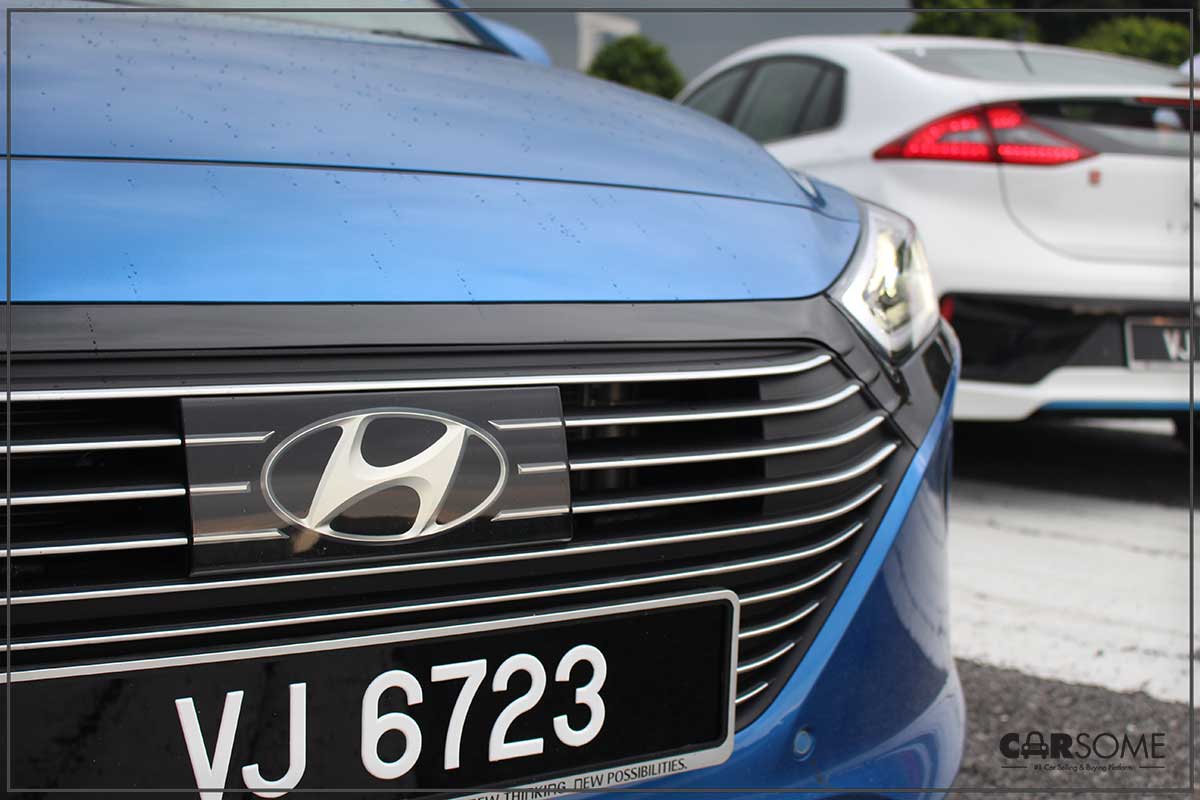 On the front, the Ioniq’s C-shaped LED lamps join the LED daytime running lights at the base of the bumper. Focus on the centre and the sensors for the vehicle is housed in the emblem right in the middle of the brand’s signature hexagonal grille. The grille itself is functional with an integrated active air flap for better aerodynamics. 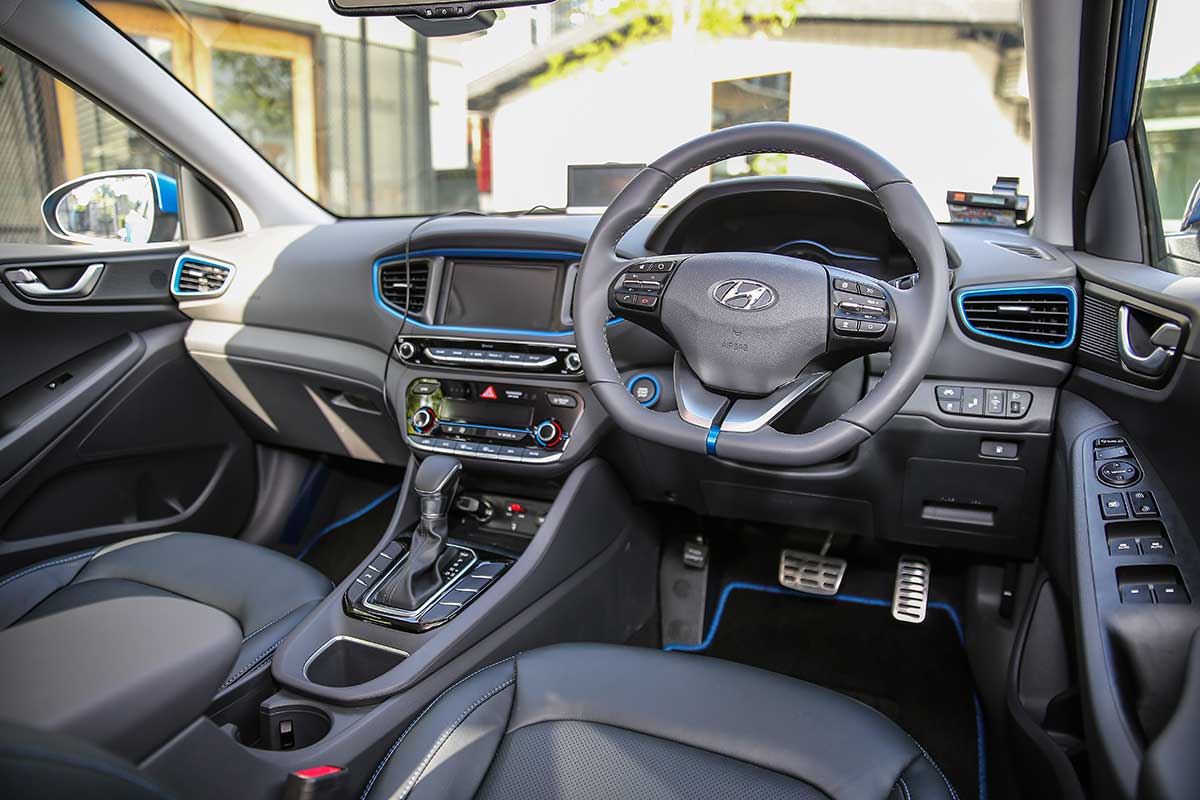 Here the interior blue character trim is present in all vehicle exterior colours.

Just like the sleek exterior, the interior also captures the futuristic appeal with simple and functional lines that separate the Ioniq from the brand’s range of models. For the local market, the blue character line present throughout the cabin – steering wheel, seat piping and air con vents truly provides some personality to the Hybrid name.

The boot is spacious with 750-litres of luggage space. 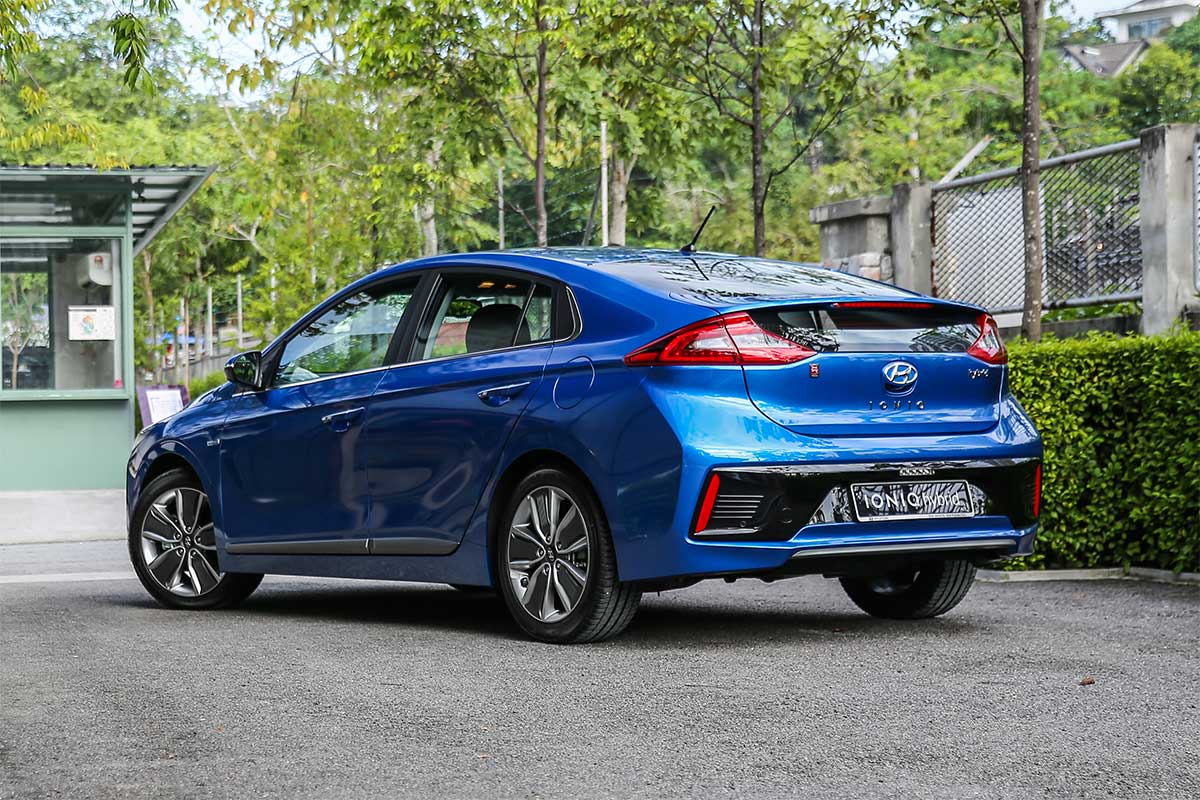 By balancing body weight and structural rigidity, the brand’s engineers looked at the combination of aluminium and ultra-high strength steel at various areas. The focus on weight reduction was one of the concerns that arose during the development of the Ioniq. And so aluminium was used in the hood and tailgate which reduces the weight by 12.4 kg compared to conventional steel, and also the cargo screen cover – which cut its weight by a quarter compared to those in Hyundai’s other models.

One of the strengths of the Ioniq also lies in its lower centre of gravity. With the vehicle’s hybrid battery positioned just under the rear passenger seat, the combination with the multi-link rear suspension provides a better ride and off-road traction. In fact, the centre of gravity height is lower to that of the current Mk 7 Golf GTi. 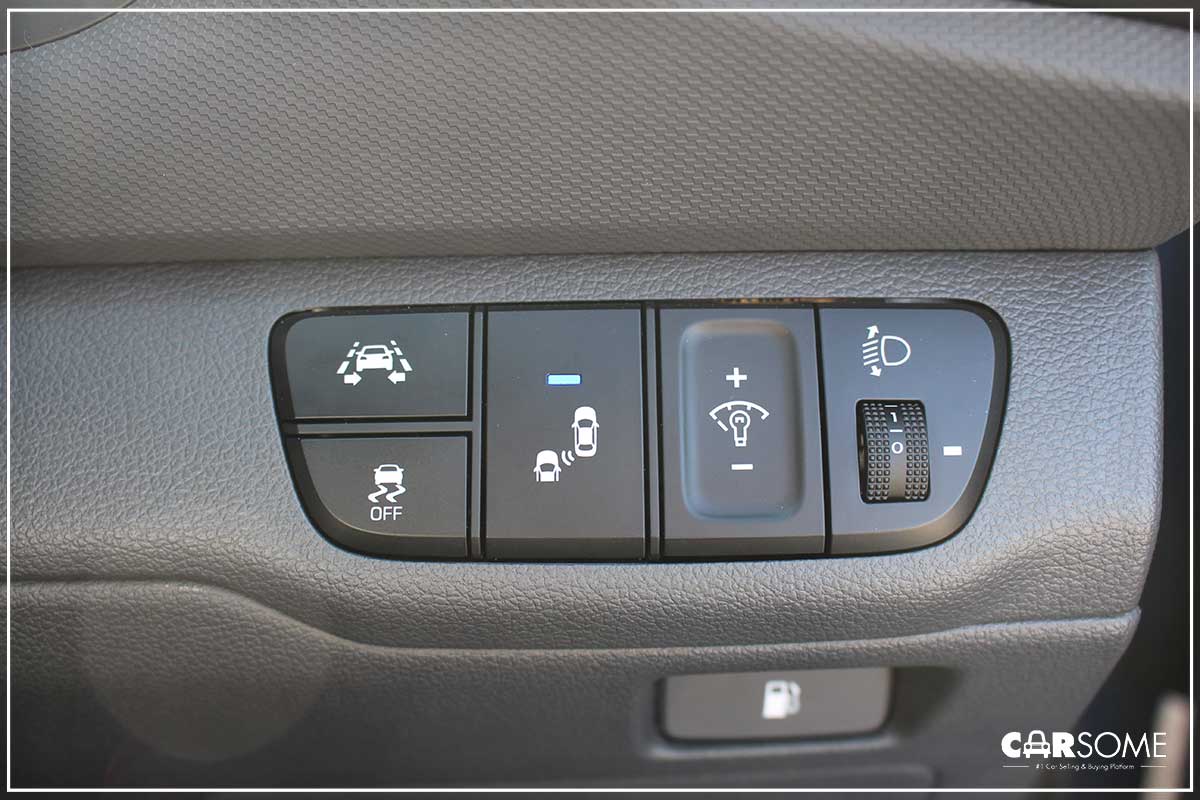 What makes the Ioniq Hybrid stand out from literally other vehicles in its class is the availability of active and passive safety features for the price point. Granted that the full on list of features are available on the higher HEV Plus variant, the features on offer are the Blind Spot Detection, Lane Keeping Assist and Departure Warning, Autonomous Emergency Braking, and Smart Cruise Control Systems, all of which provide additional safety on top the standard 7-Airbags, ABS, BA, HAC, ESC and VSM. 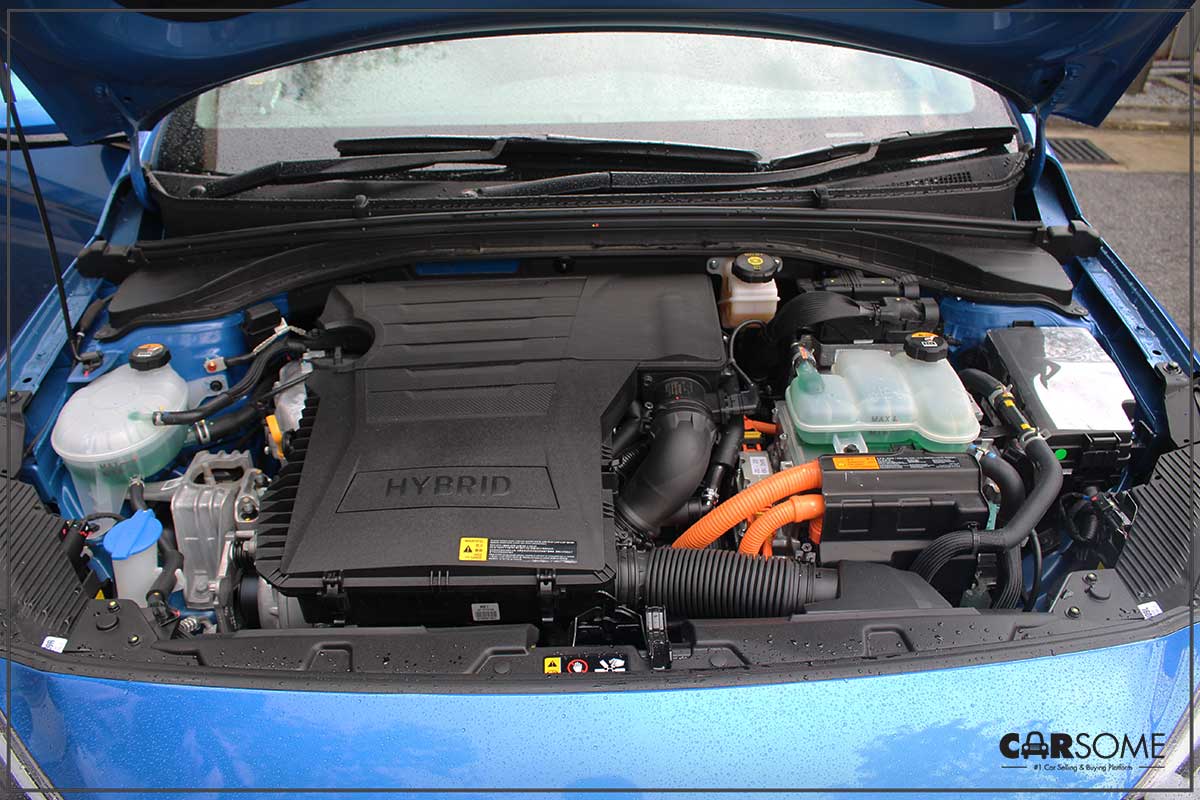 To start with figures, the Ioniq’s 1.6-litre GDI engine uses the Atkinson cycle and is rated at 104 hp with 147 Nm of torque and is then assisted with an additional electric motor with 43 hp and 170 Nm. Combined, the output produces 139 hp at 265 Nm. But best of all though, all this is mated to a six-speed dual-clutch transmission that’s silky smooth and as Hyundai’s reasoning, makes the Ioniq fun to drive.

We couldn’t agree more. In regular driving, the Ioniq does everything an Eco car is supposed to, with quite a bit of pedal travel to get it up to speed. From a standstill, you do realise the electric motor doing the get-go and is seamless enough that the integration with the combustion engine goes unnoticed. But push it harder and activate Sport mode, and the Ioniq surprisingly does the opposite.

Despite driving quite aggressively, the Ioniq is leaps above in handling for a Hybrid vehicle.

Instantly it changes the characteristics of the driving. The revs pull for longer and throttle becomes easier to push forward. What we expected with the inclusion of the DCT gearbox was a faster shift up and down, but the time it takes on driver input and shift engagement seemed a little slow. But when putting this into everyday usability, it makes more sense that Hyundai slowed things down to accommodate gearbox durability in the long run. What we wished for though, was the inclusion of paddle shifters. Stopping power is quite commendable with the brakes biting hard when needed, but does feel a little spongy. We believe it is due to the brake energy recuperation in the unit.

How does it ride? A lot stiffer than we expected, but not too much. Due to the placement of the Hybrid battery and the lengths the brand went through to make the Ioniq quick to drive, just note that it is leaps beyond what we expected a car of this class and purpose to perform at slaloms and corners. 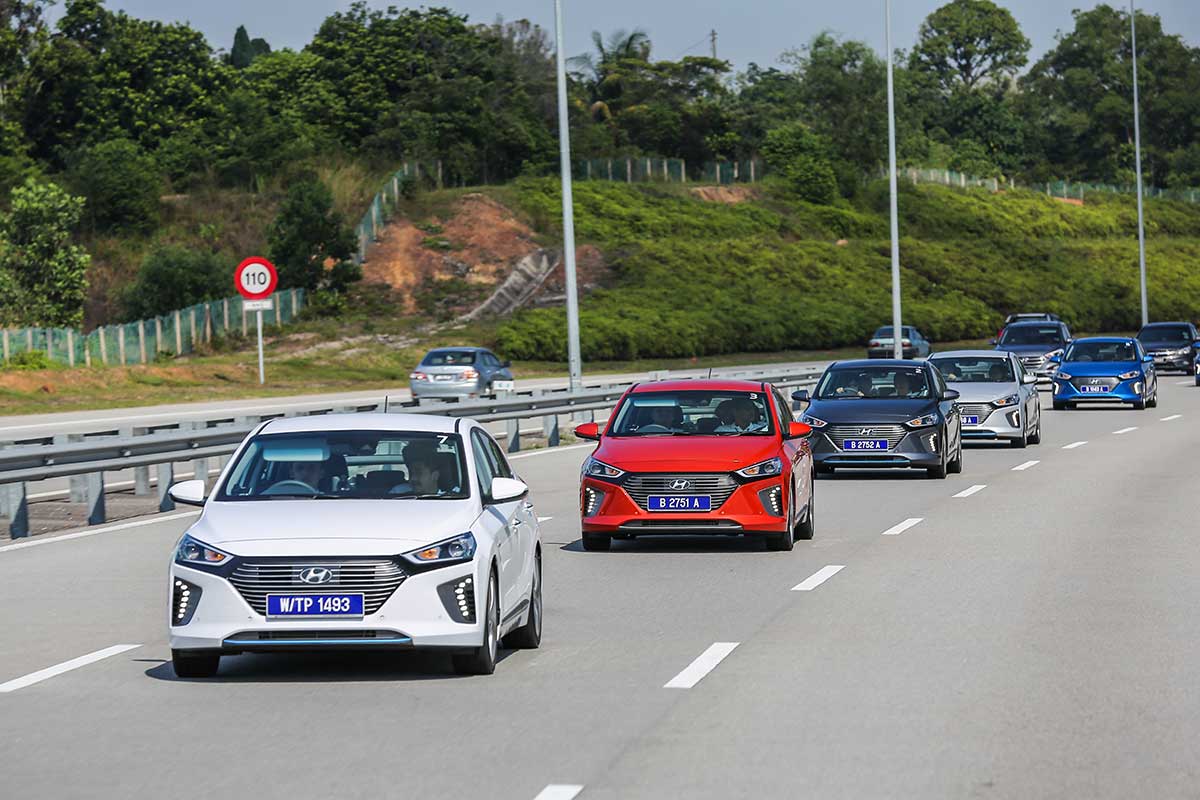 This car has stunned everyone in the industry and we truly didn’t expect this as well. Read reviews everywhere and you have journalists and those who have driven the Ioniq to say that it is one of the most interesting cars that Hyundai Malaysia has sold locally. Yes there may be thoughts that “it’s a hybrid” or “it has a DCT gearbox”. But rest assured that the company has gone to lengths to test the transmission in various road conditions globally including – high speed at the German Autobahn, heavy traffic in Seoul, long distance cruising in the USA, high temperatures in the Middle East, cold conditions in Eastern Europe and high humidity and rough roads in China.

What do we really think? With the HEV priced at RM100,328 and the HEV Plus at RM110,828 without insurance, the Ioniq Hybrid is a no brainer for a ridiculously feature packed vehicle at a price point that just smashes everything else.