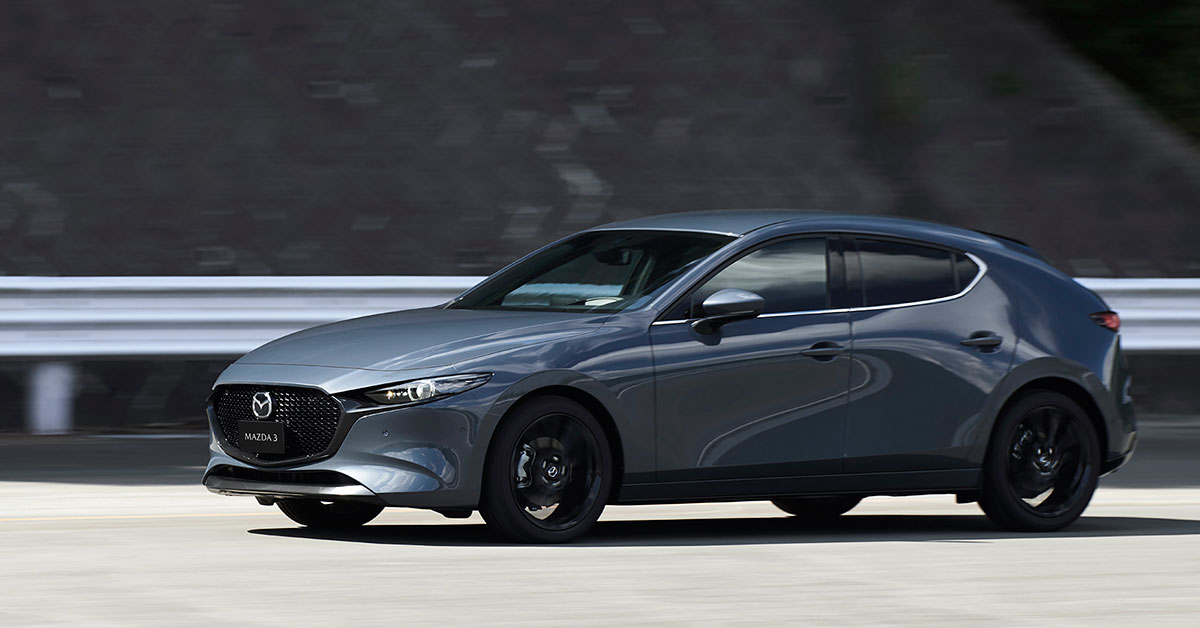 Unveiled just last week at the Los Angeles Auto Show, the all-new Mazda 3 is a new chapter for the Japanese brand in terms of mechanics, design and appeal. How is the brand moving forward? Read on to find out. 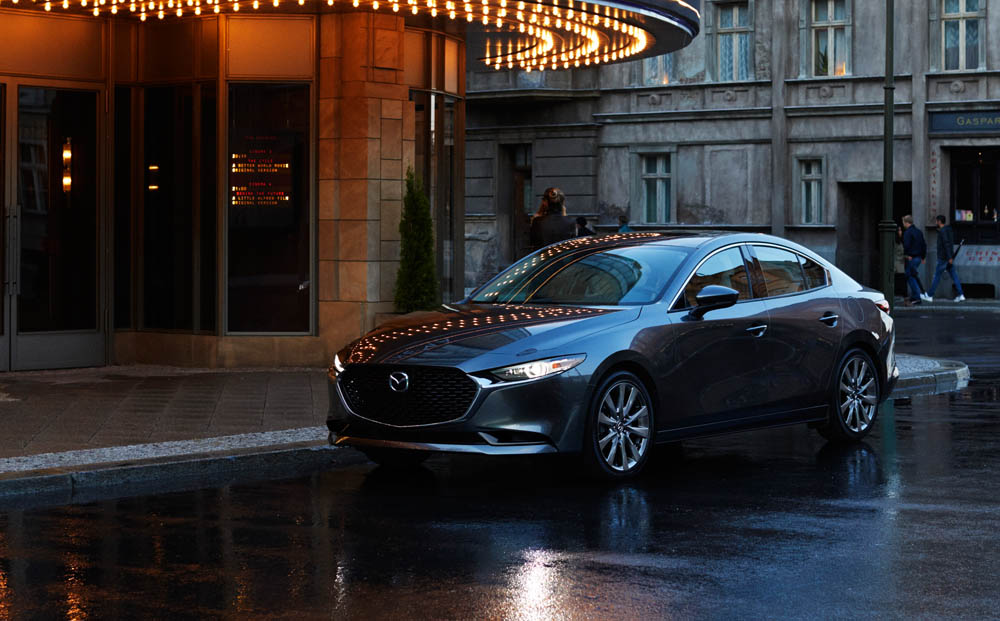 Mazda’s headlining ‘Kodo – Soul of Motion’ design was first introduced in the 2010 CX-5 and in the Mazda 6 two years later. It has essentially provided Mazda with the signature look and feel that continues until now. With the all-new 3, Mazda has evolved the Kodo design to express a new form of elegance. The development team took to designing the Mazda 3 hatchback and sedan with its own unique appeal, distinctly different that it could even represent separate models.

For the hatchback, the design concept was on creating a solid mass with a seductive appeal that conveys a fresh expression of hatchback styling. Viewed from the rear, the cabin and body come together to appear as a single solid mass. The sedan on the other hand was made to be sleek and elegant, bringing the hood, cabin and trunk as three distinct elements. The result in Mazda’s expression is a “refined, mature expression of elegance”. 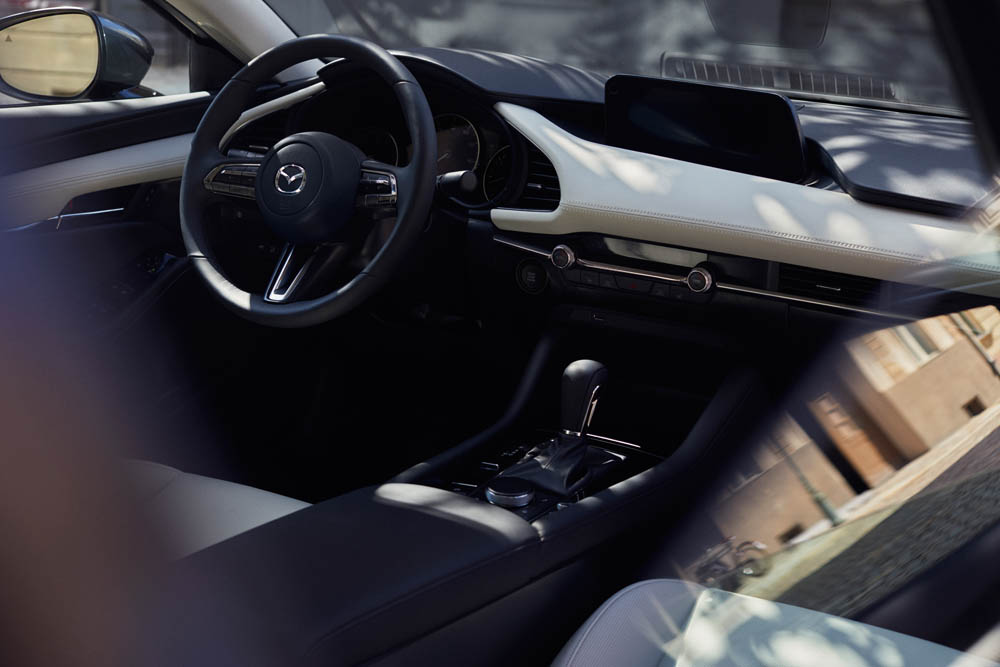 On the inside, the cockpit has been laid out in perfect horizontal symmetry with the driver in the center. The further-evolved Kodo design here was also to incorporate an interior that showcases the “less is more” philosophy. For example, the climate-control panel and passenger-side louvers are integrated into the left-right axis that follows the line of the instrument panel. This provides a clean and simple design. 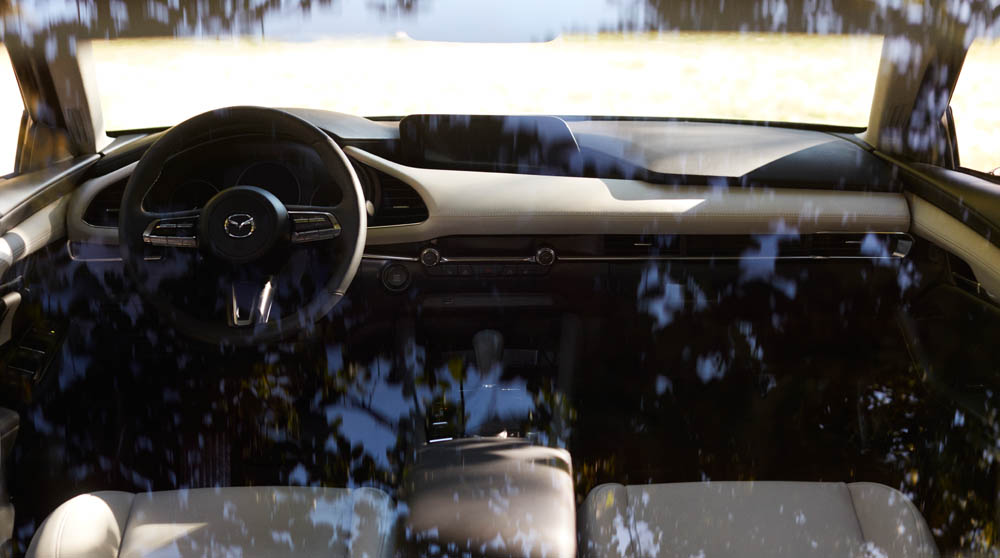 Mazda says that the goal in human-centric design was to provide all drivers with confidence, ease of operation and driving concentration. When it came to driving position, the gear shift lever was moved forward and positioned higher on both the automatic and manual transmission variants. The commander was also moved forward, cupholders repositioned in front of the shift lever and the center armrest lengthened. The new console layout has significantly improved operating stability, ease and comfort. 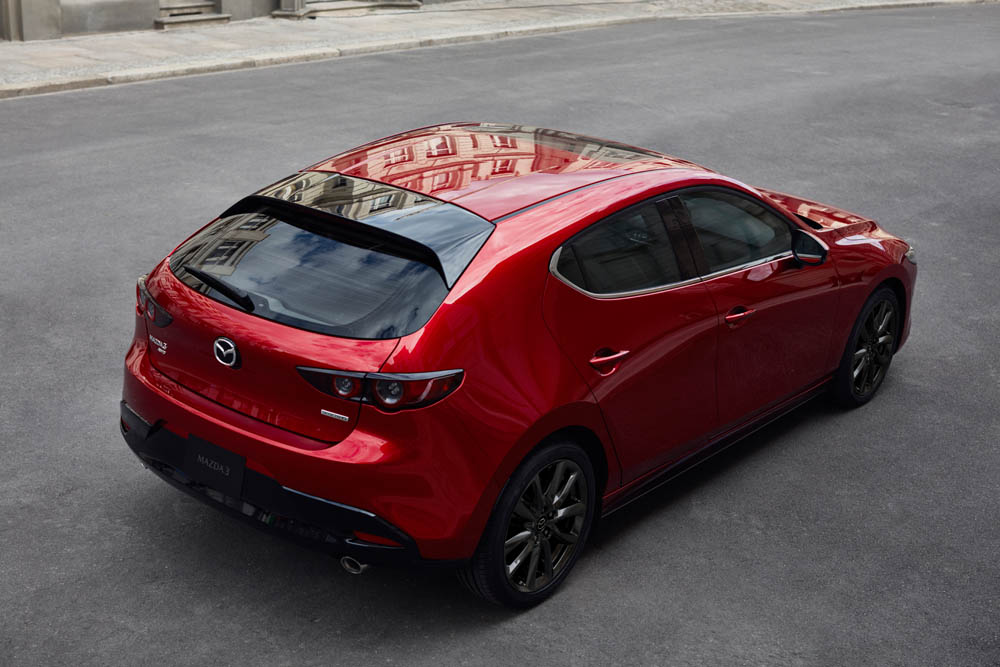 The detail of the A-pillar design and shape was optimised to minimise obstruction angle and blind spots. Development engineers calculated the degree of neck and eye movement in relations to the pillar shape as to ensure that the driver has continuous view of the things ahead and potential obstacles to the right or left. (While this reflects much on the front visibility, Mazda has not mentioned about rear visibility on the all-new hatchback. Based on the look, it seems that the C pillars are significant in shape and could pose as an issue in visibility.)

The windshield wiper was also redesigned and is now housed beneath the hood and incorporates the washer nozzles within the wiper arms so that the spray can be wiped away immediately after application and not interfere with driver visibility. 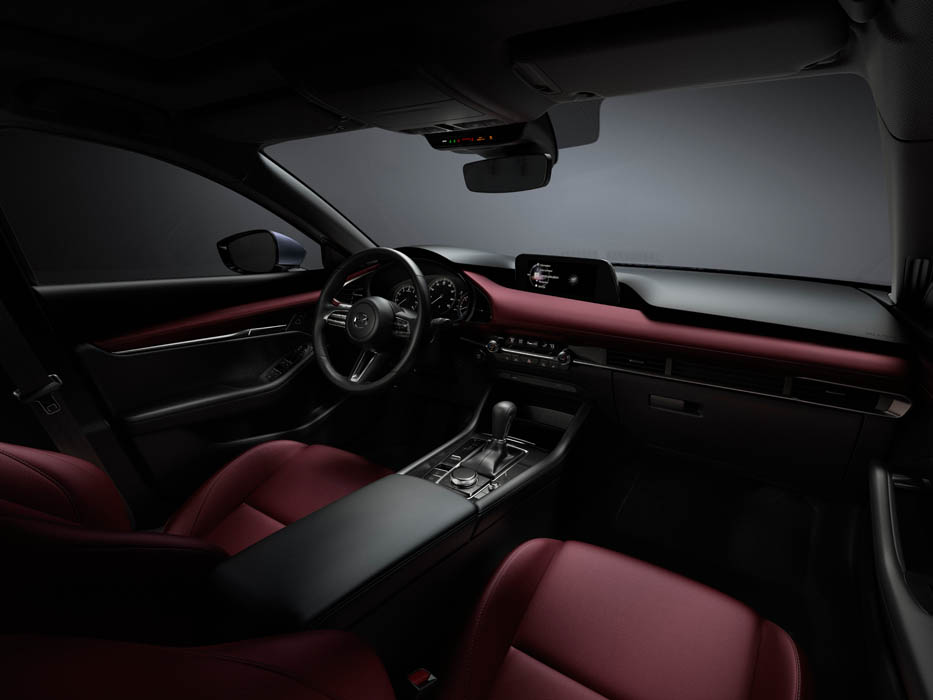 To improve insulation, the new 3 is the first to apply a “two-wall” structure that leaves space between the body and carpeting on the floor. By taking into consideration the carpet and body panel as two walls, the design was to match the characteristics of the fibre material attached to the carpet to increase efficiency without increasing weight. Measures to deal with road noise included sound-absorbing functionality added to the headliner and floor mats to suppress high-frequency noise. On the outside, the use of tyres with optimised vertical spring action and increased rigidity at points help prevent spread of certain vibrations to the cabin. 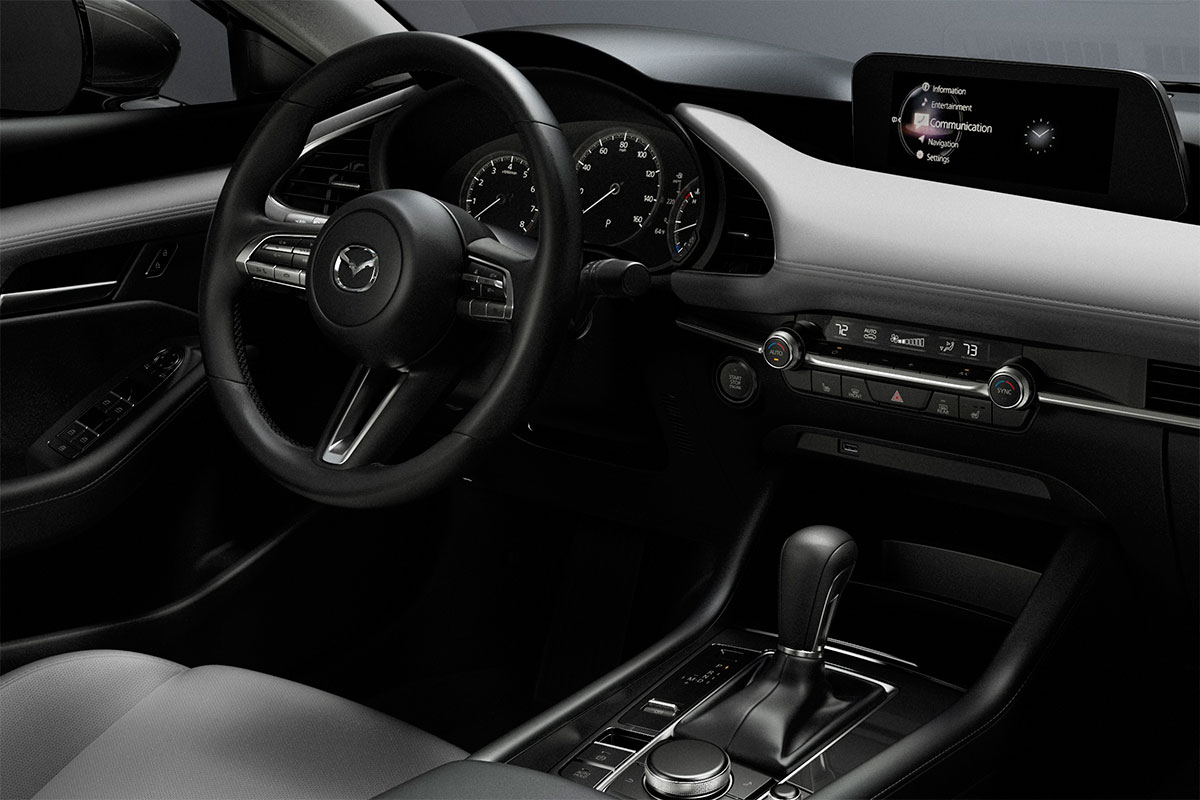 Mazda has also taken to redesign the Active Driving Display, meters and center display to present information simpler with unified fonts to create a consistent and pleasing look. The new 8.8-inch center display is operated with the new commander control and features intuitive guidance for easier operation. 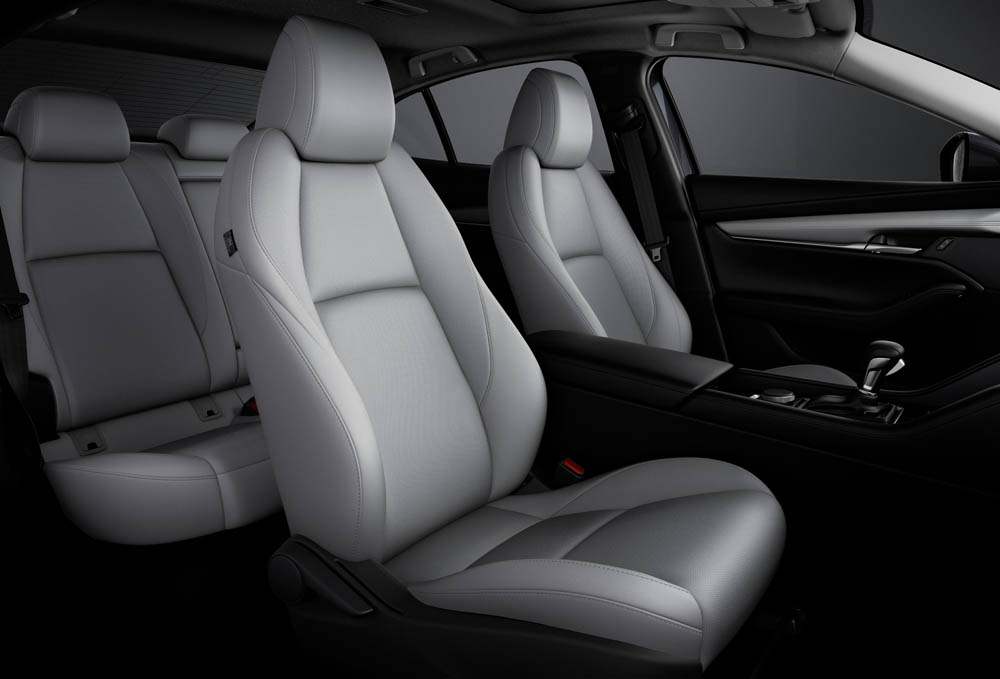 Studies were conducted to understand how sounds are transmitted through the car’s cabin. This has led to placing the bass speakers in the corners where the sound is amplified. Furthermore, to prevent reflected sounds interfering with the tonal quality of mid to high-frequency sounds, speakers have been positioned on the left and right sail garnish and upper sections of the door to direct sound towards the occupant’s ears. The standard audio system is an 8-speaker system while the 12-speaker Bose sound system improves on speaker positioning and custom tuning for more powerful bass and higher audio quality. 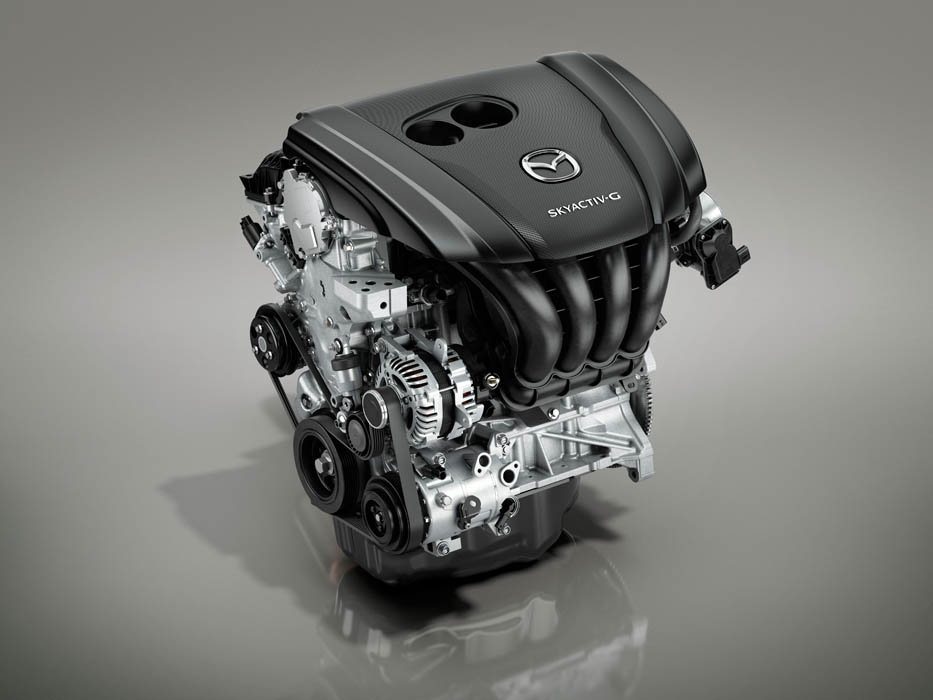 The new Mazda 3 will feature three petrol Skyactiv-G engines in 1.5-, 2.0-, and 2.5-litre versions that have optimised intake ports and piston shape, split fuel injection and a coolant control valve. All these come together to provide performance, fuel economy and more environmental friendly.

The 3 will also be available with the Skyactiv-D 1.8 diesel with ultra-high response multi-hole piezo injectors that allows the engine for high-pressure and precise controlled multi-stage injection for better fuel economy, reduced exhaust gasses, and is also quieter and smoother. 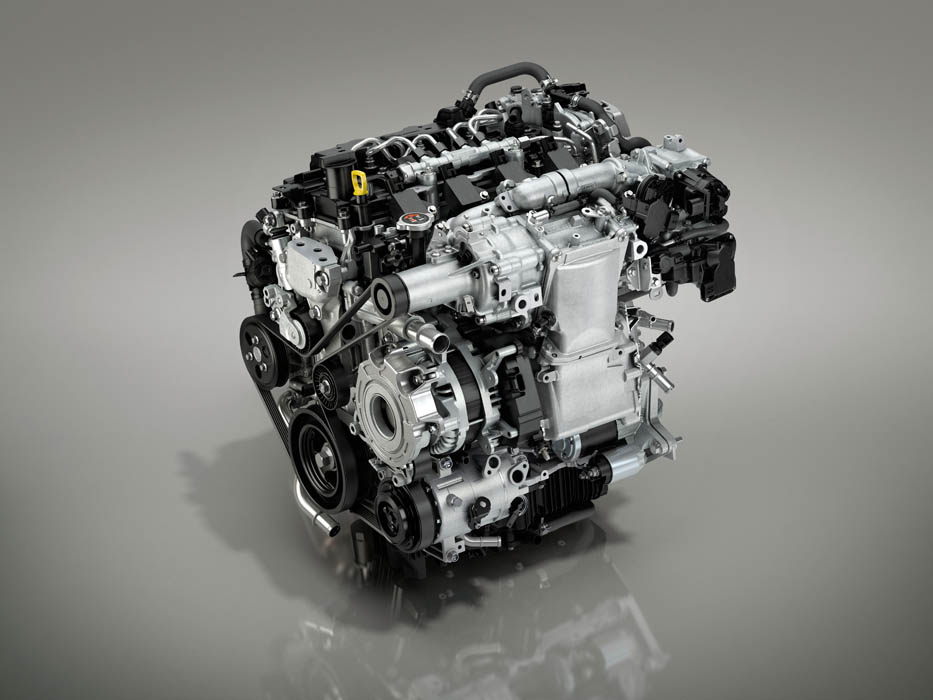 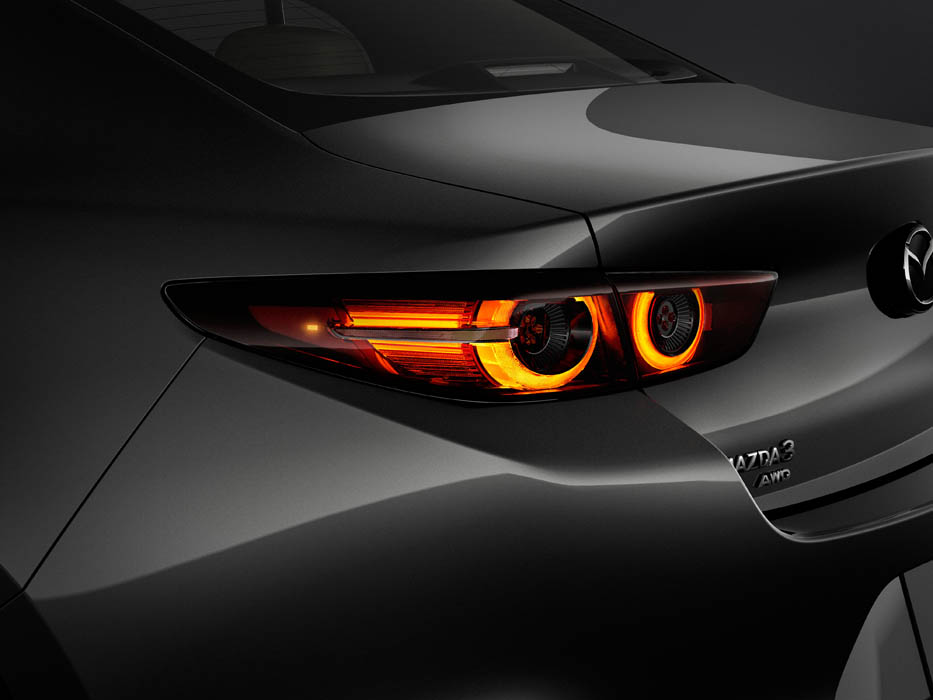 But the highlight here has to be the Skyactiv-X engine. As the first production car to offer the new generation of petrol engines, Skyactiv-X combines the advantages of both petrol and diesel engines. The innovative Spark-Controlled Compression Ignition compresses the fuel-air mix at a higher compression ratio. This together with the spark to ignite the dense fuel-air mix under pressure, allows it to burn faster and more completely than in conventional engines. 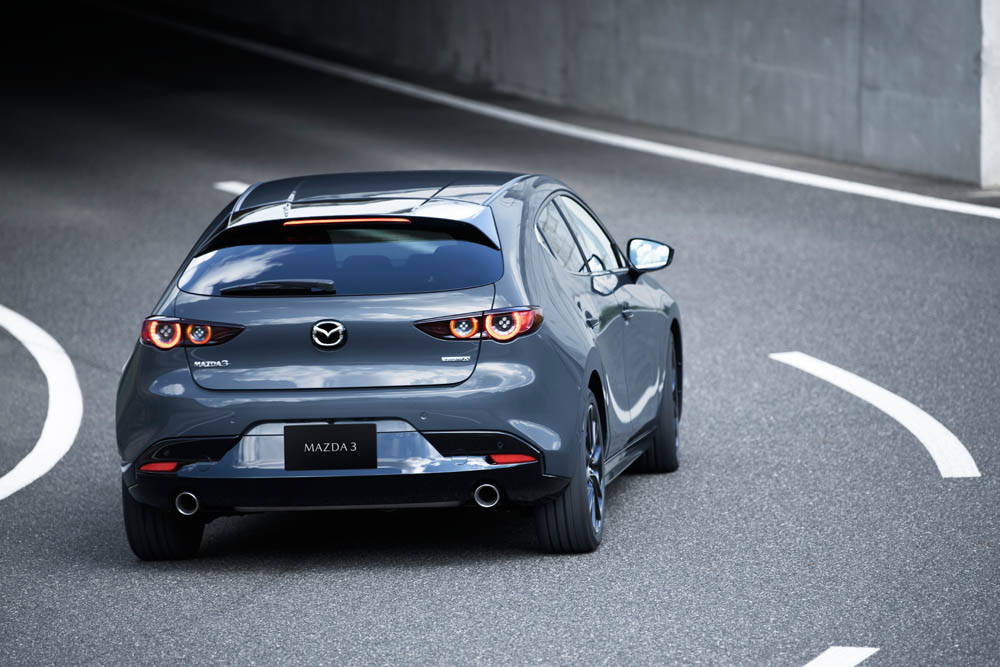 The results for Skyactiv-X are phenomenal, providing 10 to 30 per cent more torque than the current Skyactiv-G engines, better fuel efficiency than the Skyactiv-D, and a power increase of 10 per cent. 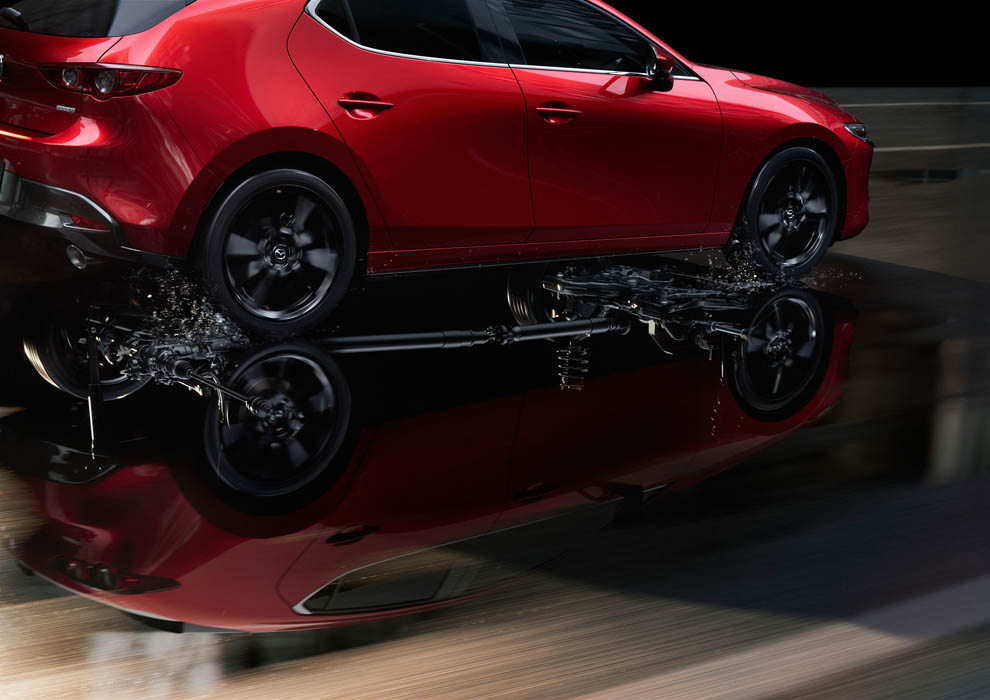 The new sedan and hatchback will also come with Mazda’s evolved i-Activ AWD system and G-Vectoring Control Plus. GVC Plus adds direct yaw moment control via the brakes to better handle emergency avoidance manoeuvres and controllability in situations like high speed lane changes and slippery roads.

To better understand what G-Vectoring Control does, watch this. 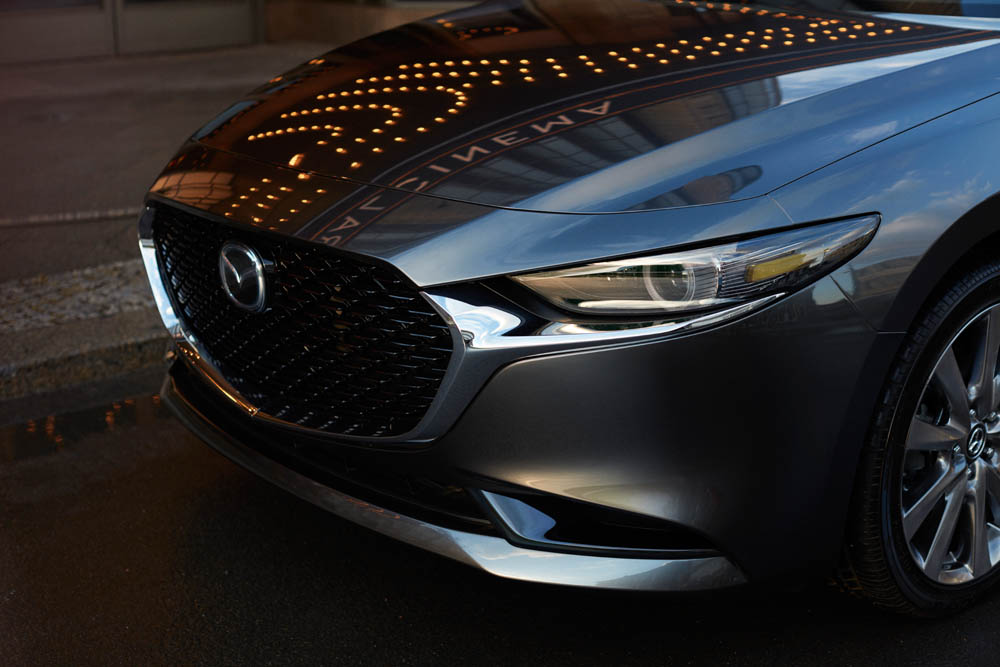 The i-Activsense has been improved and includes a newly developed Driver Monitoring system. In the cabin, the infrared camera and infrared LED observes the driver’s condition – monitoring how wide the eyelids are at any given time, number of blinks, angle of mouth and face in order to determine the level of drowsiness, as well as driver’s line of sight and eye movement to determine if the driver is being inattentive. Should the system judges the situation becomes dangerous, an audible alert will sound as well as the Smart Brake Support (SBS). 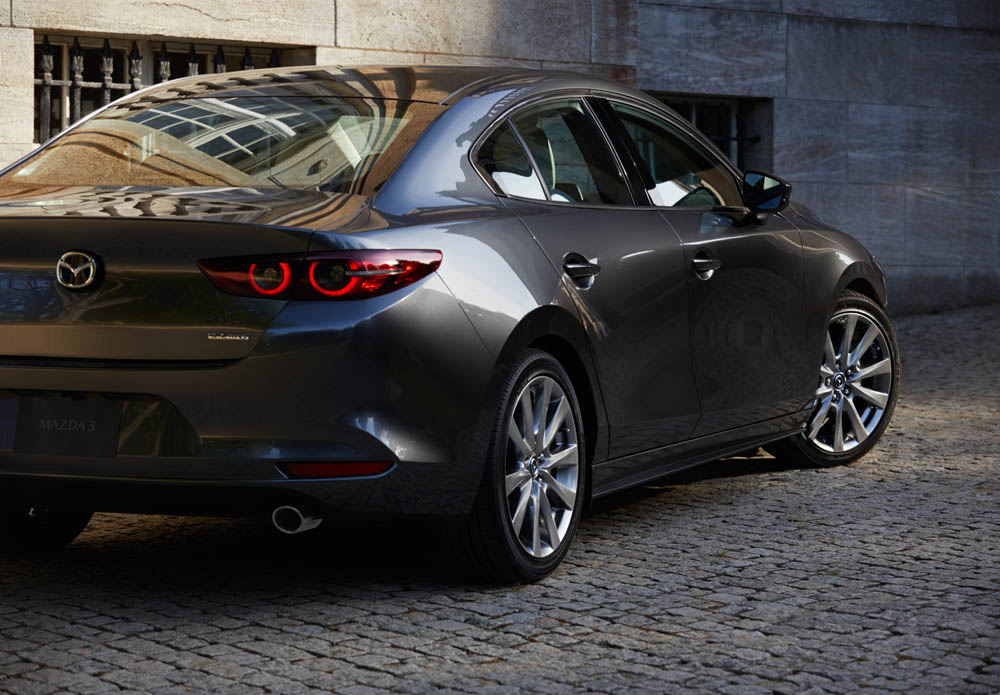 For Passive Safety, the increase of ultra-high-tensile steel ratio has been increased tenfold. A new knee airbag for the driver’s seat and hood inner structure takes to improve impacts to a pedestrian in contact.

To have a sense of what the all-new Mazda 3 will be like, click here for our review of the 2017 Mazda 3 GVC!

Sell your car through Carsome when you’re ready to get that Mazda 3!