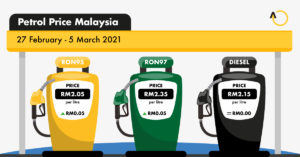 Want to know the petrol price for this week? Let’s get you up to speed! Curious about how fuel prices are calculated in Malaysia? The formula used to calculate the price of fuel is called the Automatic Pricing Mechanism (APM) formula- so prices are updated weekly based on this formula. Bookmark this page for weekly up-to-date-prices and information!

We’ve also compiled some of the frequently asked questions about petrol, its differences and its prices.

1. Should I wait for the changes in petrol price before filling my car up?

While this might help you save a few bucks every other week when the price goes down, the oil price in Malaysia is determined by the global market which makes it difficult to gage the cost in the long run.

In Malaysia, you can find two different types of petrol used in cars, RON 95 and RON 97. People usually think RON has something to do with the quality of the petrol which translates into the different prices between them both. But RON is just an abbreviation of Research Octane Number (RON) which signifies the branches of the hydrocarbons. 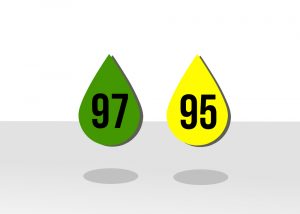 4. Which RON should I use for my car?

Every car is manufactured with a minimum compression ratio, and the best way to know which fuel type best suits your car is to check it up with your service center. Generally, fuels with a higher number of octane (eg: RON97) are used in high-compression, high performance engines. Filling a vehicle with a lower RON than the one specified by the car manufacturer may lead to pre-ignition, a scenario that could ruin the car engine in the long-run or even result in an explosion.

You can still fill your RON97 car with RON95 and your car will still run. But, it will not run effectively, and cause a whole lot of damage to the engine in the long run which translates to more expenditure to repair it up.

Using RON97 in a RON95 car does not bring any harm to your car but it might end up hurting your wallet as RON97 is generally more expensive. You would not gain anything in terms of additional performance as your car’s engine is made for RON95. RON97 is used for higher compression engines and recommended for cars of 2,500cc and above.

7. What is the difference between Petrol and Diesel Petrol?

These both are made from the same base, mineral oil. The only difference is the way they are refined. Diesel petrol is said to be easier in refining and it also produces more energy during combustion.

8. What is the difference between Petrol and Diesel Engines?

Other than the obvious difference which is the petrol price, the one that sets these two apart is the way combustion happens. A petrol engine mixes fuel with air and gets compressed by pistons and this compressed mixture is ignited by the spark plugs to move the pistons.

Diesel engines on the other hand compresses the air before adding fuel. High compression of air creates high temperature and heat that is used to combust the diesel fuel when it is added, so no spark plugs are needed to ignite the combustion. 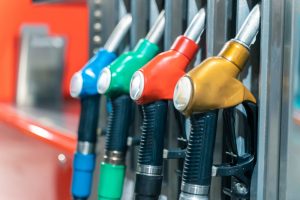 Between these three types of fuel, none is more superior than the other. It all depends on the type of car that you drive and the right fuel for your car.