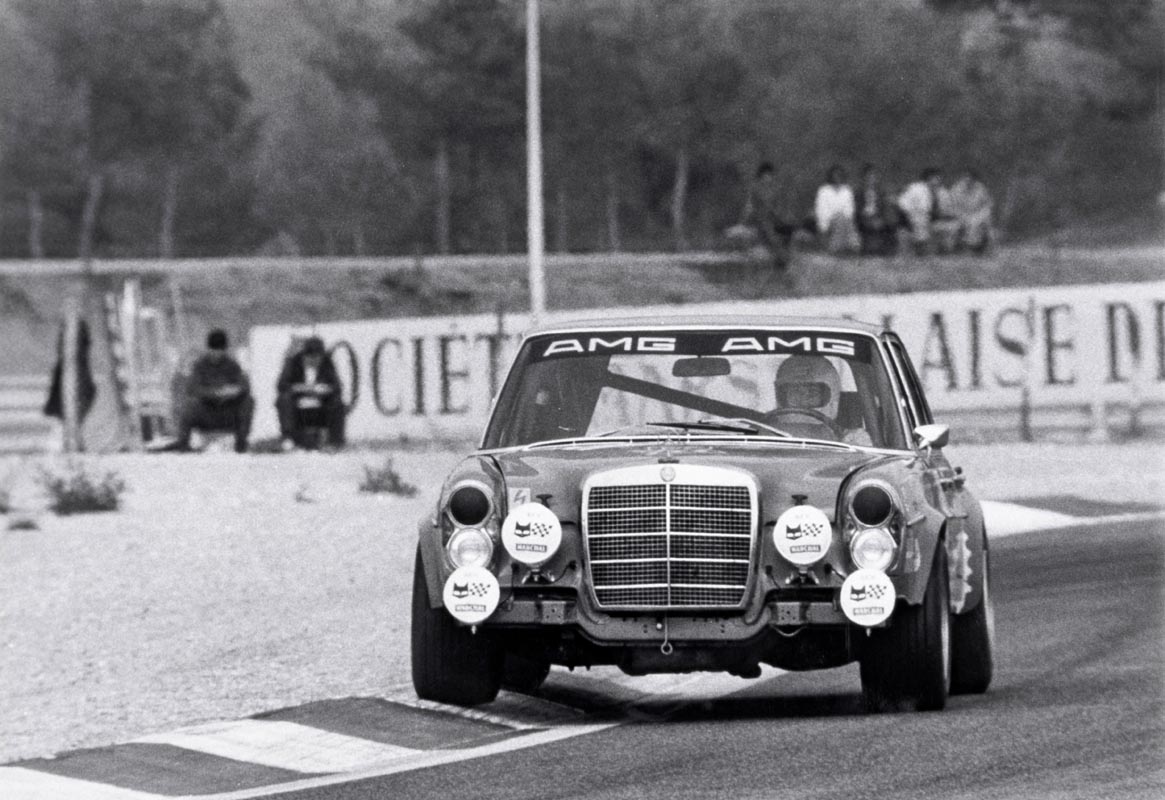 The AMG name is easily one of the most recognisable letters in the automotive world that’s also distinctly tied to Mercedes-Benz. But apart from knowing that AMG’s are more powerful versions of standard Mercedes’, how did it start, and how much of AMG is part of its history? 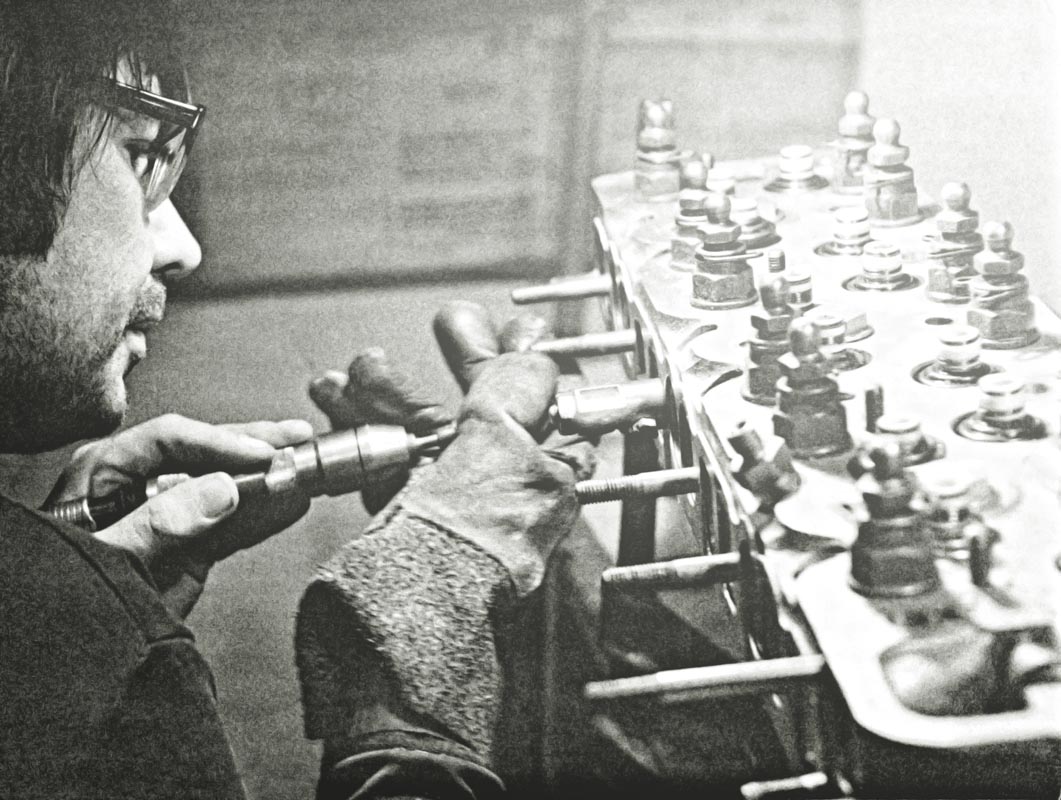 In a brief history, AMG was started by two engineers – Hans Werner Aufrecht and Erhard Melcher who at the time was working in the Development Department at Daimler-Benz; shared an interest in motorsports. Unfortunately, the company discontinued all racing activities, and Aufrecht and Melcher wanting to continue on with their interest, founded AMG after their names and the location of the garage where they first worked, in Großaspach (pronounced Grossaspach) in 1967. 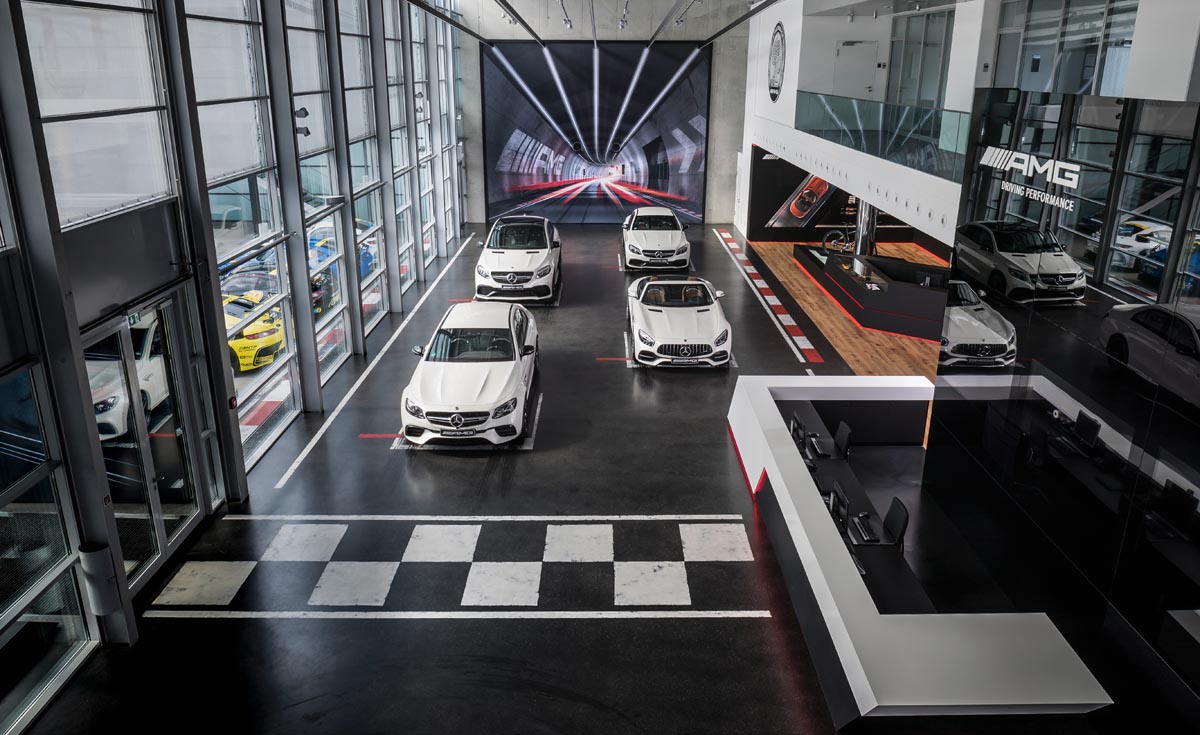 Through the tinkering of engines for performance, winning races, and creating history, the popularity of AMG spread to tuned cars even on the road; with the badge quickly becoming a sensation. With demand steadily rising, they soon moved to its current home in Affalterbach in 1976. 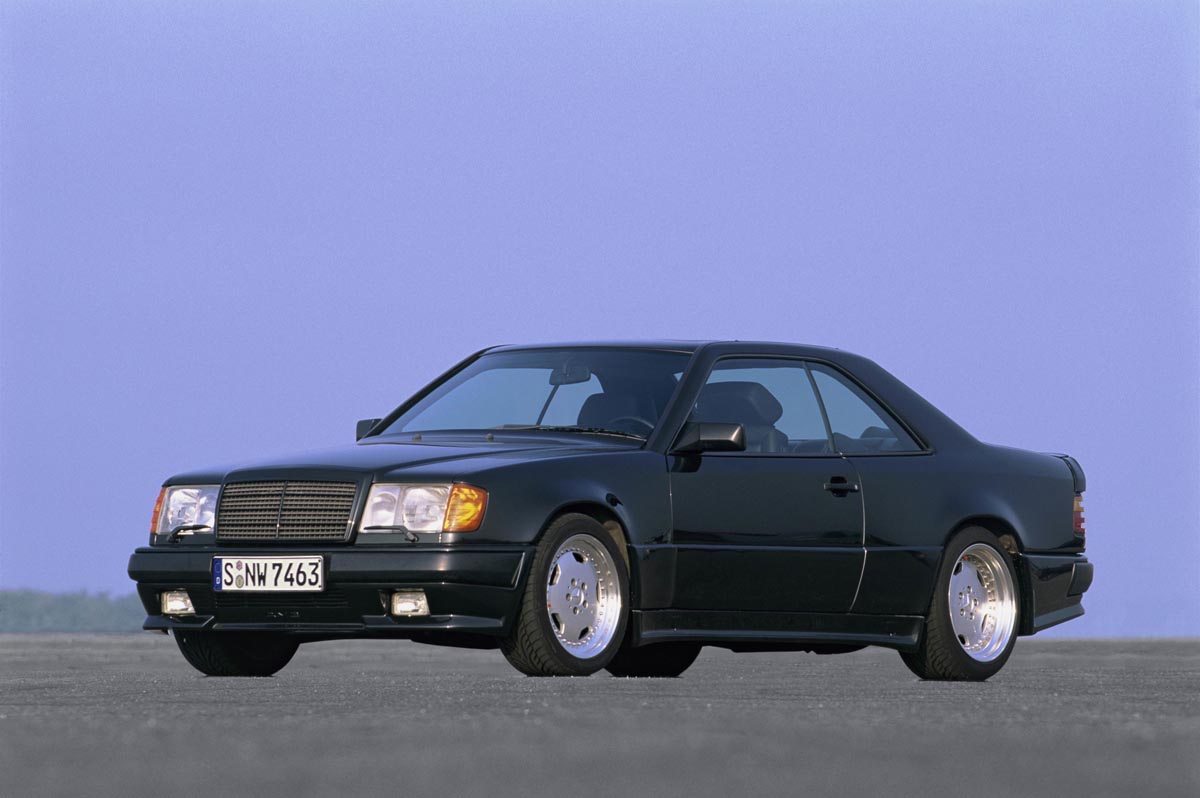 It was at Affalterbach in 1986 that global recognition was brought into attention – the brand had developed a 5.0-litre V8 engine in an E-Class coupe, better known as “The Hammer”. Years of close cooperation followed, and with high demand and a greenlight to develop AMG versions of Mercedes’ road cars, the badge today is ever popular with the three-pointed star. 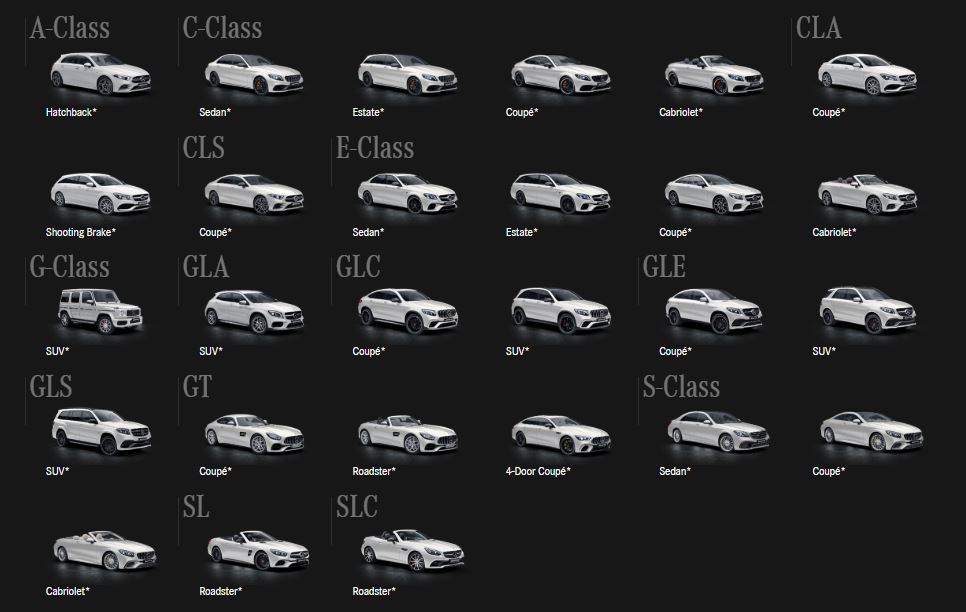 Don’t forget that this list doesn’t include all engine types. Thats a lot of AMGs.

Today, AMG badged Mercedes’ have grown in variety and numbers. In fact, in its current line-up, despite having six distinct badge numbers 35, 43, 45, 53, 63 and 65, there are further variants of the engines within the same number. While we won’t go deep into the range, the engine in the 45 AMGs are considered as the customer’s entry point into the world of performance Mercedes-Benz (This has been overtaken by the new entry 35 model in the new A-Class; with plans to improve and uprate the current 45 versions). 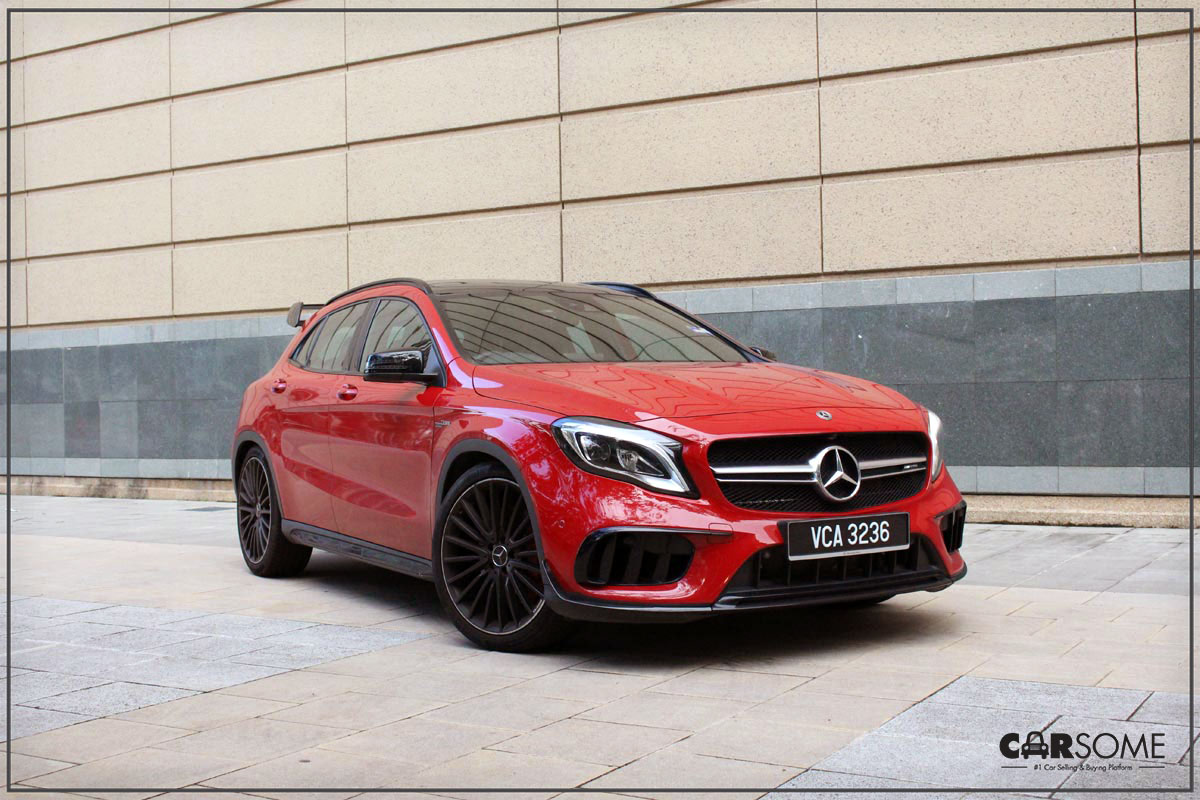 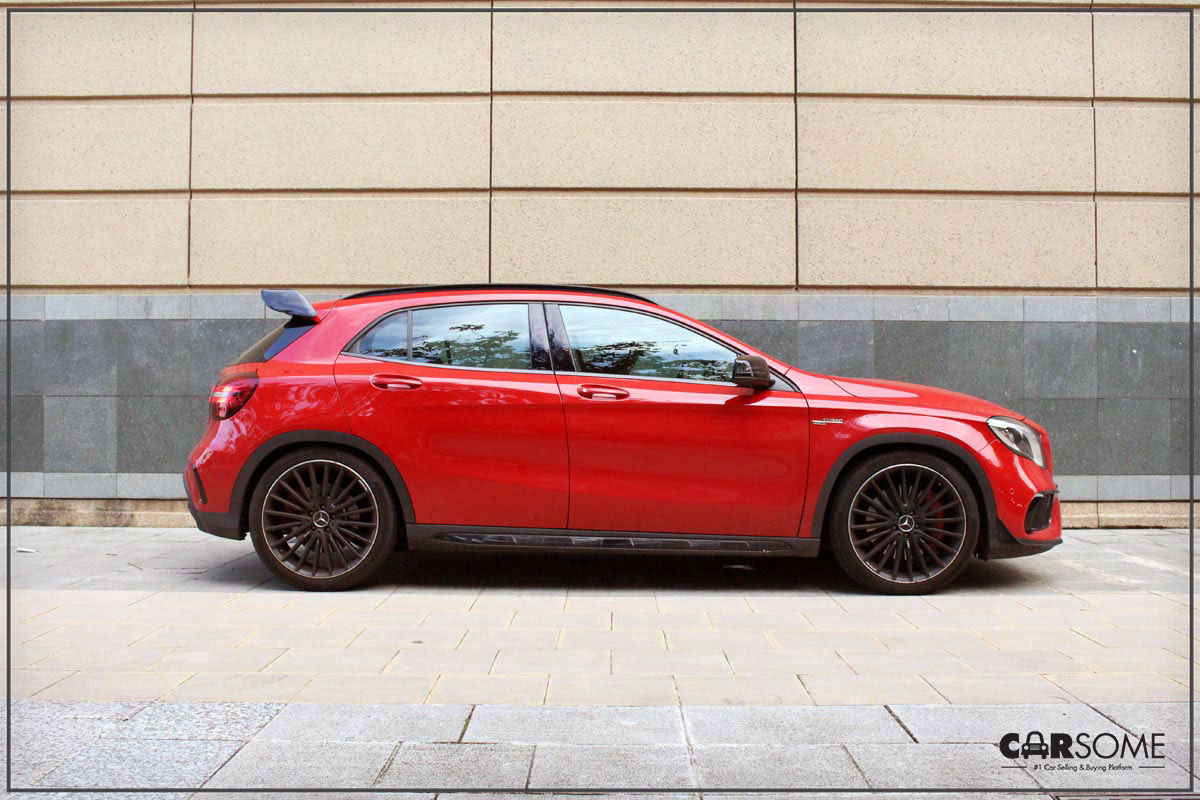 So with the small history lesson aside, we’ve arrived at the Mercedes-AMG GLA 45. At first thought, it’ll be natural to think that the GLA 45 would end up to be a strange AMG choice, but after spending some time with it, we think this is the entry AMG to get. However, we do know the facelift was launched in 2017 and we are now in 2019, so let us explain. 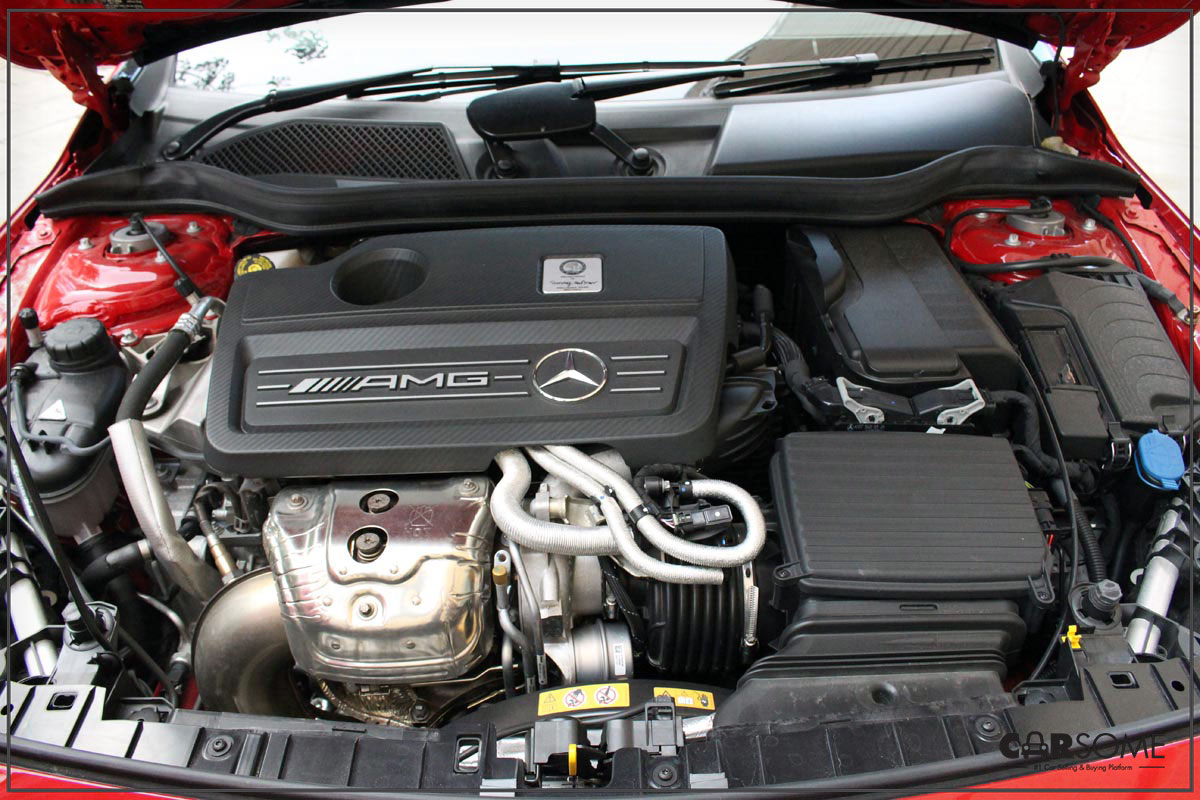 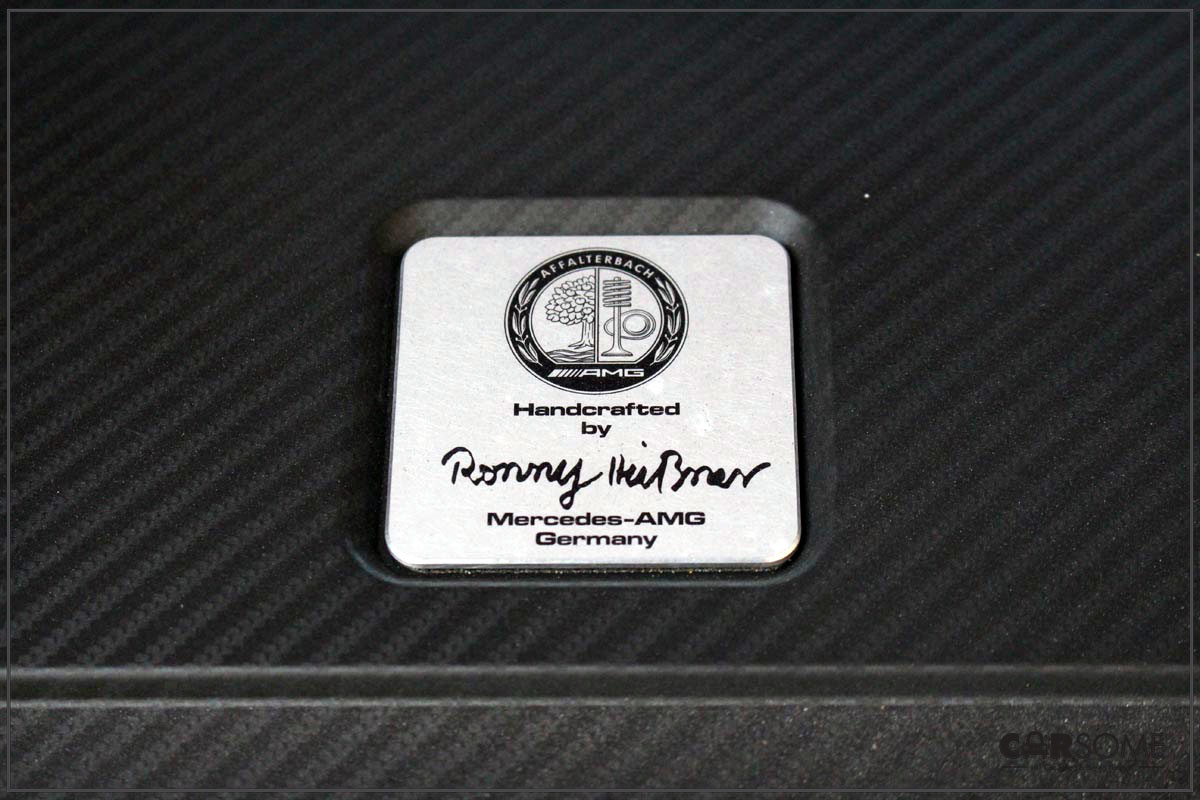 Following the brand’s one man, one engine, this one was handbuilt by Ronny Heibner.

The AMG in focus here is the facelift AMG GLA 45 4Matic, which underneath has a 2.0-litre turbo that outputs 375 hp and 475 Nm of torque mated to a 7-speed AMG Speedshift Dual-Clutch transmission. Power is driven to all wheels through the 4Matic system with a century sprint time stated at 4.4-seconds. It stands 15 mm lower than the standard GLA and has all the bells in the suspensions to set it apart from the vanilla sibling. 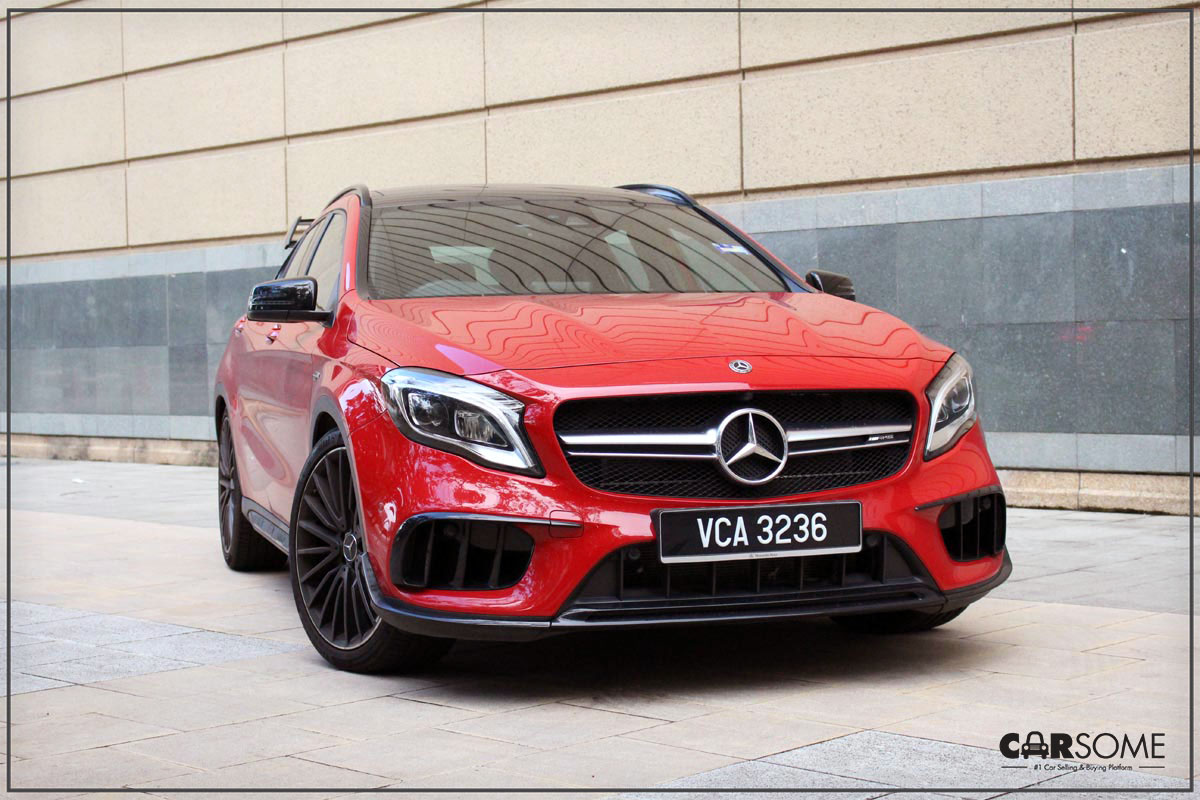 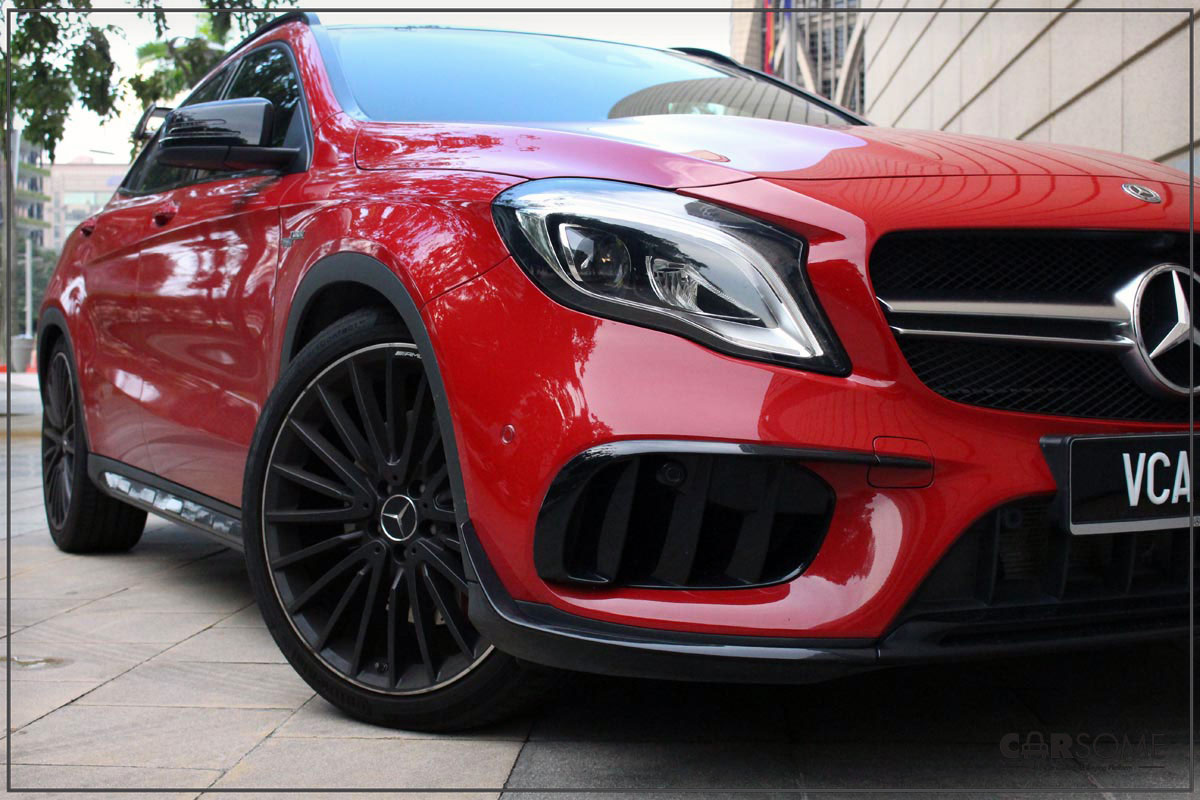 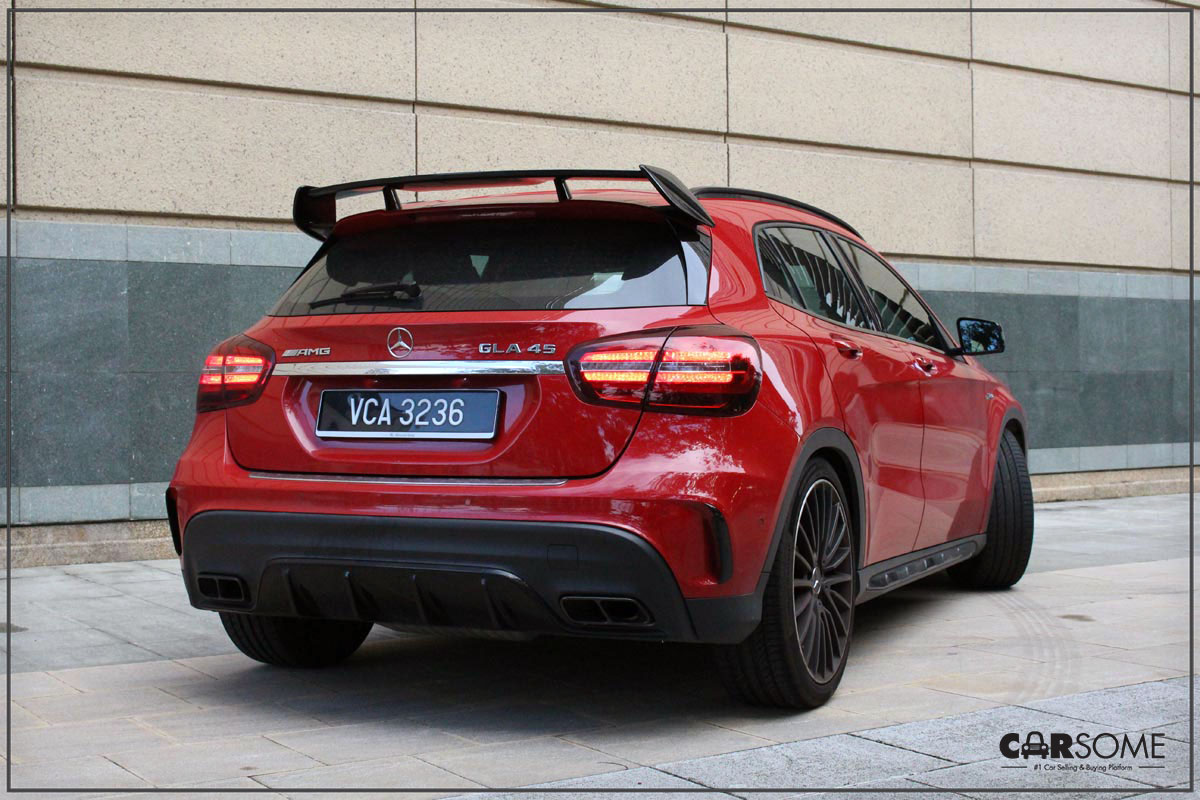 Aesthetically, this facelifted GLA 45 now comes with high performance LED headlamps with a distinct DRL strip (opposed to chiclets before), bodykit with new air intake grilles with a front splitter which helps in aerodynamics. 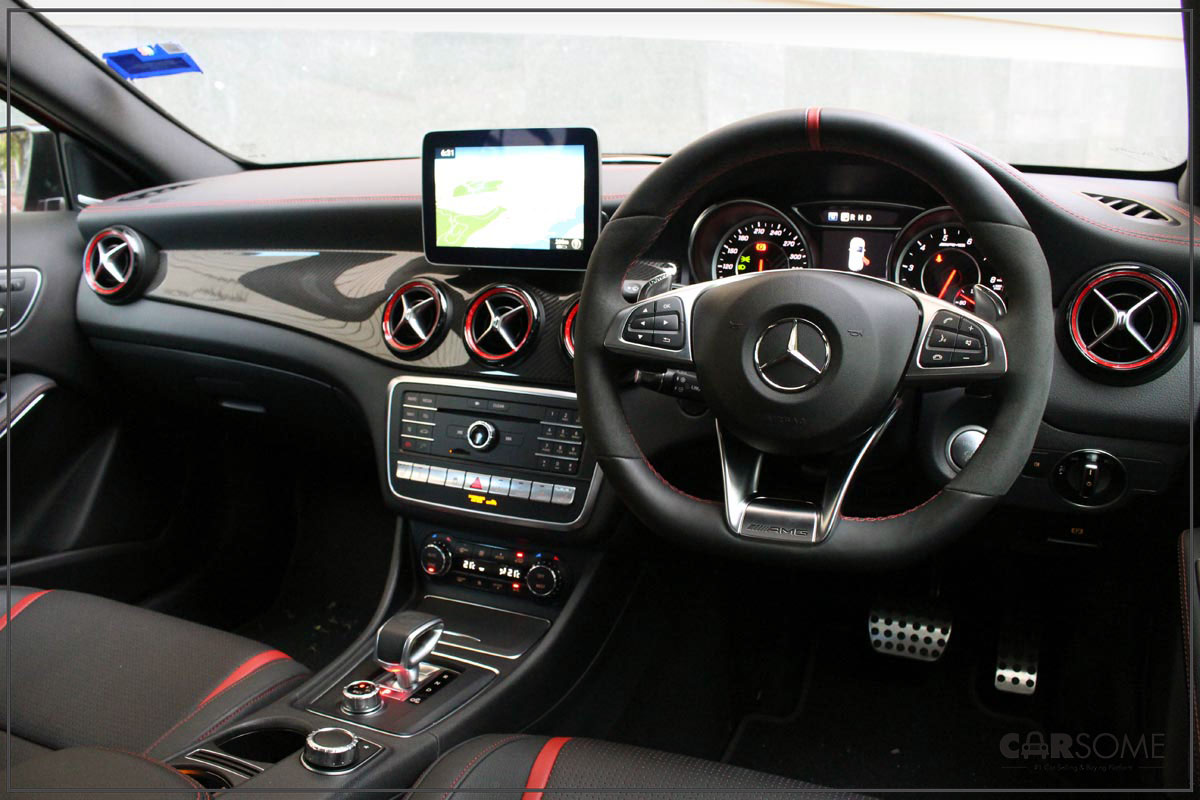 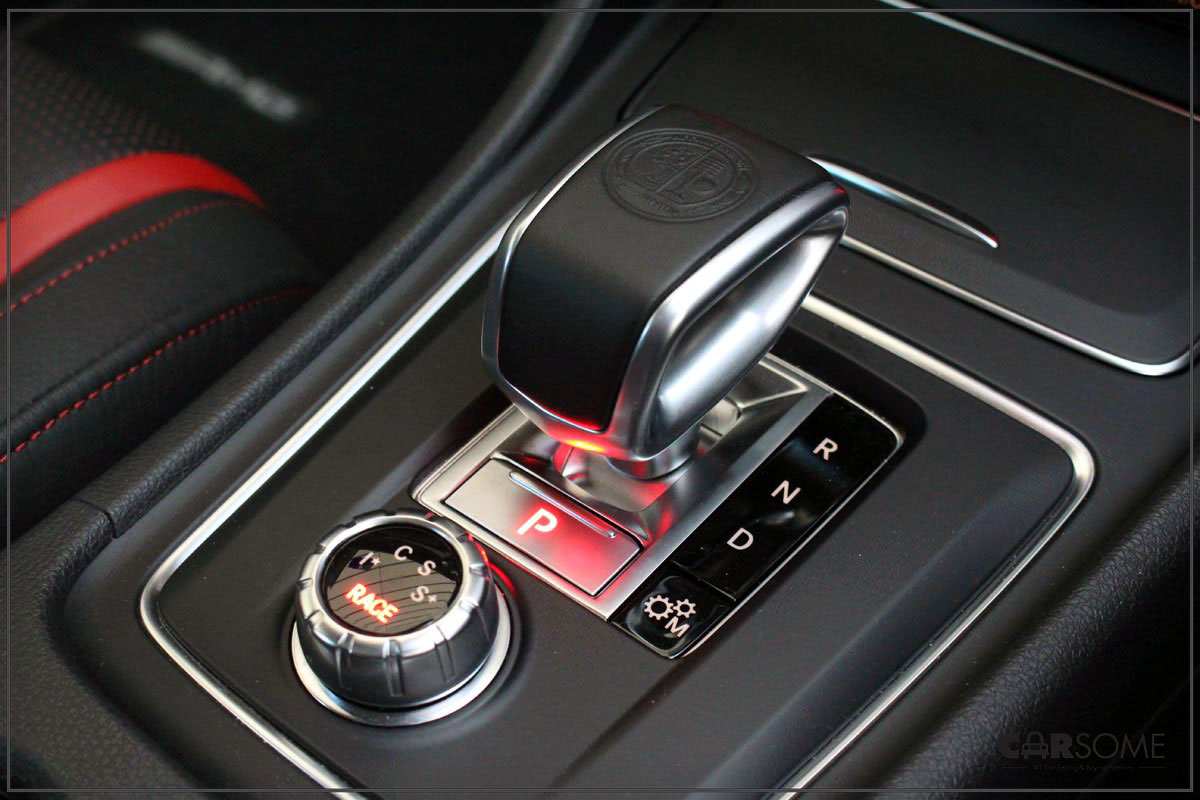 Inside the cabin does feel a little dated, and follows on from the same layout as seen in the 2013-2014 A-Class and GLA when it was first introduced. Of course the AMG treatment here does distinguish it from the other GLAs with the AMG Performance steering wheel, Recaro bucket seats with adjustable side and thigh bolsters, centre console gear shifter, the floating 8-inch display, the customary red accents throughout the cabin and seatbelts, on top of many others. Most of all, how does it drive? 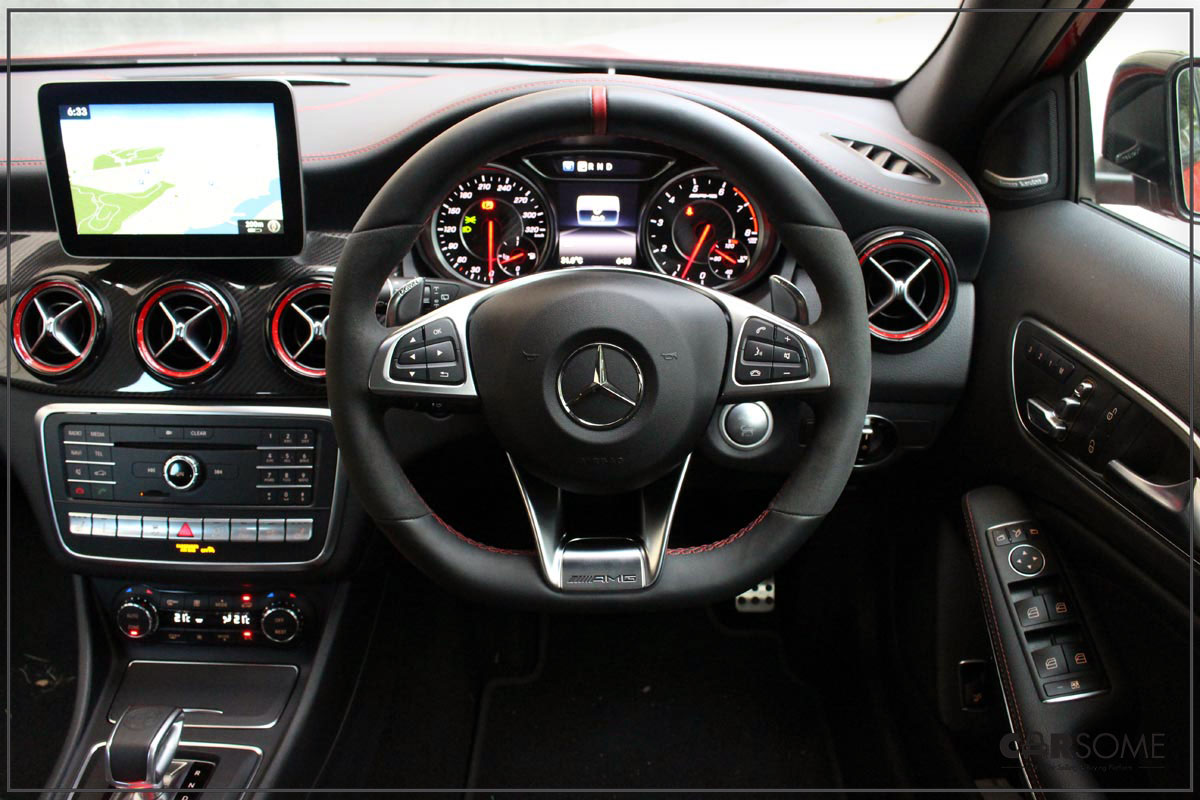 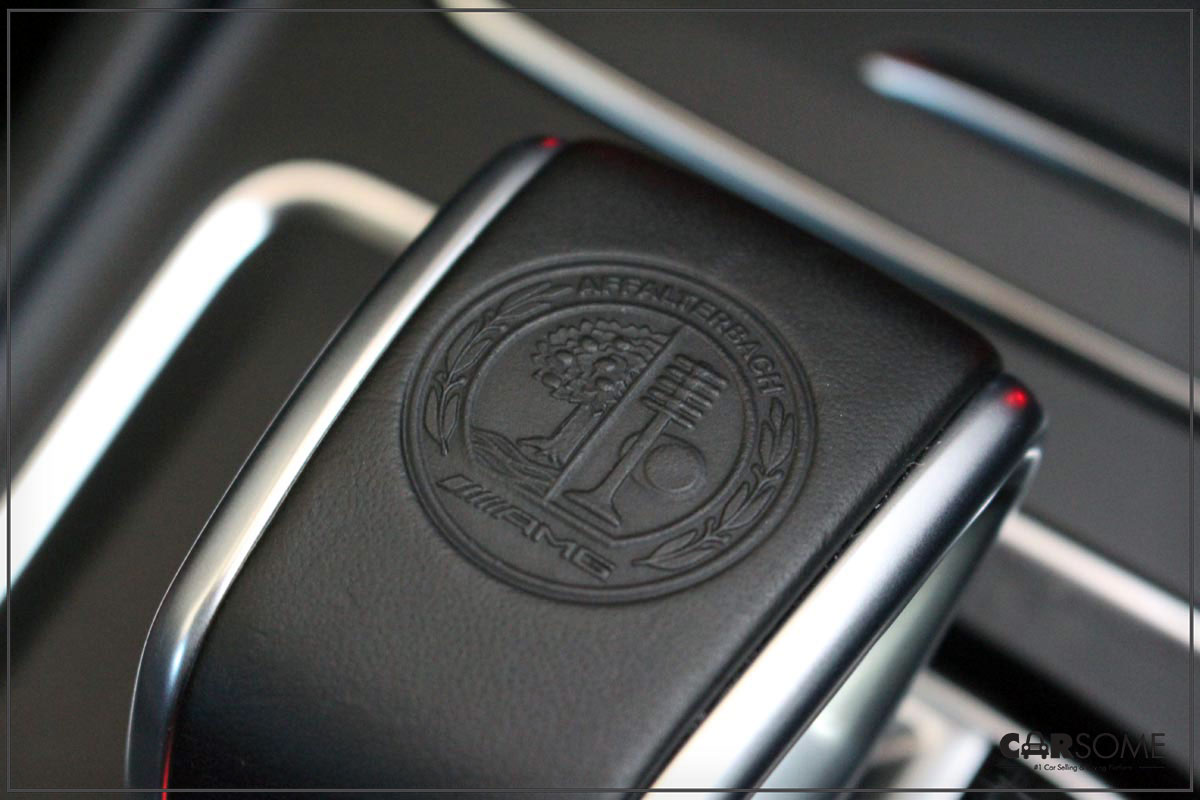 The engine in the GLA 45 is an amazing one. The brand has effectively managed to boost power to impressive numbers and yet provide a linear acceleration and power delivery. Of course the driving experience is quite a treat for the senses the moment the engine comes alive. Taking the car easy requires a little more throttle at the get go, but of course there’s plenty more even at half pedal. In fact, there’s more than enough power available that we couldn’t even fully bring it down on our daily drives. 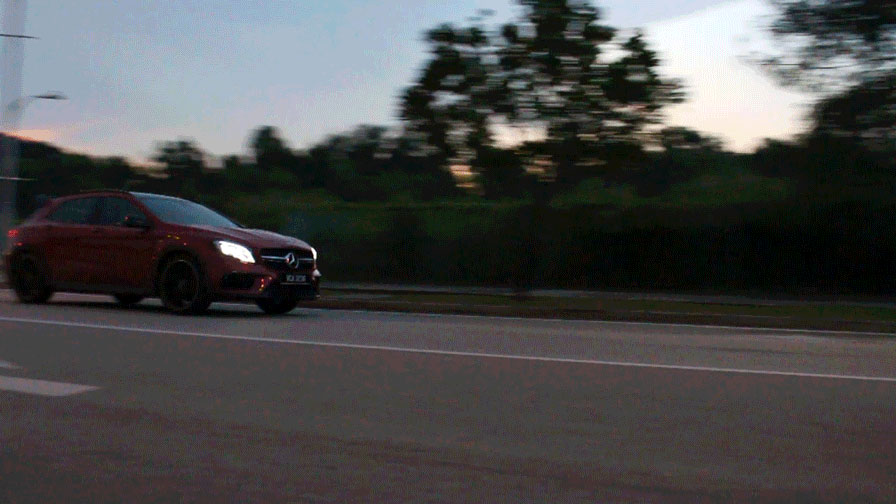 Adrenaline driven accelerations are met with the audible satisfaction of loud pops on upshifts and the crackle when lifting off, and it all comes together better when you do the shifts on your own. Taking sharp corners is where you can tell the AMG-ness shines – with little roll, confidence to speed up increases and directions change quick. When you’re ready to slow down, the brakes bite eagerly and work so well that it takes a tap just to get things to a halt. 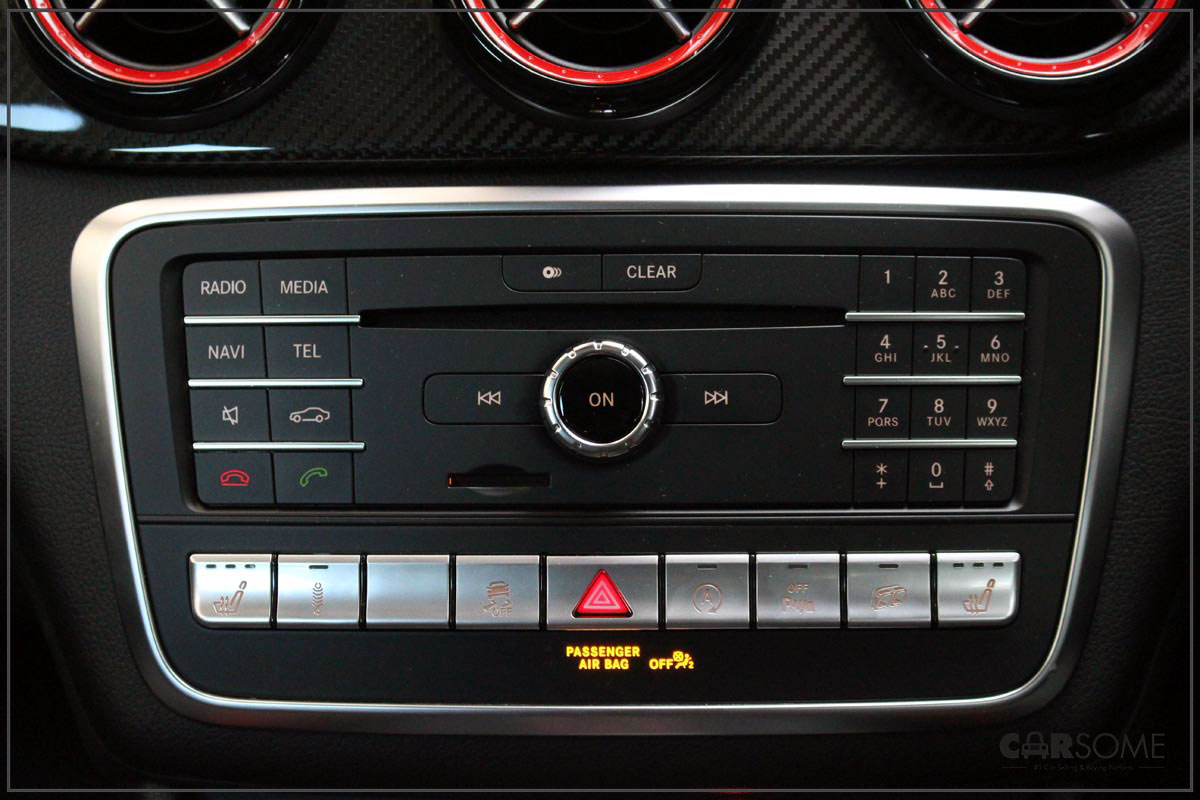 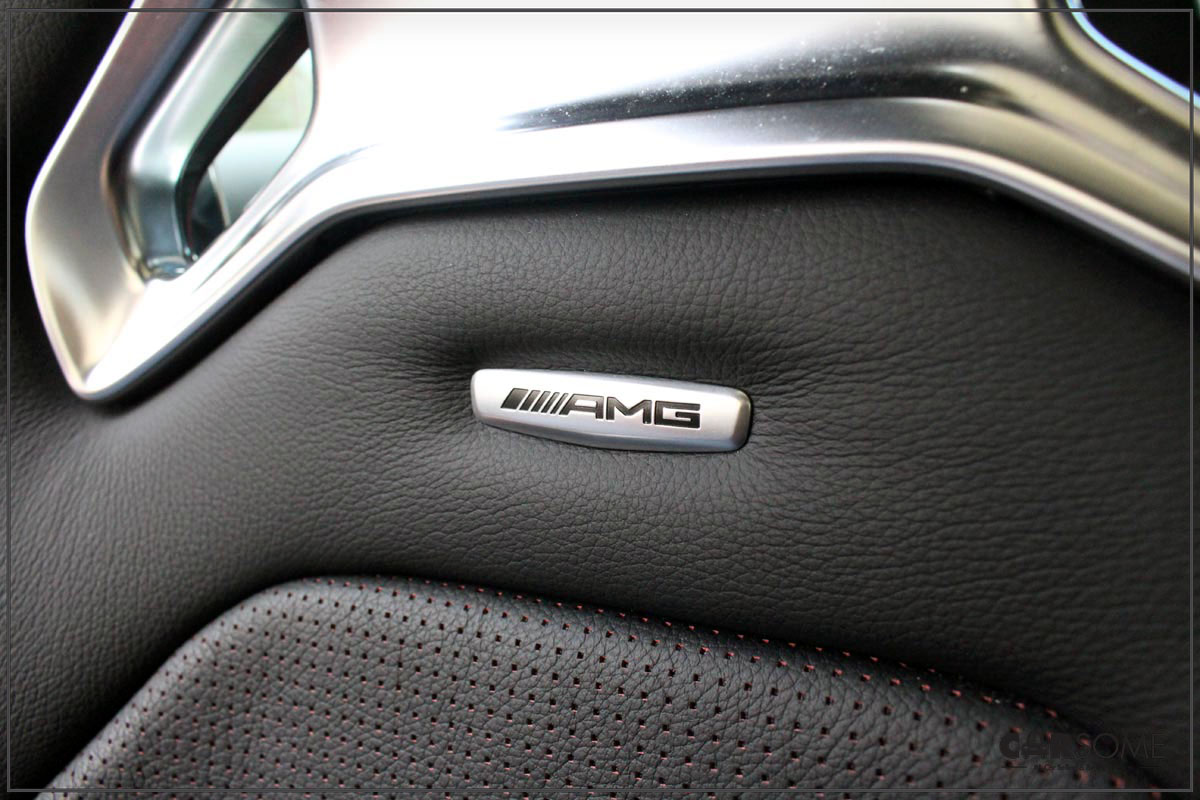 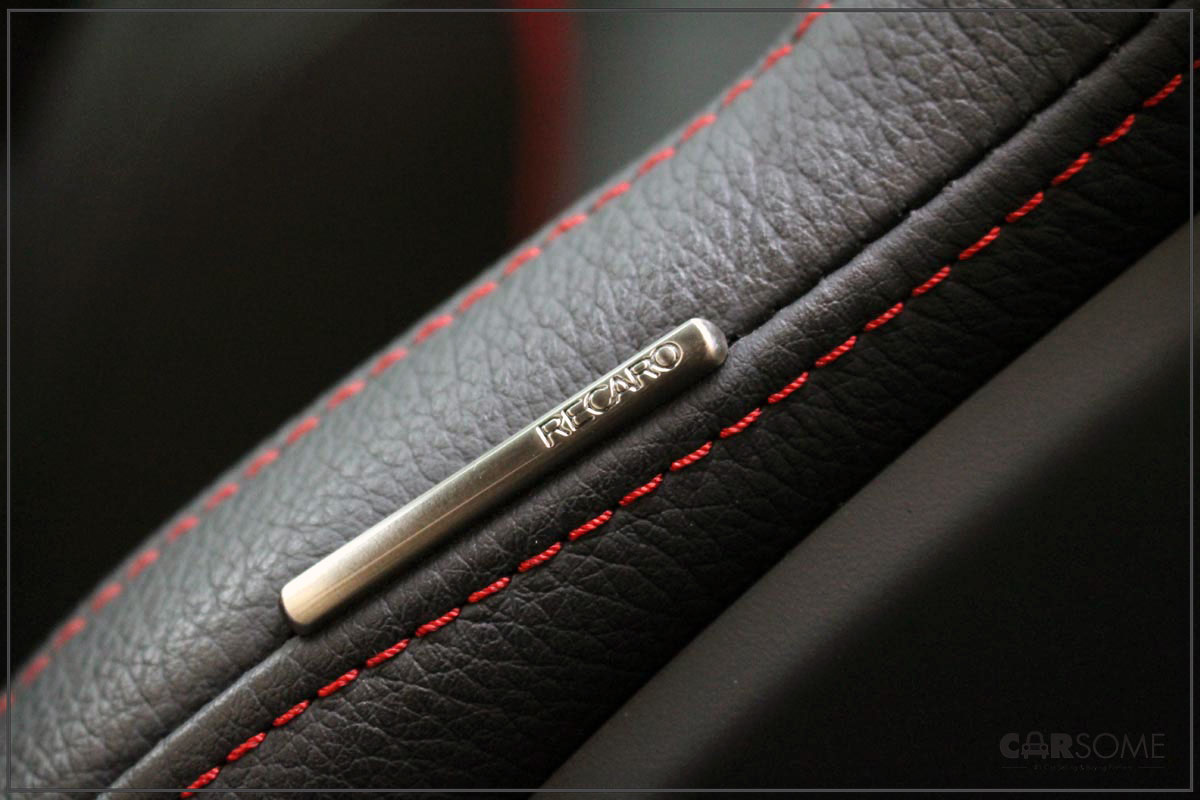 After using the GLA 45 as our daily driver we came to this conclusion. In its current offering locally, the GLA 45 is certainly a powerhouse machine that is purpose built for the track. You can have massive amounts of fun because it can be menacing and yet down to earth for you to use as a daily car. The only areas we think that would put away the potential buyer is the interior layout, which still features the old design language and the fact that the newer AMG A 35 is quite literally around the corner. Although it isn’t the same, we do think that its relative size, value and its pure driving nature is a win. Besides, the next GLA is still a long while away. Would you wait?

Looking to get that AMG of your dreams? Start by selling your car through us! We connect you to over 1,000 dealers nationwide!