Toll Rates in Malaysia for Popular Highways from PLUS to LPT

If you drive in Malaysia, chances are you’ve gone through several toll booths on the Expressways and Highways. However, have you ever wondered what are the different highways in Malaysia and what are their toll rates?

Some of the most popular highways in Malaysia include the North-South Expressway (NSE, or better known as PLUS), North Klang Valley Expressway (NKVE), and East Coast Expressway (LPT). The toll rates in Malaysia vary between each highway and are determined by your travel distance on the highway and vehicle class. You can pay the fares using several methods which are Touch ‘n Go card, SmartTag, and RFID. 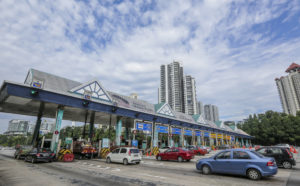 Besides the state, urban, and rural roads, highways play an important role in connecting locations throughout the country. And these highways have varying toll charges which go towards the maintenance and development of both existing and new highways. You can check the toll fares the next time you go on a road trip by using the Malaysian Highway Authority’s toll fare calculator. Malaysian highways have two toll systems: the open and closed system.

At an open toll, you pay a fixed fare based on your vehicle classification at the toll booth found on a certain part of the highway. Here are the expressways/highways that use the open toll system.

When you approach a closed toll system, you’ll need to collect a non-physical ticket (via Touch ‘n Go, SmartTAG, or RFID) before entering the expressway. When you exit the expressway, you will then pay the fare at the toll plaza based on how far you have traveled. Here are the expressways/highways that use the closed toll booth system.

Vehicle Classification for Tolls in Malaysia 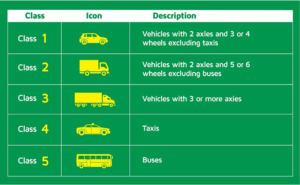 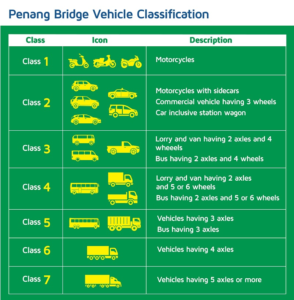 There are various highways across the country such as the PLUS, LPT, and NKVE that help shorten the travel time between towns, cities, and states. To know more about the toll fares of popular routes like KL to Penang or Gombak to Kuantan, check out the toll rates in Malaysia below.

The North-South Expressway (NSE) or more commonly referred to as the PLUS Highway is arguably the most popular highway in Malaysia. It’s one of the earliest networks of tolled controlled-access highways running through Peninsular Malaysia’s west coast. It connects eight states starting from Bukit Kayu Hitam, Kedah to Johor Bahru, Johor making it the longest highway in Malaysia at 748 km.

The East Coast Expressway is another popular expressway network in Malaysia. It connects to the Kuala Lumpur-Karak Expressway and serves to connect the west coast of Peninsular Malaysia to various locations on the east coast. This expressway connects three states which are Selangor, Pahang, and Terengganu.

The operational length of the LPT which includes Phase One and Phase Two of the expressway currently spans 433 km. There are two additional phases in the planning stage: Phase Three and Four. Phase Three will span 124 km from Kampung Gemuruh near Kuala Terengganu to Kota Bharu and Tumpat, whereas Phase Four will span 250 km from Gambang, Pahang to Johor Bahru. You can also check the LPT toll rates with this toll fee calculator.

The Klang Valley has the highest concentration of residents in the country and as a result, has a large number of expressways/highways besides the PLUS expressway which see a lot of traffic daily. Whether you commute on the NKVE, LDP, or DUKE expressway, you can learn more about the popular Klang Valley expressways and their toll rates below.

Read More: Things to Check When You Service Your Car

The New Pantai Expressway (NPE) is an expressway that connects Kuala Lumpur with Subang Jaya and Bandar Sunway. It provides easy access to Kuala Lumpur for Subang folks and eases congestion on the Federal Highway during peak hours. Below are the toll rates for NPE. 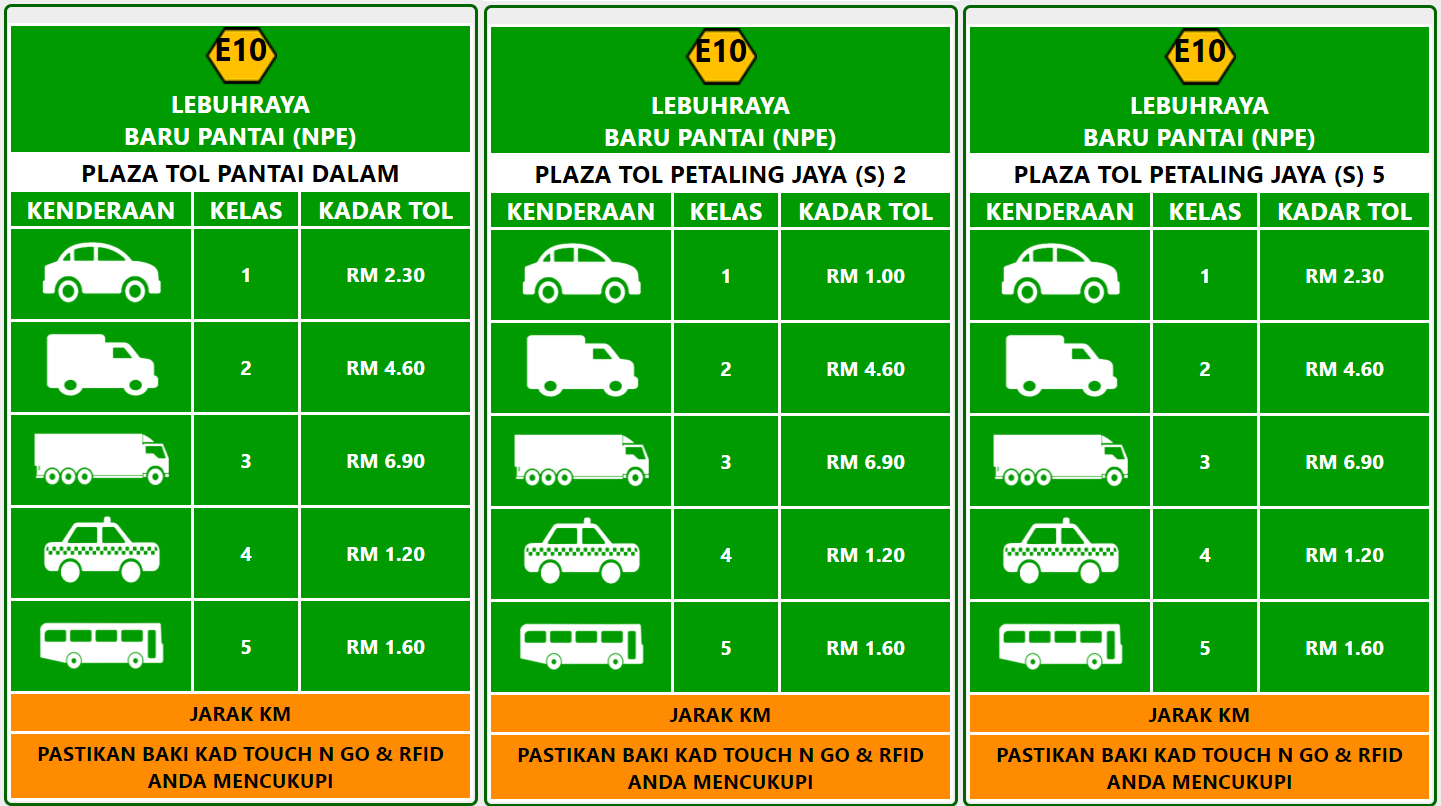 The New Klang Valley Expressway (NKVE) is an important expressway as it’s one of the most heavily utilized expressways in Klang Valley. It spans 35-kilometers, starting from Bukit Raja, Klang, it runs through Shah Alam, Subang, Damansara, to Jalan Duta in Kuala Lumpur. You can check the toll rates for NKVE here.

The Maju Expressway (MEX) was previously known as the Kuala Lumpur-Putrajaya Expressway. It provides a direct connection between Kuala Lumpur and Putrajaya, spanning 26 km. MEX is expected to be further extended to provide easier access to the Kuala Lumpur International Airport (KLIA) in Sepang. Below are the toll rates for MEX. 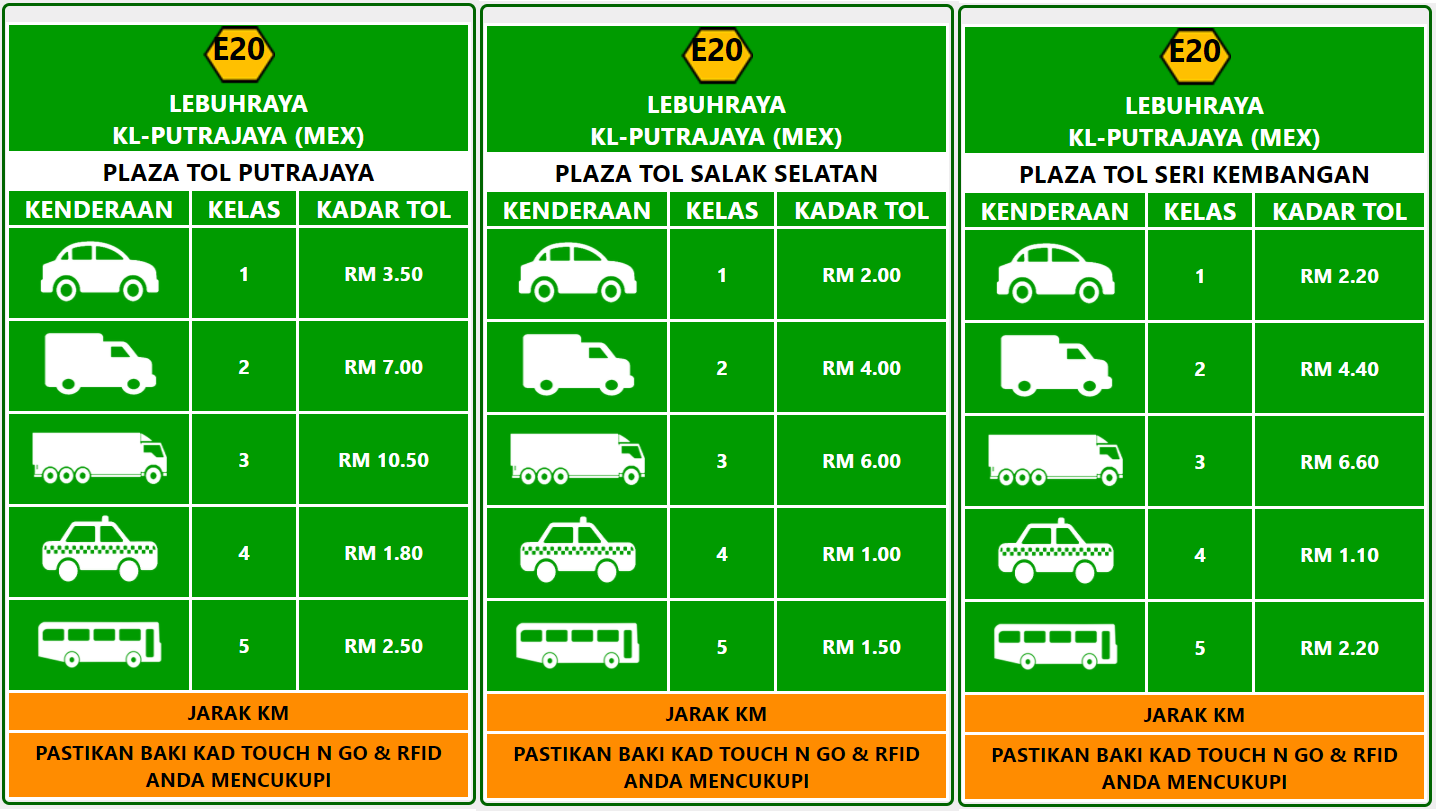 The Duta-Ulu Klang Expressway (DUKE) connects Duta in the west, Ampang in the east, and Karak in the north. This expressway completes the Kuala Lumpur Intermediate Ring Road by connecting with NKVE, SPRINT (at Penchala Link), and the Middle Ring Road 2 (MRR2). DUKE allows road users to bypass the heavy traffic areas and travel quickly within KL making it an important expressway in KL. Below are toll rates for DUKE.

The Damansara-Puchong Expressway connects Sri Damansara to Petaling Jaya, Puchong, and Putrajaya. It receives high traffic daily and is a crucial highway for residents in the surrounding area. In fact, it’s estimated to handle around 420,000 vehicles per day. Below are the toll rates for LDP. 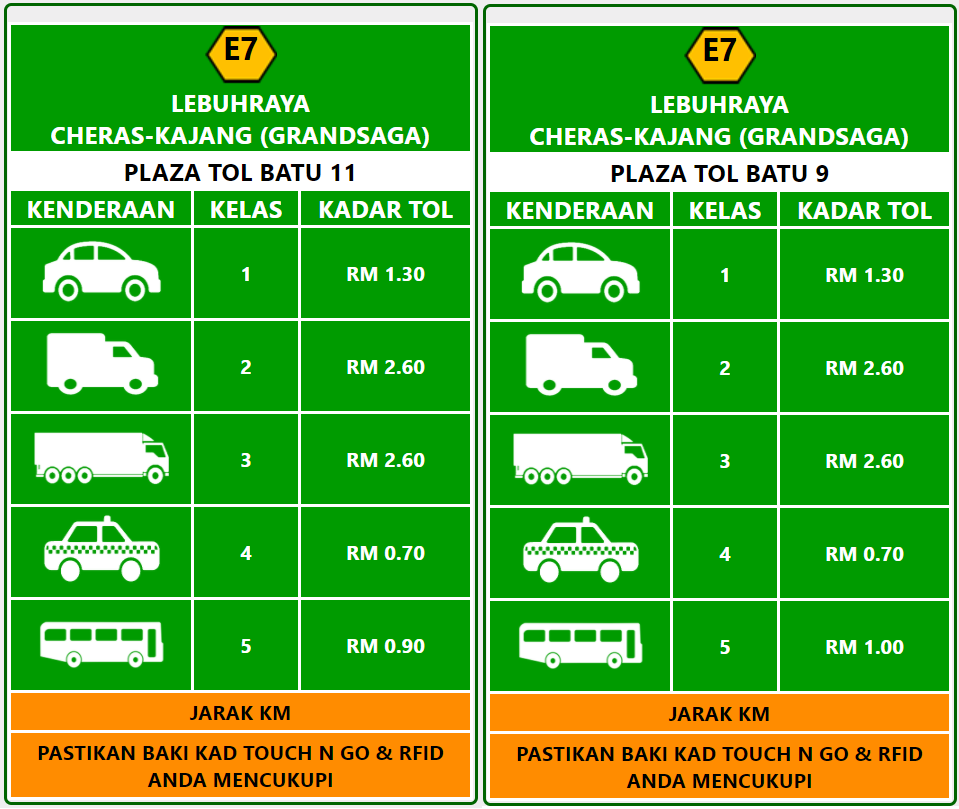 The Kajang-Seremban Expressway (LEKAS) provides an alternative route for drivers going south of Klang Valley. It connects Kajang to Pajam, Nilai, Mantin, and Seremban, allowing for speedy travels to these areas. Drivers from KL can enter LEKAS via the Kajang Dispersal Link Expressway (Kajang SILK) and Cheras-Kajang Expressway. You can check the toll rates for LEKAS here.

The North-South Expressway Central Link (ELITE) is an important connector for the PLUS northern route, NKVE, and PLUS southern route expressways. It’s also one of the main routes that connect Kuala Lumpur with the Kuala Lumpur International Airports (KLIA and KLIA2), as well as the Sepang International Circuit. You can check the toll rates for ELITE here.

The Ampang-Kuala Lumpur Elevated Highway (AKLEH) is Malaysia’s first elevated highway. It was built to ease traffic along Jalan Ampang to help road users traveling between Ampang and Kuala Lumpur. Below are the toll rates for AKLEH. 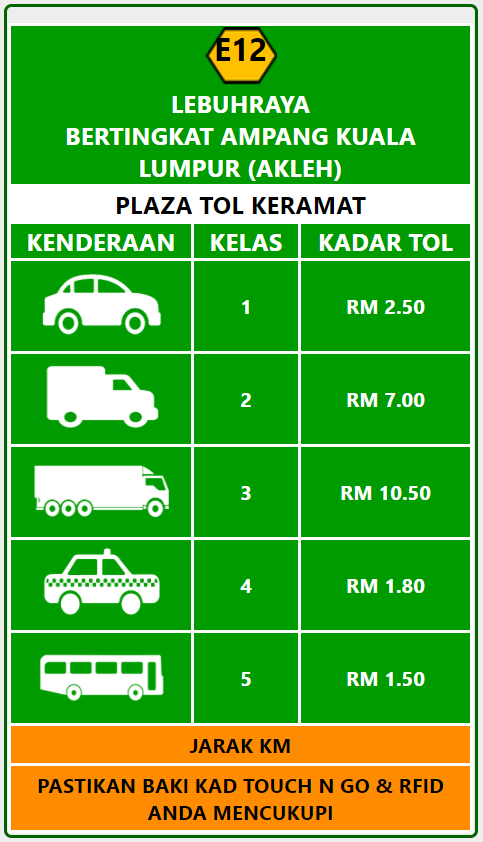 The Stormwater Management and Road Tunnel, better known as the SMART Tunnel begins near Klang River at Ampang and ends at Taman Desa lake at Salak South. Besides easing traffic congestion in Kuala Lumpur, its main function is to prevent flash floods in the city. It’s the longest stormwater diversion tunnel in Southeast Asia and the second-longest in Asia. Below are the toll rates for the SMART Tunnel. 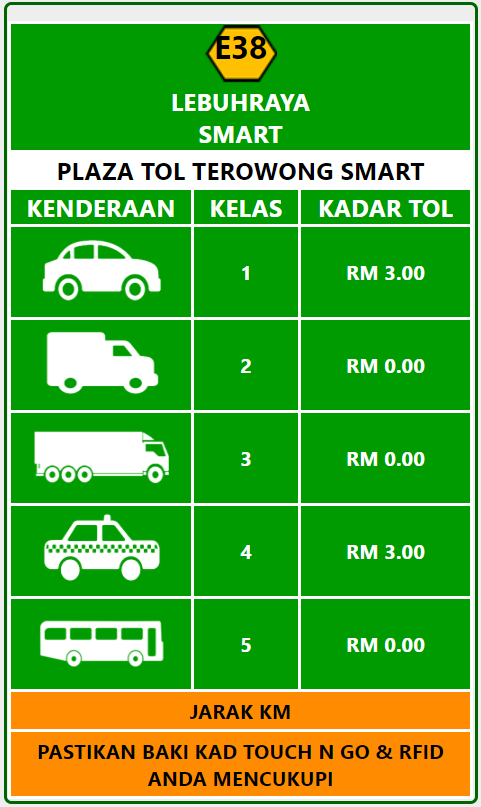 The South Klang Valley Expressway (SKVE) is a 51.7-kilometer expressway in the southern Klang Valley region which is also the highest densely populated region. It connects Kajang, Putrajaya, up to Carey Island in Kuala Langat. You can check the toll rates for SKVE here.

The Kajang Dispersal Link Expressway (Kajang SILK) functions to ease traffic congestion for road users in Semenyih, Kajang, Sungai Chua, Balakong, and Sungai Long. It also connects to other main highways including the Kuala-Seremban Expressway, Sungai Besi Expressway, Cheras-Kajang Expressway, and LEKAS. Below are the toll rates for Kajang SILK.

The Shah Alam Expressway (KESAS) functions to ease traffic congestion on the Federal Highway by linking Pandamaran in Klang with Sri Petaling in Kuala Lumpur. It’s the third east-west running highway in Klang Valley after the Federal Highway and NKVE. Below are the toll rates for KESAS.

We hope this information can help you to better plan your travels in the future. Also, make sure your Touch ‘n Go card or eWallet has sufficient credit when you travel to ensure a smooth journey. If you need a car for your daily commute or outstation travels, check out the extensive offering of used cars on Carsome. All our cars go through a 175-point inspection to ensure they’re free of major damage.

When you’re browsing on Carsome, look out for Carsome Certified cars for added peace of mind. Only 1 in 100 cars pass our strict requirements to be Carsome Certified. We not only refurbish these cars to look as good as new but also offer a one-year warranty for extra assurance to our customers.