Highlights at the 2017 Malaysia Autoshow! 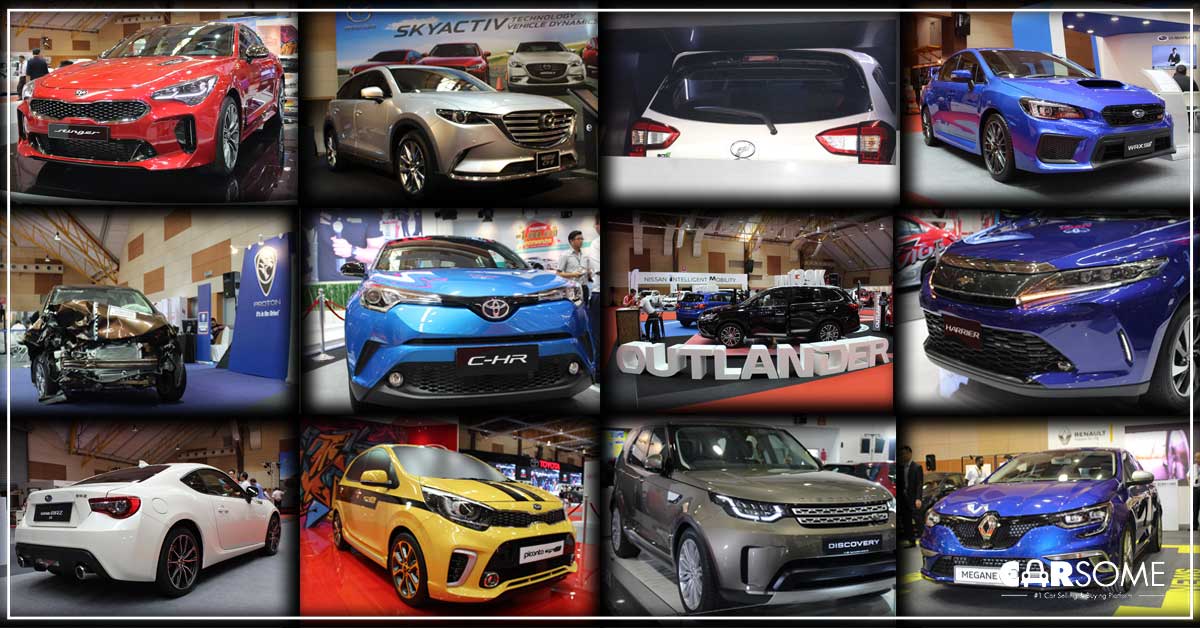 The Malaysian Autoshow is an almost yearly affair, with last year’s highlights focusing on cars from Kia, Mazda, Hyundai, and Subaru, this year’s is larger with more cars, and exciting happenings for all. We’ve compiled the best of this year’s show for those who can’t make it this weekend! But should you, don’t forget to check out the 4X4 area, Karting Slalom and put in your name for a chance to win a Peugeot 208 Puretech!

Read on to find out this year’s highlights! 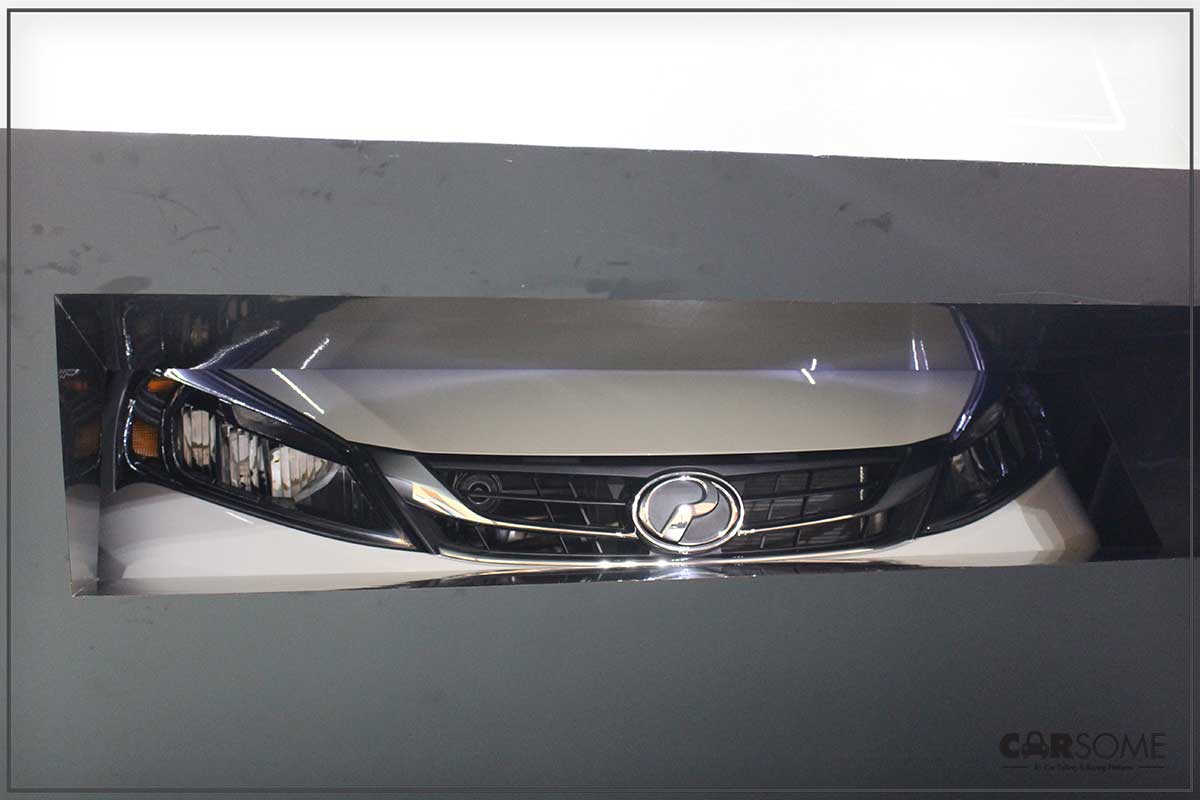 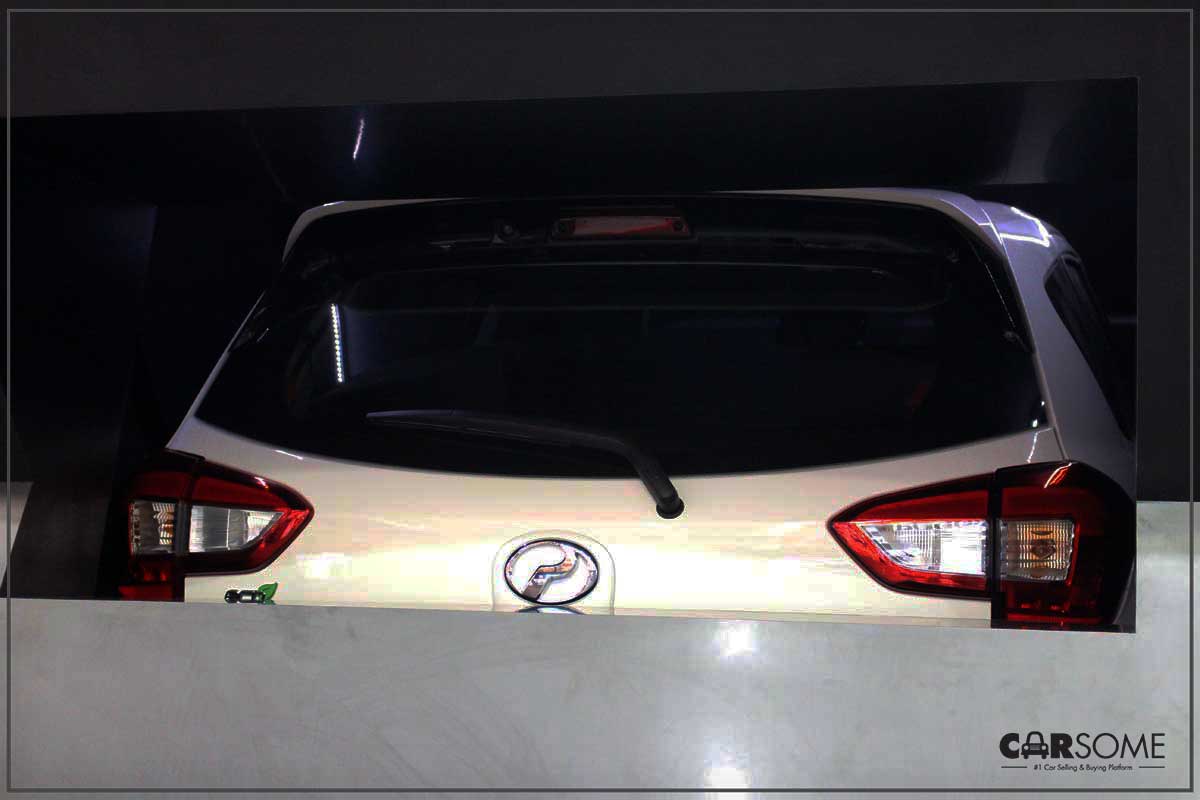 Those visiting the Malaysia Autoshow this year will be able to catch a glimpse of the new Myvi as the brand continues to tease the 3rd generation hatchback before its official launch. Available in five variants of a 1.3 and 1.5-litre engines, it will feature Advance Safety Assist systems including low speed autonomous braking, and Pedal Misoperation Control for those accidental accelerations. Those visiting the Perodua booth will also be able to see the brand’s Gear Up accessories, as well as the recently announced Isofix Child Care Seats. 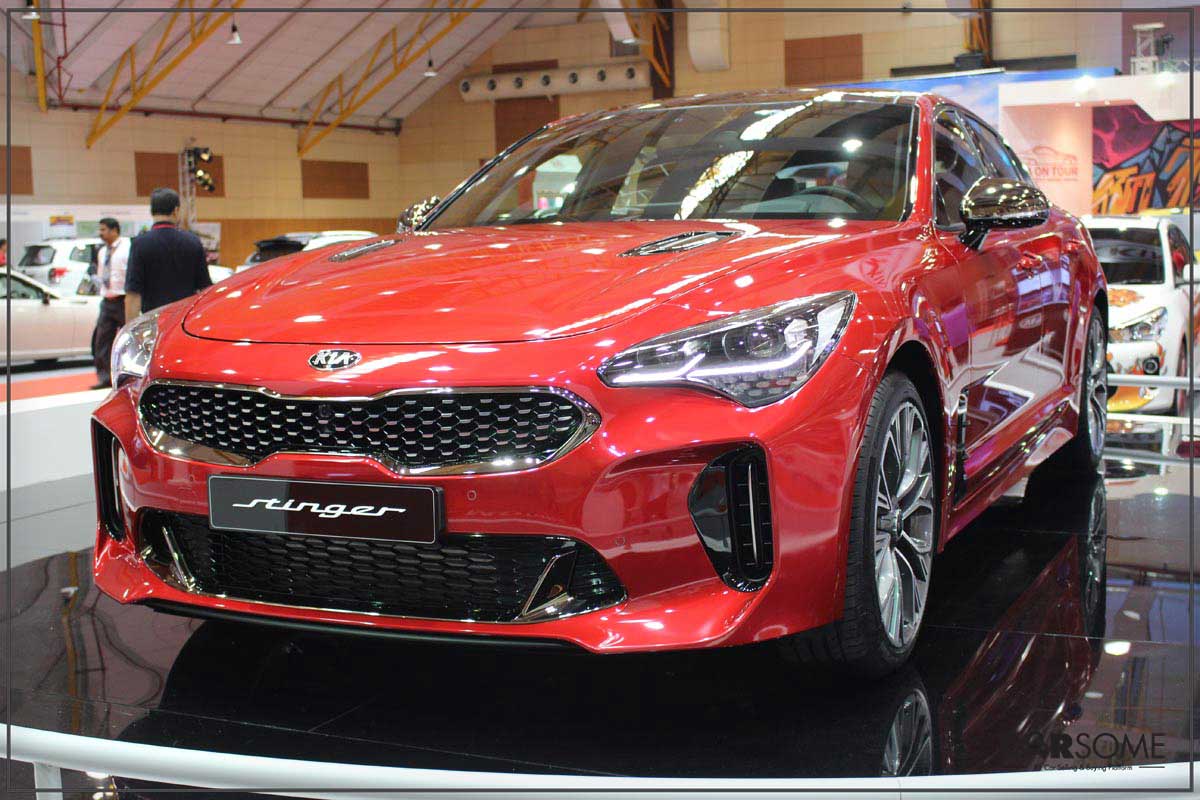 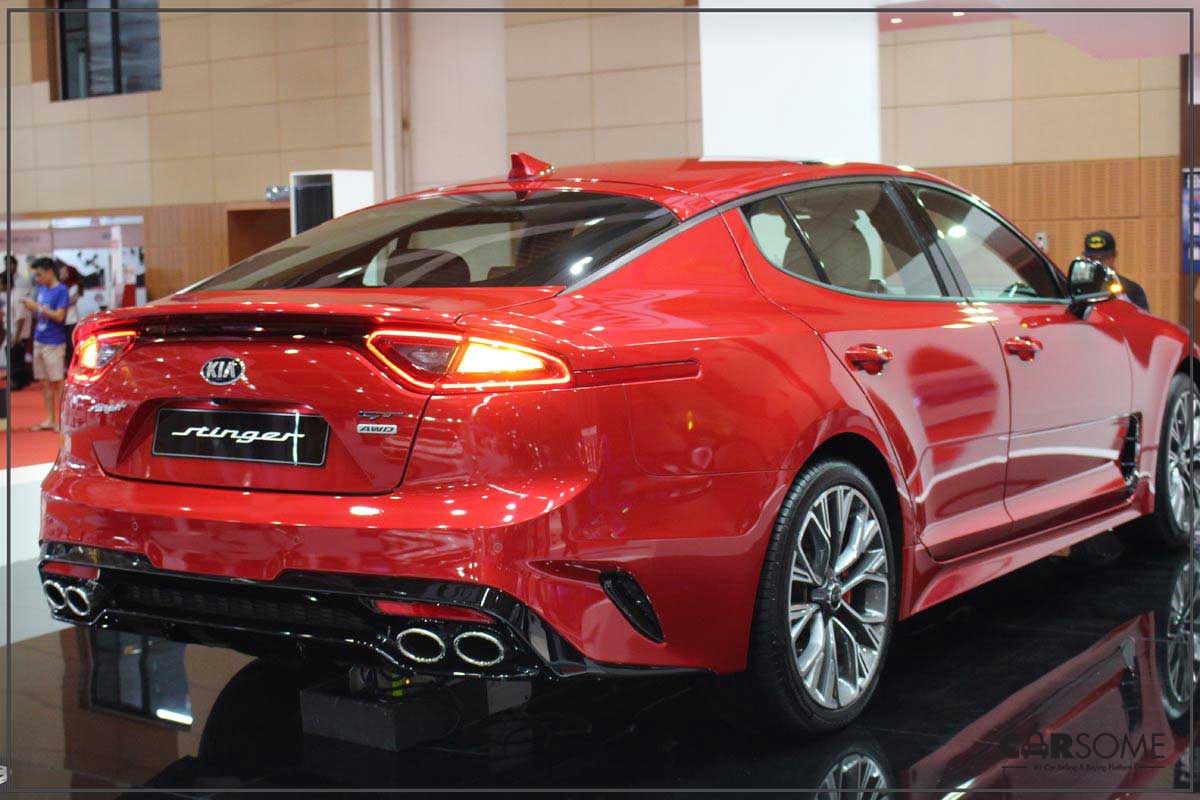 At the Kia booth, you’ll be able to see one of the sexiest cars on display at the Autoshow. The Stinger makes its debut here in Malaysia as the high-end GT variant with a 3.3-litre V6 twin-turbo engine developing 365 hp and 510 Nm of torque from 1,300 to 4,500 rpm through an eight-speed automatic transmission. Foot to the ground from a standstill, the Stinger will be able to reach 100 km/h in 4.9-seconds. Options of all-wheel or rear-wheel drive is dependent on market. It has to be seen to be fully appreciated. 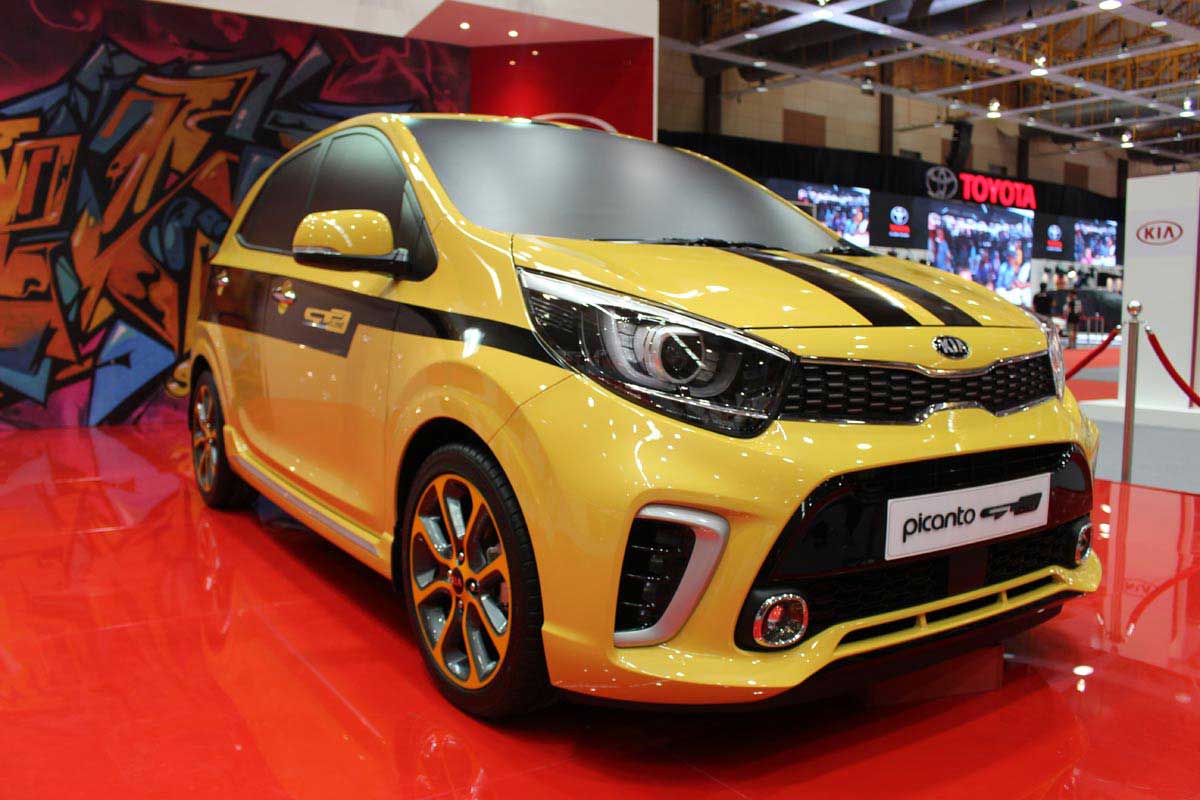 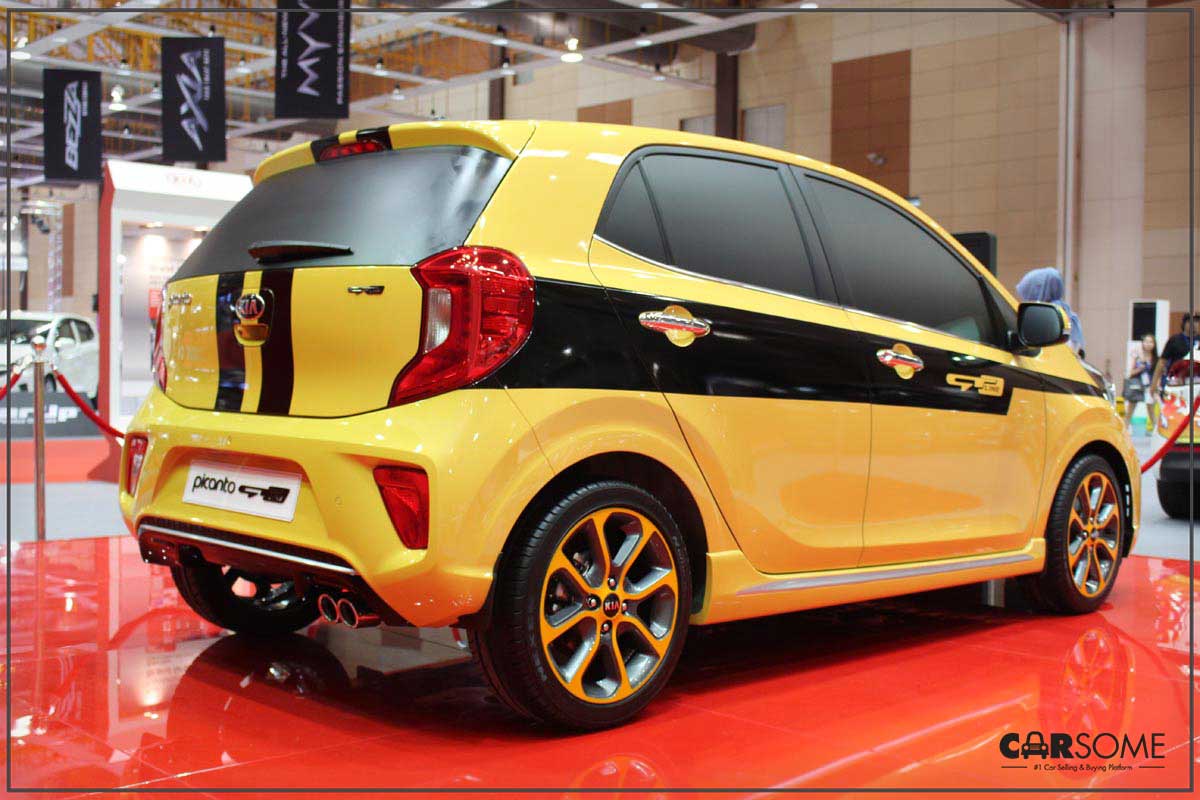 The Kia Picanto shows up at the Autoshow 2017 as a GT Line model with super slick modified front and rear bumpers. The GT Line Picanto tinted mirrors was obvious from the start to shade the viewing public from peeking into its interior. Yet what comes together is the U-shaped LED daytime running lights as well as striking LED tail lights. Powered just at 83 hp and 122 Nm of torque at 4,000 rpm, the 1.25 litre DOHC four-cylinder engine should be a zippy thing. The Picanto is expected to cost about RM 60,000 when it officially launches in the first quarter next year. 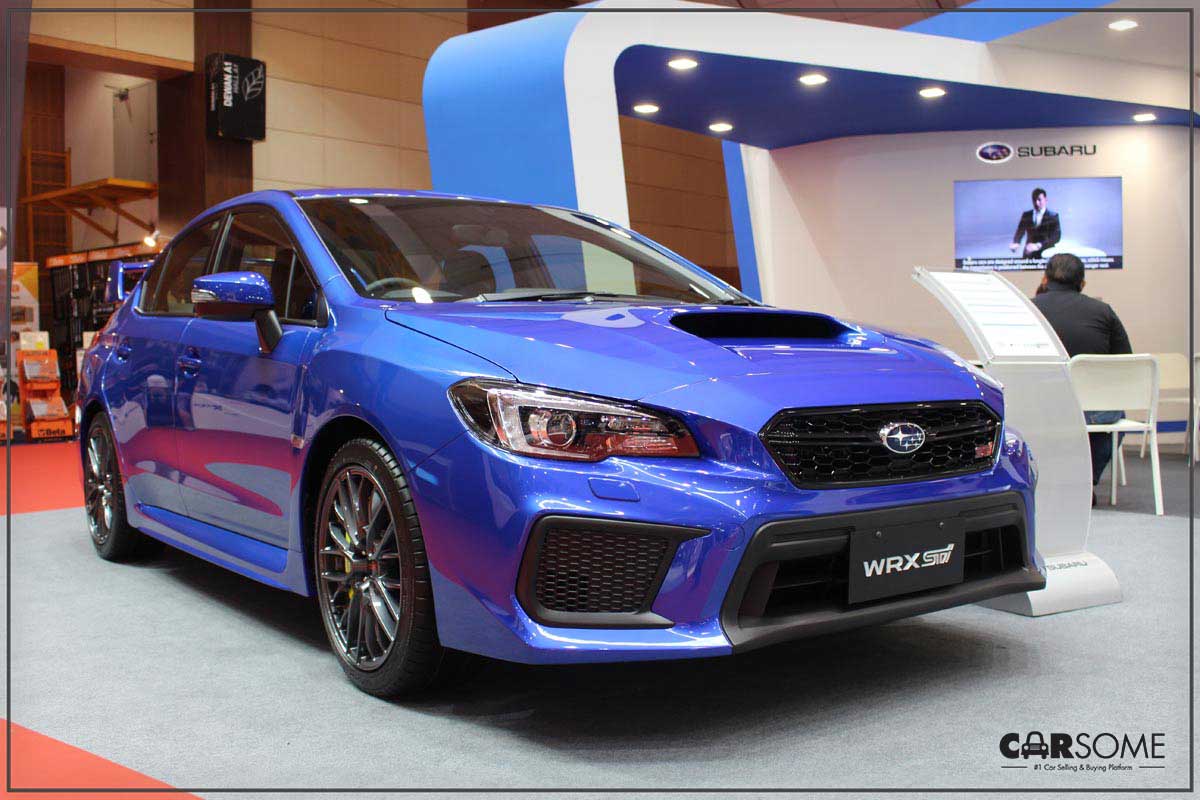 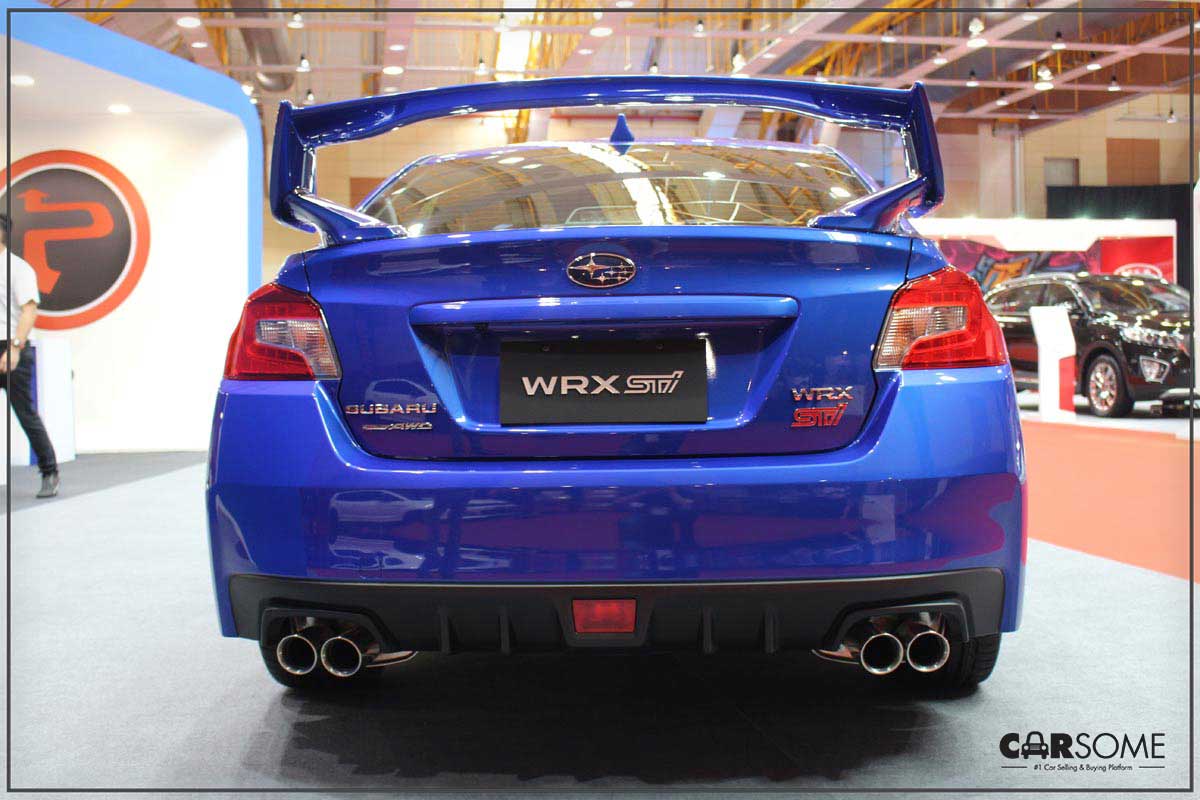 This is the car for the fanboys. The latest 2018 WRX STI makes its preview here with all its muscular looks, 2.5-litre boxer four-cylinder turbo engine that outputs 296 hp and 407 Nm of torque at 4,000 rpm. Unlike the BRZ, the WRX STI features the brand’s award winning Symmetrical All-Wheel Drive system mated to a six-speed manual. The price? RM 309,647. Will it see a launch soon? 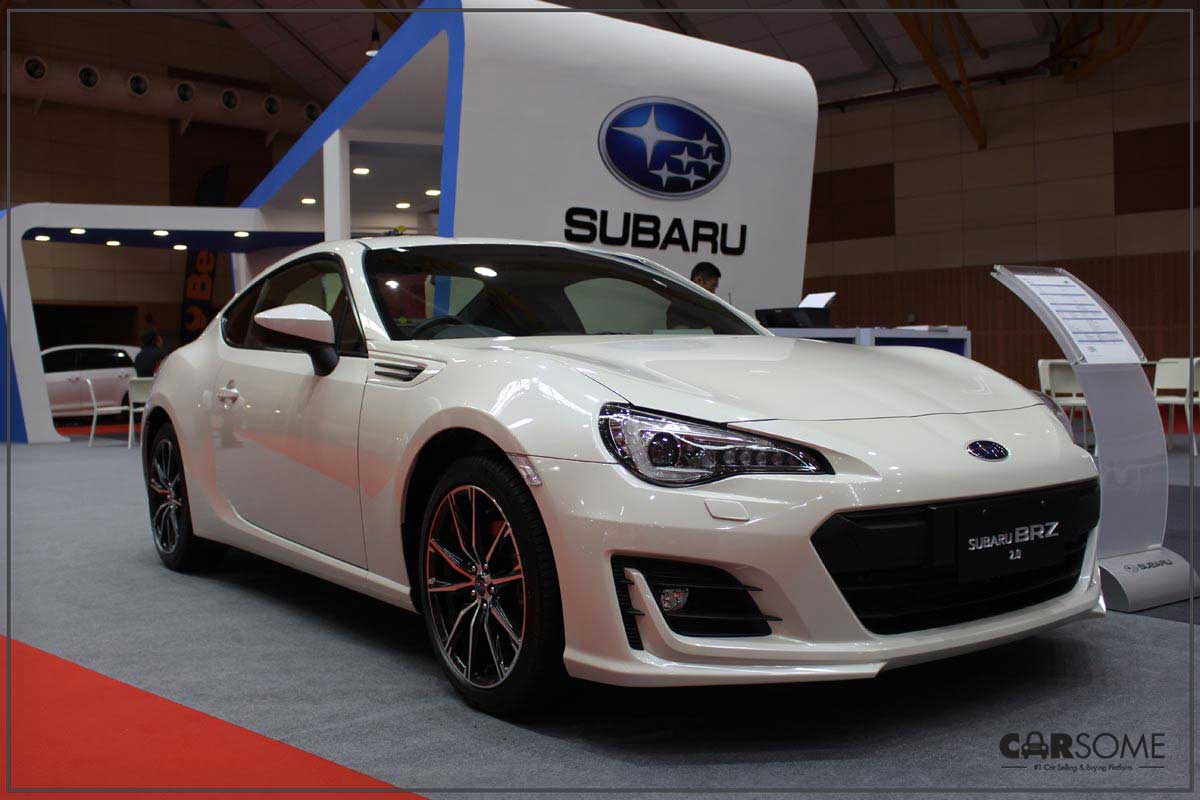 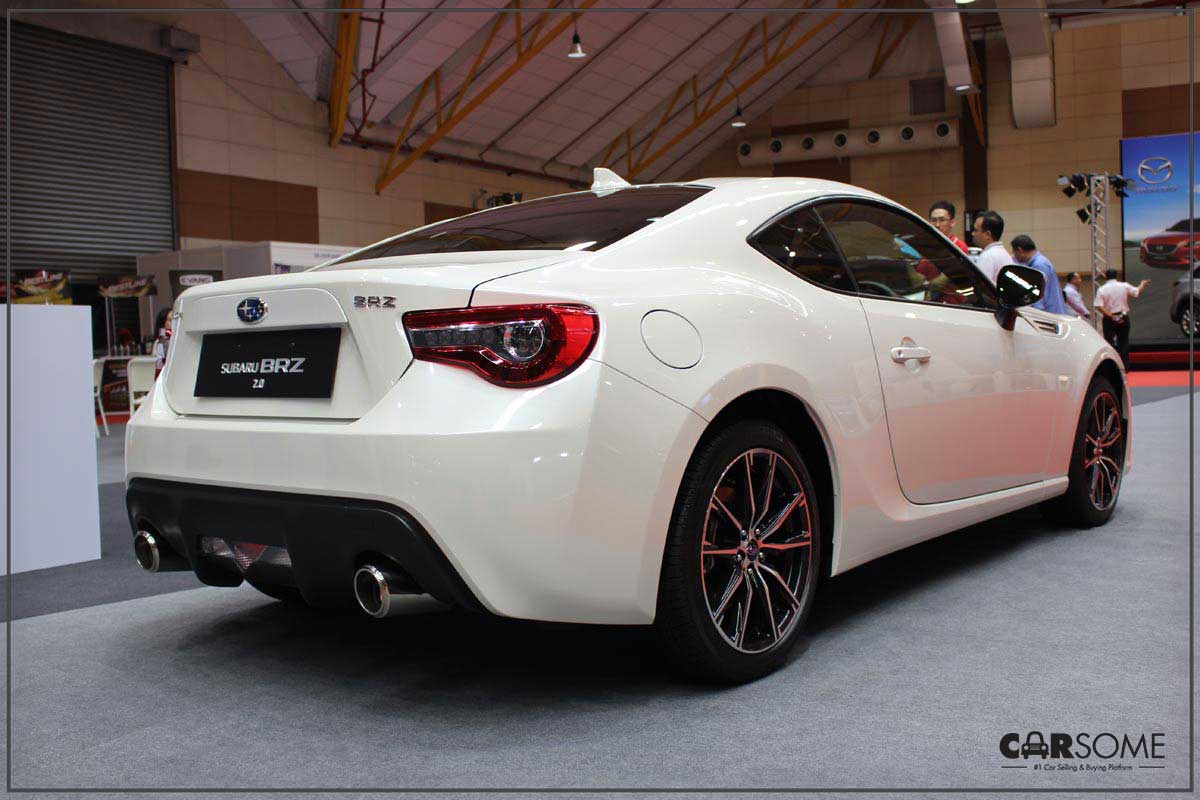 The facelifted BRZ which was officially launched in August makes its public debut alongside its more powerful WRX STI sibling at the show. With this new BRZ, customers can now have a six-speed manual option alongside the six-speed automatic which was standard in the pre-facelift. Engine is still the same 2.0-litre boxer four cylinder developing 197 hp and 205 Nm of torque. Similarities between the BRZ and the Toyota 86 is the new rear LED taillamps and the 17-inch alloy wheels. The BRZ is priced at RM 224,389 for the manual and RM 230,749 for the automatic. Prices are on the road without insurance. 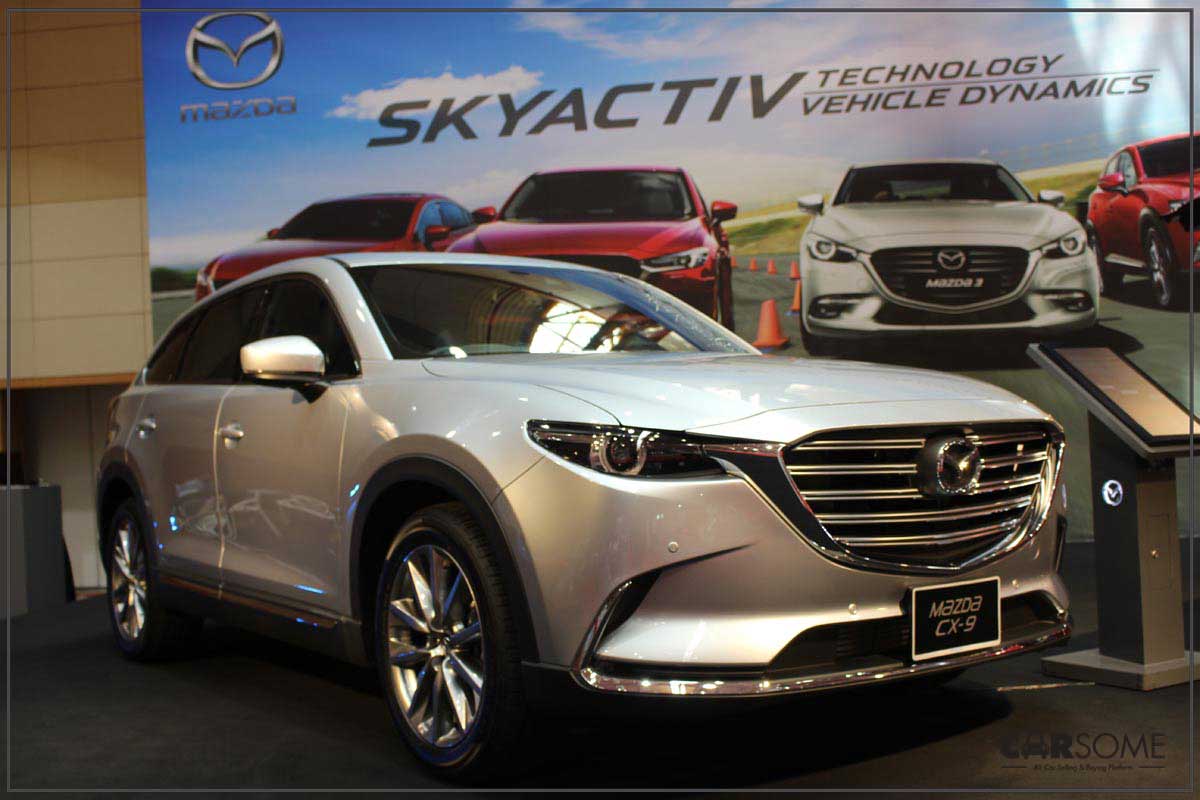 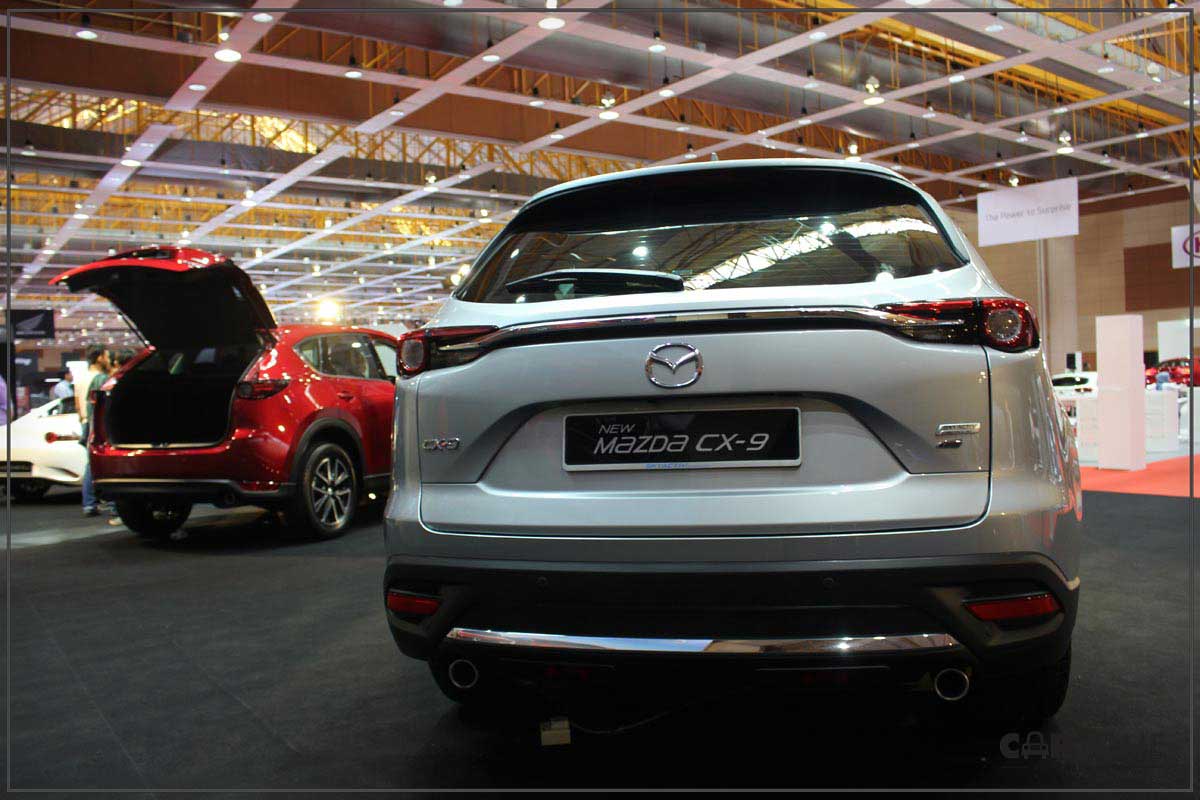 Mazda’s full range of vehicles is on show from hatchbacks to SUVs. The brand’s flagship SUV, the CX-9 is previewed here. Prices are finally out, with only the 2.5-litre variant either in a 2WD or AWD version at RM 281,449, and RM 297,349 respectively. On the outside, the exterior is fitted with LED daytime running lights, bi-LED headlights and a sunroof. Powered by a six-speed SkyActiv-Drive automatic transmission, the 2.5 litre SkyActiv-G turbo petrol engine mounts up with 228 hp and 420 Nm. Warranty will include a five year or 100,000 km, and three-year or 60,000km free maintenance. 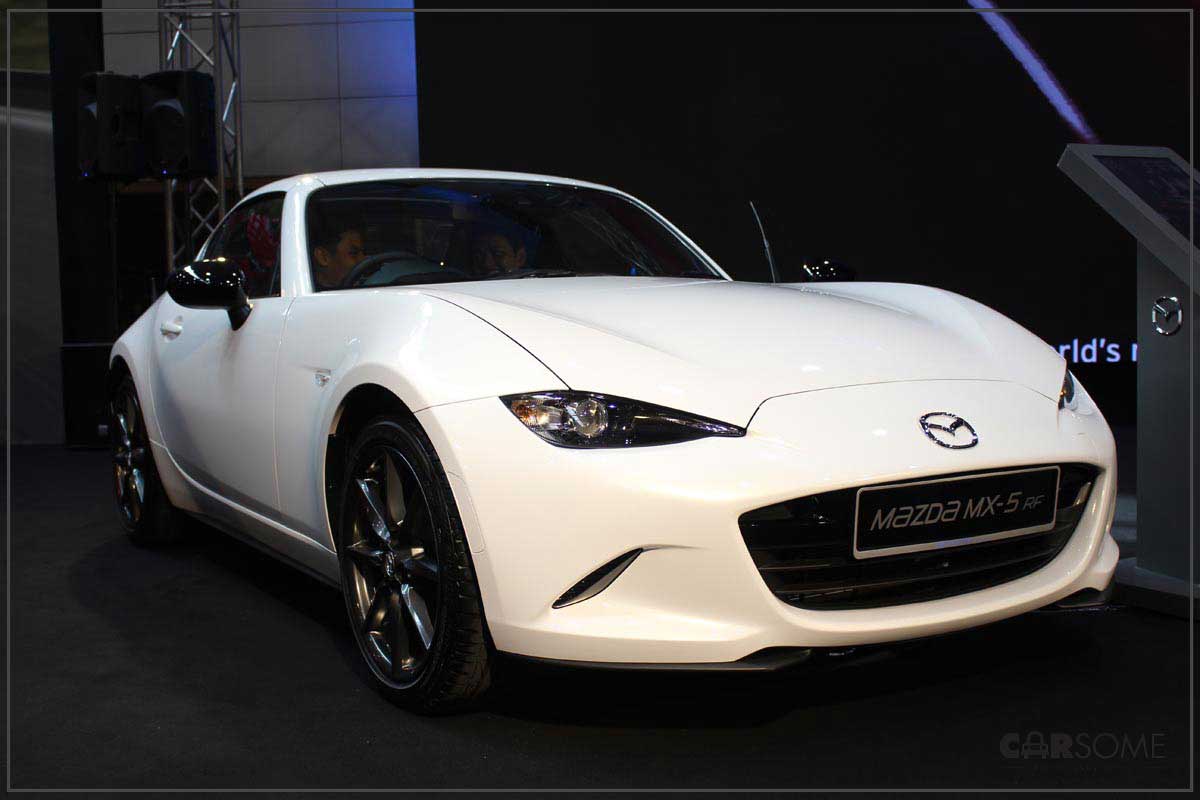 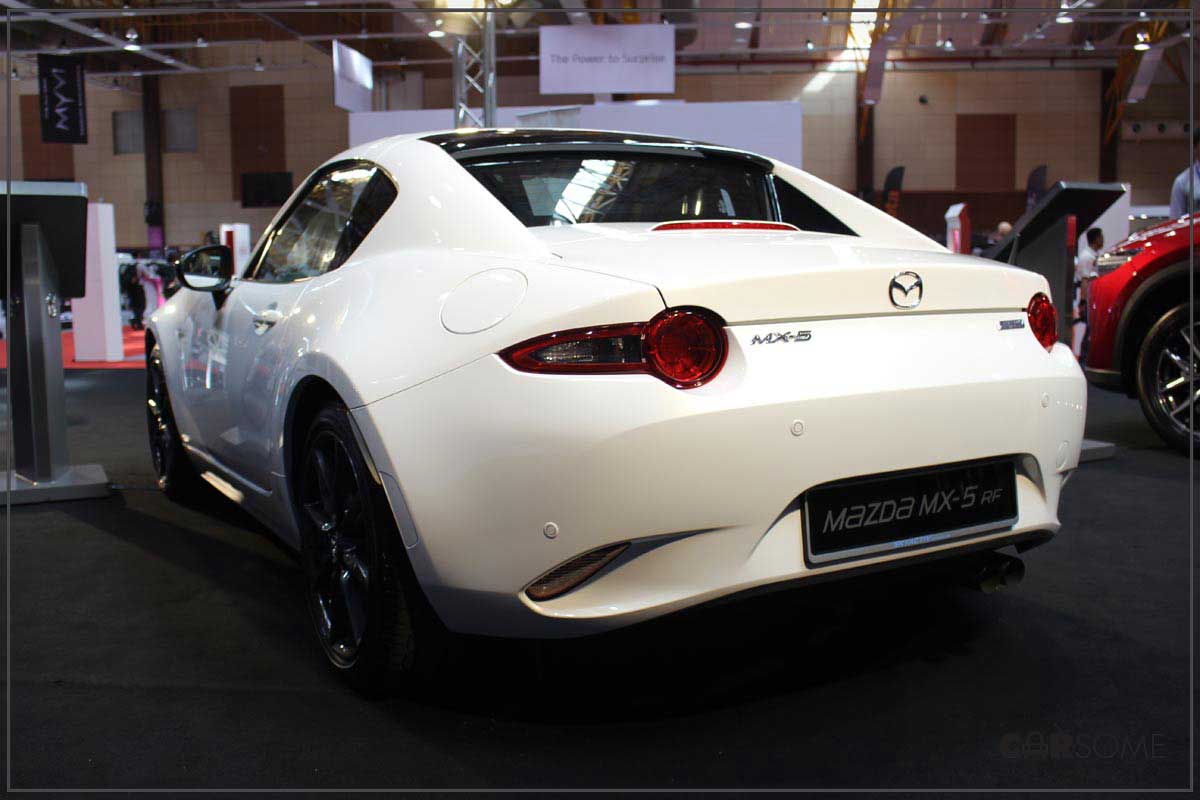 This is not a debut but the world’s most popular roadster is quite a joy to see in the flesh. This hardtop version RF (Retractable Fastback) can be had with a six-speed manual or automatic transmission. This sits alongside the new CX-5 and CX-9, the latter which will be launched very soon. 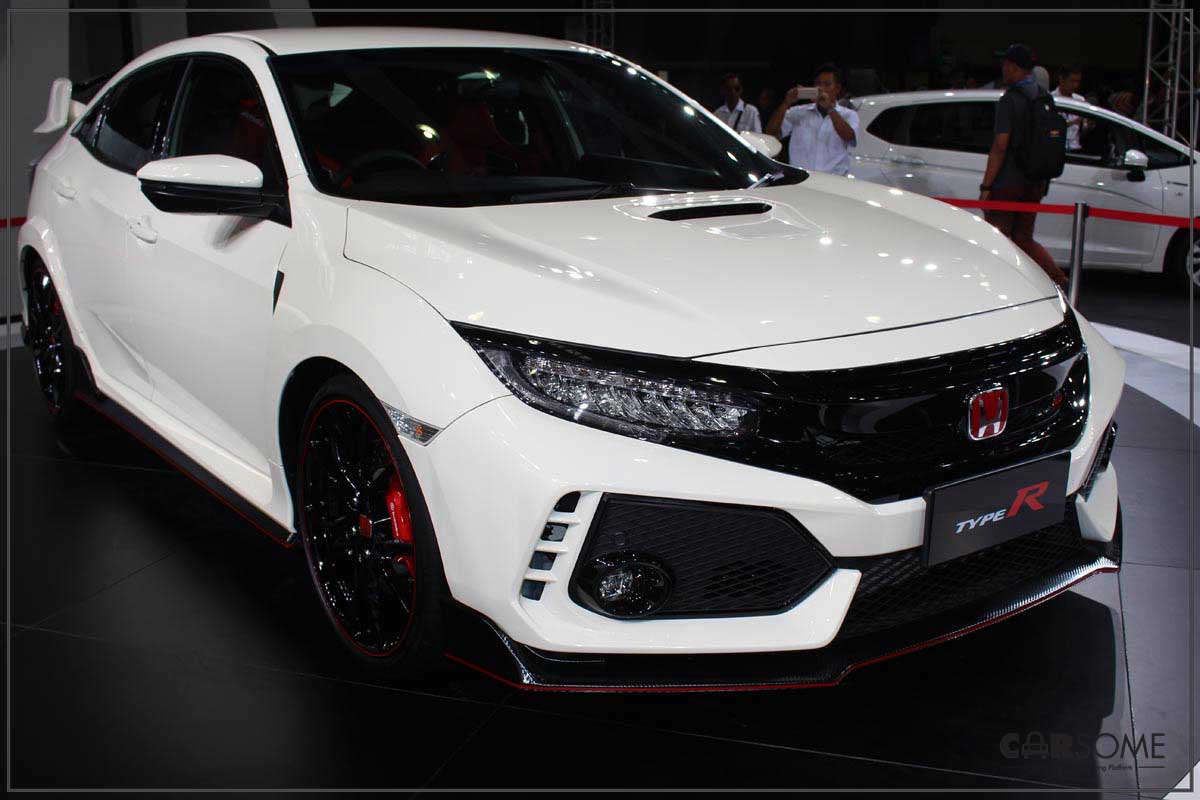 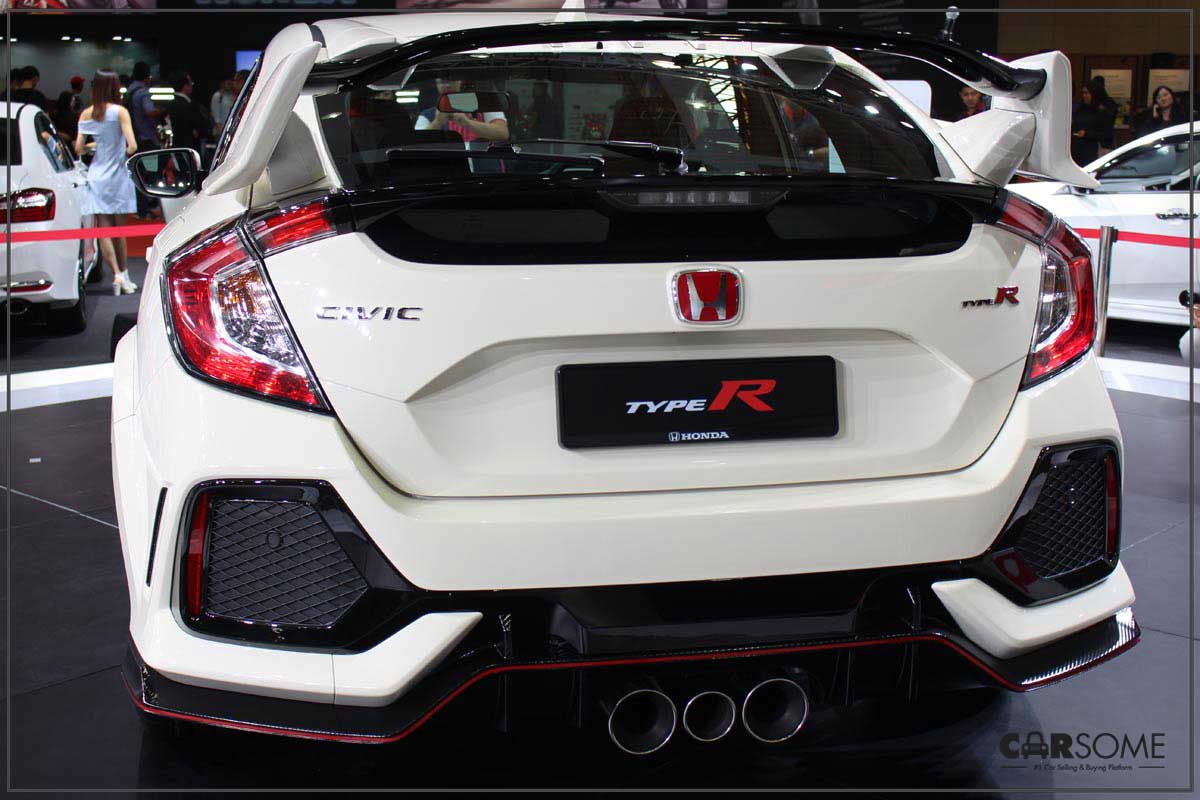 One of the highlights at the Autoshow is Honda’s display of the new Civic Type R. Visitors will be able to see the most powerful Honda ever launched by the brand in Malaysia. The car currently holds the fastest front wheel drive record for a production car at the Nürburgring. Powered by a 2.0-litre VTEC Turbocharged engine producing 306 hp and 400 Nm of torque from 2,500 to 4,500 rpm, the Type R is priced at RM 320,000 excluding insurance. Visitors at the Autoshow will also have a chance for a taxi-ride in the new Type R subject to terms and conditions. The Honda booth will also have the latest range of Honda cars and the brand’s latest “Challenging Spirit” lifestyle merchandise for purchase. 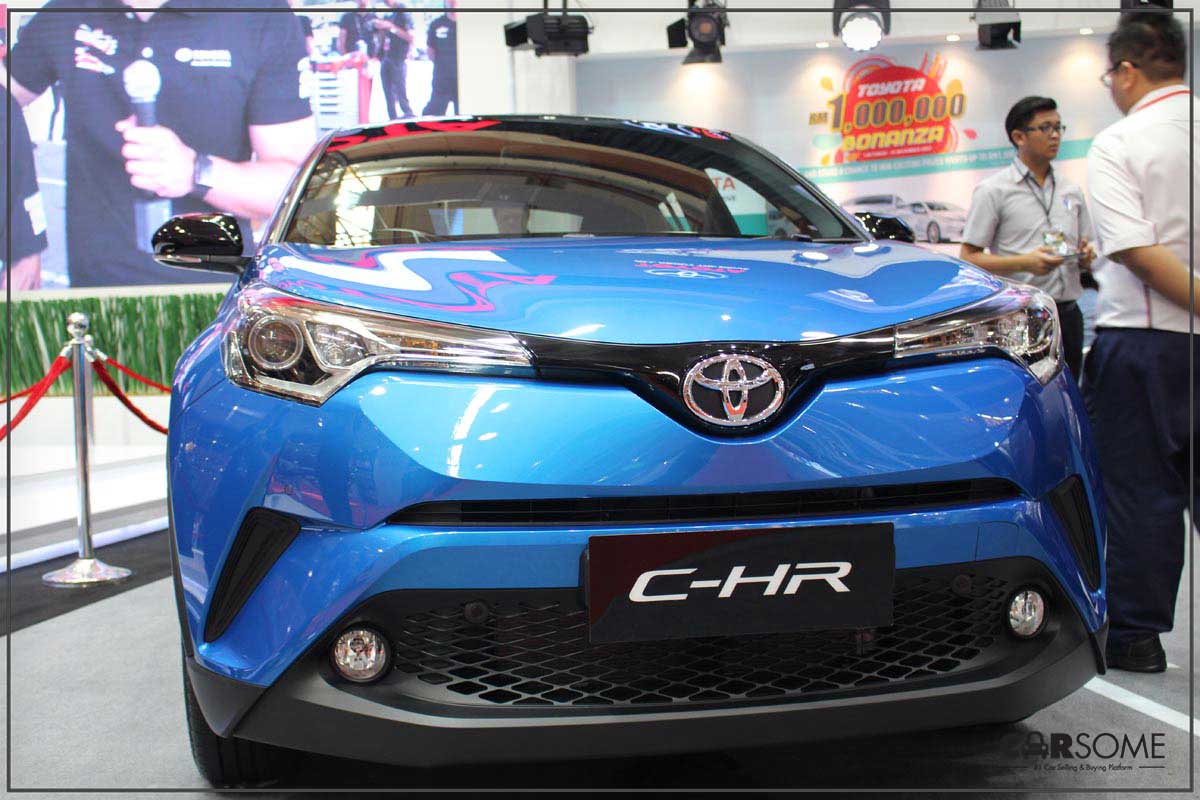 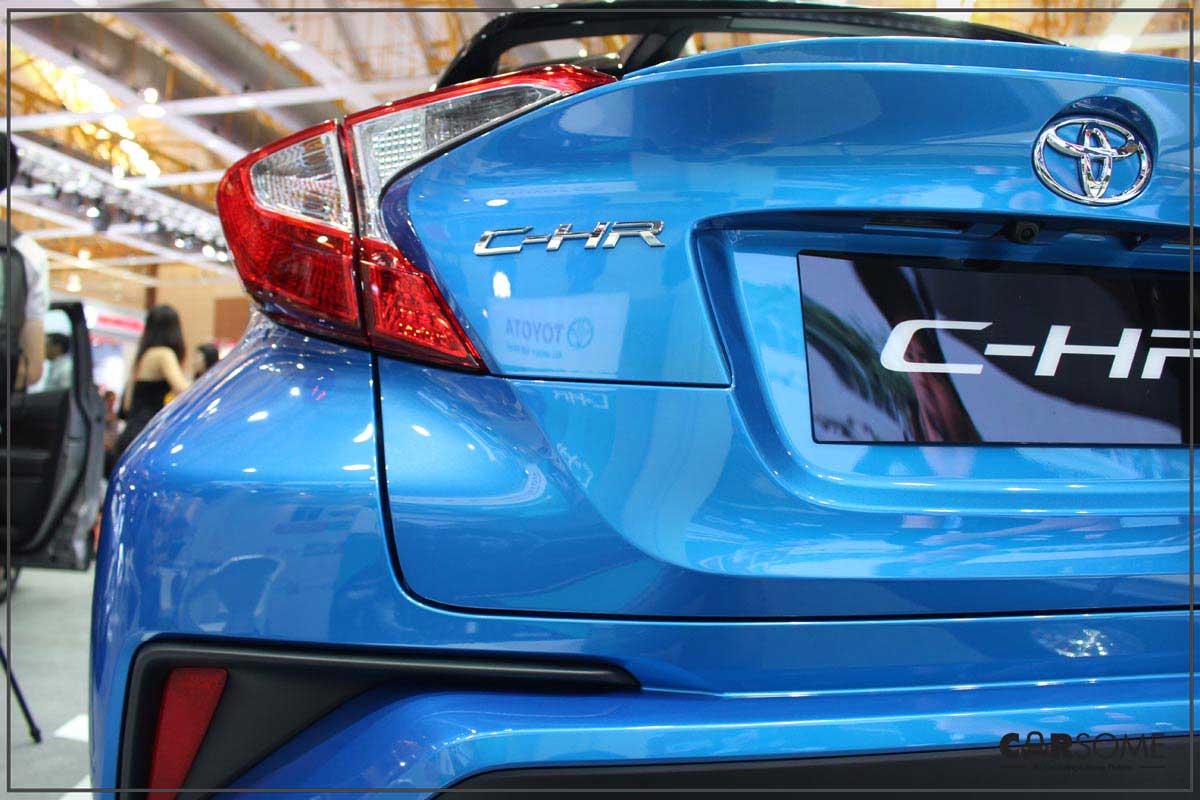 When the Toyota C-HR was first previewed back in August, it gained attention unlike no other. The modernised scuffed looks of the C-HR may well be one of the main attractions of the Autoshow. What’s interesting to know is the Blue Metallic C-HR seen here will be for the local market, CBU imported from Thailand. The similar Follow-me-home Headlights, along with a Side Mirror Puddle Light is something we mentioned when we did a sneak peek months earlier. Power? Most likely the  1.8-litre 139 hp engine will be offered. UMW Toyota will launch the C-HR next year. 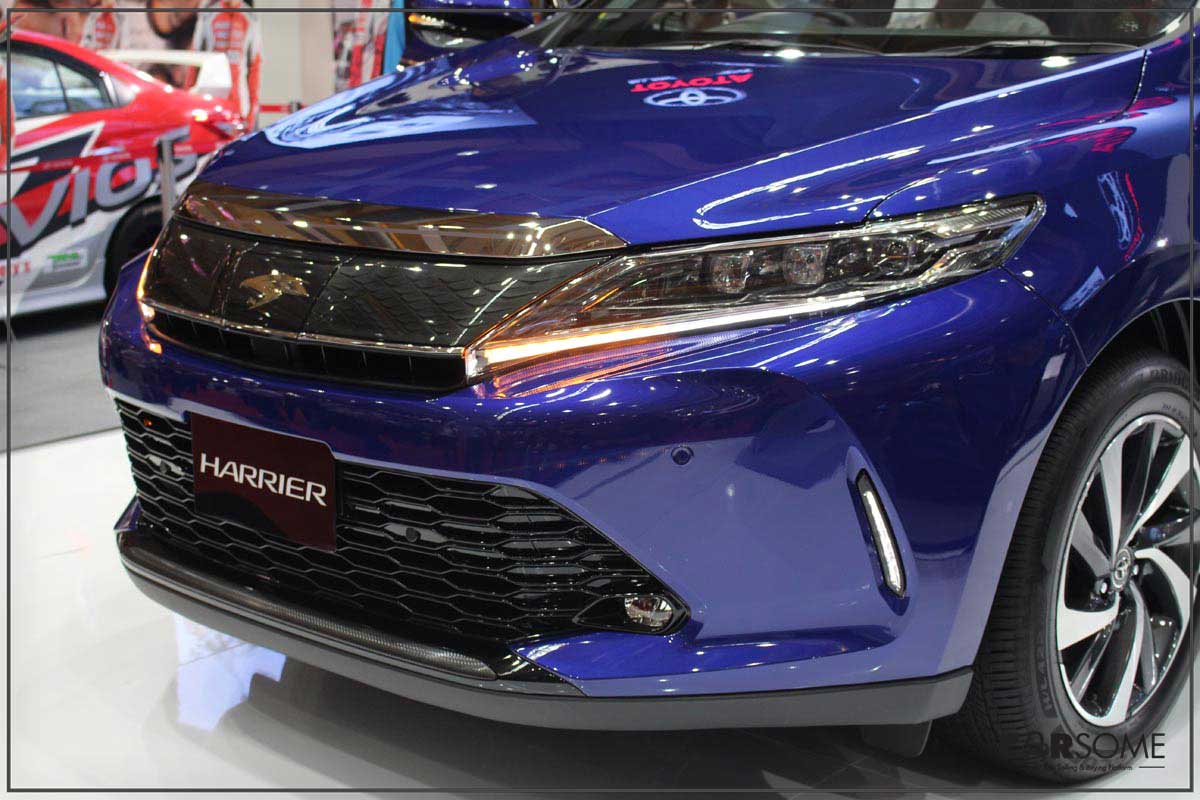 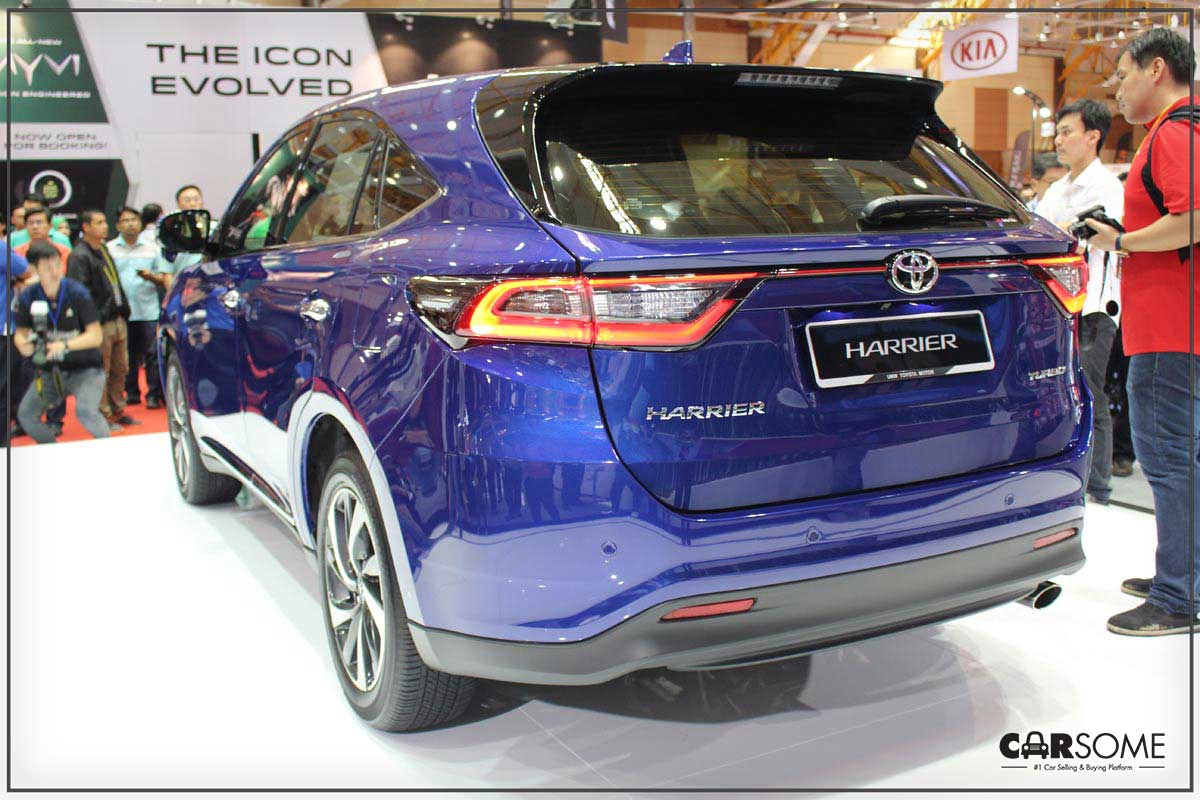 You’ve probably seen the Harrier on our roads as it is available through the grey market, but with this, UMW Toyota has upstaged those by offering a more powerful variant, a 228 hp version with 350 Nm of torque from 1,650 to 4,000 rpm. You’ll also get LED headlights with dynamic indicators (a la Lexus), LED DRLs on the outside and more. Toyota Safety Sense comes as standard here, and will include adaptive cruise control, and pre-collision system to look after you on roads. Two variants of Premium and Luxury will be available, at RM 238,000 and RM 259,000 respectively and will come with a five-year unlimited-mileage warranty. 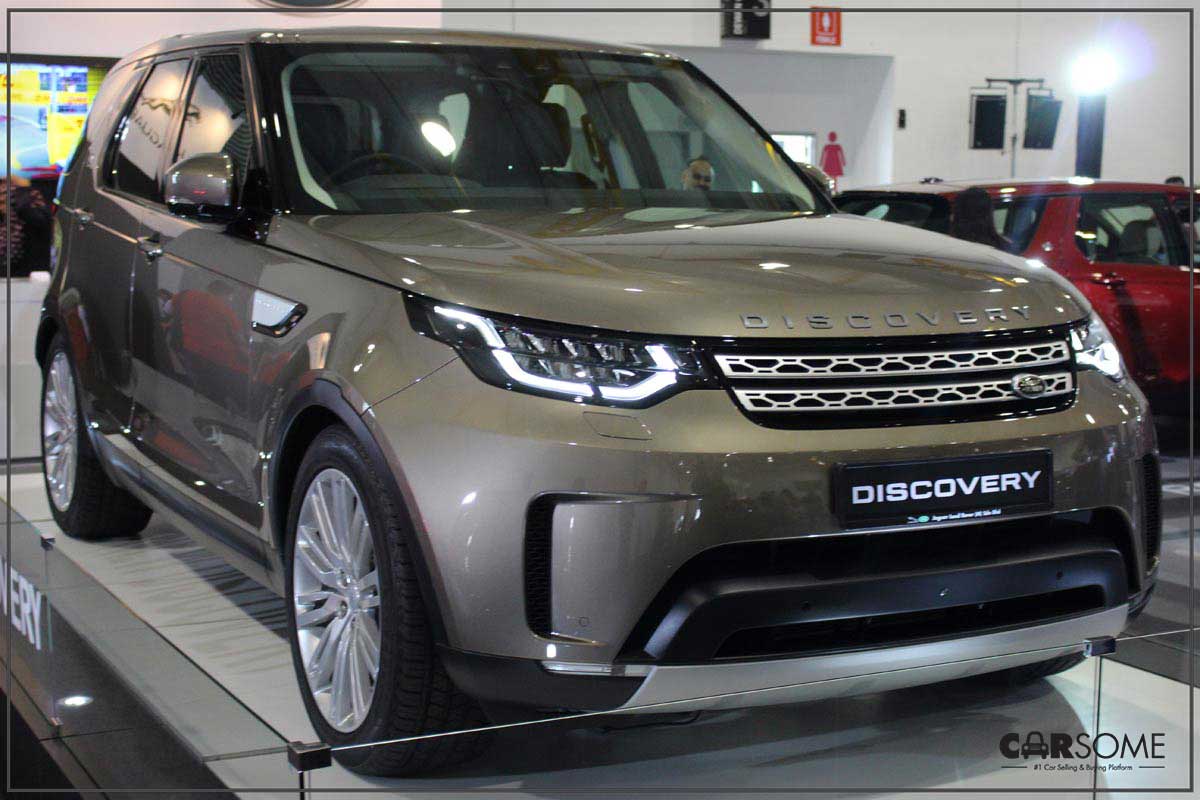 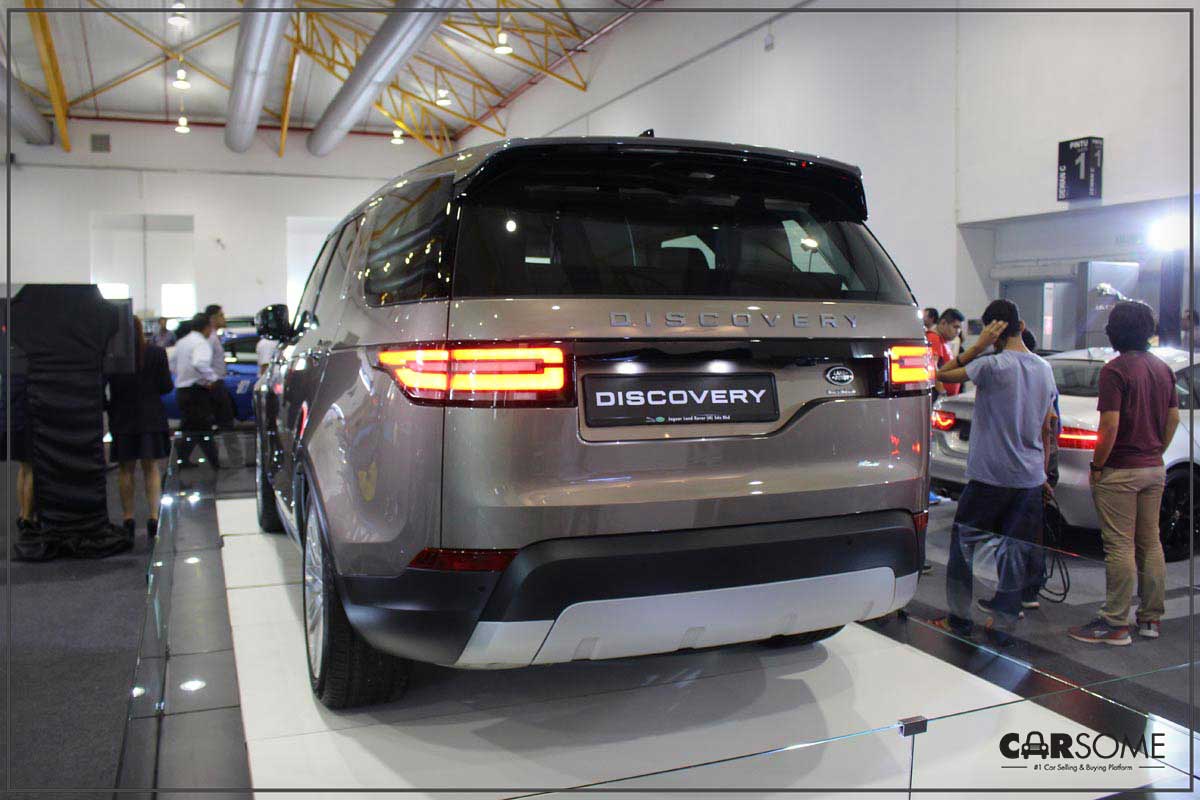 The fifth-generation Land Rover Discovery makes an appearance here, in its 3.0-litre turbo V6 diesel  Td6 HSE trim producing 254 hp and 600 Nm of torque! The seven-seater SUV is quite a majestic vehicle thanks to its size, and has the brand’s interesting InControl remote that allows the user through an app, to control the SUV’s Intelligent Seat Fold remotely. Stay tuned as Jaguar Land Rover Malaysia will bring this in officially early next year. 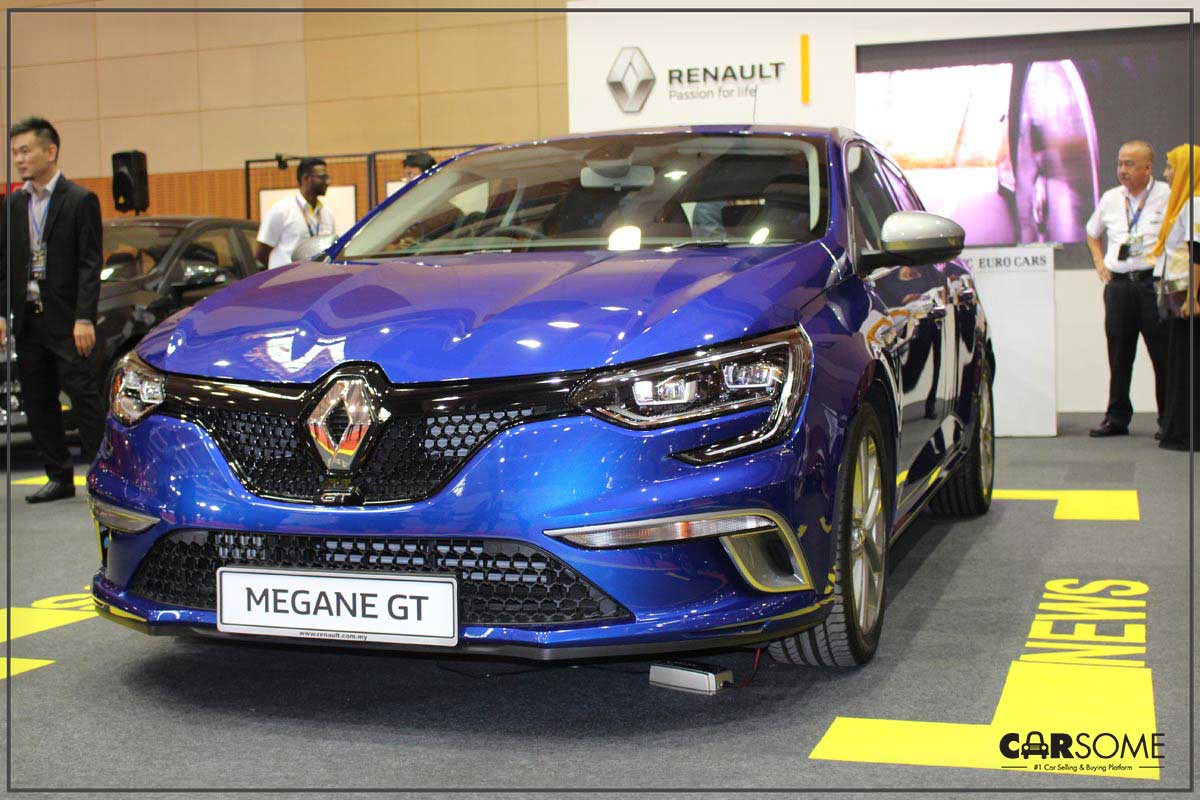 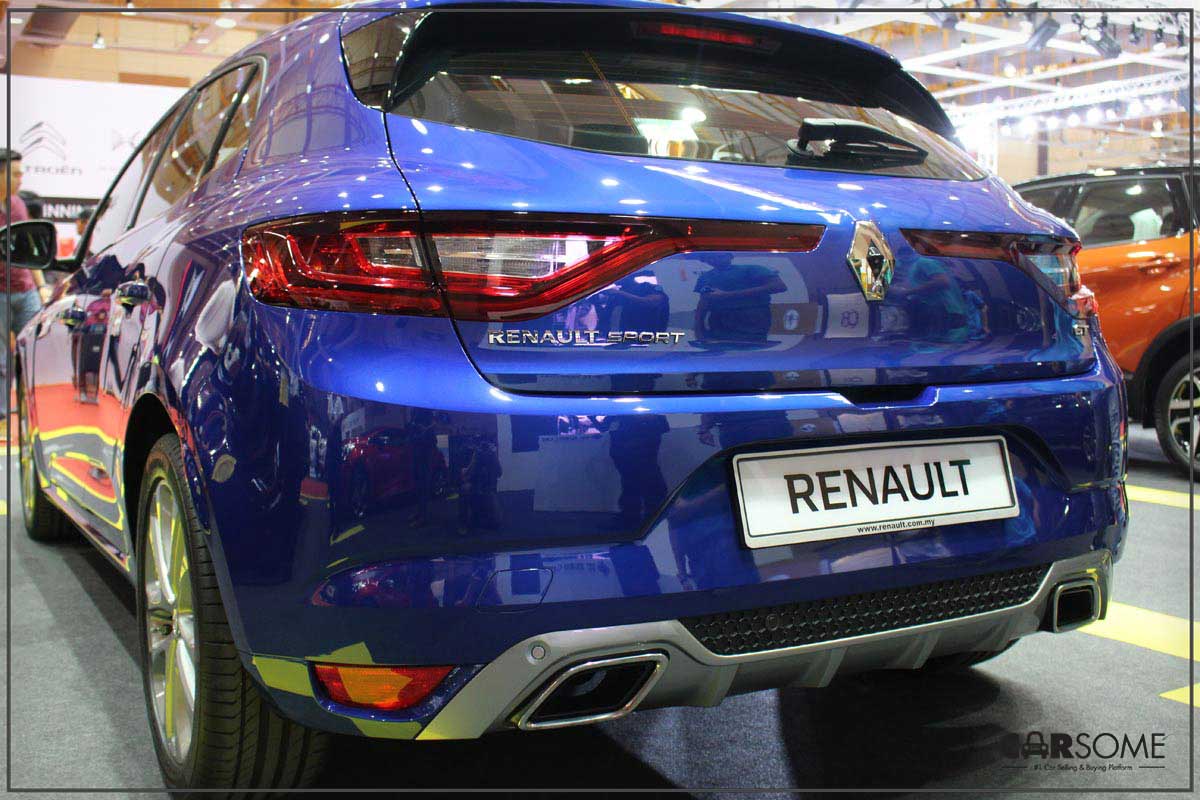 The Megane GT makes a preview here at the Autoshow, and will be making rounds at select Renault showrooms after. This GT version is powered by a 1.6-litre turbo engine churning 202 hp and 280 Nm of torque from 2,400 rpm, paired with the Efficient Dual Clutch (EDC) transmission. Visitors will be able to see the Megane GT’s new Renault identity, ‘GT’ badging throughout and just plain French good looks. 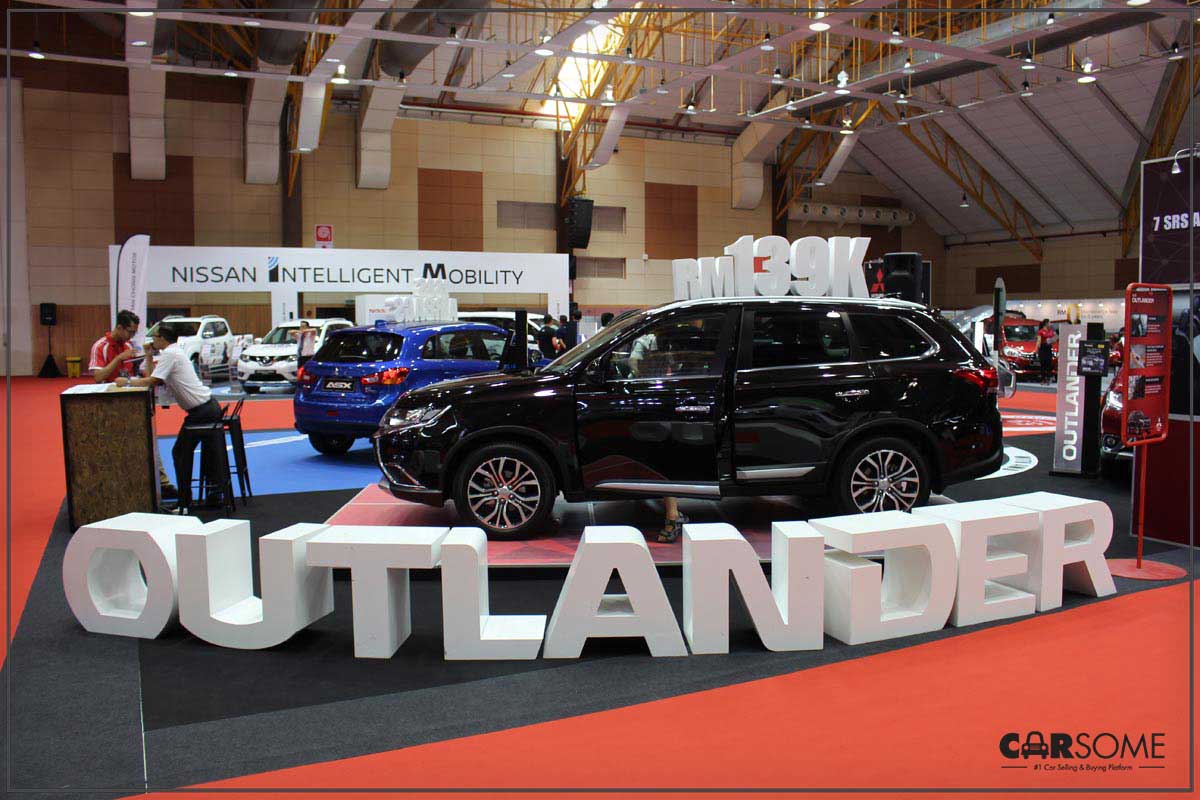 The Outlander 2.0 is currently the cheapest 4WD SUV you can buy in Malaysia with the price of just RM 139,988 until the end of 2017. This Outlander SUV has 3 drive modes namely the 4WD ECO, 4WD AUTO and 4WD LOCK to suit various road conditions. This base model has a 2.0 litre four-cylinder engine that fires up with 143 hp and 196 Nm of torque, this sets up as the perfect family vehicle which provides optimum safety with seven airbags, ABS and EBD safety features. 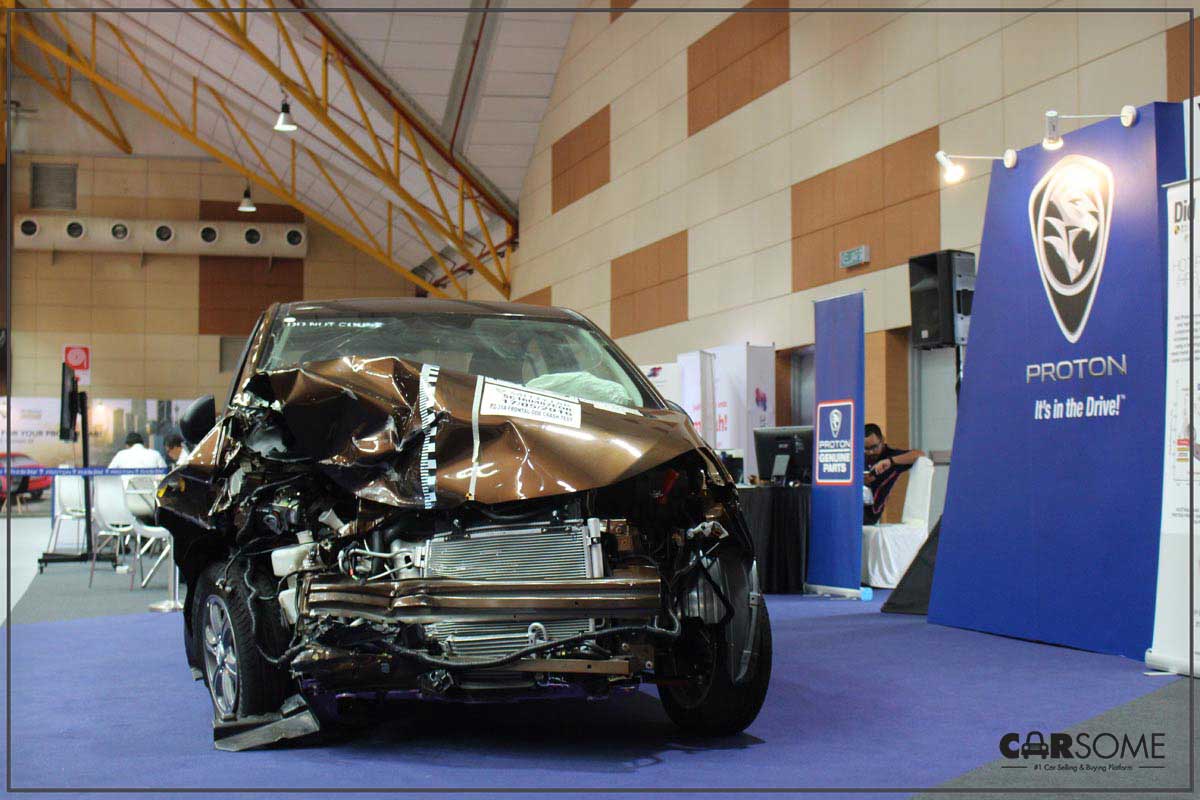 Visitors will be able to see something unique from Proton. The brand has put together a few of their Persona’s in its skeletal frames to showcase the secure structure of its vehicles that utilizes Hot Press Forming (HPF) technology. This technology produces high tensile strength parts for ultimate security, while retaining ideal weight of a vehicle. 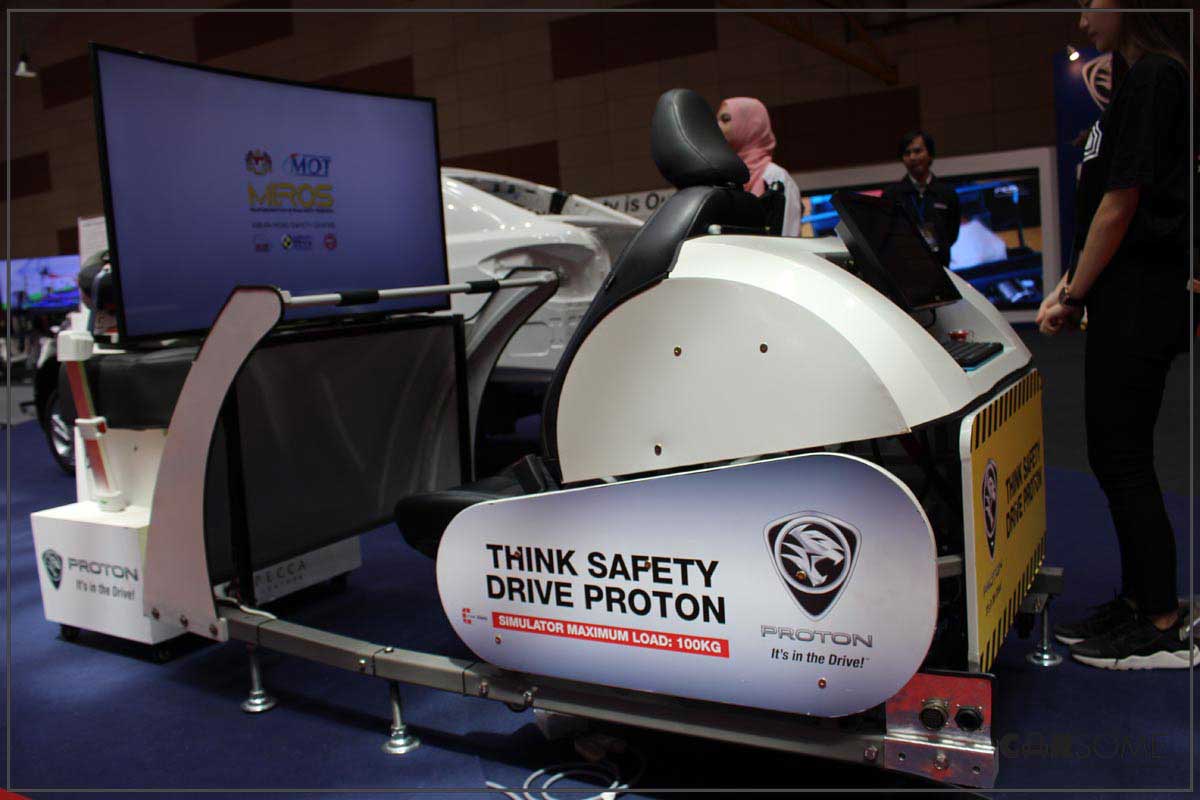 There is an ESP (electronic stability program) on and off system which allows a passenger to have a virtual experience sitting in a Proton car that showcases the safety systems.

Apart from the brand’s mentioned, Boon Siew Honda will have a section on bikes where fans can check out Honda BigWing motorcycles. Nissan, Hyundai, and Peugeot has their range of cars on display including the stunning 3008 SUV. Mercedes-Benz will showcase their AMG vehicles including the C63 S and GLC 43 AMG, Hall C will showcase a few supercars and classic wheels from the early days, as well as aftermarket parts from Hall D!

Head on there, and share with us your experience in the comments!

If you missed out last year's Malaysia Autoshow, click here to check it out!

Click here for Five Crazy Ideas to Raise Money for your Dream Car!

Looking to sell your car? Why not try Malaysia's 21st century way of selling your car the fast, fair and free way!