What is: G-Vectoring Control (GVC)

The local sports car scene last week was treated to a new excitement in our market in the form of the new Mazda MX-5 RF. But it wasn’t the fastback alone that was introduced to wet the masses’ appetite. Also, tucked in the shadows of the event’s main feature, were the updated inventory of Mazda’s line-up which now comes with G-Vectoring Control (GVC), the first technology in the SKYACTIVE – VEHICLE DYNAMICS series.

Before that, it’s beneficial to back track and understand how all this came about; through Mazda’s relentless pursuit and strict adherence to the concept of Jinba Ittai. It is an ancient concept that loosely translates to the symbiotic relationship between a man and a horse – an approach that Mazda has adopted and implemented into their fleet to achieve a feeling of unity between man and machine.

Jinba Ittai is a unique, driver-centric approach that focusses on providing a holistic and connected driving experience. Controlling the vehicle should be as easy and almost second nature as if it were an extension of your body; a “oneness” with a Mazda is achieved, whether accelerating, braking, turning or merely cruising.

As part of the evolution of Jinba Ittai, Mazda also looked into the smooth transitions between G-forces when braking, turning and accelerating, which leads us to GVC – a system which will be found in the latest Mazda 3, Mazda 6 and CX-3 in Malaysia. 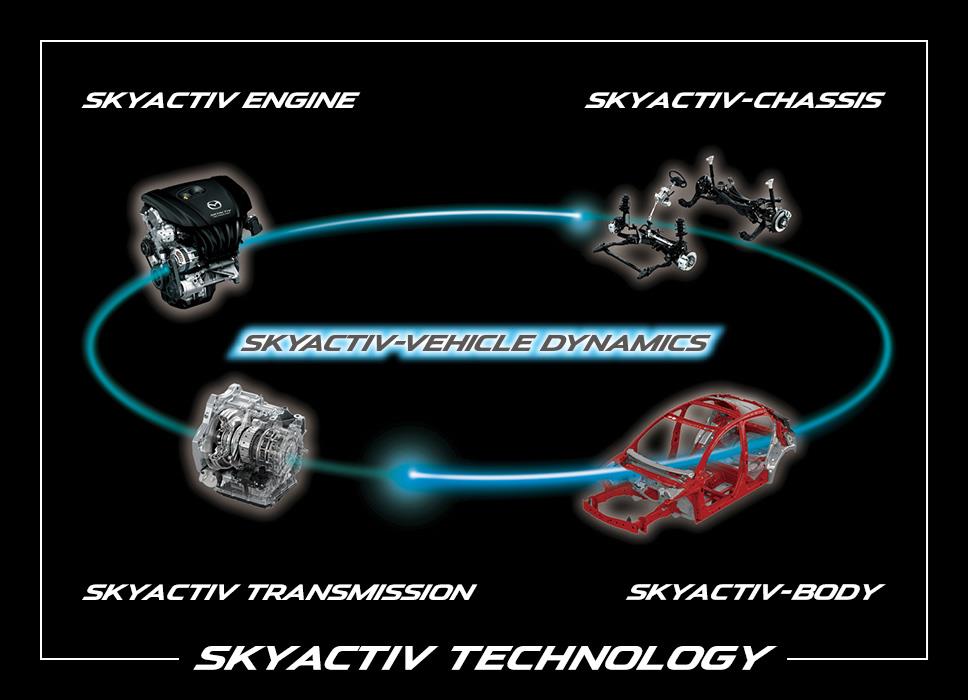 G-Vectoring Control or GVC is the world’s first technology to adjust engine torque in tandem with steering inputs for both to operate in a unified way; ensuring smooth and efficient vehicle behaviour with optimised vertical load on each tyre. As such, the vehicle reacts more precisely to the intentions of the driver without the need for sudden and rigorous steering corrections.

While GVC may seem to place emphasis on control and assurance behind the wheel, it’s benefits also extend to the passengers, in that smooth transitions between turning, braking and accelerating G-forces, prevents torso-sway which in turn reduces fatigue, improves ride and passenger comfort. GVC also sorts to provide more assurance with improved stability and handling on wet roads.

So how does this sorcery of a system work then?

GVC’s operation revolves around maximising tyre performance by focussing on the vertical load of it. When the driver turns the steering, GVC steps in by controlling engine torque to generate a deceleration G-force, which shifts the load to the front wheels, increasing the grip on the front tyres resulting in enhanced turn-in response.

On the other hand, when a driver maintains a constant steering angle, GVC would recover the engine’s torque which transfer the load to the rear wheels instead to provide stability. These load transfers extracts and utilises much more grip from the front and rear tyres which would translate to improved vehicle responsiveness and stability.

Because of the nature of GVC, it prevents the irregularities and undulations of the road surface from affecting the driver’s control and anticipation of the vehicle whether if its driven in a straight line or through a bend. Even if unexpected corrections are needed on the steering wheel angle, GVC can significantly reduce the angles and frequency of steering correction as it is very responsive to the slightest of steering wheel movements.

Reduced Fatigue for Both Driver and Passengers

By smoothening the transition between G-forces, say from when you decelerate upon approaching a corner, turning in and accelerating out of it, GVC reduces the swaying of the head and body as most would normally experience when a vehicle is going through the said motions. This would enable drivers and passengers to enjoy a more comfortable, drama-free ride.

With GVC improving handling and stability by optimising vertical load on the tyres, it allows for greater tractions in tricky driving conditions and evasive manoeuvres. That said, in any given situation, the system consistently provides an enhanced feeling of traction for the tyres on the road for a greater sense of security.

Or read about how much it actually cost to own a car in Malaysia here!