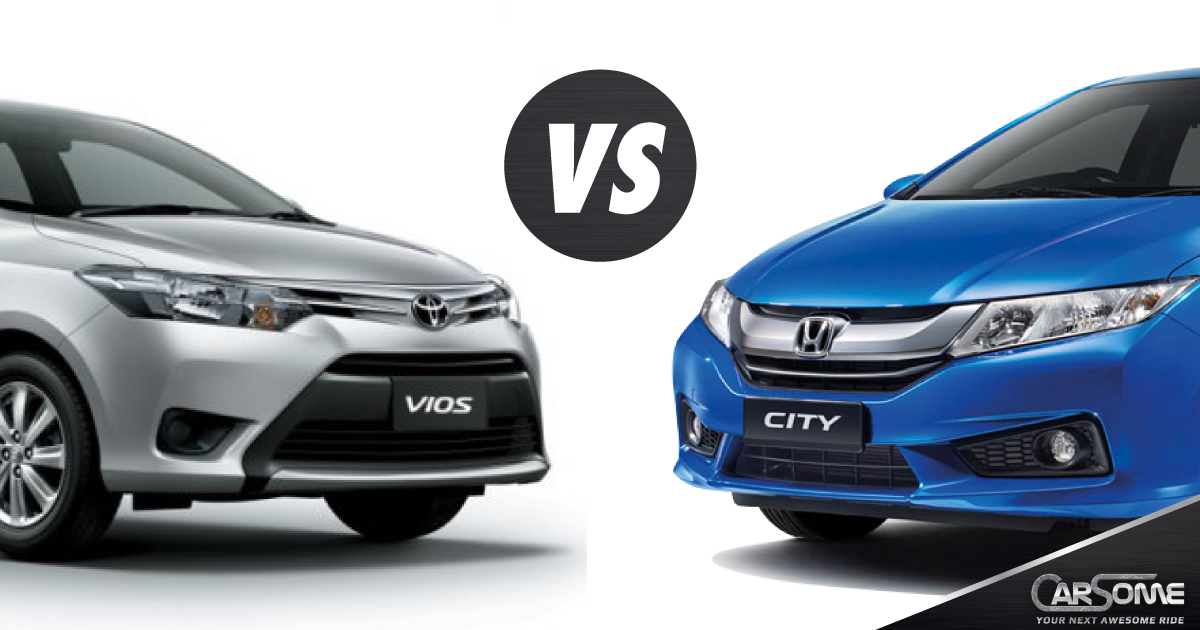 In a competition of the B-Segment sedans, you’d have to put the Honda City and the Toyota Vios in the ring. Like a pair of brothers in rivalry, these two models have dominated the market with their looks, interior space and reasonable price. They’re the cars you think of when looking for a B segment sedan with huge interior and boot space. But the question is, which comes out of the ring victorious in a battle? Which car deserves the crown? We list down the pros and cons of each car, and compare them so you can decide.

The City powerplant is paired to a CVT gear box whereas the Vios is mated to a traditional 4 speed automatic gear box. Not that we are complaining, as the Vios powerplant and transmission has worked brilliantly despite it being handed down from the first generation of Vios.

It is difficult to determine the winner in this segment as Vios provides better fuel economy while sacrificing on power. On the other hand, the Honda City houses a more powerful engine with a higher fuel consumption. As both are meant to be city cars, we’d give this category to the Toyota Vios for an engine better made for day-to-day city driving.

2) Interior Design
Both models don’t offer much in their base variants. The City 1.5 S comes with an amber illumination display for the meter whereas Vios 1.5 J Spec gets a white illumination display. In terms of space, the City beats the Vios with more rear passenger legroom as well as a huge boot space. Both City S and Vios J do not come with the 60:40 rear folding seats offered on higher variants.

As for the dashboard design, the Vios has a floating centre console which gives the interior a premium touch. As for the City, the centre console is tilted towards the driver for ease of access on the head unit. Good for the driver, bad for the front passenger in the case of deciding who selects the music. Despite that, the City dashboard has modern touches such as a brushed silver trim across the dashboard and three oval shaped meters.

The City wins this segment with bigger interior space and boot space.

3) Comfort and Handling
In terms of handling, we’d say straight up that the City 1.5 S has better handling compared to the Vios 1.5 J Spec. Vios has more body roll on corners and doesn’t feel as stable as City especially on the highways. Toyota cars are more focused on road comfort rather than handling. Hence, the NVH level in the Vios is lower compared to the City. City has louder road noise intrusion into the cabin. However, the noise isn’t too uncomfortable for its passengers.

Despite Vios 1.5 J Spec’s better refinement overall, the City 1.5 S takes the prize for its balance between comfort and handling.

4) Gadgets
Toyota recently has announced the implementation of keyless entry and push start button systems across all variants for the Toyota Vios. The Honda City retains its key fob system. The City only gets the 1-DIN player, compared to the 2-DIN player fitted on the Vios. As for the wheels, Honda City offers only steel rims with covers instead of alloy wheels, making the City cheap looking from the outside. The Vios comes with 15 inch alloy wheels as standard across the range.

Overall, the Vios scores higher in the gadget segment.

5) Safety
As standard, both City S and Vios J come with only 2 airbags and ABS as standard. There is no hill start assist or electronic stability control present in the base variant.

As of 1st of June 2015, Toyota has added a Toyota Premium Security Solar Film to be fitted as standard across the range for Toyota Vios.

It’s a draw for both models in the safety department.

Part 2: Toyota Vios 1.5 E Spec and Honda City 1.5 S+
Moving up a step to the second most affordable variants, we compare the Vios E Spec and City S+ Spec.


1)    Engine and Fuel Efficiency
Both models have the same engine as the base variants, so we’re going to have to give this to the Toyota Vios.

With that, Vios wins this segment.

3)    Comfort and Handling
Again, both models retain their handling characteristics from the base variant; the Honda City takes home the prize.

With its added features, the City tops the Vios in this segment.

5)    Safety
Again, we have the same features as the base variants, where both models have only 2 airbags and ABS. So, we’ll have to put them in a draw.

As of 1st of June 2015, Toyota has added a Toyota Premium Security Solar Film to be fitted as standard across the range for Toyota Vios.

1)    Engine and Fuel Efficiency
Both models retain the same VVT-i and i-VTEC engines respectively, so again we have the Toyota Vios coming out on top.

2)    Interior Design
Along with the new keyless entry and push start button system fitted for the Vios, the interior theme for Vios G was changed from beige color to black color. It’s a refreshing change from the pale and old fashioned beige. As for the City E, the rear seats finally get the 60:40 folding split seats for extra boot space when necessary.

3)    Comfort and Handling
Both cars have the same comfort and handling, so the Honda City takes home the prize.

4)    Gadgets
In the mid spec variant, both the Vios G and City E get electric folding mirrors as standard. Tight spots are not a problem, and you don’t have to worry about forgetting to manually fold them or push them open. Both cars have audio control on the steering wheel. The City E spec gets the keyless entry and push start button system as standard in this variant.

As of 1st June 2015, Toyota has updated the specifications for Vios G and TRD Sportivo. Toyota has added a DVD-AVN 7” Touchscreen Display with navigation, reverse camera and multimedia functions as standard without any additional cost.

We’d go with the Toyota Vios G in this segment due to the addition of the multimedia touchscreen headunit.

5)    Safety
Even in this mid-range variant, the Vios has only 2 airbags and ABS fitted as standard. For the City E, it’s upgraded with Vehicle Stability Assist, Hill Start Assist alongside with ABS and 2 airbags as standard. The City E also comes equipped with a feature called ‘Emergency Stop Signal’. Under emergency brake conditions, the system will activate the hazard lights to warn drivers in the rear.

With all the extra stuff, the City E wins the round.

Part 4: Toyota Vios 1.5 TRD Sportivo and Honda City 1.5 V
For the last part of this comparison, we will compare between Vios TRD Sportivo and City V which are the top of the line variants for both models.

1)    Engine and Fuel Efficiency
We have the same engines across the variants, so we’ll award this category to the Vios TRD Sportivo.

2)    Interior Design
The Vios TRD Sportivo gets upgraded to leather seats with red stitching and TRD Sportivo embroidery logo on the both the front seats. The City V variant only comes with black fabric material. Both City V and Vios TRD Sportivo get a leather wrapped steering wheel which enhances grip for the driver.

Despite the Vios TRD Sportivo’s leather seats, the City’s fabric material offers better comfort after your car’s been roasted out in the Malaysian sun. Meaning, they don’t roast your rear end every time you take your car out for a drive.

We give this segment to the Honda City V.

3)    Comfort and Handling
Aside from the same handling characteristics for both the model throughout the variant, City V gets upgraded with 16 inch alloy wheels instead of 15 inch. This stiffen the rides a little bit but it doesn’t affect much on the ride comfort.

4)    Gadgets
Despite the Vios TRD Sportivo being a top of the line variant, most of the upgrades are on the cosmetic side.  You get the TRD Sportivo bodykit, leather seats and alloy wheels but no upgrades on the equipment. The City V however, gets major upgrade in terms of equipment. For a price tag that’s lower than the Vios TRD Sportivo, you get cruise control, 7” touchscreen display with HDMI port and 2 USB port, single zone automatic air conditioning with touch panel controls.

As of 1st of June 2015, Toyota has updated the specifications for Vios G and TRD Sportivo to be fitted with Toyota DVD-AVN 7” Touchscreen Display with navigation and reverse camera with multimedia functions as standard without any additional cost.

5)    Safety
The Vios gets 2 airbags and ABS as standard across all variants. For City V, you get 6 airbags, earning a 5 Star ASEAN NCAP rating.

City wins again in this segment.

Conclusion
Overall, we prefer the City over Vios mainly because of the lower price tag. A lower price tag doesn’t mean you lose out on equipment in this case. When comparing on a variant to variant basis, the City is better equipped than the Vios especially in the safety segment. You also get bigger interior space and a larger boot for travelling comfort and convenience.

What are your thoughts on both cars? What segments or comparisons would you like us to explore next? Tell us in the comments!

Want to compare both the Toyota Vios and Honda City, spec-for-spec? Click here to get a comparison now.